The controversial Gare Pelma sector 2 mine is owned by MAHAGENCO, and the mine developer and operator is Adani Enterprises.

The protest on September 27 outside the venue of the public hearing. Photo: Special arrangement

New Delhi: Residents of 56 villages in Chhattisgarh protested against proposed coal projects in their region on Wednesday last week. Three coal projects in the Tamnar region of Raigarh district will impact these villages, requiring a diversion of a total of 6,802 hectares of land – equivalent to 23,500 football fields.

Thousands of residents – men, women and children – gathered in the village of Pelma for the protest. They dug up coal from the region and deposited it at the district office as a symbol of their protest.

“We don’t want any coal mining in our area no matter who is doing the project – be it a state company or a private company. They are only here to exploit our land and we are ultimately the losers,” said Harihar Patel, a resident of Gare village.

“The whole of Tamnar will be gone if these coal projects go ahead as per planned. Chhattisgarh has seen several coal projects and knows that there is no benefit for them. These are only used by companies for their own benefit at the cost of the residents,” said Savita Rath, a social activist based in Raigarh.

Residents of Tamnar have been holding a ‘coal satyagraha’ every year on October 2 for the last eight years in opposition to the proposed coal projects in the region. The three mining projects which they are currently opposing are Gare Pelma sectors 1, 2 and 3. 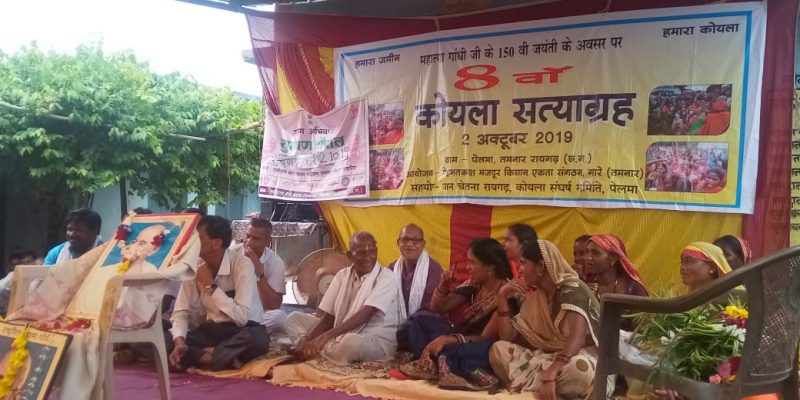 The job of developing and operating the three mines as the mine developer and operator (MDO) rests with Adani Enterprises. As merchant coal mining is not open to private sector companies, they have entered the mining sector through the MDO route, taking up the key role on behalf of the owners of the coal block in question.

Thus, the tasks of land acquisition, mine planning, development, operation, coal extraction and transportation rest with the MDO – Adani Enterprises in the present case.

Last week, residents had also protested against the public hearing held for Gare Pelma sector 2 mine owned by MAHAGENCO, for which the MDO is Adani Enterprises. This was the third try at conducting the public hearing after two previous failed attempts. The public hearing was held on September 27 and locals have alleged that it was stage managed by representatives of the Adani group and MAHAGENCO. Neither company has chosen to respond to questions from The Wire about these allegations.

“Around 5,000 people from all 14 villages which have been impacted by the project gathered at the spot where the public hearing was to be held and boycotted the meeting. Our intention was to ensure that nobody goes inside the venue of the hearing. But, representatives of Adani and MAHAGENCO, helped by the local administration and the police, sneaked in some people into the hearing. We don’t know who these people were and whether they were from any of the villages. But they were paid off by the companies,” Shivpal Bhagat, a resident of Sarasmal, alleged in an interview to The Wire. 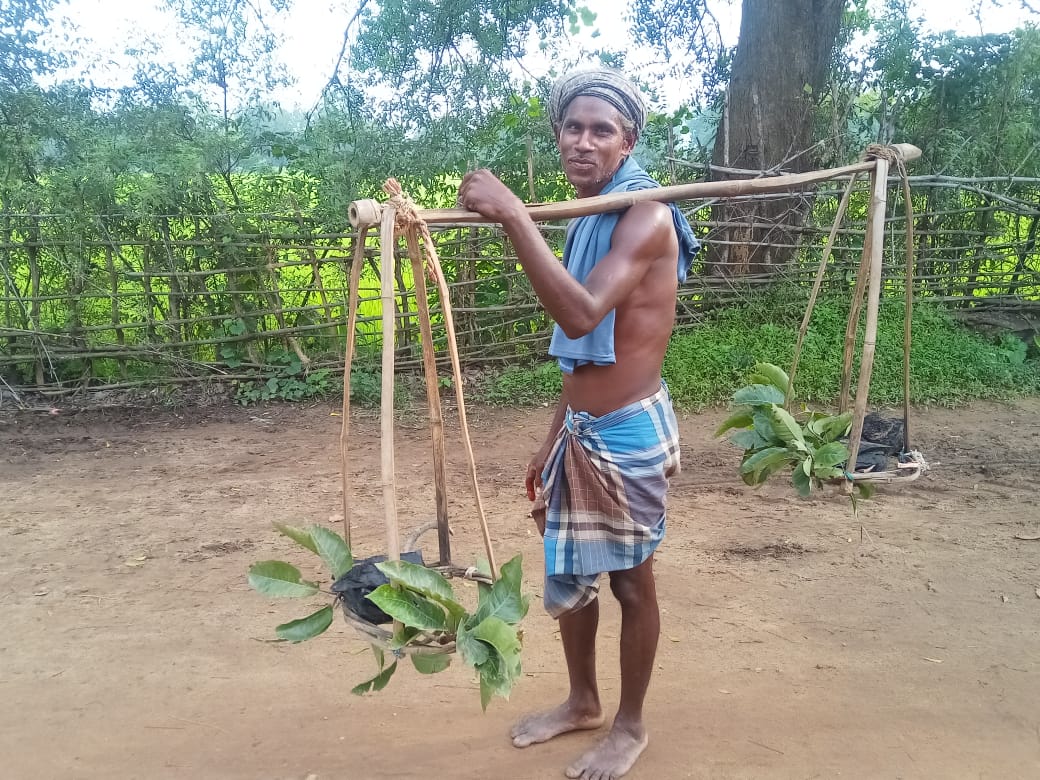 A local carrying coal as part of the satyagraha on October 2. Photo: Special arrangement

The Wire spoke to nearly a dozen locals ranging from those directly affected by the project to activists and journalists who also provided the same testimony, differing only on the number of protestors.

“Even if the mine is owned by MAHAGENCO, the entire operation on the ground is being carried out by Adani,” said Rajesh Tripathi, a local activist. He alleged that consent was “manufactured” even when a majority of the people oppose the project.

Another activist, Ramesh Agrawal, who has been awarded the prestigious Goldman Environmental Prize, was present for a part of the public hearing. “Inside, most of the officials, were from MAHAGENCO, as per my knowledge. The few people I recognise from the Adani group were not present. But they were present outside the venue,” he said.

Agrawal also explained the reason for the people’s opposition to the public hearing itself. “There are eight coal mines in Tamnar operated by different companies… They have acquired land forcibly without compensation, not done any rehabilitation work, indiscriminately polluted the environment causing health issues and not done any of the promised work under CSR. So, people here have seen this model of development. They want nothing to do with it,” he told The Wire.

Also read: Exclusive: Pollution Norms – That All Power Plants Except Adani’s Were Complying With – Diluted

Tamnar has constitutional protection, being a tribal area, as notified under Schedule 5 of the Indian constitution. “Because this is a schedule 5 area a social impact assessment should have been conducted by the company before the public hearing. Even that has not been done. They have straight away held the public hearing,” he charged.

A public hearing is a key step in the way of a project obtaining environmental clearance. The views of the people who are affected by the project are recorded in the hearing.

These are subsequently submitted to the Expert Appraisal Committee in the Ministry of Environment, Forests and Climate Change (MoEF), along with the environment impact assessment and other documents. The committee then decides whether or not to grant the project an environmental clearance.

According to the minutes of the public hearing, which The Wire has seen, 59 people spoke at the hearing of which 57 expressed support for the project, while two opposed it. But locals insist that the people who spoke in support do not represent the voice of the affected people of Tamnar, a majority of whom oppose the project.

“There were around 3,000 people outside who were opposing the project. So, how can they say that people are for the project even if 57 people have said that they support?” asked Savita Rath, the activist.

Of the 59 people who spoke at the public hearing, 36 were from only one village – Dolesara. Two of these people – Tulsi Nishad and Raju Patnayak – spoke against the mine, and were the only ones at the hearing to do so, as per the minutes.

They expressed concerns about air pollution and loss of land. They also mentioned that it was with great difficulty that they could come in to express their views inside the premises where the meeting was taking place.

“I feel that I have come here after crossing a border. We should be allowed to express our views. It is our fundamental right,” said Nishad at the meeting, as recorded in the minutes.

“More than a thousand people are outside. They are not being allowed to come inside. People with lathis (sticks) are stopping them at the gate. I request that the people who are outside be allowed to enter and their views be recorded,” said Patnayak.

The minutes also record the same person as having spoken twice in support of the project. Suresh Kumar of Dolesara spoke twice, once as the 2nd speaker and a second time as the 48th speaker.

Of the 14 villages that are impacted by the project, 8 went unrepresented at the hearing, according to the minutes. 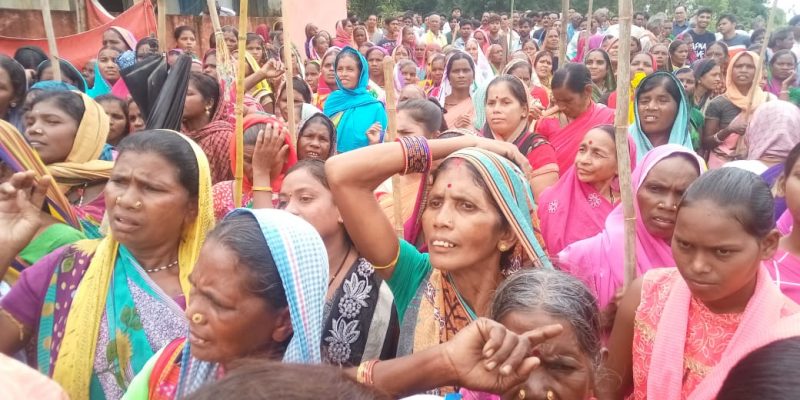 The protest against the September 27 hearing. Photo: Special arrangement

The Wire has also seen video footage of the public hearing and a majority of those who spoke in favour of the project, read out from a piece of paper and expressed their support using the same sentence. “MAHAGENCO ka samarthan karta hun (I support MAHAGENCO)”.

Some people who spoke in favour also elaborated and said that the company has brought tangible benefits to the villages in their area through its Corporate Social Responsibility (CSR) activities – primary schools, health facilities and women self-help groups, in particular.

The minutes also state that around 1000 people were present inside the venue of the meeting. This is not borne out by the footage which shows a few people sitting inside the premises surrounded by members of the security forces with large swathes of empty spaces.

This figure is also disputed by Agrawal. “There were only around 30 or 40 people inside the venue. Thousands were outside who were opposing the project,” he said.

Agrawal does not contest the minutes of the meeting where they list 59 people who spoke at the hearing. “It is possible that the total number was 59. Maybe they spoke before or after I was there,” he said.

The residents have now said that they will appeal to the MoEF to quash the public hearing itself. “We will approach the courts also if there is need to do that. We will not allow this or any other coal project to come in to Tamnar,” said Harihar Patel.

We have sought comments from the Adani group and Maharashtra State Power Generation Company. This story will be updated if they respond.