Though never questioned by the governments at the Centre and state, the binding nature of the Assam Accord is now under a cloud of doubt. 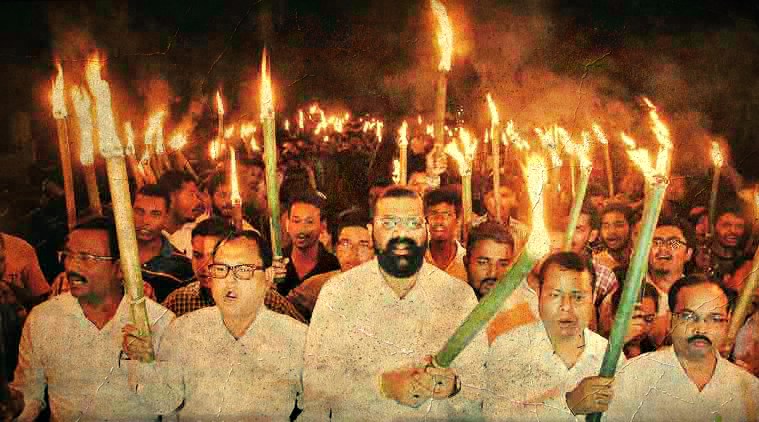 A protest against the Citizenship (Amendment) Bill. Credit: PTI/Files

The Illegal Migrants (Determination by Tribunal) Act, 1983 (IMDT Act) was enacted with the ostensible objective of detecting foreigners in Assam. While addressing the question of its constitutional validity, the National Democratic Alliance government under late Atal Bihari Vajpayee said in an affidavit before the Supreme Court in Sarbananda Sonowal vs Union of India:

“…large scale illegal migrants from Bangladesh have not only threatened the demographic structure of the area but have seriously impaired the security of the nation … The need for expeditious identification of illegal migrants is more pressing now than ever. It is not a matter of dealing with a religious or a linguistic group. It is a question of identifying those who illegally crossed over the border and continue to live in India contrary to the Indian law and the Constitution.”

On July 12, 2005, the Supreme Court struck down the Act as unconstitutional and found that “… the IMDT Act and the Rules … have been purposely so enacted or made so as to give shelter or protection to illegal immigrants who came to Assam from Bangladesh on or after March 25, 1971, rather than to identify and deport them.”

Thirteen years later, when concerns pertaining to the demographic structure of Assam on account of illegal immigration were raised by the Joint Parliamentary Committee (JPC) seized with the task of examining the Citizenship (Amendment) Bill, 2016 (the Bill), the Ministry of Home Affairs of the present NDA Government did a volte face and took the following stand:

“There is no specific report on whether the refugee migrant population from Bangladesh is causing unexpected demographic changes of certain North Eastern States. The amendments are applicable to specific class and these people have been living in these areas since long.”

The Bill, for the first time seeks to make immigrants, who may have been considered illegal till now, eligible to apply for citizenship. Such migrants need to be either Hindus, Sikhs, Buddhists, Jains, Parsis or Christians who have fled from Afghanistan, Bangladesh and Pakistan on account of religious persecution and have entered India on or before December 31, 2014.

Further, the Bill, if enacted into a law, would also:

(i) abate all proceedings that may be pending against such victims of religious persecution to determine if he is an illegal immigrant and;

(ii) reduce the qualifying period to apply for citizenship on the ground of naturalisation from 11 years to six years. None of these consequences could have followed if the government had even a little regard for the original cut-off date of March 25, 1971 as agreed in the Assam Accord.

Before the Bill was introduced in Lok Sabha, notifications dated September 7, 2015, and July 18, 2016, had brought amendments to the Passport (Entry into India) Rules, 1950 by introducing Rule 4 (1) (ha) which read as follows:

“4. (1) The following classes of persons shall be exempted from the provisions of Rule 3:

(ha) persons belonging to minority communities in Afghanistan, Bangladesh and Pakistan, namely Hindus, Sikhs, Buddhists, Jains, Parsis and Christians who were compelled to seek shelter in India on or before the 31st December, 2014

i) without valid documents including passport or other travel documents; or

ii) with valid documents including passport or other travel documents and the validity of any such document has expired:

Provided that provisions of this clause shall take effect from the date of publication of this notification in the Official Gazette.”

Rule 3 of the said rules restrains entry into India of any individual without possession of a valid passport issued by the country of which he or she is a national. However, the newly inserted Rule 4(1)(ha) grants exemption to victims of religious persecution. Such exemption has been applied to the whole of India including Assam without acknowledging that on account of illegal influx of immigrants into Assam from Bangladesh, a different set of laws and cut-off dates have been made applicable in Assam to determine who is an illegal immigrant.

The Assam Accord, a one of a kind of “Memorandum of Settlement”, records various clauses which are preceded by the words “… it has been decided to proceed as follows…”. Though never questioned by the governments at the Centre and state, the binding nature of the Accord is now under a cloud of doubt. The state government seems extremely happy to not question the deviation by the Centre from its solemn assurances under the Accord. The governments of India and Assam were signatories to the Accord along with All Assam Students Union (AASU), All Assam Gana Sangram Parishad and the prime minister of India.

The Department of Legal Affairs of the Ministry of Law and Justice submitted before the JPC that the Bill appears to be contrary to the Assam Accord. However, according to the Legislative Department of the same ministry, nothing restrains the Legislature from ignoring the cut-off date of March 25, 1971 because section 6A of the Citizenship Act, 1955 which provides for “special provisions as to citizenship of persons covered by the Assam Accord,” is silent in so far as citizenship of illegal immigrants of Assam who have entered the state after March 25, 1971 are concerned.

What the Legislative Department has clearly failed to note is that the Assam Accord was placed before both houses of parliament on August 16, 1985, when the Citizenship Amendment Act of 1985 was enacted. In fact, much before even the Assam Accord was signed, when the IMDT Act was enacted on December 25, 1983, the parliament had acknowledged the relevance of the cut-off date of March 25, 1971.

Though the Act was struck down as unconstitutional by the Supreme Court after finding that it was enacted to give shelter to illegal migrants instead of identifying and deporting them, the intention of the legislature was unambiguous while defining illegal immigrant, in section 3 (1) (c), to include only foreigners who “entered into India on or after the 25th day of March, 1971.”

Recent efforts to constitute a high powered committee to suggest ways for implementation of Clause 6 of the Assam Accord, which contemplates safeguards for the cultural, social, linguistic identity of the Assamese people, only adds to the confusion surrounding the Government’s stand on the Assam Accord.

The inevitable consequence of the Bill, if enacted, would be that every immigrant who came to Assam after March 25, 1971 would get a fresh lease of citizenship if the government is of the view that such immigrant was a victim of religious persecution and is not a Muslim. If enacted, it could also derail the entire process of updating the National Register of Citizens (NRC) which is being monitored by the Supreme Court since 2015 and which considers March 25, 1971, as the cut-off date.

When asked by JPC about the manner in which the government intends to verify the claims of religious persecution in a foreign land by such immigrants, the Ministry of Home Affairs submitted that the government would verify claims of religious persecution through (i) inputs from Security Agencies and; (ii) corroborative evidence from the print/electronic media. Surely, such a mechanism, would offer a lot of scope for misuse by any government while conferring citizenship.

Besides, if all illegal immigrants from March 25, 1971 to December 31, 2014, now apply for citizenship on the pretext that they were victims of religious persecutions, our security agencies would be faced with a daunting task of conducting investigation in foreign lands to verify claims of persecution which may go back in time by a few decades. Needless to say, in the era of fake news, reliance on corroborative evidence from the print/electronic media is equally ridiculous and ambitious.

The government’s plans of doing away with the cut-off date which has stood the test of time for more than three decades and which was unconditionally accepted by the Centre and the state government of Assam has been a cruel betrayal of the people. The Assam Accord was the outcome of a long and bitter agitation against illegal immigrants in Assam which kept the entire region on the edge.

Large stretches of vacant lands in Assam have a long history of attracting encroachers and cultivators from across the border from the densely populated Bangladesh. Nehru was of the view that immigration was an inevitable consequence of economic necessity and to make the region wealthier, immigration may even be desirable. However, Congress leaders like Gopinath Bordoloi, the first chief minister of Assam, was always at loggerheads with such views and would often oppose the high command and would highlight the adverse impact which immigration had on the demography of Assam.

But that was a different time and era. Now, as put beautifully by a minister of the present government, in the context of reservation for the poor within the general category, it is all about sixes in the slog overs.

Abir Phukan is a Delhi based Advocate practising in the Supreme Court of India.