FIRs Against Soni Sori, Bela Bhatia After Doubts Raised on 'Encounter' Which Killed 2

The activists have been accused of having violated the Model Code of Conduct when they went to submit their report on the deaths of two alleged Maoists in a police encounter.

Raipur: The Congress government in Chhattisgarh has lodged an FIR against tribal rights activist Soni Sori and Bastar-based academic and researcher Bela Bhatia under Section 188 (disobedience to order duly promulgated by public servant) of the Indian Penal Code.

The FIR was lodged on September 16 at Kirandul police station of Dantewada district. The activists say the purpose of the FIR is to counter their support for villagers who have been suspicious of the circumstances under which the September 13 encounter with alleged Maoists took place.

Two members of the Malangir Area Committee of the CPI (Maoist) organisation were shot dead by the Chattisgarh police. Podiya Uike and Lacchu Midiyami each carried a reward of Rs 5 lakh. An official said they had fired on police personnel first.

Besides the two women activists, FIRs have been lodged against Nanda, the sarpanch of Kirandul village, her husband Bhima and against 150-200 villagers who on September 16 reportedly assembled near the Kirandul police station along with the two activists.

Also read: When the Naxals Speak Your Language

Sori, Bhatia and two women of the village had gone to the police station to submit a report on the September 13 incident.

The administration lodged an FIR about the encounter on September 15 at around 16:20. The same official quoted above said “an extraordinary confusion” lay behind the delay in registering the FIR.

The FIR, a copy of which is in the possession of The Wire says, “On getting the information about the presence of Maoists group near the jungles of Kutrem, Madkameras and Samalwar villages part of Kirandul police station, a team of the police porce was sent to Hirauli, Kutrem, Gumiyapal, Madkameras and Samalwar villages. The team was conducting a search operation when at around 23:30 hrs the Maoists opened fire when they saw police team coming very close to them (sic).”

The FIR further says that the police personnel appealed to them to surrender but the suspected Maoists kept on firing. The police team then took position and opened fire in retaliation, the FIR said. 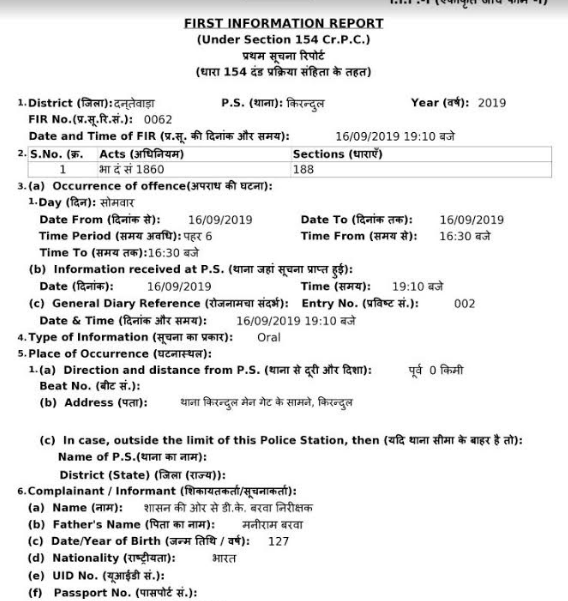 A section of the FIR against Soni Sori, Bela Bhatia and others.

The FIR held that when the alleged Maoists found it difficult to face the bullets of the police, they escaped under the cover of darkness. As it was not possible to conduct a search operation in the night, the police force cordoned off the area till morning, the FIR further said, adding that at dawn, they conducted a search operation and found the bodies of two Maoists who were identified as Podiya Uike and Lacchu Midiyami.

Bela Bhatia first raised suspicions about the encounter and the death of the two on being fired upon by district reserve guards (DRG) personnel. The villagers also alleged that the two had in fact been murdered by the forces.

Bhatia is a social activist and scholar who has often endured threats and even attacks by state-backed vigilantes. Soni Sori, meanwhile, has been an unrelenting and vocal critic of police violence and brutality towards tribals in Chhattisgarh.

On September 15, the two activists visited the place where the alleged encounter took place. 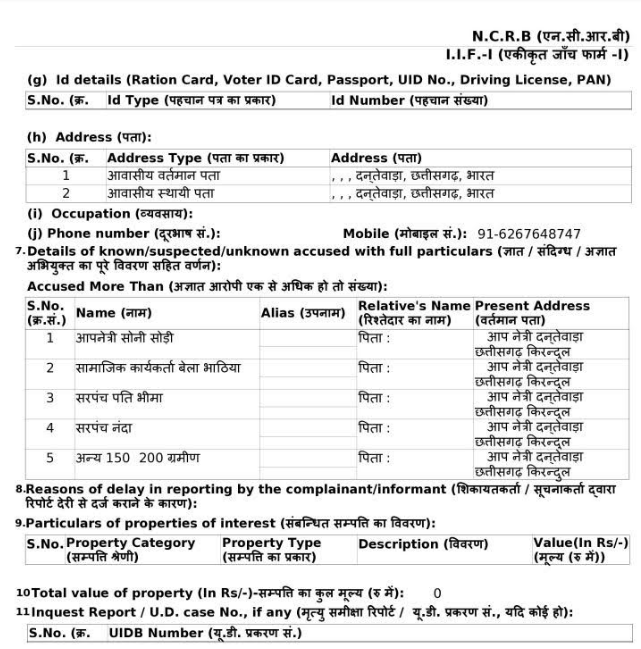 A section of the FIR that names Soni Sori, Bela Bhatia and others.

“Actually, we wanted to submit the report to the police on September 15 itself, but we didn’t do so as the bodies of the two villagers who were shot dead in the alleged encounter by the police were in the village and had not been laid to rest by the villagers,” Bhatia said over the telephone.

She said that it was distressing that the police chose to lodge an FIR at a time when the activists were seeking justice for villagers who doubted the genuineness of the September 13 encounter.

“It’s basically a counter FIR by the administration against us,” Bhatia added.

Ahead of the by-election which will be held in the Dantewada assembly constituency on September 23, the Model Code of Conduct is in play. Besides, the district police has imposed Section 144 of the Code of Criminal Procedure (CrPC), which prohibits the assembly of five or more people at one place for the maintenance of public order and peace in the assembly segment.

The FIR against the two activists and villagers says that a group “surrounded” the Kirandul police station, where they raised slogans that violated the Model Code of Conduct and breached Section 144.

The by-election has been necessitated following the demise of BJP legislator Bhima Mandavi in a Maoist attack in April this year.