"We were very inspired by what is happening in Shaheen Bagh," one woman said. "If they can fight so hard, why can't we?" 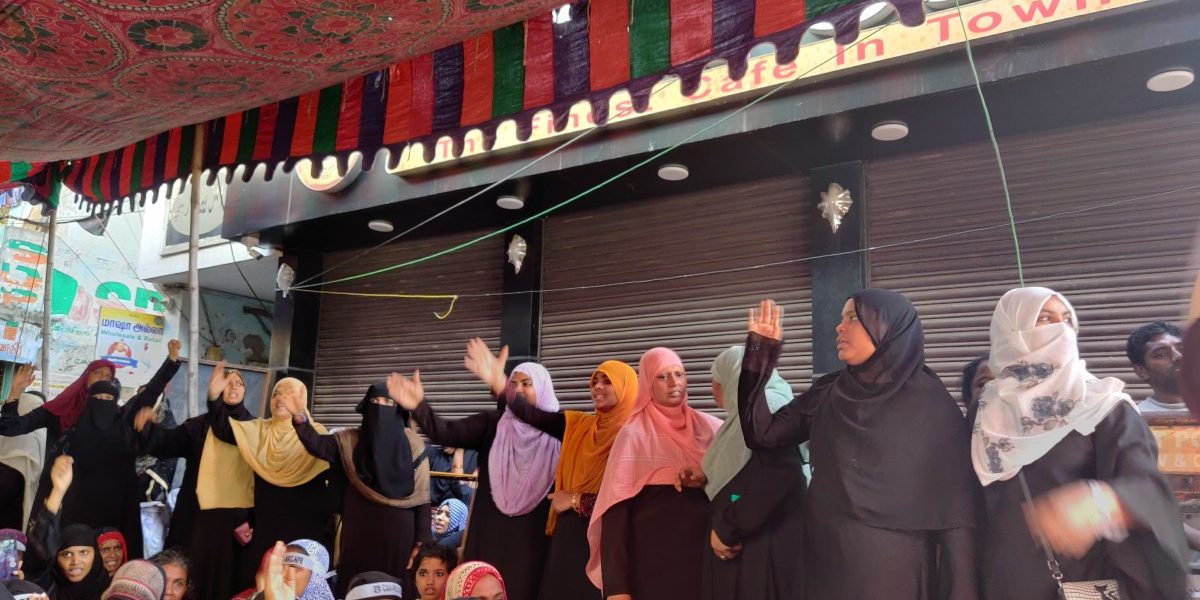 Women in Washermanpet protesting against the CAA on February 15, 2020. Photo: Author provided

Chennai: Her son is in class V and his exams are scheduled for Monday, but that’s the least of Shamitha’s concerns now. On an ordinary day, she might have been fretting over it, but today was no ordinary day, Shamitha has no idea how long the abnormal state of affairs would last.

“Let them declare that the Act has been withdrawn and you will not see a single soul here,” she told The Wire. Until then, she added, the streets would be “full” of protestors. Shamitha is among a few thousand woman sitting on the narrow streets of Washermanpet, a locality in North Chennai, protesting the Citizenship (Amendment) Act (CAA) 2019. The women clearly outnumber men at this protest, as everywhere else in the country at the moment, and appear more determined. It was their decision to hit the streets.

When the women occupied the streets on Friday evening after offering their prayers, the backlash was immediate. The Chennai police allegedly lathi-charged them and abused them in vulgar terms, the women said. The violence triggered spontaneous protests across Tamil Nadu demanding that the government act against the police. Opposition leaders, including M.K. Stalin and Kanimozhi of the Dravida Munnetra Kazhagam (DMK), K.S. Alagiri of the Congress and Thol Thirumavalavan of the Viduthalai Chiruthaigal Katchi, among others were quick to condemn the police.

Kanimozhi demanded action against Kapilkumar Saratkar, an IPS officer and the joint commissioner (north) whose “wrong move led to the violence.” She also pointed out how he had been the deputy inspector general of police at Thoothukudi when police personnel opened fire against people peacefully protesting the actions of the Sterlite copper smelting plant in May 2018, killing 13, and wondered out loud how he had been allowed to stay on.

The women of Washermanpet, now dubbed ‘Chennai’s Shaheen Bhagh’, remain undeterred however. “The police did try to intimidate us on Friday but CAA and NRC are even more intimidating to our existence here,” a bunch of them said. “We will not disburse until we know for sure that the Act will be withdrawn, come what may. We were very inspired by what is happening in Shaheen Bagh [in New Delhi]. If they can fight so hard, why can’t we?”

This is not the first time the women of Washermanpet have spontaneously begun a sit-in protest. Two weeks ago, when they had gathered in large numbers, the police had asked them to disburse promising to find an alternative site for the protests. “It didn’t happen; the police wanted us to protest at day and go back home by night. We are protesting for our lives, livelihoods, for our dignity. How can we make it a 9-to-5 thing?” Shamitha said. With no options left, they decided to “randomly fill the streets again” on Friday after namaz, and brought blankets and saris from their homes. “All of us are worried that our future is at stake,” Farzana, resident of Washermanpet, said. “We have never felt so intimidated, our existence so threatened in our own country.”

The protest was a reaction to the pall of fear and gloom shadowing them. “We are genuinely worried and afraid that we will be asked to leave this country. But why? What was my mistake that I should leave this place, which is my mother land as much as others’? I don’t know any other place than the streets of Washermanpet, “Shamitha added. “We have always lived here, and from here we will protest.”

“This is not our fight alone, and not just a fight that Muslims have to wage. If it is us today, it will be you tomorrow”.

Tehlan Bhagvi, national vice-president of the Social Democratic Party of India, said, “The women are very determined; they are clearly influenced by Shaheen Bagh.” The organisers of protests around the state have demanded, among other things, that the state assembly should pass a resolution against the CAA and the NRC. However, Bhagvi thinks even such a resolution might not actually persuade the women to go home. “They want to take this protest to its logical conclusion.”

Meanwhile, the Chennai police has been trying to reach out to the organisers in a bid to defuse the tension. A.K. Viswanathan, the commissioner of police, met a section of Muslim leaders in Chennai on Saturday to discuss further course of action.

M.H. Jawahirrullah, leader of the Manithaneya Makkal Katchi and who was present at the meeting, said, “The commissioner said [violence] was an aberration and that the police had always wanted to adopt a non-confrontational approach to the protests. We have conveyed to him that the protests will continue until the state assembly passes a resolution against the CAA, the NRC and the NPR. The least the state can do now is to show that they are with us.”

Police officials The Wire reached out to for comment refused to respond, however.

Chennai’s Shaheen Bagh seems only to be starting. Women sat through the night preparing their dinner on the streets while men went about regulating the traffic around the area; as the night wore on, the tricolour rose into the night sky here and there, surrounded by slogans against the CAA. “This is our new normal,” Parveen, a 48-year-old woman injured during the alleged lathi-charge earlier, said. “We will not stop protesting. We realise how dangerous this Act is for us. It is better to live on the streets now than to live in fear in our homes.”