In particular, almost the complete northern part of the state will come under BSF, which many perceive as an attempt by the Centre to help BJP gain an upper hand in the sensitive region that has already become a ground for intense political battle. 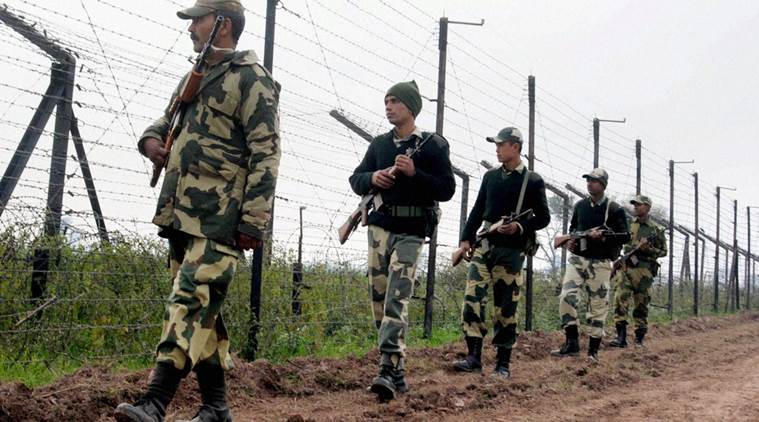 Kolkata: The recent amendment in the Border Security Force (BSF) Act extending India’s prime border protection force’s jurisdiction to 50 km from the international borders with Pakistan and Bangladesh in the states of West Bengal, Punjab and Assam – an increase of 35 km from the existing limit of 15 km inside the border – will bring nearly one-third of West Bengal, and most parts of the geopolitically sensitive northern Bengal, under the jurisdiction of the BSF where they will be able to conduct searches and make seizures and arrests without intimating the local police.

This will bring several major towns including Siliguri in north Bengal that is not only the state’s second-most-important city after Kolkata but also considered the gateway to the northeast as well as Nepal and Bhutan, under the jurisdiction of the BSF, which functions under the ministry of home affairs headed by Amit Shah.

West Bengal with the longest share of international borders among all states – 2,216.7 km of border with Bangladesh – is likely to have the biggest impact of this change. The entire eastern boundary of the state goes along Bangladesh and the BSF’s access will extend to Kurseong in the Darjeeling hills to the Sunderbans along the Bay of Bengal. 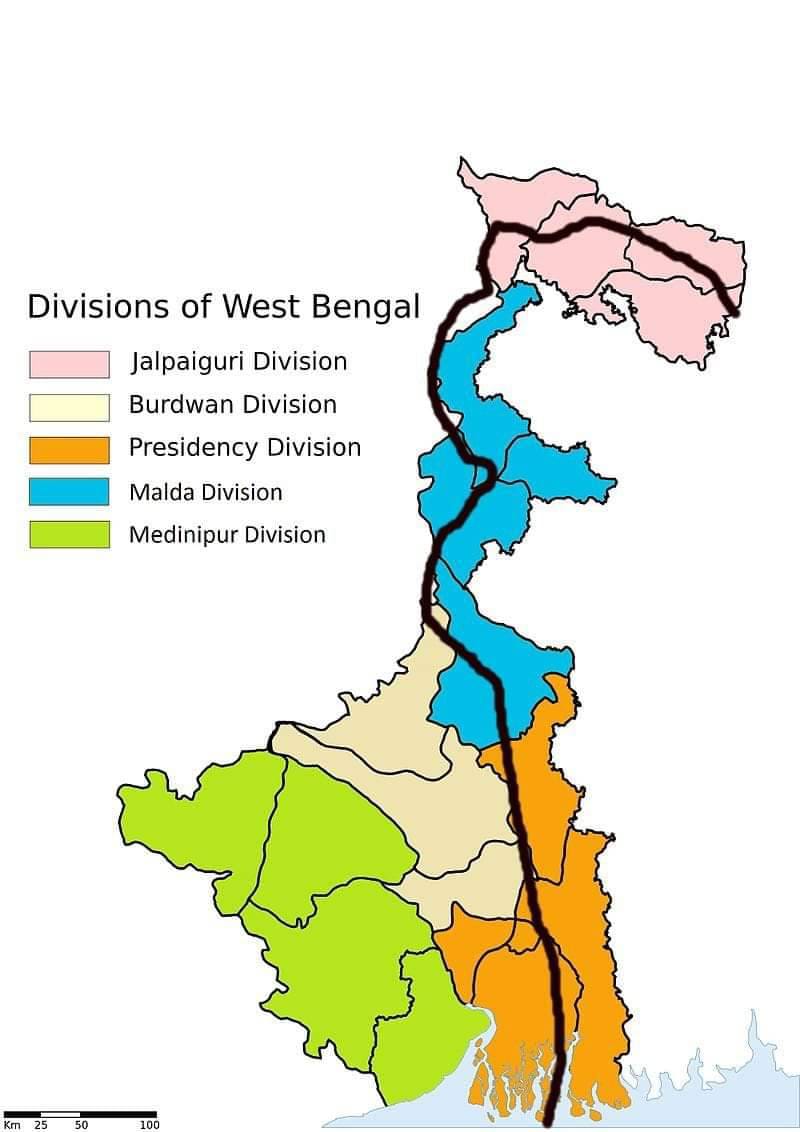 Of West Bengal’s 23 districts, 10 share a border with Bangladesh. Of these, the large majority of the districts of Cooch Behar, Jalpaiguri, Uttar Dinajpur, Dakshin Dinajpur, Darjeeling, Malda, Nadia and Murshidabad will come under the BSF’s jurisdiction, apart from two-thirds of the state’s largest district, North 24-Parganas and roughly one-third of South 24-Parganas.

Together, these districts account for 21 of the state’s 42 Lok Sabha seats.

“Almost all major towns of Bengal’s Bangladesh-bordering districts come within this 50 km limit, including several district headquarters,” said TMC Rajya Sabha chief whip and national spokesperson Sukhendu Shekhar Roy. “There are reasons to apprehend that this unilateral decision of the Centre has some hidden agenda, as they have not been able to offer a logical explanation as of now.”

However, while Punjab chief minister Charanjit Singh Channi outrightly opposed the Union government’s move, branding it as an attack on the principle of federalism, West Bengal’s ruling party’s response has been more measured. Their main point of opposition is the procedure – why the Union government did not consult the state before taking this decision.

“If it’s in the national interest, they should have consulted the state. India is not a unitary form of government, it’s a union of states. But the Union government made no attempt to take the states concerned into confidence. We will oppose it when it’s placed in the Parliament for approval,” said Roy.

“In complete contrast to the apex court’s judgment, here the Centre is ensuring its armed forces supplant and act as a substitute of the state police and there has come no question of cooperation with the civil administration of the state. It’s a unilateral decision that would harm India’s federal structure,” said Roy.

Meanwhile, Union minister of state for home affairs Nisith Pramanik, who is from the Cooch Behar district of West Bengal, said that he did not see any reason why the state government should have any objection.

“The BSF’s jurisdiction can be changed to strengthen internal security and border security. No exception has been made to West Bengal. The same is being done in Assam and Punjab keeping national security on focus,” Pramanik said.

Of the eight districts in northern Bengal, only the Sikkim-bordering hill district of Kalimpong and the Bhutan-bordering Alipurduars in the foothills will not come under the BSF jurisdiction. Both of them are tiny in size.

Of the rest, there are only a few tiny patches of land in the Cooch Behar district of northern Bengal that are 50 km away from the international border with Bangladesh. The district is bounded by Bangladesh to the south and parts of east and west, leaving only some areas in the northern and northeastern parts of the district that are beyond the 50 km limit.

Jalpaiguri, bounded by Bangladesh to the southwest, also has the international border lying just about 5-10 km outside the southeastern border of the district, beyond a slim strip of land belonging to neighbouring Cooch Behar. Most of the parts of Jalpaiguri, except for some areas towards its north, come within the 50 km range.

Almost no part of Uttar Dinajpur district is beyond 50 km. The widest part of the district is towards the south – from Radhikapur along the Bangladesh border to Khirabari along the Bihar border – and it’s just about 50 km in a straight line.

No part of northern and southern Malda is beyond 50 km from the Bangladesh border. It is only the central-western part of the district, bordering Bihar, which lies beyond 50 km.

North Bengal coming mostly under the BSF’s purview is also being seen as a politically significant development, as the region is turning into a ground for an intense political battle with the BJP giving a special focus on this region than rest of Bengal after its relatively better performance in the region in the assembly general elections held six months ago.

Apart from several BJP leaders raising the demand for a separate state of north Bengal, this region also received special treatment from the Union government in the June reshuffle. Four MPs from the state got a ministerial berth and two of them are from north Bengal, which is only one-fifth of the state. The party recently also chose an MP from north Bengal, Sukanta Majumdar, as the state unit president. In Nadia, of the two of the widest parts of the district, the one from Ballavpara to the west to Hridaypur to the east is roughly 50 km in a straight line and the other one from Gede in the east to Nabadwip in the west is about 55 km. The district headquarters, Krishnanagar, is within the 50 km range from the international border.

In North 24-Parganas, India’s second most populous district, several large towns like Habra, Ashoknagar and Basirhat will be coming under the BSF’s new jurisdiction. This move is going to have a significant political impact in the coming days, expect political observers, as the state is already in the middle of a rather bitter battle with the Union government, with the state’s ruling party making frequent allegations against the Union government for the alleged abuse of central agencies to intimidate the state’s ruling party leaders and bureaucrats.

The state government recently told the Supreme Court that the CBI was registering cases without seeking the state’s permission, despite the state withdrawing its general approval to the CBI for taking up cases within the state borders.

“As of now, they were using the Enforcement Directorate and the Central Bureau of Investigation (CBI) to intimidate our leaders. Now, the BSF will join the bandwagon. Don’t be surprised if you see, within a few months, our leaders at the grassroots level getting arrested by the BSF on charges such as drug, fake currency or cattle smuggling,” said a TMC Lok Sabha MP who did not want to be identified.

Members of the civil society in the state have also mostly criticised the Centre’s decision but from different perspectives.

Human rights activist Kiriti Roy, who heads the NGO, MASUM, which has been working in the Bangladesh-bordering areas since the late 1990s, has registered a protest by writing a letter to the national human rights commission. Roy alleged that “the BSF daily violated the constitutional provision of the country in the name of security”, and he further feared that the instances of torture, false cases, arbitrary detention and illegal arrests would increase.

Roy said that in the last five years they had lodged a total of 240 cases accusing the BSF of extra-judicial torture, 60 cases of extrajudicial execution and eight cases of forced disappearance. Of these, in 33 cases, the National Human Rights Commission (NHRC) has recommended compensation to the victims or to their next of kin.

“We have a number of cases where BSF did not inform local police after firing incidents. There are instances when they apprehend some people during smuggling and do not hand them over to the police  – in one case, they brutally tortured a person to death and threw the body away into the river or another side of the border. If the BSF gets the power to search, make seizures and arrest any suspect, then surely they will violate the procedure of arrest, search, seizure, and the attachment which relates to the memo of arrest, seizure list, search memo, etc., prescribed in the Code of Criminal Procedure,” Roy wrote in the letter to the NHRC.

Samirul Islam, president of the socio-cultural organisation Bangla Sanskriti Mancha that is active in several districts of the state, told The Wire that they would soon hit the streets to protest the Centre’s move. He alleged that the BSF frequently faced charges of extra-judicial torture perpetrated against people living in areas adjacent to the Bangladesh border, and with the new move, more people would have to face harassment.

“It can’t be said for sure how much effect the move will have in curbing smuggling, as the BSF should have stopped it staying within the existing jurisdiction in the first place. But it can be said for sure that this is an attempt to control and manipulate the 2024 Lok Sabha elections,” said Islam.

Adding further, he said, “It’s the Centre’s attempt to exert control using the backdoor as it failed to win the state election. Bengal and Punjab are the main targets of this plan, and Assam is merely a proxy to hide the real intentions.”

Udayan Bandyopadhyay, who teaches political science at Bangabasi College in Kolkata, did not see the move infringing upon the state’s jurisdiction.

“Theoretically, the state isn’t being deprived, as the BSF is not replacing the police, instead they are going to work in addition to the police force. The Centre has also the right to take such measures in the interest of national security. And if a central agency making arrests from the state without consulting the local administration is the point of debate…then the National Investigation Agency (NIA) already enjoys that power,” said Bandyopadhyay.

“However,” he added, “for all practical purposes, abuse of power which the BSF is frequently accused of will surely increase with the expansion of their jurisdiction.”

Jeta Sankrityayan, a former professor of physics at the University of North Bengal, who had also served as a member of the State Planning Board and worked extensively on the development of border areas, thought that the expanded jurisdiction would hamper the agency’s efficiency.

“Let the police do their work and let the BSF focus on the border and its immediate neighbourhood. Otherwise, their efficiency in their primary task – to protect the border and stopping infiltration and smuggling – will be affected. There will also be a conflict with the police which leads to unnecessary chaos,” Sankrityayan, a resident of north Bengal, told The Wire.