'Won't Bow Before This Govt': Aazad Promises to Carry on Anti-CAA Movement Before Leaving Delhi 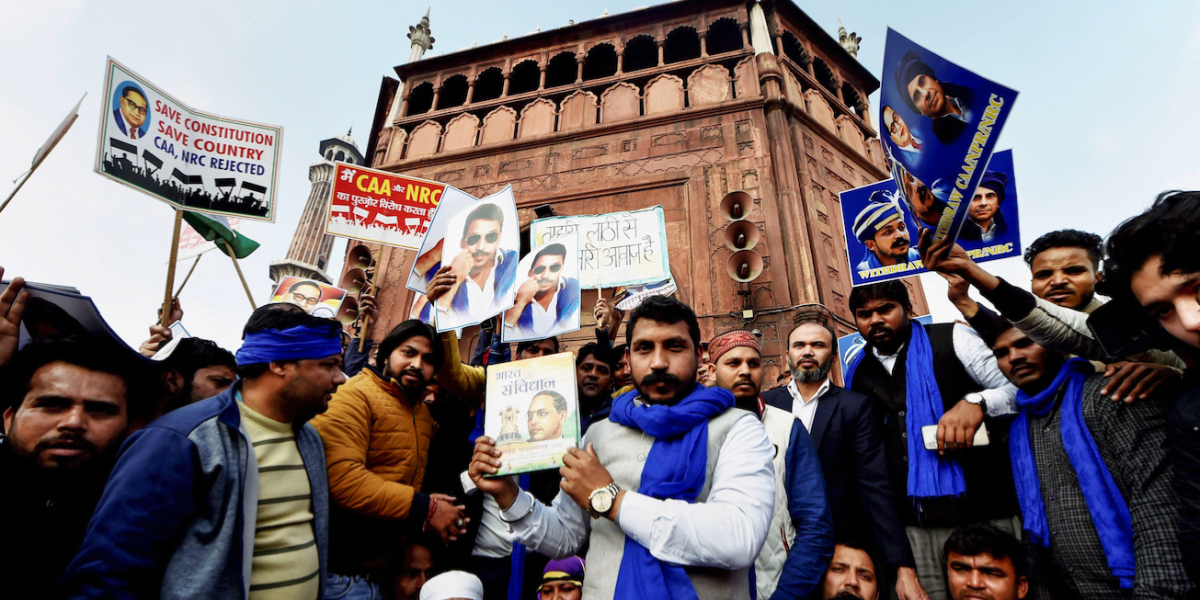 Translated, they mean, ‘I will sacrifice my life, I will go to jail a thousand times, if need be I will also face death penalty happily but I will not bow in front of this government.’

Aazad, or ‘Ravan’ was addressing reporters on what how he plans to carry on the movement against the Citizenship Amendment Act (CAA) and the proposed National Register of Citizens (NRC).

Aazad had been arrested after he led the Daryaganj protest on December 20. The Delhi Police accused him of making an inciting speech from the steps of the Jama Masjid, that allegedly led to violence and arson. He was released on bail on January 15 on the condition that he will leave Delhi within 24 hours for at least four weeks. In the 24 hours which he was allowed to spend in the national capital, he was barred from attending any protests against the CAA and NRC.

As the Dalit leader from Uttar Pradesh’s Saharanpur walked out of Delhi’s Tihar jail on the evening of January 16, he was welcomed by scores of his supporters with slogans of “Jai Bhim” and “Inquilab zindabad”.

Having been prohibited by the court to attend any demonstration, Aazad spent his day at different places of worship. He visited Jama Masjid, Jor Bagh’s Karbala, Ravidas temple at Mandir Marg, and the Bangla Sahib Gurudwara. He made an an intermittent stop at the Indian Women’s Press Corps that had invited him for a discussion, before leaving the boundaries of Delhi by 9 pm. 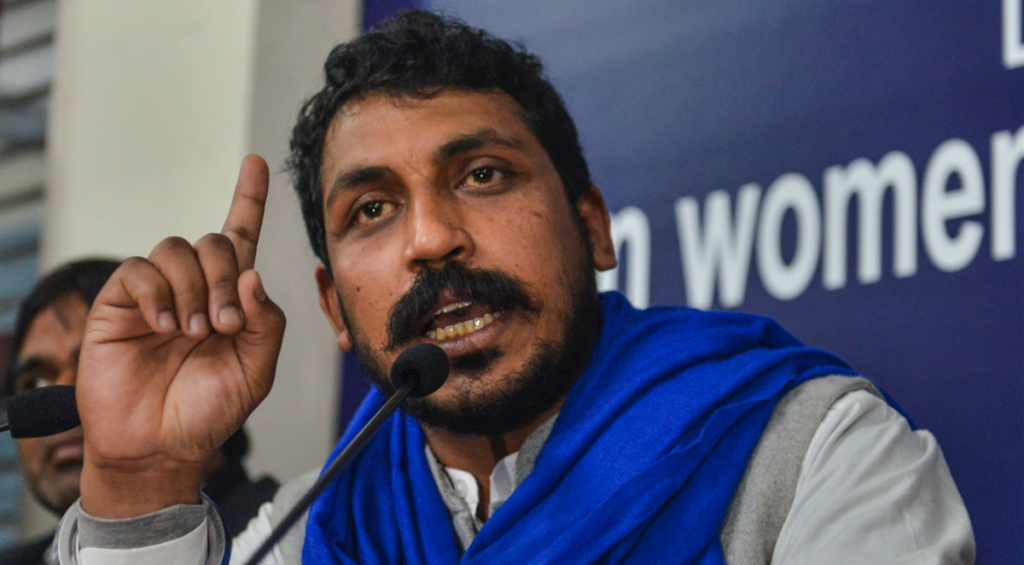 “I do not oppose an Act like CAA (which grants relief to refugees) but this government has brought in a divisive Act that differentiates refugees on the basis of their faiths,” said Aazad, his trademark blue scarf firm around his neck.

“Even the clothes that I wear today are because of Dr. B.R Ambedkar,”Aazad said, adding, “If he had not authored the Indian constitution and guaranteed us our rights, people like me and scores of other oppressed communities would have continued to face humiliation on a daily basis.”

“Let me repeat my so-called provocative speech today,” he declared as he went on to recite the Preamble in Hindi again.

“I went to Jama Masjid to protest against CAA-NPR-NRC, which I think are kala kanoon (black laws). I went there because Jama Masjid has historical relevance in our nationalist movement. Maulana Azad had exhorted Indian people to oppose Partition of India on religious lines from there. India is on the verge of yet another such partition today. It is my constitutional duty to oppose these laws,” said Aazad.

Also read: ‘Have You Read the Constitution?’ Asks Judge as Delhi Police Oppose Bail for Aazad

He went on to talk about Part IV A (Article 51) of the constitution to highlight that it is the fundamental duty of every citizen to protect the constitution. “When the government itself is trying to divide the nation on the basis of religion, it amounts to nothing less than weakening the constitution. That is why I am fighting against CAA on the streets,” he said.

He said that if he had the freedom, he would have visited the Shaheen Bagh protests.

He said the NRC in Assam had excluded around 19 lakh people, and wondered what would be the human cost of a pan-India NRC, which the Union home minister Amit Shah has spoken about and Modi has since denied the prospect of. 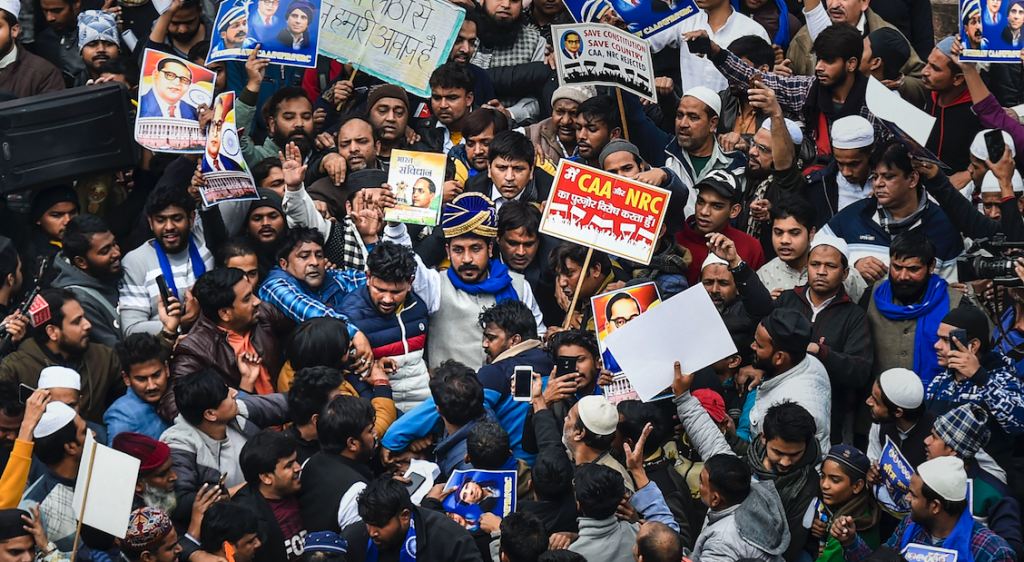 In the days to come, Aazad said, he will try to work towards building solidarity among all protesting groups, and raise awareness about ‘black laws’.

“Now that the BJP and RSS’s ‘Ram mandir’ agenda has been fulfilled, CAA-NRC is their new divisive agenda. I will tell people that we are more Indian than this government. I can give my blood to this country.

“I want to remind both our prime minister and the home minister that there is no court bigger than people’s court. The PM should not be thinking of himself as larger than the constitution. This country’s brotherhood is bigger than your politics,” he said.

“For them, CAA-NRC may be an election agenda. They may withdraw it after West Bengal elections. But for us it is a fight to save this country, its secular ethos. We will not move an inch backwards. And I am confident we will win this battle.”

On a question on whether he wants to enter electoral politics, he said he had planned to contest elections but postponed it as he thought a larger battle to stop CAA-NRC is more urgent in current times.

On a question about Shah’s comment that the anti-CAA protests are orchestrated by the opposition, he said, “The government is misleading people. This is purely a people’s protest. I will move ahead to make sure that the protests don’t lose their momentum.”

“The opposition is doing its role. I will also do mine. Jaati, dharam se bada ek mazhab hai, woh insaniyat hai. (‘There is a bigger religion than caste and faith, and that is humanity’),” Aazad said, as his supporters in the crowd cheered.