Despite the Indian Railways confirming that at least 80 deaths were recorded on Shramik Special trains, the Centre refused to disclose this data in parliament. 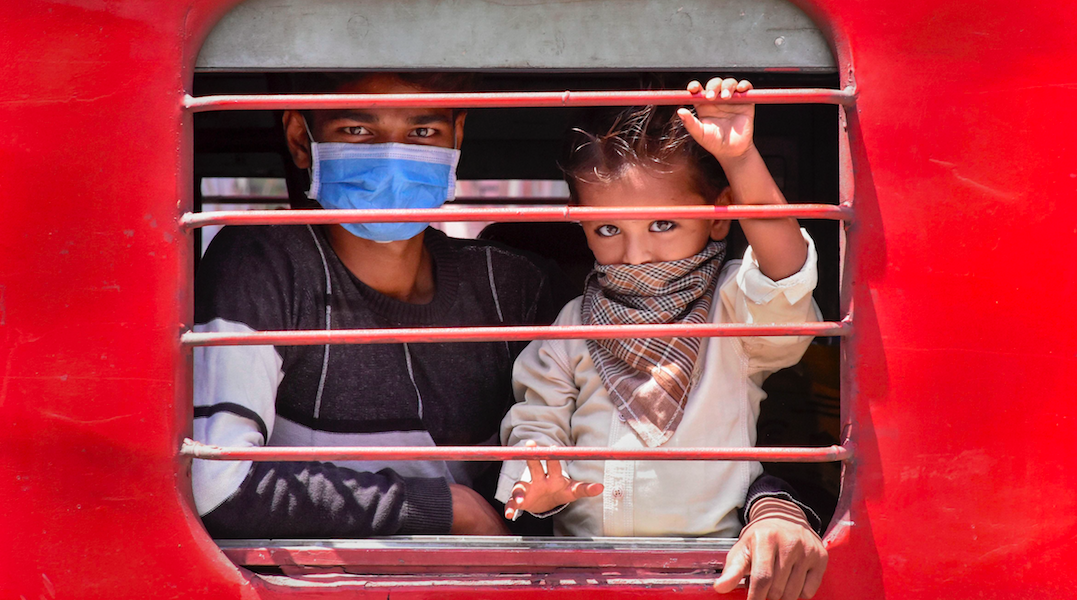 New Delhi: During the on-going parliament proceedings that began on Monday for the first time since the coronavirus lockdown was announced, 10 Lok Sabha MPs have posed questions related to the deaths of migrant workers.

In response, the minister of state for labour and employment, Santosh Gangwar said that no such data is maintained.

The Narendra Modi government is facing a backlash with opposition parties alleging that the Centre is deliberately trying to hide the information because it is likely to show it in bad light. During the lockdown, migrant workers were forced to return to their homes on foot, causing a public outcry. It was only later that Shramik trains, buses and private vehicles were allowed to ferry them home.

Contrary to Gangwar’s claims, documents obtained by The Wire under the Right to Information Act reveal that the government has recorded information about the deaths of migrant workers.

Information provided in response to the RTI application filed in 18 zones of the Indian Railways has confirmed the deaths of at least 80 people on board the Shramik Special Trains.

Also Read: No Data, No Problem: Centre in Denial about Migrant Worker Deaths and Distress

Among those who died are an 8-month-old infant and an 85-year-old elderly person. At least two new-born babies also died on board these trains.

The Wire has obtained copies of the documents that recorded the deaths of migrant workers on the special trains. The Railway Protection Force (RPF) was incharge of registering these deaths and forwarding the information to the concerned railway zone or division.

The reports submitted by the RPF revealed for the first time that several deceased persons on board the Shramik special trains were infected with the coronavirus. Others who died had symptoms of the virus, such as cough, fever, vomiting and their condition suddenly deteriorated.

The documents also reveal that in several cases, an autopsy was not conducted on the demand of family members.

There are 70 divisions in 18 zones of Indian Railways. Of these, only 14 divisions provided information which shows that at least 80 people have died on board the Shramik Special trains operating in their area.

If other divisions also make public their data, this figure is likely to go up. However, the Indian Railways headquarters has refused to furnish the information.

Migrant workers who were stranded in Rajasthan due to the lockdown look out from a window of a train after arriving in West Bengal on May 5, 2020. Photo: Reuters/Rupak De Chowdhuri

What the RTI shows

The Deen Dayal Upadhyay (Mughalsarai) Division of East Central Railway (ECR) said that a total of five people – three women, one man and one child – died while travelling on Shramik trains since May 1, 2020.

The deceased include the eight-year-old son of Pravesh Pandit, a resident of Sanpurwa village in Sitamarhi district of Bihar, who was returning home from Mumbai along with his family. According to the RPF, the child was already ill and was given medication on the way, but could not survive.

The report states that Pandit had to cremate his son in Gaya instead of his native village in Sitamarhi. In the report sent to ECR’s station superintendent in Gaya, the RPF claimed that the father had himself requested for the child’s funeral there.

In another case, 32-year-old Poonam Devi, who was returning to Gaya, died on June 16 in a Shramik Special Train. She was accompanied by her husband, mother and two brothers.

The report of the RPF stated that according to her husband, Poonam had suffered a leg injury 3 or 4 months ago. The infection had spread to her body, which led to her death.

The Bhusawal division of the Central Railways reported six deaths on board the special trains since May 1. This includes people between the age of 22 to 27 years.

Similarly, the North Frontier Railway claimed that eight people died on Shramik trains under its jurisdiction.

According to the report submitted by the RPF in this regard, the cause of death of two people could not be ascertained. While one person died of brain haemorrhage, another died due to shock, but the reason for the shock is unknown.

The Ambala Cantonment Division of the Northern Railway said that two casualties, 48-year-old Sameer Ahmed and 62-year-old Daya Baksh, were reported in their jurisdiction. Both of them were residents of Uttar Pradesh.

The Kolkata Division of the North Eastern Railway said that three people died in Shramik trains in their area. They were residents of Malda and Darbhanga districts. However, in its report, the RPF has claimed that they were already suffering from an illness.

The Sonpur division of the same zone has reported a total of seven incidents of unnatural death on special trains for migrants under their jurisdiction, in which three deaths occurred at Muzaffarpur, two at Barauni and another two at Mansi railway station.

The Lucknow division of the Northern Railways said that a total of seven people died on board Shramik trains operated in their area. The deceased also include an 85-year-old man, Ram Chandra Soni.

The RPF department of the North Eastern Railway zone said that a total of nine migrant workers or passengers were reported dead on the arrival of Shramik Special Train in the Lucknow division. Apart from this, two new born babies were also found dead.

In this report, the RPF has confirmed that an autopsy was not conducted in several cases and the cause of death in many cases is unknown. It has also been confirmed that at least one of the deceased tested positive for the coronavirus.

“On 24.05.2020, a deceased person, Mahesh Maurya, who was a resident of Mau district, was taken off coach number 11417 of Shramik Special Train 01954 on its arrival at the Basti junction. The Government Railway Force of Gonda and the district administration took the body for further investigation,” the RPF said.“In the examination, the deceased person was found to be Covid-19 positive, but the post mortem was not carried out,” it added.

Similarly, the Jabalpur division of the West Central Railways has also confirmed that a passenger died owing to COVID-19 in the Shramik Special train running in its area. Food being distributed to passengers on a Shramik Special train in Lucknow. Photo: PTI

According to a study conducted by a group of independent researchers, there have been nearly a thousand deaths between March 19 and July 4 which are not directly related to the coronavirus infection, but were caused by other problems emerging out of the crisis.

Citing information gathered from various media reports, the researchers claimed that between March 19 and July 4, they could collate 971 deaths which are linked to the lockdown.

However, the actual number could be much higher, as the researchers collated the data only from newspapers or portals.

The maximum number of deaths, that is 216, occurred due to starvation and financial crisis. At the same time, 209 migrant labourers died in separate road accidents while they were returning home on foot due to unavailability of public transport during the lockdown. 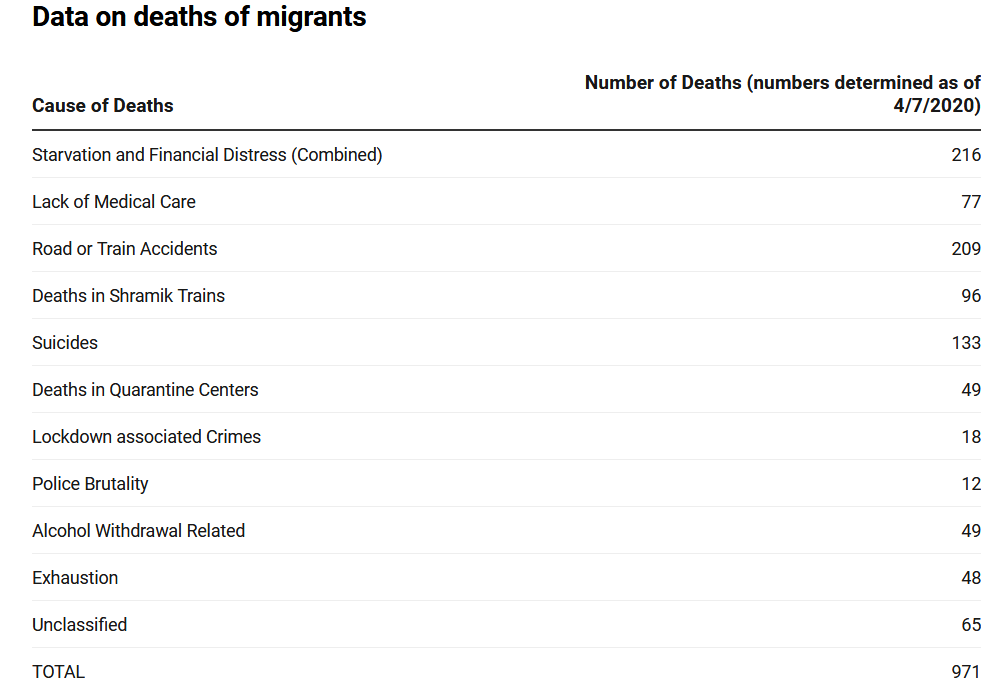 In addition, 133 people died by suicide out of fear of the coronavirus infection, loneliness, travel restrictions imposed during the lockdown and the desperation over their inability to return home. According to the report, 96 migrant labourers died on board Shramik special trains while 49 others died at various quarantine centres.