This year’s Republic Day parade is unlikely to feel like an ode to the people of India. 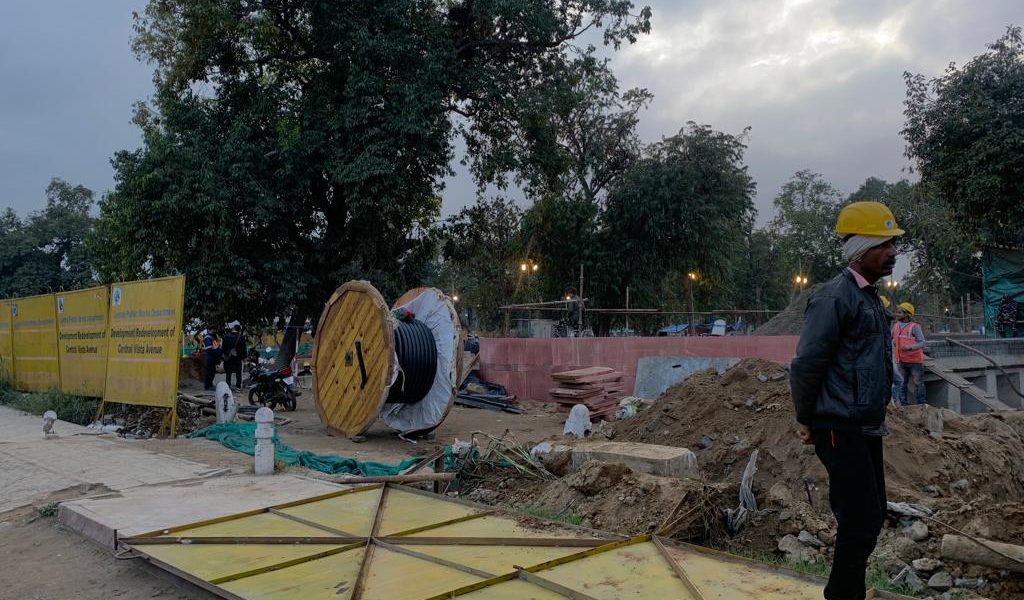 ‘Yeh desh hai veer jawano ka…’ echoed on the cordoned-off streets of Rajpath as masked policemen guarding the barricades stared at anyone who passed by, until they left. The yesteryear song from Naya Daur infused the dewy January wind with an instant sense of patriotism. It overshadowed the cacophony on both sides of the barricades: running traffic on one; and machines digging roads only for labourers to ‘refurbish’ them on another. Newly installed bleachers on both sides of the lane shined just as much as the glass-shielded seating of the prime minister closer to the India Gate did. Convoys of army jawans and vehicles with red beacons passed in and out of the barricades, while construction workers walked on the pavements carrying heaps of cement on their heads.

The lane almost looked ready. Ready for the inauguration it has been boasting about since the first stone was laid by the prime minister on December 9, 2020. Ready to be the ‘nation’s power corridor’. Ready to host the parade on the country’s 73rd Republic Day. And while the songs of nationhood and words of ruling-party ministers vehemently tried to instil that pride in every labourer working to make that day possible, it could do little to obliterate the fear in their eyes. They could see that most of the rest of the city was not leaving their homes again.

“They say we are working to make the country great again. The world is going to look at it, visit it, talk about it, they say,” said a barely-20-year-old man from Tikunia, noticeably wary of the high surveillance he was surrounded by. Standing amidst heaps of bricks and tiles, he pulled out a roti wrapped with pickle from a plastic bag. It was the only food he could afford every day. He hurried, as he stuffed his mouth with his late lunch with one hand and wiped sweat off his forehead with another. The urgency in the atmosphere was palpable. There was no time to rest for these men and women during their 12-hour shifts. They were exempt from the ‘yellow alert’ in the city. With the rapid spread of the Omicron variant, the COVID-19 positivity rate rose to 23.53% – 3.53% away from causing a ‘red alert’ – in the capital city on January 9, 2022. Chief minister Arvind Kejriwal regarded this as a matter of ‘deep concern’, and the Delhi Disaster Management Authority (DDMA) imposed stricter restrictions. Hospitals readied beds again. Headlines on wearing masks, social distancing, isolating and working remotely were back. However, the unmasked labourers with little to no protection continued to work on the ‘vital and essential’ national project.

It was soon after the last Republic Day that Union minister Hardeep Singh Puri announced the fate and destination of this year’s parade. Aggressively defending the project and refuting every criticism against it for the following months, he promised to unveil the ‘symbol of modern India’. However, never did he comment on the working conditions of the daily-wage workers through the pandemic, nor did he pay heed to the effect of yet another wave of COVID-19 on them.

“The contractors are actually in need of more like us. Many labourers who went back home last year are still too scared to come back. Why wouldn’t they be?” the young worker asked, expecting no answer and his voice quavering. His eyes stayed on a makeshift shanty at a little distance. He spent most of his nights there, as his daily shift ended well past the city curfew. For him and hundreds like him, these are not just their working conditions, but also the ones they live in. Apart from being a celebration of India’s cultural heritage, the Redevelopment of the Central Vista Avenue promised to be a source of livelihood for over 10,000 skilled, semi-skilled and unskilled workers. The Rs 5,477 crore project monitored by the Central Public Works Department (CPWD) claimed to be noble – to be for the people. However, with only 10% of the total budget spent on the construction until now, there has been no official monetary allocation to ensure workers’ safety. While the Union government stated that the contractor, Shapoorji Pallonji & Co. Pvt. Ltd., provided health insurance for all the ‘concerned’ workers in May 2021, it is yet to release tangible data on that.

Also read: Central Vista Is ‘the Most Beautiful Place Already’: In Conversation With a Pani Puri Seller

“We can barely even wear our masks while working, let alone distance ourselves from one another. We did not have that privilege last year. We do not have that privilege this time as well,” said the man, shrugging as he slowly stood up. He began lifting the bricks he was resting on to strengthen the bleachers on the sidewalks of the three-kilometre-long path of the Central Vista Avenue. It is here that the parade – a 70-year-old tradition – is supposed to take place. A tradition that, historically, has been a celebration of Indian democracy; an ode to everyone working for it. However, for the first time in decades, it feels different. And as the man began walking towards the sparkling new Avenue with stacks of bricks on both sides of his shoulders, he smiled at me for the first time. He walked, humming ‘iss desh ka yaaraon kya kehna, yeh desh hai duniya ka gehna…’. I smiled back.