CAB and NRC: Why I Will Register Myself as a Muslim

Doing so will clear the moral pathways of the civil disobedience I intend to carry out against the graded hierarchy of citizenship. 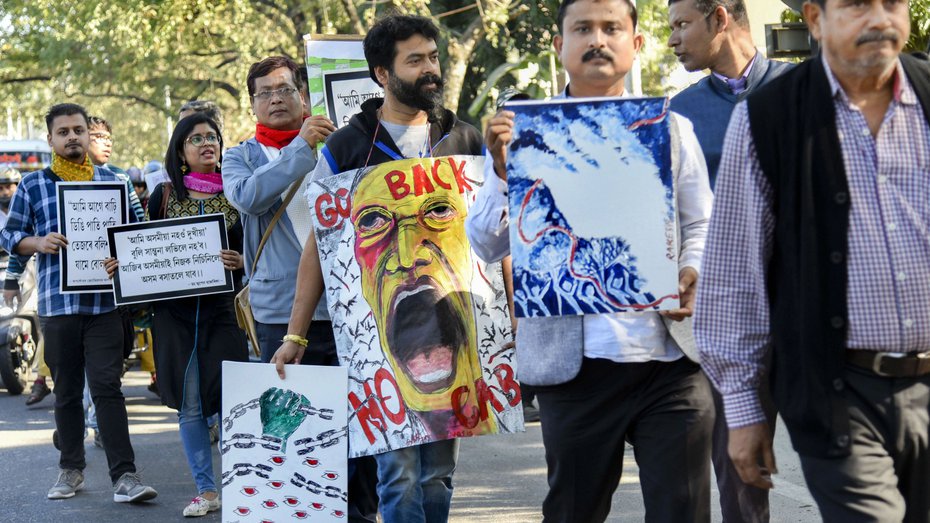 A protest against the Citizenship (Amendment) Bill. Photo: PTI

As the Citizenship (Amendment) Bill (CAB) becomes the law of the land, India veers dangerously and decisively away from the humane and inclusive nationhood that lay at the core of its struggle for freedom. The imagination, the pledge and the aspiration that India would be a country which would belong equally in every way to people of diverse faiths constituted the core of its constitution. Today that core has caved in, as people of just one religious heritage, India’s Muslims, have been placed lower than people of every other religious identity, in a new graded hierarchy of citizenship.

This is the most decisive marker so far of India hurtling into a Hindu nation. The Indian people cannot rely on its political opposition to fight or resist this mounting catastrophe. The opposition lacks not just the numbers; it’s true failing this a moment of independent India’s history when the people of India need it most is its famine of moral and political conviction.

What form of democratic non-violent resistance can the people of India mount to challenge this law which marks in many ways the extinction of our Constitution? I have agonised and struggled for answers. I looked first at what we can learn from Mahatma Gandhi and the path of civil disobedience. Gandhiji in 1930 disobeyed the colonial law which prohibited the production of salt by marching to the ocean beach in Dandi and making salt by evaporating saltwater. He was arrested and spent a year in jail. With him, 60,000 Indians were imprisoned for the crime of making salt.

Gandhiji taught us that if citizens seek to fight an unjust law with truth and non-violence, they must disobey it. This disobedience should be defiant, public and performative. However, such disobedience in itself is not enough. A satyagrahi who breaks an unjust law must not just accept, but demand punishment for breaking this law. Without this self-suffering, this disobedience loses its moral force. The state must in this way be presented with only two options. One is to punish the persons who rebelliously defy the law. The alternate is to abrogate the unjust law. The state should be left with no third option. 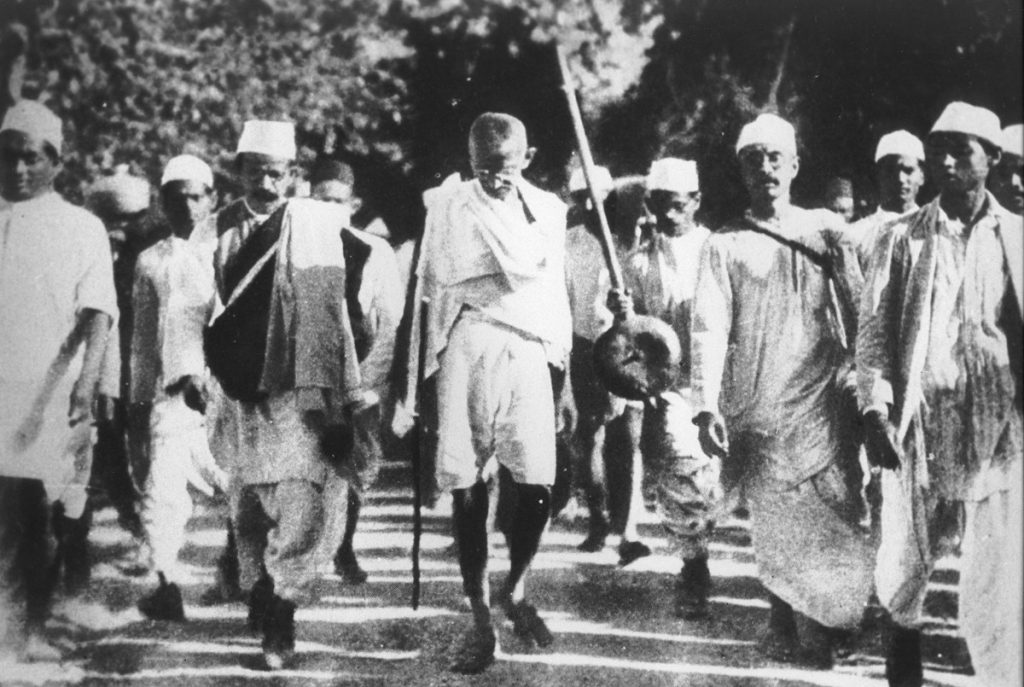 The satyagraha against the CAB combined with the nation-wide National Register of Citizens (NRC) promised by home minister Amit Shah inside and outside parliament, could best take the form of a call to boycott the NRC and refuse to present any documents required for the exercise. But the moral and political conundrum which confronted me if we adopt this path of civil disobedience is that it is only India’s Muslims who would suffer punishment, which could include being interned for long years in detention centres, and being stripped of one’s citizenship rights including the right to vote, to own property and access social security from the state. For non-Muslims who boycott the NRC, there will be no adverse consequences, because the law is designed precisely to treat them as persecuted minorities and award them Indian citizenship. The satyagraha of civil disobedience would have no moral salience if the satyagrahi is not punished by the state for disobedience.

I knew that I needed to look further for inspiration and guidance. I found answers in the praxis of public resistance within the unlikely shores of contemporary United States.

One of the first Presidential orders of Donald Trump in January 2017 was to suspend the entry of people from a number of Muslim countries. Within hours of his announcement, American airports filled up with protestors to express their solidarity with those Muslim travellers who were halted by immigration authorities. They held aloft banners with slogans like ‘No hate, no fear, refugees are welcome here’, ‘You are welcome’, and even ‘We are all Muslims’. Residents in mixed neighbourhoods knocked on the doors of their Muslim neighbours with reassuring messages of friendship and acceptance. Christian and Jewish faith leaders declared solidarity with those affected by Trump’s ban. They spoke of their ‘moral obligation to “welcome the stranger”’, that denying people a place of ‘safety will not make our nation safer’, and that the ban echoed ‘fears that guided past discrimination against other religious communities such Catholics, and, disastrously, Jews in the years before Nazi Germany’.

I was raised Catholic, became Episcopalian & found out later my family was Jewish. I stand ready to register as Muslim in #solidarity.

These examples from two opposite corners of the world, separated by 90 years, illuminated for me the way to craft my civil disobedience against the CAB. My civil disobedience would be morally incomplete if whereas I suffer no penalties for my disobedience, people of the persecuted identity ‘Muslim’ would. I realised that I could remedy this only if I begin my civil disobedience by my declaring myself in official records as Muslim. I saw this the only way by which I would be subject to the same official consequences and penalties of boycotting the NRC as Muslims would be after the passage of the CAB and its pernicious construction of graded citizenship.

I was born to devout Sikh parents, but regard myself to be agnostic and humanist. I do not believe in God or follow any religion, but I am at the same time committed to respecting the religious faith (or the denial of it) of all others as long as this encourages in its adherents – kindness, solidarity, equality, justice and peace.

My intended official declaration of Muslim-hood does not alter this resolve in any way. I have not said that I intend in protest to convert to Islam (or any other faith). All I have declared is that I will register in government documents which are designed to determine my eligibility for citizenship rights as a Muslim, in order to stand in solidarity with my Muslim sisters and brothers whose rights alone have been imperilled by this new law.

Also Read: The Citizenship Amendment Bill and NRC Will Together Destroy Our Country

How does the state determine a person’s religious identity? It cannot be by looking at one’s name. I have friends of Muslim heritage, carrying Arabic names, who are avowed atheists. My Sikh parents named me Harsh Mander Singh (the Mander came from the middle name of my father Har Mander Singh). In my youth, Jayaprakash Narayan made an appeal for people to abandon those parts of their names which divulge their caste or religion. After I entered the IAS, I decided therefore to drop the ‘Singh’ in my name. (I persuaded three other colleagues in the service to do the same).

To try to construct even more syncretic identities, my wife and I gave our daughter an Arabic name Suroor. A young Muslim colleague who was fond of me named his son Harsh. How will the state determine the religion of any of these persons by simply looking at our names, especially when one’s religion will centrally determine one’s access to (or denial of) the rights of citizenship?

At present, the main official record of one’s religion is based on one’s self-declaration during the decennial census. This means that for official purposes, one’s religion will be what one chooses to register oneself as. My resolve is, therefore, to officially register myself for purposes of citizenship determination as a Muslim.

Once I declare that, the state must treat me as a Muslim and the moral pathways for my civil disobedience are cleared. Because now, when I disobey by refusing to present any documents before the NRC, I will stand in truer solidarity with my Muslim sisters and brothers who are unable to (or refuse to) produce the documents which establish citizenship before the Indian state. I will then be able to demand, in the manner that Gandhiji taught us by his example, that I be punished in exactly the same way as many undocumented Indian Muslim. If they are exiled in detention centres, I too will demand the same penalty for me. If their citizenship rights, of adult franchise or owning property are extinguished, then I will demand that I should face the same penalties.

An India proud of its diversity

Maybe this is a dream. But maybe it is not. This is the time for every Indian to decide the kind of India they wish to leave for their children. Is this an India proud and confident in its diversity, an India of kindness, equality, fairness and fraternity? Or is it an India which belongs to some and excludes others violently and mercilessly only because of the God they worship?

Also Read: An All-India National Register of Citizens Will Be an Economic Disaster

The freedom struggle was not just a battle against British colonialism. It was also a battle for the kind of India we would construct out of our freedom. The first battle is accomplished. The second is still being waged. It will need to be fought in the streets and in our hearts. I hope that many will join this battle to claim the fraternity which Dr Babasaheb Ambedkar declared was central to India’s constitutional morality.

If I am alone in this, then so be it. As Tagore wrote, Ekla chalo re! But I don’t expect to be alone. Many will surely perform satyagraha against a law which seeks to build a hierarchy of citizenship based on religion.