The exclusionist language of the CAA and fears of a 'Hindu nation' have set of the biggest display of opposition since this government came to power.

The strategy is clear and the police have spoken. You protest, we hit! The students are told to behave. This is not the ‘mausam’, or time, to protest. Protest is anti-national. The dharma of the public is to be ‘patriotic’ and any form of dissidence is a manifestation of being anti-India and anti-national. Non-Muslims, if they protest or are agitated, are ‘misled’ persons carried away by anti-national propaganda. Foreign press and opinions be damned. They carry an inherent bias, being historically impressed by Nehruvian thought and the so-called left-oriented liberals.

Relentless pressure on students by callous and insensitive university officials have driven them to despair. Rohith Vemula killed himself thanks to the University of Hyderabad not releasing his stipends despite desperate requests. Kanhaiya Kumar, Anirban Bhattacharya and Umar Khalid all stand trial for sedition. (Mercifully, the Delhi government has not formally sanctioned their prosecution.) Images of Kanhaiya being assaulted at the Patiala House court shook the student community across India.

Subsequently, unnecessary belligerence on the part of the JNU vice-chancellor is leading to the destruction of what is arguably the finest university in India. He has stifled all voices of dissent, and used his administration to harass students and faculty. A large number of faculty members are now in court against his dictatorial actions. The recent stories, seen in video footage, of merciless beatings of students within the AMU and Jamia campuses bring out the developing story. Clearly the administrations at both universities have let down their students.

Having made initial noises condemning police action at Jamia, the vice-chancellor shamefully changed track. In an interview to India Today, she claimed no one was responsible for the violence that occurred. I shudder to think how the students feel about this and what respect they or the faculty members will have for her in future. The AMU vice chancellor had no qualms in admitting the police into the campus. One can safely assume that even after time passes, he will never have any respect from the faculty and students and his tenure shall not be comfortable.

Students in these universities come from mufassil towns and cities and look to a future. They are as much Indian as anyone else and are very bothered at the constant challenge to their sense of duty to India. But the relentless questioning of their patriotism and nationalism – pressure they initially ignored – has kindled a desperate anger. They come from families with meagre resources, jobs are difficult to find and now they find their place in India being questioned – this is a deadly combination.

Faced with the Citizenship (Amendment) Act (CAA) and the dread of the National Register of Citizens (NRC), they chose to protest. Muslims across India have been extremely fearful of the NRC. The CAA, whose language is so blatantly exclusionist, has convinced them of the government’s inexorable march to majoritarian rule. Assam has proven that millions of Indians cannot provide the documentation needed for satisfying the NRC conditions.

The students from Jamia protested in fear and desperation, and the Delhi police foolishly overreacted. The merciless beating of students within the campus, in the library, entry into the girls’ hostels was all utterly unnecessary. And now to protect themselves, they have – as stated by some TV channels – reported to the Ministry of Home Affairs that they suspect ‘foreign elements’. Some ministers have hinted at ‘jihadists’ and ‘Maoists’ being behind the violence. These foolish statements suggest the aim is to turn an indigenous student protest into a communal one.

However, the protests that have now spread across India, and are not limited to students, have been joined by all communities. India’s secularism shines because while the majority of protestors may indeed be Muslims, members from all communities have joined the protests. Memories of the large agitations of 1974-75 have come alive, a consequence of which was the imposition of the Emergency. But as George Santayana has said,  “those who cannot learn from history are doomed to repeat it.” Most leaders in the current dispensation are products of that movement. Some remained underground, others endured incarceration and emerged heroes. How is it that they have put aside memories of those dark days? 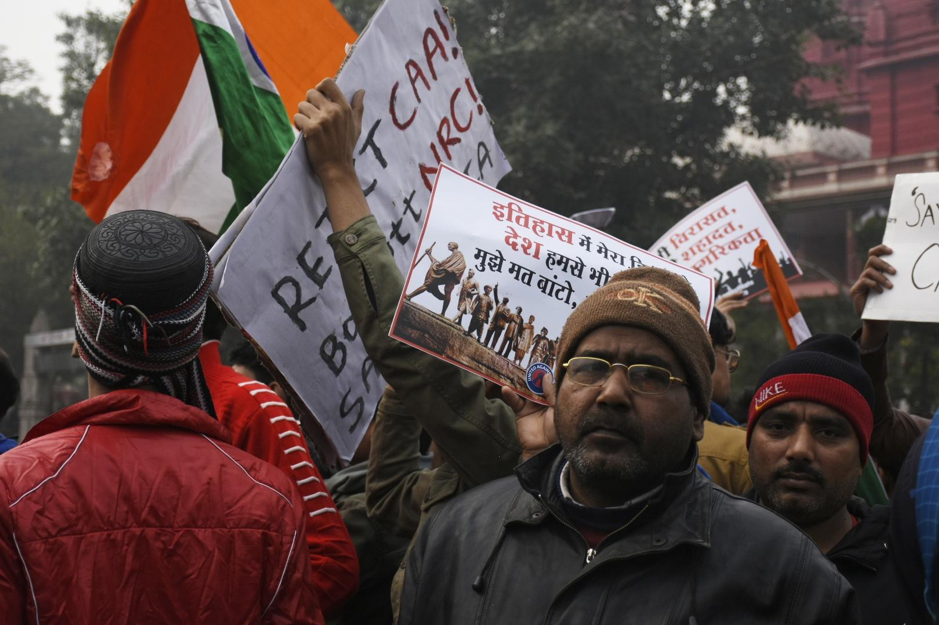 Protesters at Lal Qila, before being detained.

How long will it take for the Union government to realise that it is impossible to implement a nationwide NRC? This past week has seen the biggest display of opposition since this government came to power. This is largely because it confirms the fears among many that the country’s government is on the trajectory to imposing a ‘Hindu nation’ with minimal dissent allowed.

Unease among many of us – Hindus, Muslims, Christians, Sikhs et al – shall remain, along with those who believe in the principles of the Constitution. There shall be wider protests. In all probability thousands will boycott the NRC process, leaving the government of India in an embarrassing position. States will decline the Centre’s dictate, thereby challenging the very heart of our federal structure. Where will the detention camps be built? What will be the cost? How much of administrative manpower will be used? Will officials be pulled out from their current duties?

Those of us with some administrative experience know the cost to usual work for conducting elections or carrying out the census exercise. Almost all routine work stops in field offices. School teachers, patwaris, revenue officers, panchayat employees are all utilised, causing delays and harassment to everyone.  So where will state governments get the manpower for this exercise to be carried out over years? I need not add the beating India’s image is taking in the international community. Every major newspaper across the world has been covering the protests, the police violence and the internet shutdown across large parts of the county.

It is therefore imperative that the government immediately announce the withdrawal of its intent to implement an India-wide NRC and open a dialogue with opposition parties, state governments, students, activists, academics etc and work out the nuances of the CAA to make it more wide-ranging and not patently exclusivist.

Najeeb Jung is a former lieutenant governor of the National Capital Territory of Delhi and a former vice chancellor of Jamia Millia Islamia.