"These anti-worker stances are taken during a time when we deserve extra financial help from the mill and the government," said the Riga Sugar Mill Workers’ Union President.

Patna: As many as 600 workers at a sugar mill in Bihar’s Sitamarhi district now face an excruciating future.

On May 11, the Sitamarhi-based Riga Sugar Mill passed an order to close operations for all sections of the factory, sending shock waves to hundreds of workers and thousands of farmers, who had already been suffering due to the lockdown.

The mill management notice said that there would be no work for workers, including seasonal workers covered under the wage board award of sugar industries, due to the temporary shutdown at the sugar plant from May 11 to July 11, 2020. In the notice, which was accessed by The Wire, the management of the mill made it clear that workers would not be paid for this period.

The shutdown of the mill is estimated to have a ravaging effect on both workers, who were a part of the factory, and the sugarcane farmers who supplied cane and depended on the earnings for their livelihood.

Riga sugar mill management had recently also sought financial assistance from the state government after the mill sustained heavy losses. “This sugar mill has been facing a financial crisis for a long time. The mill had taken a loan of Rs 12 crore from the bank, but has failed to repay it so far,” said Shashi Gupta, an official from the mill as reported by local newspapers.

Speaking to The Wire, Riga Sugar Mill Workers’ Union President Ramanand Thakur said, “Neither the workers nor the workers’ union was informed about the shutdown of the mill. After reaching the factory, we found that we had been stripped of our jobs and the management said that, due to financial scarcity, the mill could no longer function.”

“Taking away jobs, the non-payment of salaries for the last two months are all are anti-worker stances taken, that too during a time when we deserve extra financial help from the mill and the government. Mazdoor hi hamesha majboor hota hai, humko koi poochne waala nahi (Workers are always helpless, no one is bothered about us),” added Thakur. 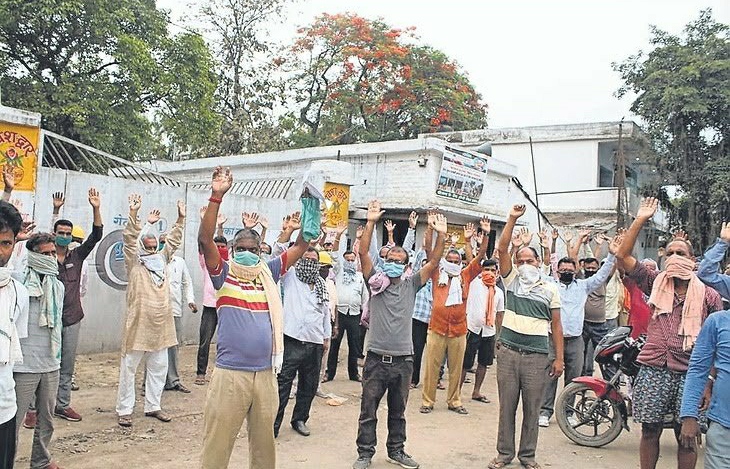 The sugar factory, which was established in 1932, once had the highest levels of cane crushing and sugar production but due to unfavourable agroclimatic conditions, bizarre management and the decision to carry out crushing operations during extremely hot summer months a steady decline in sugar recovery percentage decreased alot.

As per the Sugarcane Development Department’s website, the sugar mill count of the state is 28 out of which 17 mills are closed with 11 in operational mode. However, the shutdown has lowered the count to 10.

Last month in the backdrop of lockdown, state’s deputy chief minister Sushil Modi asked the owners of state’s 11 private sector sugar mills to make an immediate payment of arrears of Rs 934.34 crore to cane farmers. Ironically, amid the pandemic induced lockdown, instead of receiving financial assistance, mill workers and farmers have been further entrenched in unemployment.

Nagendra Singh, a social activist based in Sitamarhi, who has been vocal in demanding rights for sugarcane farmers said that apart from workers and employees, the sudden closure of sugar mills would also affect at least 50,000 farmers hailing from the districts of Sheohar, Muzaffarpur and parts of East Champaran, who were dependent on its functioning for their livelihood.

The constant supply chain of cane plays a crucial role in sustaining the economy. But a large number of cultivators have payment pending from the factory’s side. Moreover, farmers say there is consistent non-payment of dues despite the timely supply of yield to crushing units of the factory.

President of the Bihar Kisan Sangharsh Morcha, Dr Anand Kishor said, “We have appealed to the chief minister to intervene against the atrocious and anti-worker move of the sugar mill management. Cane cultivation is undertaken with hardship and results in a dysfunctional factory land rural economy in adverse conditions. Now, how can farmers expect the due clearance?”

Notably, for the last five years, the mill was in doldrums and owed a humongous sum of Rs. 112 crore to sugarcane farmers. The workers of the factory in the recent past had approached the district administration over untimely payments but to no avail. As per the Sugarcane Control Order, 1966, sugar mills must pay farmers within 14 days or face a 15% annual interest on dues. The sugar mill was the only active industry covering a large region of three districts namely, Sitamrhi, Sheohar and Muzaffarpur.

Were warnings about closure ignored by the Bihar and Central government?

Riga Sugar factory’s closure was a direct decision of the management but its deteriorating condition and ailing stature was an open secret known to the state government. That the recovery rate in 2017-18 and onwards was the least among all the active sugar mills, was a major indicator of the same. 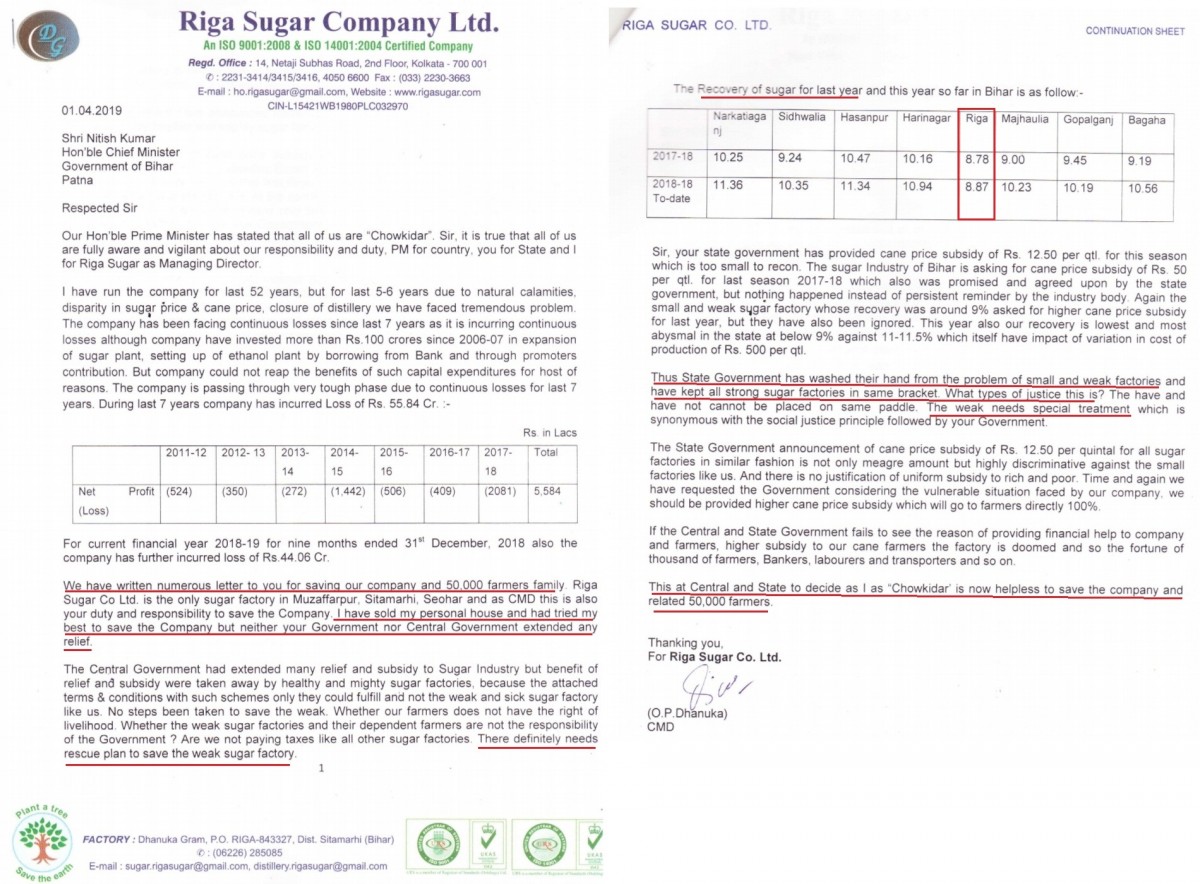 The Wire accessed Riga’s CMD Om Prakash Dhanuka letter written to the state’s chief minister a year earlier cautioning about the dwindling finances of the company and urged him to save it and claimed that no relief by either the state or central government was provided. The letter also mentioned that the factory had incurred severe losses in the last seven years.

Additionally, he requested for a rescue plan to save the sugar factory and openly accused the government of abandoning small and weak factories without providing any assistance.

The Wire attempted to contact Bihar’s Minister of Sugarcane industries and the CMD of Riga Sugar Mill but did not get a response.