For Muslims in Bihar, Jobs, Poverty and Illness Took a Backseat to the Citizenship Question

There is polarisation as much as there is anger with Nitish Kumar for letting a community down on the issues of the CAA and NRC. 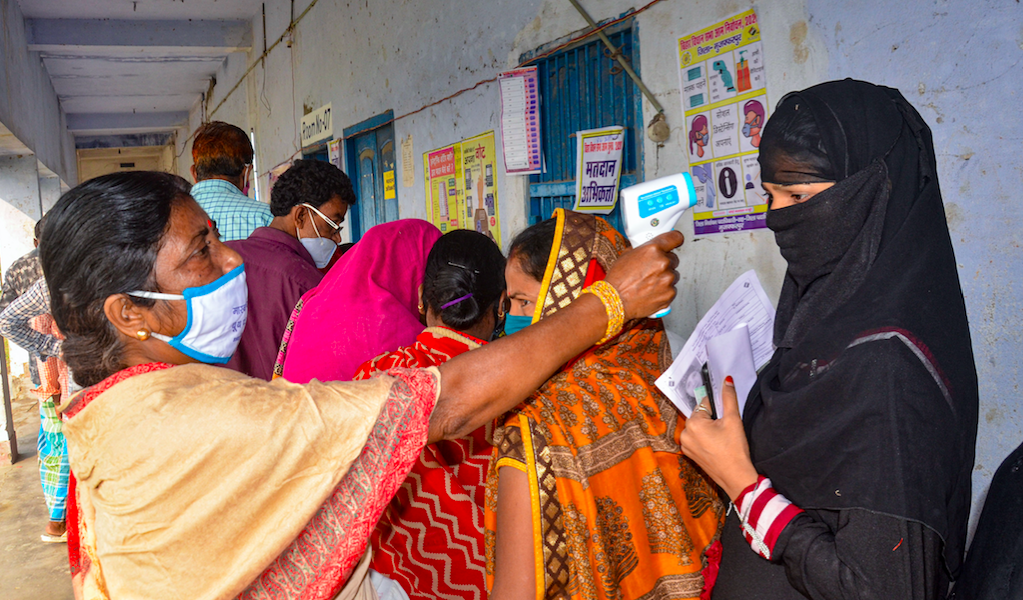 A woman gets her temperature checked at a polling booth in the third phase of the Bihar election. Photo: PTI

While the upper caste Hindu voters sought to dismiss Nitish Kumar as the chief minister, they seemed to have no qualms about Prime Minister Narendra Modi and the Bharatiya Janata Party. General Muslim voters, on the other hand, focused more on the anti-minority policies of Modi and the BJP.

While a majority of Muslim voters had good things to say about the state government for its welfare initiatives favouring the community, such as scholarships to Muslim students, salary hikes for madrasa teachers and construction of boundaries around cemeteries, the JD(U)’s decision to pull out of the ‘grand alliance’ in 2017 and form the government with the BJP’s support was generally viewed as an insult to the community’s mandate.

The fundamental issues of alleged corruption, unemployment and development were removed as key concerns for the Muslim community during the poll campaign. These were replaced by their anguish against Nitish over the subject of the contentious Citizenship Amendment Act (CAA) and the proposed National Register of Citizens (NRC).

However, an attempt was made to muzzle the issue by claiming that only Nitish can ‘tame the lion’.

Where the men in the community appeared confused at times, the women seemed to have no doubts at all. They were angry with Nitish and called him a ‘crook’. Keen on ousting the BJP, they were not in favour of solidifying Nitish’s position. 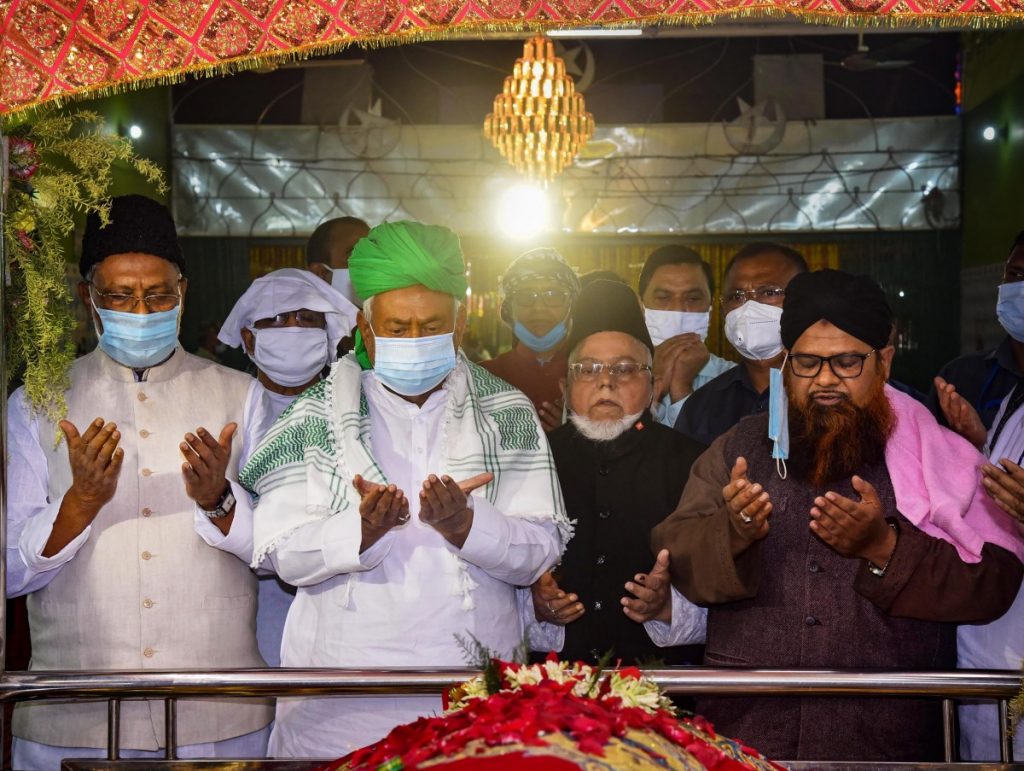 In a desperate bid to woo the Muslim electorate, Nitish Kumar lambasted the BJP, especially targeting Uttar Pradesh Chief Minister Adityanath during the last phase of the election campaign. He also announced that this was going to be his last election. However, this effort seems to have failed to affect those it needed to.

Kudos to Nitish Kumar for calling out BJP/Shah/Adityanath for their divisive & communal CAA/NRC campaign! There is no doubt that BJP/Chirag are trying to damage JDU. Is this Nitish’s way of hitting back? pic.twitter.com/5wJTY8euBe

During the third and final phase, 78 assembly constituencies went to the polls in Bihar. This included districts like Katihar, Purnia, Araria and Kishanganj along with many Muslim-dominated seats in Darbhanga and Madhubani. The Muslim population in these seats is 40 to 70%.

Besides the Seemanchal region, Muslims have not turned to the AIMIM-led alliance as an alternative to the JD(U) or the BJP in Mithilanchal. Talking about the presence of an AIMIM-backed Muslim candidate in Madhubani, local journalist Karim Ullah said, “Initially, the Muslims had drifted away for some time, but the BJP’s recent remarks on NRC united them once again.”

On the question of AIMIM-led alliance, he said, “At first, a shift was noticed, but the Muslims ultimately opted for the grand alliance.”

Note that according to caste equations, about 17% Muslim voters were the dominant electorate on more than 60 seats in the Bihar assembly elections.

It was believed that with the JD(U) and the BJP joining hands, the Muslim block could vote in favour of the grand alliance. But this was not the case in many places. Citing the example of Darbhanga Rural, a young voter Mahmuduzzaman said, “A Muslim candidate from JD(U), who had even given a statement in favour of CAA and NRC, was contesting from here, yet the Muslim votes got divided.”

He believes that the reason behind it was the presence of a Muslim candidate, as well as local politics that pushed the other fundamental issues on the back burner. “The Muslim votes did get divided but the Muslim women voted in favour of the Grand Alliance,” he says.

Also read: Why AIMIM Is Unlikely to Emerge as a Major Force in the Bihar Elections

For Raushan, a member of an Extremely Backward Class, the CAA and NRC issue was the most crucial. But she also talked about unemployment. “There is no work anywhere,” she says. “I have neither a house nor a family. Who will provide me with a livelihood? I can’t even get medical treatment. But he [Nitish Kumar] is only keen on seeing our papers. Where will I get them from?”

“I left all work and joined the protest, sitting there for days,” she adds. “Why is he only targeting the Muslims? It is injustice. It should not happen. What wrong have we done? I will only vote for the one who came to support us during the protest.”

The disenchantment of Muslim women with Nitish Kumar is quite obvious as across villages and mohallas as well as the metros, women have been at the forefront of the protest against the CAA-NRC. Protest against the CAA in Patna on March 8. Photo: PTI

Former journalist and social worker Dr. Ayub Rayeen has been raising the issue of the division of Muslim votes throughout the poll campaign. “The Muslims were inclined towards the grand alliance since the beginning, but the pasmanda, or backward, Muslims argued that the Nitish government had offered a fair representation to the community on many occasions: whether it is the Rajya Sabha, the Legislative Council or the membership or chairmanship of any board. In fact, he even nominated a woman of Ansari community as the candidate.”

He believes that the pasmanda Muslims did not get the attention in the previous Rashtriya Janata Dal (RJD) government. But this resentment could not be translated into votes. He says, “The educated section of the society may have maintained that Nitish treated them with respect, but a segment among them also raised the issue of a necessary power shift. As a result, the pasmanda Muslims had no reason to sit on the fence and more or less voted for the alliance.”

Beyond political questions, as Rais Ahmed, a young voter of the Jale assembly, says, “Muslims primarily voted for peace and harmony.”

Talking about his assembly constituency, he says, “A Muslim was nominated as candidate after nearly 25 years which is why I believe nearly 90% of the votes will go in his favour.”

Rayeen claims that there was no major bifurcation between the backward and the elite Muslims. “There was a concern about CAA-NRC and the youth were in favour of Tejashwi as chief ministerial candidate,” he adds.

Meanwhile, the candidate of the grand alliance, from Darbhanga Urban seat who defected from the JD(U), was accused of lending support to the Triple Talaq Bill and the revocation of Article 370, along with the CAA and NRC.

According to urban voter Arshuddin, Muslims in the area voted for the grand alliance in spite of this, because “there was no other option.”

However, madrasa teachers largely stuck to their allegiance to the JD(U). Madrasa teacher Mohammad Nasirullah says, “We have been watching the goings on for 15 years. The Nitish government did a lot of work for madrasas.”

Was the decision to join hands with the BJP, Nitish Kumar’s biggest mistake? “It may be called a mistake,” responds a science teacher from Darbhanga, Nishat Karim Shaukat. “But the public did get swayed towards the projected Muslim faces of the JD(U), though they were few in number.”

“Muslims have been united on the question of citizenship and the government’s poor handling of the pandemic,” he adds.

A resident of Pura village, Kaleem has been struggling with his job search but says that it is secondary to the fear of the CAA and NRC. Although he was not happy with the three-time MLA and candidate of the grand alliance, he says, “We voted for the party, not the candidate.”

Agreeing with Kaleem, a female voter who requested anonymity says, “We have to change the government. What else can I say? Everyone knows about the problems we face.”

Political activist Irshad Alam, who was involved in the JD(U)’s election campaign in Darbhanga, says, “The Muslims were aware that Nitish ji had launched schemes for the minorities. Take a look at the madrasas and you will see the work done in the interest of Muslims.”

Refraining from making a direct reference to the NRC, he says, “The Muslims should have distinguished between those who made tall claims and those who quietly worked for the community.”

Some Muslims are upset with Nitish but did not completely switch over to Tejashwi’s side. Abul Hayat Shibli, a resident of Shri Rampur village of Benipur assembly constituency in Darbhanga hails Nitish’s tenure. But he says, “The last five years were wasted in political turnarounds which harmed Muslims the most.”

According to him, Nitish as the chief minister of the grand alliance could have been a winning combination.

The question of education and unemployment remained largely absent from the poll rhetoric among Muslims, even though dearth of jobs has been a towering issue in the current assembly elections. A young voter of Darbhanga Rural, Asim Iftekhar, says, “The Muslims are hesitant to talk about the basic issues concerning the community. They only wanted a government that would ensure their safety, a government that does not adopt a hypocritical attitude towards them.”

Nazre Alam, president of the All India Muslim Bedari Karwan, which works towards creating social awareness among Muslims, says, “Muslims faced a major dilemma. If they had not voted for the Muslim candidate in places, they would have been accused of going against another Muslim. In many places, people felt compelled to vote for a particular candidate in order to preserve Muslim representation.”

Alam says the silence on issues like mob lynching, along with the CAA and NRC, is a major concern. “Nitish ji had the madrasa board, the minority commission and the Waqf board to woo the Muslim electorate. Look at these places, where those accused of embezzlement charges have been appointed to top posts. How can such people speak against lynching or other issues?”

“A misappropriation of funds worth crores has been alleged in the madrasa board, but the culprits have got Nitish ji’s patronage. The land of the Waqf board has been sold off. This government has also managed to marginalise Muslims,” he adds.

The question of citizenship has thus taken Muslims considerably away from the Nitish government. The grand alliance has been an option in this regard not because of the famed Muslim-Yadav equation, which would mean that the Congress has managed to regain its old vote bank, but because it is the only alternative.