From the Reliance Infrastructure workers’ arrest to the Naxalite angle, the Bhima Koregaon violence case is mired in multiple theories. 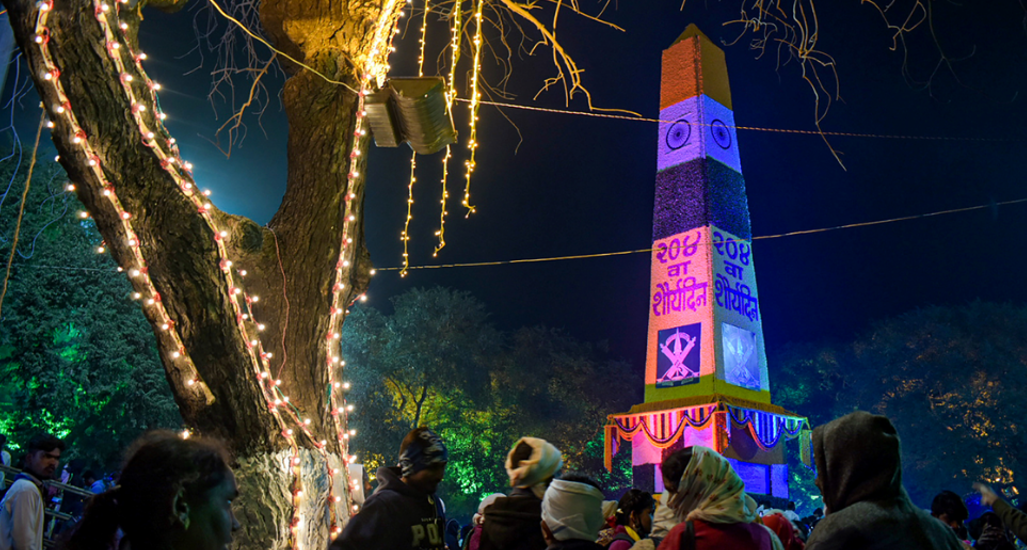 Mumbai: In 2018, months before the Pune police had launched a country-wide raid at the houses and offices of activists, academics and lawyers, the Maharashtra state Anti- Terrorism Squad (ATS) had had rounded up five men – all contractual workers at the Reliance Infrastructure Ltd – for their alleged involvement in the disruption caused at the anti-caste commemoration at Bhima Koregaon near Pune on January 1 that year.

The initial story, however, swiftly changed within days. From probing their “reasons” to be at Bhima Koregaon, the ATS had moved to look at their involvement in protecting and sheltering a person allegedly from the banned CPI (Maoist) organisation. The five arrested men –Satyanarayan Rajayya Karrela, Babu Shankar Buchayya Vanguri, Shankarayya Lingayya Gunde, Ravi Rajanna Maarampalli and Saidul Narsimha Singapanga – had to suffer incarceration for a prolonged time. One of them, Singapanga, was released on bail only three years later, in May 2021.

While granting Singapanga bail, Bombay high court judge Bharati Dangre had noted that she did not find any prima facie evidence to hold him in custody. Others were granted “default bail”, after the ATS had failed to file chargesheet within the stipulated period.

That year was the 200th anniversary of the struggle of Bhima Koregaon, a significant day in anti-caste history. Several lakh Bahujans, especially those belonging to the Dalit community, commemorated the participation of Dalit soldiers who, along with the East India Company, trounced the casteist Peshwa-led army of the Maratha empire in 1818.

Similar to the Reliance Infrastructure workers’ case, there are three more cases registered with different sets of accused but revolving around the violence that broke out at Bhima Koregaon. Four years since, the case dragged on.

This is the fourth year since the attack on the Dalit visitors at Bhima Koregaon. In this article, we take a look at each of these cases, the police’s various versions and their legal status today.

A case mired in multiple theories

Starting with the Reliance Infrastructure limited workers’ case. The five arrested men, all Dalits and from Telangana, worked at the Chembur unit of Reliance Infrastructure. They were actively involved in the Mumbai Electric Employees’ Union (MEEU) work, seeking adequate compensation for workers and fighting for their labour rights. Their activism stuck out like a sore thumb and the management waited for an opportunity to get rid of them. “So, when we were arrested, the management dismissed us promptly,” says Vanguri.

The five workers, all in their late 30s, were active in the separate Telangana movement (for the creation of a separate Telangana state), even though they worked in Mumbai. “We would organise several public meetings and protests in the city,” Vanguri shares. And that made them an easy target, he feels.

The ATS, in the chargesheet, claimed that the five workers, along with one driver working in Dombivili – in the outskirts of Mumbai –provided an alleged Maoist shelter. The alleged Maoist, Ajay Dasari, also from Telangana, was also arrested and later released on bail. “Back home (in Telangana and Andhra Pradesh), those who associated with the Telangana movement were all painted as Maoist supporters. We too became a victim of it,” Babu told The Wire.

Babu, along with 40 other co-workers had visited Bhima Koregaon on December 31, 2017. And the same night, they returned. So, when the ATS arrested five Reliance Infrastructure workers, including Babu, several union leaders had approached the ATS officials to know the reasons for their arrest. “The ATS chief told me that their arrest was not connected to the Bhima Koregaon violence,” says Vasudevan, general secretary of the MEEU.

But Babu says, the line of questioning was all about Bhima Koregaon. “We were asked why we had travelled to Bhima Koregaon, why we attended Elgar Parishad. Why were we fighting for causes of workers outside Reliance etc. Basically, the ATS seemed unhappy with our political and social conviction,” he says.

After the arrests, all their family members were forced to leave the city. The men, however, had to stick around in Mumbai as that is one of the primary conditions of their bail. “The arrest achieved what it had to: break the Union’s work,” he says.

Even as the Reliance Infrastructure workers’ case continued, without much media attention, the Pune police had launched an all-India investigation into what it claimed – the spread of “Urban Naxalism”. Acting on the FIR registered by a Pune-based businessman Tushar Damgude, several teams of Pune police carried out synchronised raids in several cities on April 18, 2018. Organisers of Elgar Parishad, an event held at Shaniwar Wada on December 31, 2017, were questioned, their laptops and other electronic gadgets were seized. The police also targeted human rights activists and lawyers, who had nothing to do with the event.

But it was not until June 6 that year that the police made their first arrests. Five persons – Sudhir Dhawale, Surendra Gadling, Mahesh Raut, Shoma Sen, and Rona Wilson – were arrested in the first round. The Pune police claimed that all arrested persons were involved in “anti- national” activities and were spreading the Maoist propaganda in the urban region. They were called “Urban Naxals”.

The police claimed that the accused persons played a direct role in inciting violence at Bhima Koregaon on January 1, 2018 by organising and participating in the Elgar Parishad event. Only Dhawale and Sen were present at the event.

Within months, as the police’s action intensified, the story slowly started changing. Now, the accused persons, along with six more persons –Sudha Bharadwaj, Arun Feriera, Vernon Gonsalves, Varavara Rao and Gautam Navlakha – were accused of plotting a “Rajiv Gandhi-style assassination” of Prime Minister Narendra Modi. On August 28 that year, the police went to arrest the second group of activists and lawyers but following the interventions in both the high court and the Supreme Court, they were moved into house arrest.

As the Maharashtra police, then under chief minister Devendra Fadnavis-led BJP government, started making newer arrests, the story weaving around Bhima Koregaon too became weaker. The police were no longer focussing on the Bhima Koregaon violence. Newer claims were made every week. The police introduced an “international angle” and claimed the arrested accused were in touch with Maoists from Nepal. Senior Maoist leader Milind Teltumbde, who was killed in an ambush late last year in Gadchiroli, was accused of being the mastermind in the case.

In 2020, as the BJP government fell and the coalition government called the Mahavikas Aghadi (MVA) composed of Shiv Sena, Nationalist Congress Party (NCP) and Congress was formed in the state, the home ministry handed over the case to the National Investigation Agency (NIA). More arrests followed. On April 14, 2020, academic Anand Teltumbde and Navlakha – who had secured a pre-arrest bail – were taken into custody. Singers and anti-caste activists of the cultural group Kabir Kala Manch – Sagar Gorkhe, Jyoti Jagtap and Ramesh Gaichore –were arrested too. Eight-four-year-old Jharkhand-based tribal rights activist and Jesuit priest, Father Stan Swamy, was also among those arrested. Swamy, following ill- treatment in Taloja jail, died on July 5 last year.

Of the 16 arrested, only two persons – Varavara Rao and Bharadwaj –are out on bail right now. It has been over three and half years, the trial is yet to commence.

A look at the initial complaints, registered by two feisty Ambedkarite women – Sushma Ohol and Anita Sawle from Pune – indicates that the Naxalite angle introduced by the police was actually an afterthought.

On December 29, 2017, three days prior to the violence that broke out at Bhima Koregaon village, Ohol, a resident of Vadhu Budruk village, near Bhima Koregaon, had registered a case at Shikrapur police station. Ohol accused Milind Ekbote, a Pune-based Brahmin Hindutva leader and also the founder of the Dharmaveer Sambhaji Maharaj Smruti Samiti, as well as 49 others from Vadhu Budruk village of casteist violence in the village.

This, Ohol had stated, was a start to the violence in the region, including the one at Bhima Koregaon on January 1.

The Shikrapur police, however, did not take her complaint seriously and after the investigation was carried out shoddily, a chargesheet was filed with identical witness statements.

Similarly, in another case registered by Sawle on January 2, she named Ekbote and Shiv Pratishthan Hindustan leader Manohar Kulkarni alias Sambhaji Bhide as the “masterminds” of the attack at Bhima Koregaon. Her complaint had led to the arrest of Ekbote following cancellation of his pre-arrest bail in the Supreme Court. Bhide, however, was never even called for questioning, leave alone being arrested in the case.

Both these cases, handled by the Pune police have been put on the backburner and even after the MVA government came into power, the cases have not been pursued. Bhide, who enjoys clout across Maharashtra’s western region, is believed to be supported both by the right- wing groups and the Congress.

Advocate Nihalsing Rathod, who is representing several arrested activists in the Elgar parishad case, says the confusion and multiple theories were floated only to protect Bhide and Ekbote. “We have from the start maintained that the state should probe their role in the violence and one would be able to establish a direct link. Unless the state machinery does that, innocent people will continue to languish in jail,” Rathod added.

In the Bhima Koregaon violence, several Dalit Bahujans had testified of having seen a large mob carrying saffron flags ransacking their vehicles and attacking them. Stones were stored on the terrace of several buildings and thrown at the gathering. Many travel vehicles were torched and casteist abuses were hurled, they had claimed. These allegations were never probed.

In the violence, a Maratha youth Rahul Babaji Phatangale was killed. The police arrested three Dalit men. Of them one died soon after he was released on bail. The case is still pending in court.

The violence at Bhima Koregaon changed the discourse around the Bhima Koregaon struggle. Once an Ambedkarite congregation, where lakhs of people gathered to pay their tribute to the soldiers who fought for their dignity, is today looked at with suspicion. Barricades have come up at the spot and the entire area sees heavy police presence. Despite the shift in narrative, Ambedkar’s followers continue to gather here in large numbers.