Victims of the violence have alleged that the commission is treating them like criminals rather than witnesses. 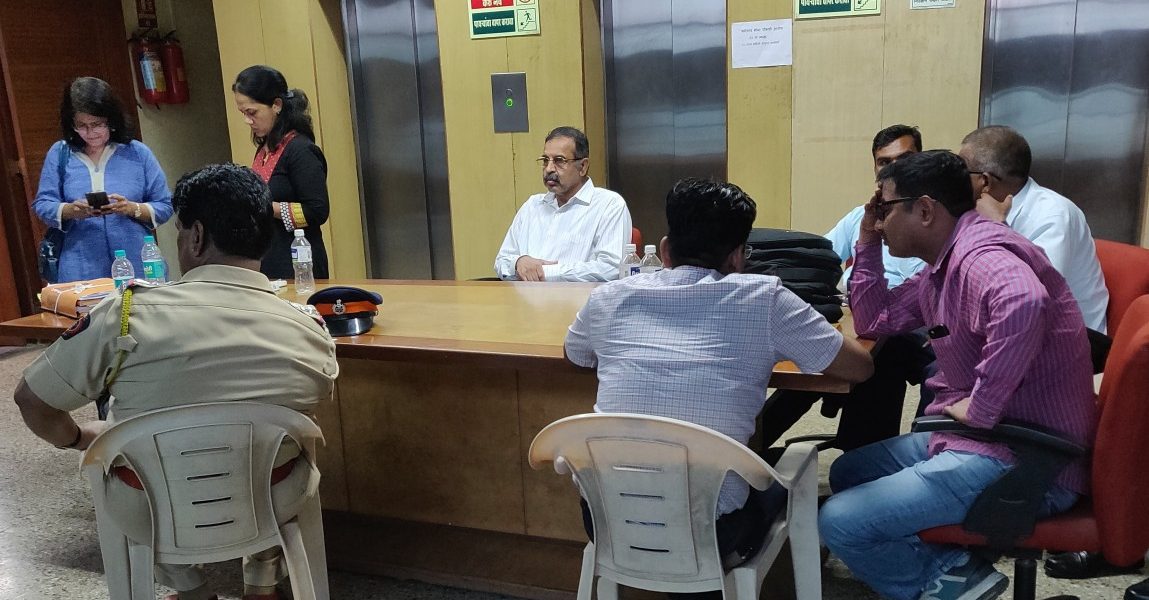 Milind Ekbote, one of the prime accused in the violence at Bhima Koregaon, at the state set two-member judicial commission. Credit: Sukanya Shantha

Mumbai: On June 26, when 44-year-old Manisha Khopkar filed her affidavit before the judicial commission set up to look into the causes for the violence that broke out on January 1 at Bhima Koregaon near Pune and the subsequent reactionary backlash in other parts of Maharashtra, she thought her moment to be heard had finally arrived. The local police at Thane – where she lives – had registered her complaint after much reluctance. Since then, there has been no progress.

In these nine months, Khopkar says, no media house or state representatives had approached her or the 48 others who had been attacked while on their way to Vijay Stambh to celebrate the bicentennial year of the Bhima Koregaon battle.

But the two-day visit to the inquiry commission and the gruelling 12-hour cross-examination by the lawyers, she says, has left her even more crushed. “We were brutalised, our children and old family members were targeted on January 1, and when we went to the police (at Thane), we were told we are lying. I had really hoped this space (the judicial commission) would protect the victims’ interest. But I am left feeling more outraged and saddened by what happened here,” Khopkar told The Wire as she stepped out of the judicial inquiry office at south Mumbai on September 6.

Khopkar had come with two other members of Dr Babasaheb Ambedkar Kalyankari Mandal, an anti-caste organisation working on Buddhist principles. She too has been a part of this organisation for the past two years. Sitting in a packed commission room, Khopkar was cross-examined by senior lawyers appearing for the state and one of the prime accused in the violence, Milind Ekbote. She did not have any legal representation herself.

During the first day of her cross-examination, Khopkar was grilled over her caste location, and Ekbote’s lawyer Niteen Pradhan suggested her caste be mentioned as “Mahar” as against her preferred Buddhist identity. Khopkar had to defend her stand and get the description changed in the commission’s record. During the second day’s session, advocate Shishir Hiray appearing on behalf of the state came equipped with examples meant to dismantle her character before the commission, such as instances of cheques allegedly bouncing.

This left Khopkar puzzled. “I was told the state lawyer was here to protect victims’ interest. But he was questioning me as if I were a criminal and this was some criminal trial against me.” Khopkar feels the two-member committee – headed by former Calcutta high court Chief Justice J.N. Patel with former Maharashtra chief secretary Sumit Mullick as a member – did not come to her rescue. She was repeatedly asked if she feels angered by Brahmins and has hatred festering inside her for the community. Visibly disturbed, Khopkar had to tell the lawyers that the question was inappropriate and repeatedly reminded the lawyers that she was appearing before the commission as a victim of the violence, and not as a perpetrator.

Throughout her deposition, Ekbote, a prime suspect in the violence at Bhima Koregaon, was seated in the room. Ekbote, a staunch Hindutva leader, and Manohar alias Sambhaji Bhide, also a right-wing leader, are allegedly the masterminds behind the violence. Ekbote was arrested in March and let off promptly on bail. Bhide is yet to be arrested.

Further, Khopkar was shown pamphlets of the Elgar Parishad, organised at Shaniwarwada on December 31, 2017 (the day before the caste violence) by the Bhima Koregaon Shaurya Din Prerna Abhiyan. The Pune police have claimed that the Elgar Parishad was behind the violence and has arrested ten social activists and lawyers so far.

Khopkar says all this left her confused. “I do not know what was the need to ask me any of these questions. I was a simple witness who had appeared before the commission. I hoped the state set this mechanism up to deliver justice. All I felt here was humiliation and a deep sense of dejection. An attempt was made to criminalise my poverty and the commission did nothing to protect a victim in its court,” Khopkar told The Wire.

After Khopkar, another member of her social organisation began his deposition. He testified for less than an hour on September 6 and the day later he called in sick.

Khopkar is one of the first of the 12 witnesses to be examined by the commission in Mumbai. Of the 114 affidavits filed for the hearing to be conducted in Mumbai, the commission decided on only 12 witnesses. The reason the commission’s appointed lawyer Aashish Satpute gives for this is to avoid repetition and to include only the directly involved parties. “We have sifted through all the statements and have zeroed down upon those who had directly witnessed or were the victims of the violence,” Satpute told the court. The commission also plans to examine only a few among the other 374 affidavits filed before its Pune office. This decision, many feel, is arbitrary. “For the scale of violence, the number of affidavits filed is anyway very low. Among them too if the commission decides to only focus on a handful of witnesses, the purpose of this inquiry commission is defeated,” said Priyadarshi Telang of the NGO Dalit Adivasi Adhikar Andolan.

“Victims from Nanded or Nagpur can’t be expected to travel to Pune. These statements take days to be recorded. And most from the community do not have money to take care of their stay and food. The commission should have been cognisant that it was set to look into the injustice done to the most oppressed in the society,” said Rahul Pradhan of Yuva Panther, a socio-political organisation from Nanded. While several hundred from Nanded had travelled to Bhima Koregaon village, over 120 youths were booked in the backlash protest that happened on January 3 and 4. Pradhan, too, was booked and kept under preventive detention. Most social activists and victims in Nanded decided to boycott the commission, especially those who were booked in multiple cases.

The state booked over 27,000 Bahujans including teenage boys in multiple cases across the state for allegedly participating in the bandh that was called by several anti-caste organisations. The bandh had turned violent at several places and sections ranging from unlawful assembly to rioting have been applied. Pradhan points out that the violence was a response to what had happened on January 1 at Bhima Koregaon. “But this perspective will be missing from the commission. The state had launched a combing operation against our youth and booked them under multiple cases. Those accused did not come forward to file their affidavits,” Pradhan says.

Also, many among those keen on filing their affidavits failed to do so since the commission had sought the routing of affidavits only through a registered organisation. Telang’s organisation, for instance, which works in Pune and is organically connected with several anti-caste movements, could not have an affidavit filed as the organisation is not a registered trust. One of the victims from Ballarshah in Chandrapur, who lost his eye in an attack near Bhima Koregaon, was turned down by the commission. “They asked him to come through a registered trust. These expectations are unreasonable and not everyone who visits Bhima Koregaon or follows Ambedkar’s principles is attached to some NGO,” Telang adds. Satpute says this was done only to ensure affidavits were received from credible sources. Telang, however, says such presumptions mar the real purpose of the commission.

After completing the three-day hearing in Mumbai, the commission is scheduled to resume its proceedings on September 25. A week after that, the hearing will begin at Pune. After the first three-day hearing of the Bhima Koregaon commission in Mumbai, several rights organisations have decided to send lawyers and social workers to the upcoming hearings to ensure that witnesses appearing are not mistreated or do not have their rights violated.