Between Pollution and Lockdowns, Kashmir’s Beloved Houseboats Are Sinking into History

The roughly 1,500 houseboats that could be found across the Dal and Nigeen Lakes and the Jhelum even a decade ago have now been reduced to fewer than 850. 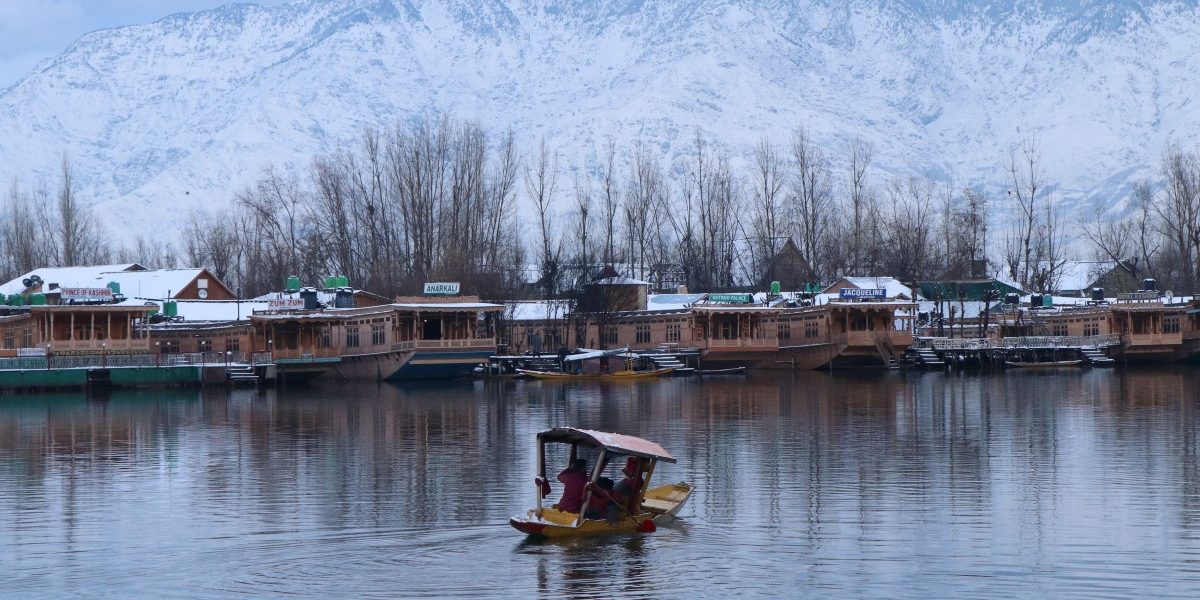 Tourism is the backbone of Jammu and Kashmir’s economy and with the lockdowns keeping tourists away, the houseboat owners have been badly hit. Photo: Kamran Yousuf

Srinagar: Five days ago, at 3 am, Bashir Ahmad, the owner of a houseboat on the river Jhelum in the Lal Mandi area of Srinagar, heard the sound of something screeching. The wind was loud and tempestuous and it was very dark, so at first Bashir thought the screeching sound was due to a brewing storm. But when the sound grew louder and louder, he jumped out of bed and went to see if something was wrong.

“When I got up, I saw water entering our boat. The boat was slowly sinking and the screeching sound came from the ropes that tied the boat to land slowly tearing apart. Hurriedly, I woke my daughters and wife and somehow we managed to get out of the boat before it sank completely. We had a narrow escape,” said Bashir.

Bashir’s boat was not only his family’s home, but also his only source of income. It sank because he had not had it repaired and renovated for a long time. Houseboats have a bottom base that is always on the water and regular servicing and renovations are required to ensure that this base can withstand damage.

“If the renovation of the bottom base is delayed for a long time, the boat becomes vulnerable. It can sink or break down, which not only means the loss of expensive furnishings, but also lives,” said Bashir. “I have lost all the assets I had earned over the years – the expensive furniture for the guest rooms meant for tourists, utensils, beds, clothes and our personal belongings.”

Now split up and staying with neighbours and friends until they can manage to find a new home and source of income, all Bashir’s family can do is contemplate the current sad state of Kashmir’s houseboat industry and hope that the authorities pitch in with real help. There was a time when houseboats were the biggest tourist attraction in Kashmir. Photo: Kamran Yousuf

The beautiful and lavish houseboats that Kashmir is famous for were introduced by the British in the late 19th century as residences and hotels for Europeans who were banned by Kashmir’s Dogra king from owning land in the region.

However, the tradition of living on boats had been prevalent in Kashmir long before Europeans first went there. The boats on which the people lived were called darpad dungas and these were modified into houseboats by the colonial British.

Both before and after independence, the houseboats on the Dal and Nigeen lakes symbolised the beauty of Kashmir. By the late 1990s, there were almost 3,000 houseboats in the region because Bollywood films frequently featured them as places of romance and tourism boomed.

However, even though tourism increased, pollution concerns had come to a head in the 1980s and a ban on building new houseboats on waterways had been imposed. In 2010, the Jammu and Kashmir high court, which is Dal Lake’s legal custodian, banned all kinds of construction in the vicinity of the Dal, including the building of new houseboats. The court also advised the authorities not to renew the licences of the houseboats when they expired without special permission, because of which the owners found it almost impossible to maintain their regular schedules of repairs and renovation.

The pollution concerns that led to this ban are very real. Over the last few decades, Srinagar’s Dal and Nigeen Lakes have shrunk dramatically. According to experts, this is due to encroachment on the lakes and a massive inflow of sewage.

Houseboat owners argued that they were responsible for only 2% of the pollution in the Dal and blamed the other 98% on the residents of the houses by the lake and the hotels that empty their drains into the Dal. However, the ban remained in force and the roughly 1,500 houseboats that could be found across Dal and Nigeen Lakes and the Jhelum even a decade ago, according to data provided by the Directorate of Tourism in Kashmir, have now been reduced to less than 850.

Of these, about 10 houseboats have been damaged in recent times due to natural calamities such as fire, snow, sinking and breakages. Bashir’s boat was just the latest loss.

In May 2021, Manoj Sinha, the lieutenant governor of Jammu and Kashmir, announced a new policy for houseboats that allows their owners to repair and renovate them.

Dr Ghulam Nabi Itoo, director of tourism in Kashmir, said that on the directions of the high court, two committees have been formed to work for the betterment of the houseboats.

“If any boat is damaged, the owner has to file an application for repairs. Then a committee headed by the deputy director of tourism will survey the boat. If the survey report is found satisfactory, it will be submitted to a high-level committee headed by the director of tourism and then permission for renovation will accordingly be granted,” Itoo said.

However, two issues hold back the houseboat owners from initiating repairs on their boats. The first is the length and tediousness of the procedure for permission and the second is the cost.

“We have to seek permission from different authorities and departments including the Lakes and Waterways Development Authority (LAWDA), the Tourism Department and so on,” said Ghulam Rasool Siah, Chairman Kashmir Houseboat Owners Association. “This process is time-consuming. It usually takes more than nine to 10 months to get the permission and in the meantime, the boats are further damaged.”

According to an official from LAWDA, the department is not directly concerned with houseboats, especially those on the Jhelum since they are not registered with them.

The costs of renovation also restrict the houseboat owners from initiating repairs on their boats. Houseboats are made from rare Cedar wood which is mainly found in the forests of north Kashmir and is not easily available.

“Nowadays, the cost of cedar wood is around 5,000 per square foot. We usually need around 1,000 square feet for the renovation of a houseboat, which gets very costly, especially when you add labour charges,” said Siah. 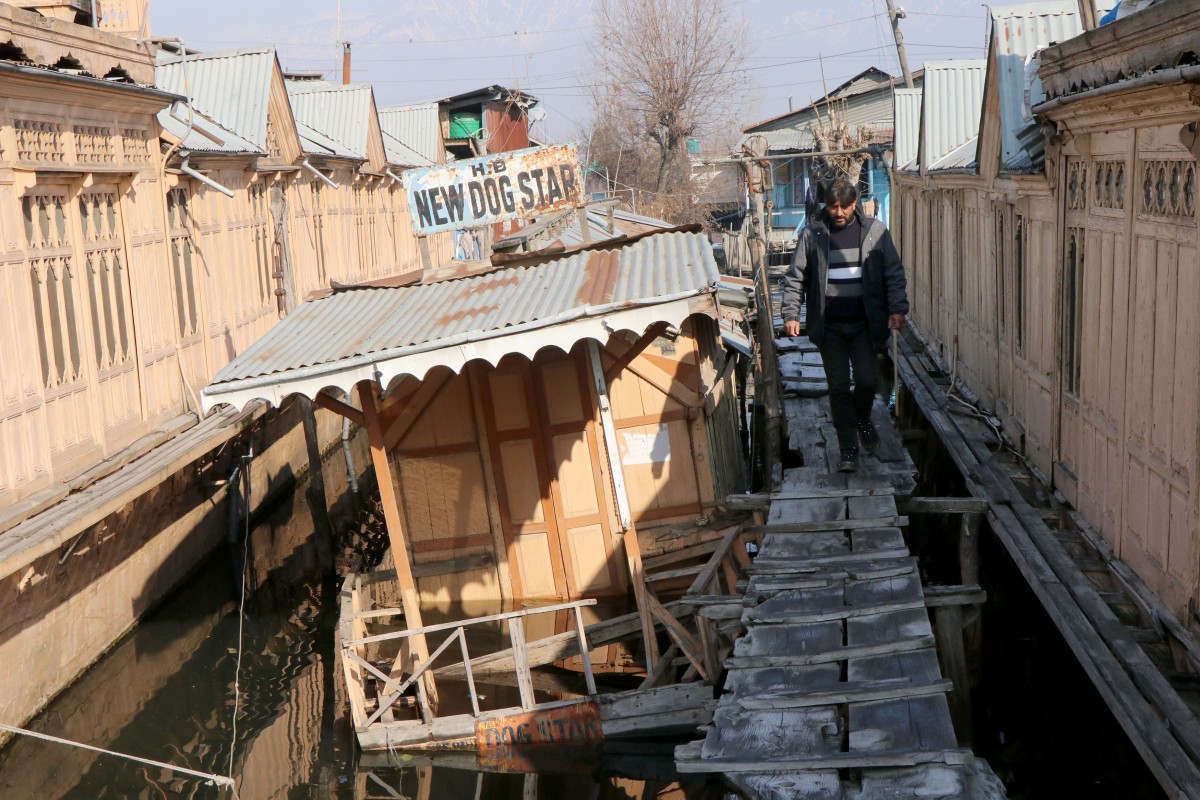 The costs of renovation also restrict the houseboat owners from initiating repairs on their boats. Photo: Kamran Yousuf

The base of every houseboat is made by a specific set of craftspeople, while the upper portions of the houseboats need different skill sets and are built by other craftspeople.

According to Muhammad Ashraf who has been part of the houseboat industry for more than four decades, the craftspeople who renovate the bases of the houseboats charge a labour fee of about Rs 1.5 lakhs.

Thousands of people are associated with the houseboat industry directly or indirectly. Most of them consider it to be their main source of income. But in the last two years, the economy of Jammu and Kashmir has been weakened considerably due to frequent lockdowns since August 2019, first due to the reading down of Article 370, next due to the COVID-19 pandemic.

Tourism is the backbone of Jammu and Kashmir’s economy and with the lockdowns keeping tourists away, the houseboat owners have been badly hit.

“After the reading down of Article 370 on August 5, 2019, Kashmiri people have suffered like never before. The Government of India claimed that the move was for the betterment of the people of Jammu and Kashmir, but in the two years since then, the lack of betterment is quite evident,” said Hilal Ahmad, Bashir’s nephew and the owner of a houseboat himself.

He added: “After this move by the Union government, almost every sector in Kashmir has suffered in one way or another.”

Seventy-year-old houseboat owner Ghulam Nabi Langoo believes that the members of the houseboat association form the worst-hit community in Kashmir.

“We have not been provided any financial assistance by the authorities so far, neither in the lockdown nor apart from that,” Langoo said. “We have not been able to renovate our boats for years now, not even the bottom base. This has made them more vulnerable to damage. We are scared of normal wind speeds. Also, the newly-introduced motorboats in the Jhelum produce waves in the water which can make houseboats sink.”

According to Langoo, houseboats provide employment to thousands of young people in Kashmir. Since the union territory had no industries, there is massive unemployment and the economy mostly depends on tourism.

“Right now, when we have nothing to feed our family, our son goes out to pull carts and escort people around the city. He earns a little by doing this, but not enough even for one good meal,” said Langoo.

Five days have passed since Bashir’s boat sank, but his family has not received even commiseration, leave alone financial help from anyone.

“Nobody has come to visit us, neither the elected members of our own houseboat association, nor anyone from the authorities. They only remember us when they need votes, after that we are left to fend for ourselves. Nobody even cares whether we have something to eat or not. It is their responsibility, but they have failed to do their duties and we are handed over to fate,” said Hilal.

According to Dr Itoo, the compensation and rehabilitation of Bashir’s family will be settled by the state disaster relief fund and the district administration. He added that the motor boats on the Jhelum were introduced under the smart city project and the tourism department is talking to the smart city authorities to sort out the problems related to them.

Also read: Between the Lines of Pakistan’s Kashmir Rhetoric Is an Opening for Diplomacy

Death of an industry?

There was a time when houseboats were the biggest tourist attraction in Kashmir. But over the years, the industry has been quietly dying out and according to the houseboat owners, unless the policy-makers think seriously about regenerating this symbol of the region’s cultural heritage, there will soon be no houseboats at all on Dal Lake, leaving hundreds of households suffering.

“This is the real cultural heritage of Kashmir,” said Siah. “Houseboats created tourism in Kashmir and if the authorities want to preserve them for the next few centuries, it is high time for them to think seriously about working for the betterment of the industry. Simply setting up committees and making statements won’t work. We want the work on the ground to be done.”

Arjumand Shaheen is an independent journalist.