Bengal: The Story Behind the Arrest of Activists Objecting to Deocha Pachami Coal Mine

While the protest meeting itself was peaceful and without police presence, trouble started as the protesters returned home and nine people were arrested. 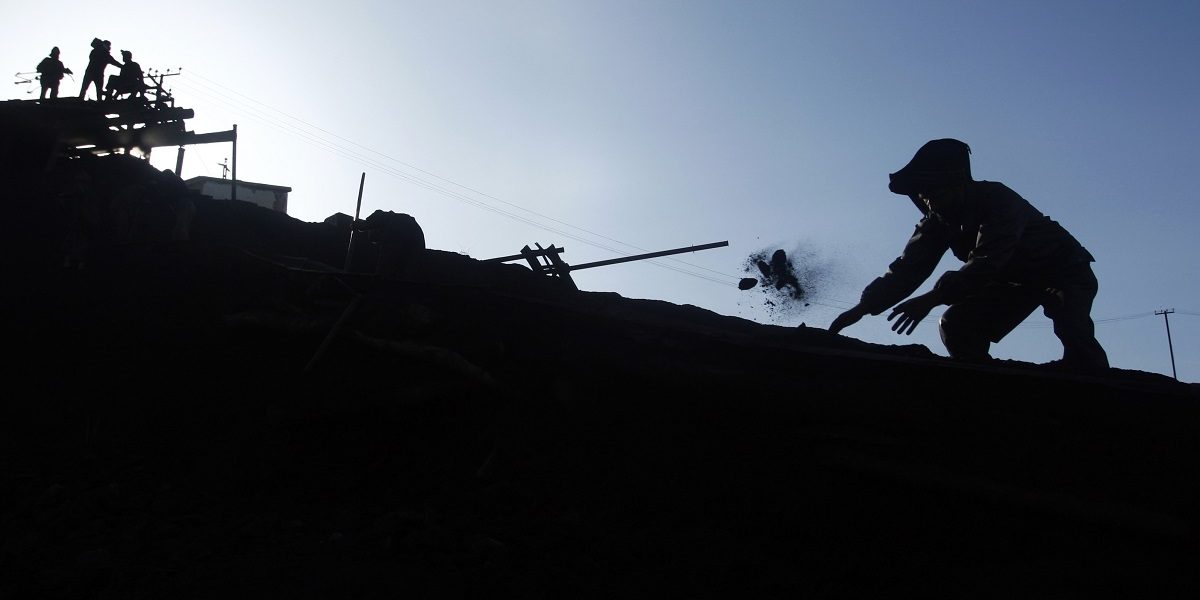 Those who attended the protest claim that it went by peacefully, with no police presence. Photo: Reuters/Ahmad Masood/Files

Kolkata: On February 20, the ‘Birbhum Jibon, Jibika O Prakriti Bachao Maha Sabha’ (Birbhum Association for Saving Life, Livelihood and Environment), an association of the indigenous people of Birbhum, organised a protest action at Dewanganj football ground against the Deocha Pachami coal mining project in the Birbhum district of West Bengal.

Deocha Pachami, spread over an area of 12.31 sq. km, is touted as the world’s second largest greenfield coal block, with estimated reserves of around 1,198 million tonnes of coal and 1,400 million cubic metres of basalt.

The indigenous people of Deocha Pachami want the coal mining project scrapped. Before its protest on February 20, the association invited various socio-economic and civil society forums to a press conference at the Kolkata Press Club to announce the protest and to explain its point of view. Seeking answers to crucial questions, The Wire also attended this press conference.

Why are the locals protesting against the mining project?

The agitated locals of Deocha Pachami are against the mining project for three reasons. First, they will be displaced from their homes; second, there were irregularities in the acquisition of land for the project, which violate the existing land acquisition laws; and finally, the environment will be irreparably damaged.

Ganesh Kishku (36), who has six bighas (40,560 square metres) of farmland where, along with paddy, he grows vegetables or lentils, is firmly against the coal mining project.

“We have been living here for generations,” said Kishku. “Who would leave their home and land for an unknown place with an unsure future? People here are primarily dependent on farming and stone quarrying for their living. We are happy with this life, so 90% of the locals are against the mining project. Only workers of the Trinamool Congress (TMC) and some corrupt people bought over by the TMC support the project for their individual gain.”

“The proposed coal mines will disrupt and pollute the local environment in and around the project area, adversely affecting public health and social life,” Kishku added. “Rivers, canals and agriculture far beyond the mining area will also be affected. These losses cannot be compensated for with cash or jobs.”

According to government estimates, the project is likely to displace around 20,000 people living in 4,300 households. Of the total affected population, approximately 50% and 18% are from the Scheduled Tribes (ST) and Scheduled Caste (SC) communities respectively.

The project was announced in July, 2020, in the midst of the coronavirus pandemic-induced lockdown in the country. On that day, West Bengal chief minister Mamata Banerjee tweeted that the residents of Mohammad Bazar Block in Deocha were consulted and the entire coal mining project was explained to them.

Chief Secretary Shri Rajiva Sinha ji, other senior state & district officials have held detailed consultation with the people of Md. Bazar Block at Deocha. The entire coal mining project was explained at length & all queries by the relevant stakeholders were addressed. (1/2)

More than a year later, on November 8, 2021, Banerjee assured the legislators in the state assembly that there would be no forcible acquisition of land, as had happened in Singur and Nandigram in 2006-2007 during the rule of the Left Front.

However, residents of Deocha allege that the government did not seek the consent of the local people on whether there should be a coal mine project at Deocha-Pachami.

“Not a single person from the state administration ever contacted us or informed us about this project. Even now, whatever we know about the mining project is through reading and watching the news. Decision-making at the village level through the Gram Sabha or Gram Sansad has been totally subverted,” said Kishku. “The Birbhum district administration is working hand-in-glove with the local police and TMC party workers to pressure and coerce the villagers into accepting the project through intimidation and disinformation. People are being forced to accept what the state government and the ruling party is imposing from above.”

When economist and social activist Prasenjit Bose filed a Right to Information (RTI) query that asked for records of public hearings, copies of the feedback from local households and whether the would-be affected families had consented to being displaced, he received this response from the state government: “…the said improper application has not been accepted.”

What happened at the February 20 protest meeting?

A night before the meeting however, the police denied permission for the meeting via a WhatsApp message, stating that the owner of the land objected having the protest on his property.

On the same night, TMC supporters tried to stop Avik Saha, the national president of Jai Kisan Andolan, from attended the protest meeting where he had been scheduled to speak.

Saha tweeted about the incident, saying that he will not be stopped from attending the rally anyway.

A band of a hundred TMC supporters stopped me at Kopai & shouted slogans asking me to leave Birbhum. They refused to allow Jai Kisan vehicle to travel.

We will not be deterred by lumpens. Will attend the Protest Rally on 20th Feb@_YogendraYadav@MamataOfficial@derekobrienmp

The following day, the protest meet took place peacefully. Locals confirm that there was no police presence. About 700 people, mostly locals, attended the meeting. The organisers confirmed that about 35-40 people from Kolkata and surrounding areas also attended the protest meet, expressing their solidarity with the association’s protest.

No untoward incidents occurred during the course of the meeting and it ended peacefully. However, while returning home, the people who had come from Kolkata had their vehicle stopped near the highway, about 2 km from the venue, and were manhandled by TMC workers and supporters in the presence of Sunil Soren, a resident of the area.

Locals who had attended the meeting rushed to the rescue of the people from Kolkata. After a brief scuffle, the vehicles were allowed to depart. The locals brought Soren to the meeting ground and abused him for his action.

However, the people en route to Kolkata were stopped again in Deucha Barrage by a mob of unruly TMC supporters, under the alleged leadership of local TMC leader Kali Banerjee.

“A mob of around 100 TMC supporters and workers quickly gathered around the car, tried to break the glass and started threatening us,” said a social activist who had been in the vehicle.

The activist added, “The numbers kept swelling and at one point there were over 230-250 people. They started to hit us and pull at our clothes from the car windows. By this time, we had been able to contact the superintendent of police (SP) in Birbhum and had asked for help. The SP said that we had created a ruckus and were now trying to run away.”

“Almost an hour later, the police arrived and drove us to the Mohammed Bazar police station. After five or six hours of waiting and interrogation, the police said they would release us. But then they said that we were at risk because of the mob and so they would escort us to the border of Birbhum. A force from the Siuri police station arrived at Mohammed Bazar station to escort us. They separated us, put us in different police cars and then started driving towards Siuri. After crossing the Mayurakkshi bridge, the police cars stopped. We remained there for more than an hour. Later the police drove us to the Siuri police station, where the officer in-charge informed us that we had been arrested. It was 2:30 am,” the activist said.

Why did the police arrested the protestors?

The police have, so far, not revealed why the social activists who had attended the protest meeting were arrested.

“Having spent time in the field in the project affected area, it is clear to me that a large majority of the local population is opposed to the coal mine project,” said Prasenjit Bose, one of the nine people who had been arrested by the Mohammed Bazar police after attending the protest meeting.

Bose added, “The government never bothered to seek their consent for the project in a transparent, democratic manner before announcing the so-called compensation package. This has angered the locals, both adivasis and other sections, who are apprehensive of large-scale displacement, livelihood losses and environmental damage.”

The nine people arrested after they attended the meeting were charged under Sections 307 (attempt to murder) and 364 (kidnapping or abduction of a person in order to murder) of the Indian Penal Code.

On March 1, the district court granted bail to all the nine on the condition that they physically return to the Mohammed Bazar police station every week for the next two months.

In the bail order, the judge came down heavily on the local police. The bail order said: “It was totally unlawful for the officer-in-charge of the Mohammed Bazar Police Station who was on duty to assign the investigation of both the cases to two different Investigating Officers (IO), out of which one is a witness …  IO of Mohammed Bazar Police Station, who has sought for the production of a warrant for the accused persons, failed to make a single prayer before the court as to the justification of the detention of the accused persons either in police custody or in judicial custody.”

When The Wire spoke to Nagendra Nath Tripathi, the superintendent of police at Birbhum, he said, “Police has framed charges which they deemed right and accurate. These people came to disturb and instigate the tribals of that area, which is why actions have been taken.”

Bose refuted Tripathi’s statement. “These are patently false and fabricated charges,” he told The Wire.

Bose added, “The protest meeting at Dewanganj village was a peaceful assembly and there wasn’t a single untoward incident during the course of the three hour-long event. Local TMC leaders started the trouble after the meeting was over, when they started physically stopping and heckling people on their way back from the meeting. The entire episode smacks of a sordid conspiracy hatched by the TMC leaders and the police to frame the victims of violence as the accused, while shielding the actual perpetrators. We were arrested on trumped-up charges to scare the protesters and disrupt the fledgling movement. In effect, the opposite has happened. The movement has gathered momentum and it will spread in the days to come.”