Candidates who cleared the Staff Selection Committee test say the state government has not followed the guidelines for filling vacancies. 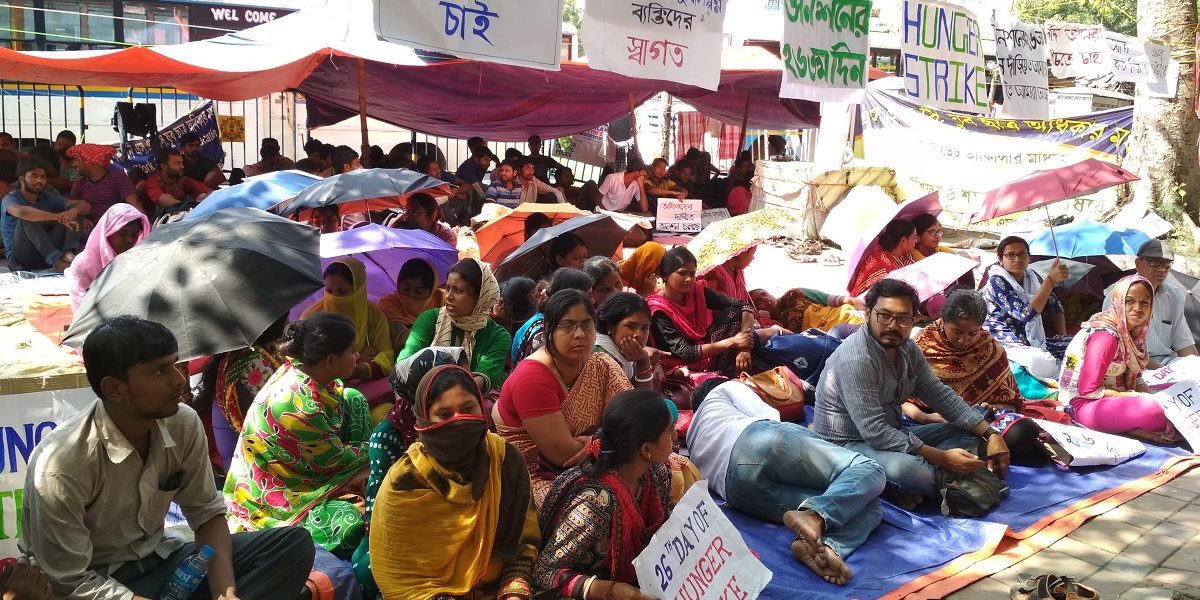 Kolkata: With the first phase of polling for the general elections barely two weeks away, political parties are busy campaigning. In the midst of this political humdrum, about 400 qualified aspiring teachers have been on a relay hunger strike in Kolkata since February 28.

Candidates who cleared the School Service Commission (SSC) exams in 2016, but are on the waiting list for recruitment have been part of the strike. They are demanding that vacancies be filled immediately in the state’s government schools.

On Monday, the demonstration crossed 600 hours. Many of the participants are falling ill and some have already been admitted to hospitals. However, they stand united and determined in their fight.

A 29-year-old woman from the North 24 Parganas district had to discontinue the strike after she fell ill on the 21st day. When she was admitted to the hospital, doctors confirmed she had a miscarriage. Another would-be-mother left the protest site after a health complication; her husband is continuing the protest on her behalf.

Tania Seth, a Sanskrit graduate from Ranaghat, took five saline drips. She has been seriously ill for the past two days. Speaking to The Wire, Seth said, “I don’t care about my health now. All I need to know is what will happen to my future.”

“Our demands are reasonable. We want the commission to follow the guidelines as per the gazette notification issued by the school education department,” Seth explained.

Anita Mondal, another aspirant, accused the state government of corruption. “It’s not just about the job, it’s about a corrupt system,” Mondal said. Questioning the lack of transparency, she said, “No one knows the exact number of vacancies. We do not know the score of a person who has been appointed or how many more will be appointed.”

Partha Chatterjee, West Bengal’s education minister, met the protestors on March 2. He said, “Those qualified will certainly be called for an interview. But those who are not eligible can’t get a job by staging a protest.”

Later that week, a five-member team of demonstrators met the minister, but a solution could not be reached. Chatterjee formed a high-level panel under the chairmanship of principal secretary Manish Jain, which was asked to submit a detailed report within 15 days.

Another agitator, Sharmila Mondal said, “We won’t call off the protest until we receive a written assurance from the government.”

Their demands include notifying the exact number of vacancies in the state-aided schools and publishing the merit list of candidates who have qualified, along with the details of marks obtained.

According to the gazette notification issued by the state’s school education department, ‘merit list’ is: “a list of candidates prepared category-wise on the basis of marks obtained by a candidate in written test, in academic and professional qualification and in the personality list.”

The gazette also says the commission needs to update vacancies in schools 15 days prior to the written SSC exam.

Pushpendu Nandy told The Wire, “We are seeking transparency, not jobs. We request the commission to follow the gazette notification.” Nandy, a history graduate, said the commission has violated the prescribed rules. “We suspect that many candidates were appointed through the backdoor,” he said. 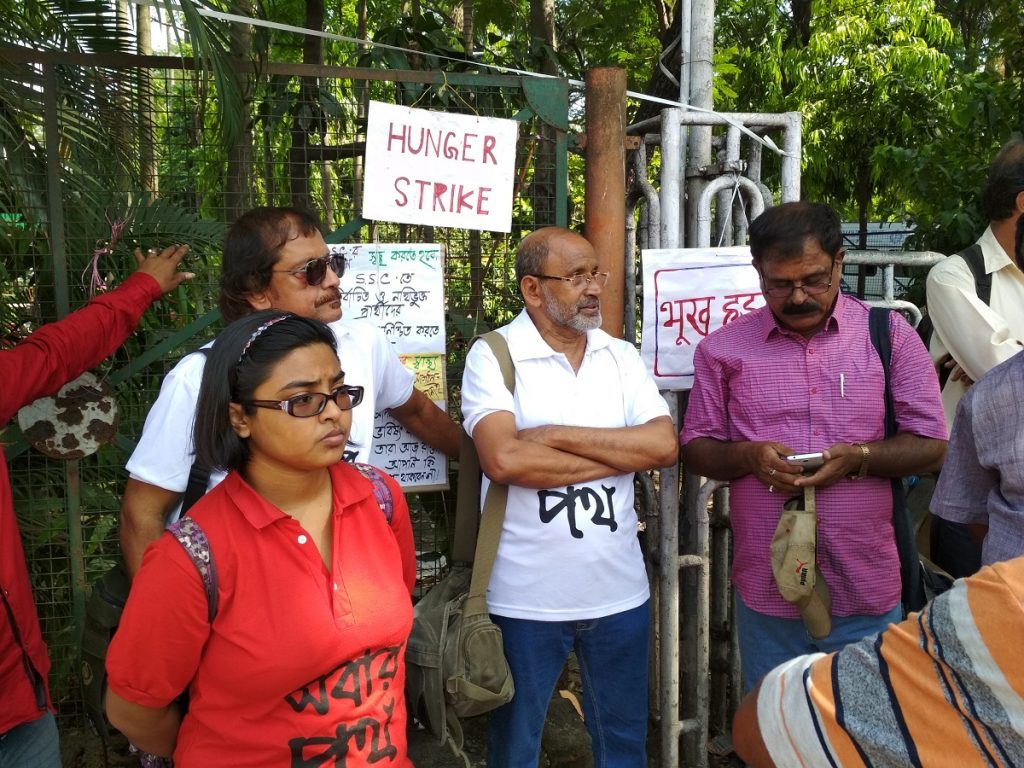 In January, the Calcutta high court asked the state SSC to submit the ‘merit list’ within 24 hours.

Hearing the plea, Justice Rajasekhar Mantha said, “The SSC will have to produce the merit list it claims to have published, in the court by Tuesday. If the court finds that the list you have published is merely a panel of candidates, the court will send SSC officials to jail.”

The matter was disposed of after the commission published the ‘merit list’. However, the protestors claim that the list was not published in accordance with the West Bengal government’s gazette notification.

One of the demonstrators, Kalyan Kundu told The Wire, “The commission published the merit list, but did not provide the break up of marks nor the cumulative score.”

Political leaders including Left Front chairman Biman Bose and CPI(M) leader Sujan Chakraborty visited the protest site. After interacting with the agitators, Bose told the media, “The government should resolve the crisis before anything untoward happens to these future teachers.”

The BJP’s national secretary Rahul Sinha and state president Dilip Ghosh also met the demonstrators. Attacking the Mamata Banerjee government, Rahul Sinha told the media, “Government seems to be indifferent with the future of education in the state. The situation is such that without paying money to the TMC, one can’t get a job.”