The BJP and Congress are on the same page when it comes to treating Adivasis as less than citizens. A memorial for those killed in Silger last year. Photo: Nandini Sundar

A year has passed in the life of this country, an entire year of people putting their lives on the line in peaceful protest, an entire year without justice. A year of young people showing the way to hope and a year of old and cynical politicians pointing the other way to despair.

For a year now, young people – of whom the eldest is a mere 23-year-old class-12 graduate – have been leading a heroic, non-violent struggle in Silger, where people offer dharna outside a CRPF camp. These are all poor Adivasi villagers who take time off from their daily-wage labour or farming, students who come when school permits, or women who bring their children because they have nowhere else to leave them. On down days the numbers may be a few dozen, on special days the number swells to thousands.

This has sparked off similar struggles elsewhere across the districts of Bijapur, Sukma and Dantewada as well as northern Bastar/Kanker in Chhattisgarh, protesting against the security camps that have colonised the landscape, the fake encounters, arrests and injustice that have become woven into everyday existence in this region.

On May 17, 2021, the CRPF killed three persons, a 14-year-old named Uika Pandu and two other men, Kowasi Vagal and Ursa Bhima. A pregnant Punem Somli died after stampede injuries. Some 40 other people were also injured. The problem started when the CRPF established a camp at Silger on the night of May 11 without informing the villagers, something that is actually illegal under the Panchayat Extension to Scheduled Areas Act (PESA) 1996. People from Silger and neighbouring villages marched to the camp to protest peacefully, resulting in the CRPF firing. Was the CRPF panicking at the sight of people resisting in such large numbers or were they just firing in cold arrogance? A year later, we still don’t know because the magisterial enquiry promised by the state government which was to submit its report within six months has still not delivered. In any case, does it even matter when the government has no interest in providing justice?

Two judicial enquiries by a retired high court judge into the mass killings at Sarkeguda and Edesmetta in 2012 and 2013 respectively, both under a Bharatiya Janata Party regime, have shown that the CRPF killed innocent villagers. Seventeen people, including minors, were killed in Sarkeguda and eight people in Edesmetta. As is usual, the CRPF tried to pass it off as killings of Maoists or shooting in self-defence, even though, as the judicial enquiry found in Sarkeguda, there is no evidence of Naxal presence, leave alone firing at the time.

The Central Bureau of Investigation, acting under Supreme Court directions, found in 2016 that the security forces had burnt over 300 homes in Tadmetla and neighbouring villages and charge-sheeted some auxiliaries. But has the Congress government of Chhattisgarh, which came to power in 2018 and swept the Adivasi belt of Bastar promising justice and change, done anything on these fronts? The answer is no. Even the promise to decongest jails and release the hundreds of prisoners arrested on flimsy suspicion of being Naxalites has come to nothing.

The Congress hoped to get political mileage in the Punjab elections by supporting the farmers’ year-long agitation for repeal of farm laws. But in Chhattisgarh, where they are in power, they have been deaf to the appeals of their own farmers. In election-bound Gujarat, the Congress says Adivasis have rights on natural resources and should not be displaced. But in Chhattisgarh, permission to mine has just been granted by the Union and state to the Parsa coal block and phase 2 extension to the Parsa East and Kente Basan Coal block in the Hasdeo Arand forest, despite sustained local protest against the destruction of biodiversity and livelihoods. At a time when climate change is making coal unpalatable, the Congress and BJP are collaborating to favour Adani, even if the ostensible reason is supplying coal to Rajasthan

The 2005 state-sponsored vigilante movement, Salwa Judum, was a co-partnership of the then UPA government at the Centre and the then BJP government in Chhattisgarh. Hundreds of villagers were burnt, thousands of people were killed, and the toll in sexual harassment remains unaccounted. After the Supreme Court banned the use of surrendered Naxalites as Special Police Officers under any name in 2011, both Congress and BJP collaborated in the assembly to pass an Act changing their name to Armed Auxiliary Forces and giving them a pay rise and more deadly guns. They now continue as District Reserve Guard (DRG). 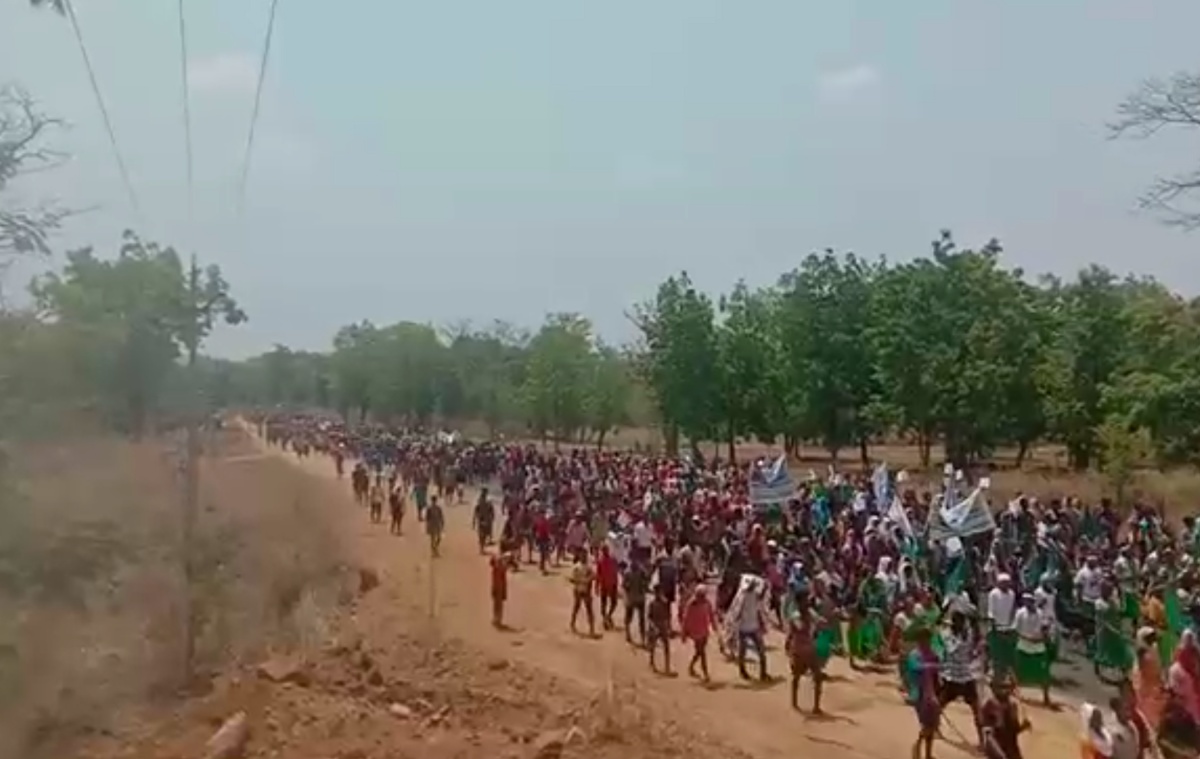 In 2022, the BJP and Congress are once again on the same page when it comes to treating Adivasis as less than citizens. On the night of April 14-15, several villages in Usoor and Konta blocks alleged seeing flashes of fire and hearing loud noises. The next day explosive remnants were found in the forests. Given that both people and cattle use the forests extensively – this is peak mahua collecting season and a time when cattle are let loose after the harvest – it is perhaps sheer luck which prevented deaths. The police have denied that any drone attacks were carried out, but have also not explained the ordnance remnants.

For decades now, the public at large has been asking for peace talks. The Maoists have responded positively to chief minister Bhupesh Baghel’s recent offer with the condition that their jailed leaders be freed to hold talks, UAPA be lifted on their fronts, and security forces withdraw. Predictably, while refusing talks with preconditions, Baghel has put forth one of his own – that the Maoists must affirm their faith in the Constitution.

For over a year now, the Silger youth and the villagers of Bastar more widely have been publicly affirming their faith in the Constitution, through their peaceful protest. They tried to meet the governor to hand over a memorandum but were arrested before they could reach Raipur. They came to Delhi in March to meet statutory authorities like the National Commissioner of Scheduled Tribes and the Minister of Tribal Affairs, as well as Congress leaders, but could not get their time. Visitors to rallies in Silger are routinely stopped by the police and CRPF, despite the constitutional right to freedom of movement. A year on, the demands for justice for the much-mourned innocent dead of Bastar remain unmet.

Is faith in the Constitution reserved only for citizens while the government can do whatever it wants to flout it?

Nandini Sundar is the author of The Burning Forest: India’s War in Bastar.