The Bangladeshi photographer had been critical of the Indian government – a stance which has cost him a visa earlier too. 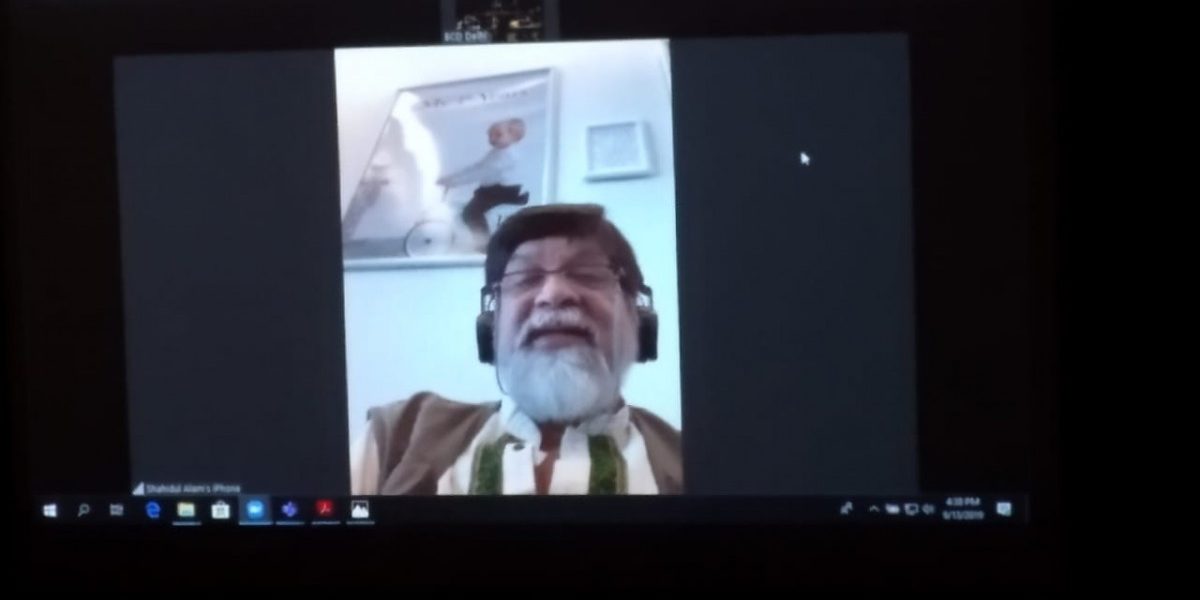 Shahidul Alam speaks over Skype on September 13. Photo: The Wire

New Delhi: From a waiting room at London’s Heathrow airport, with children’s toys scattered all around him, a cheery Shahidul Alam addressed an event at the city’s British Council via Skype.

This was not the medium through which Alam had planned on addressing the audience.

Alam was to have spoken on the relationship between politics and art in person. But for reasons unknown, he was denied a visa to India.

So he improvised with what he could. He addressed the audience via Skype and took questions via WhatsApp.

All this work-around meant that the 2018 Facebook post he had made was still alive in the memories of authorities.

A Bangladeshi photographer, Alam had been jailed for over 100 days last year by the country’s government, over a Facebook post in which he had been critical of the state. The 63-year-old was TIME magazine’s ‘person of the year’ for 2018. The magazine said he had gone from “photographer to prisoner.”

Over a connection which cracked often, Alam addressed the packed hall, talking about his work and going through a slide-show of some of his photographs, which were projected on the screen. There was one photo he took of a group of Rohingya people. He also showed an image from an exhibition about Kalpana Chakma, a woman who went missing in 1996, and was apparently abducted by the army.

Alam also spoke about his time in jail in Bangladesh. “I used that time productively. I convinced the wardens to let us paint. The various prisoners and I made 33 murals. There is a gallery now in that jail.”

He then displayed a photo of a boat, which also inspired a mural that was painted by those in prison with him. “This is by far the photo I am most proud of,” said Alam. 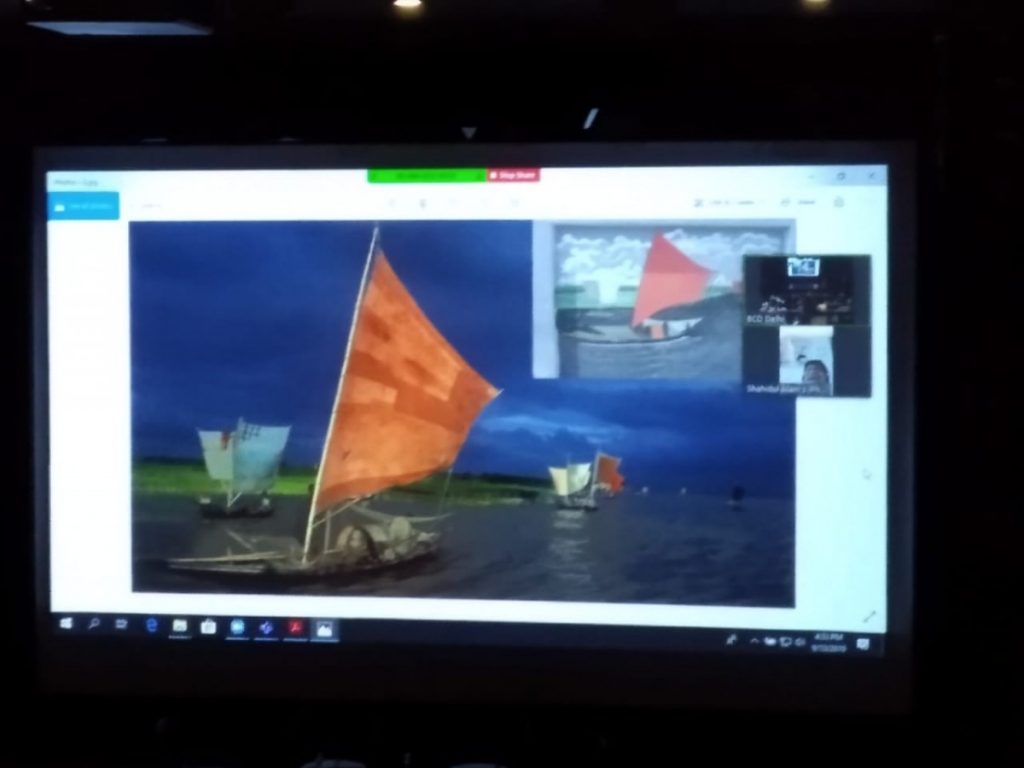 Alam projects the photograph of the boat and the mural of the photo in the prison he had been at, on the screen. Photo: The Wire

He also spoke about how tough it has been to find galleries to exhibit the art of people like him and described an incident from many years ago when he wondered if he could hold an exhibition in a mosque. He said he had looked into history and seen that mosques had been used for versatile purposes. Alam managed to convince the heads of one mosque and organised an art exhibition there. “People of all religions and sexualities came,” he said.

Shohini Ghosh, the event’s moderator, said that the fact that Alam used spaces like jails and mosques for art meant that there are spaces still available and spaces still left to conquer for the arts. Ghosh is a professor at Jamia Millia Islamia University.

By then, the audio was choppy for Alam, so conversation moved to WhatsApp, on which Alam took a question from this reporters as well: Has his unique situation impinged on his art, does his art profit from this?

Alam replied that his life has changed dramatically since he was imprisoned and then released. “A woman came up to me with a child and asked me to bless him. She said she wanted him to grow up to be like me. I found it very powerful. We think we should keep our head down but there are people wanting to revolt.”

“I should thank the Bangladesh government,” he added.

Before the controversy, he said, some people abroad and some from Bangladesh’s creative circles knew him for his work. After his release, the equation changed. People on the streets sometimes hugged him with tears in their eyes, saying that his case had touched their lives.

The controversy has also been challenging, because while previously he would bicycle or walk to meet people, talk with and photograph them, now Alam says he doesn’t travel alone and is constantly reporting back home.

“We need to ensure our governments don’t get away with keeping us all separate,” he said, ending his presentation.

Replying to subsequent emails from The Wire, Alam said he did not know why his visa was denied and he was not given an explanation. “I can only surmise. Several other prominent citizens have been denied visas. All of them have been critical of the Indian government.”

He recalled that in the early 2000s too, he had been “consistently” denied an Indian visa for many years. This was after he exhibited work done by children born in Sonagachhi, Kolkata’s red-light district.

Alam would now catch the connecting flight from London to Germany where he will work. Next, he will attend the UN General Assembly in New York. He had planned to make a quick stop in Delhi for this talk, but the plan had to be scuttled over the visa denial.

The panel discussion in Delhi today was part of a day-long series of talks by the Serendipity Arts Festival and Alkazi Foundation. Alam was on a panel titled, ‘Political Dimensions of (Arts) Practices.’ The other panelists were Shohini Ghosh, Ashmina Ranjit and Sudhanva Deshpande.

Why was Shahidul Alam in jail?

Last year, Alam live-streamed a video on Facebook where he spoke about student protests in Dhaka and about how he alleged he was attacked by members of the ruling party when he attended the protests. He said they broke his camera while he was filming the protests. He had also spoken to Al-Jazeera around that time, speaking critically of the government.

The student protests had been over the demand for safer roads after two young people were killed in a road accident last July.

Alam was arrested on the allegation of spreading “propaganda and false information”.

In November 2018, Alam was granted permanent bail in Bangaldesh after 102 days in custody. Last month, Bangladesh’s Supreme Court upheld a lower court’s stay order on further probes by the government against the photographer.

“Had there been any evidence, it would have been in the public domain. Yet, over a year after my arrest, torture and period in jail, the prosecution has not even been able to frame charges. I salute the judiciary for their independent decision. They are the one of the few hopes that Bangladesh has left,” Alam had told The Wire, after the court ruling.