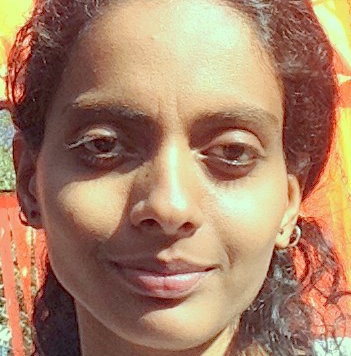 Pandariya (Chhattisgarh): Protesting against their likely displacement for developing the Kanha-Achanakmar tiger reserve corridor, more than 300 Baiga adivasis from around 20 villages held a two-day long march in western Chhattisgarh. Covering a distance of around 70 kms, the adivasis walked from Bahpani village in the Daladali hills to Pandariya town in Chhattisgarh’s Kawardha district. The march that began on March 17 was concluded with a Baiga assembly at Gandhi chowk on March 19.

The major concern they raised was the frequent threats they receive from forest department officials to vacate their homes as the forests are proposed to be developed for the tiger corridor.

“There is no written communication yet to the village residents about displacement. But, forest department officials have carried out a survey here and they keep telling people that the area will be earmarked into a corridor for tigers and that they would have to eventually shift,” said Naresh Bunkar from Gaon Bachao Samiti, who organised the march. 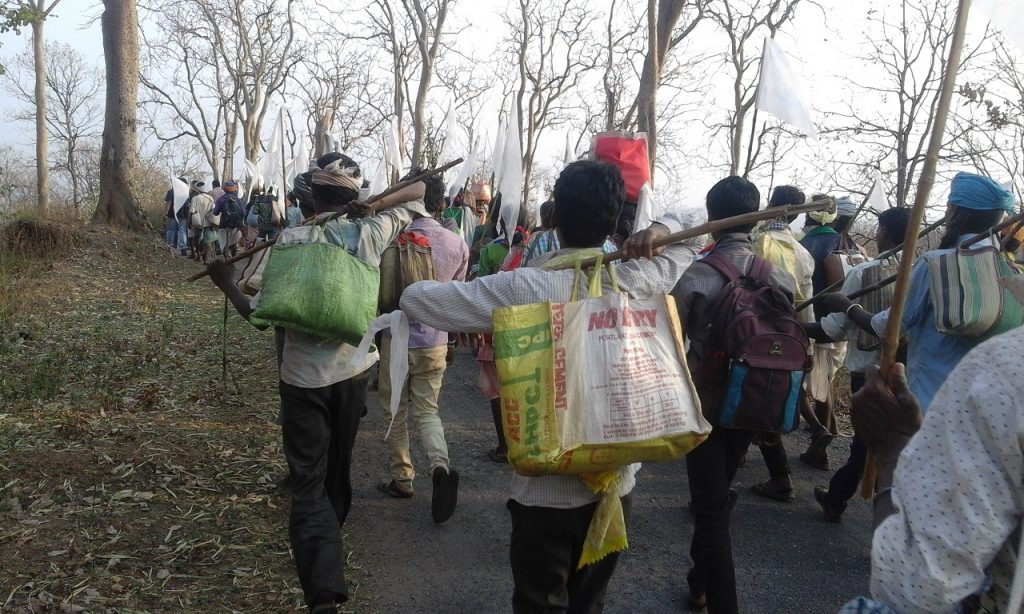 Each individual carried 2 kgs of rice and water for the two-day march.

Carrying 2 kgs of rice, plates, tumblers and blankets, the adivasis walked for more than 6 hours on both days to reach Pandariya. Many of them also walked barefoot.

On day one of the march, March 17, however, officials of the Pandariya sub-division sought to stall the march by detaining three of the Gaon Bachao Samiti members.

But, in spite of intimidation by the state administration, the Baigas did not budge and came out in large numbers to march for their demands.

Another demand that was put forth vociferously was to recognise their community forest rights and the right to habitat under the Scheduled Tribes and Other Traditional Forest Dwellers (Recognition of Forest Rights) Act.

Bunkar, who is based out of Polmi village, added that the farming practices of Baigas are not to farm on flat lands, but on small patches in the hills itself.

Asserting that the adivasis cannot live in cities, Katori Baigin from Bahpani village said: “We must get a community land title for our forests. Cities are for people who live there. It is in villages and forests where we live. We will die, but won’t shift from here”. 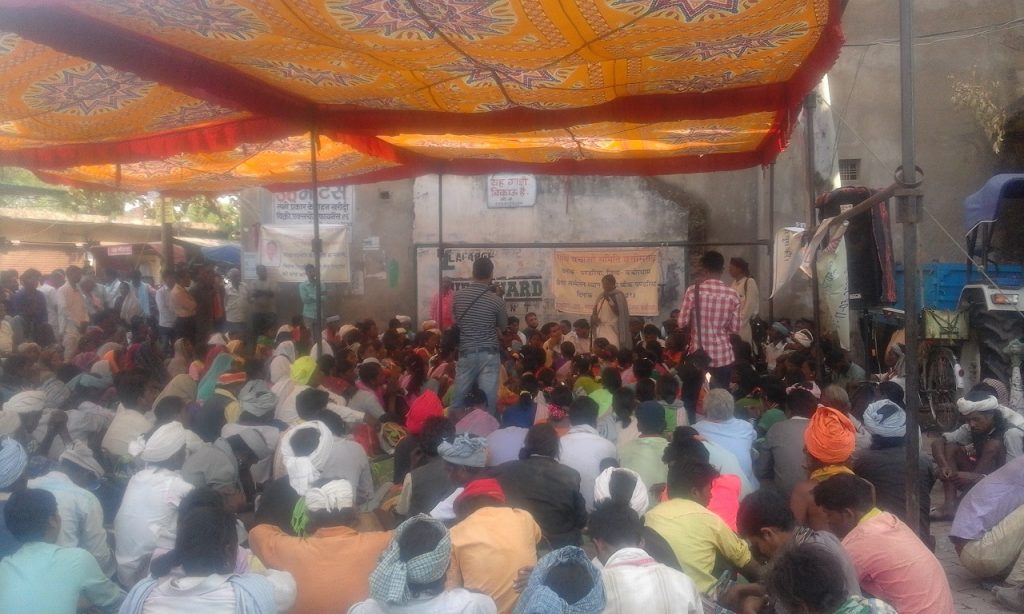 Katori Baigin speaking in front of the assembled Baiga adivasis.

“We have been cheated in even the individual forest land titles that have been granted to us. Many have faked a Baiga identity and have received titles. None of the Baigas have received more than 0.5 acres in ownership,” said Itwari Machiya, a traditional head of the Baigas.

As the march proceeded for a meeting with the sub-divisional magistrate of Pandariya block, Bish Ram, a resident of Sajhedi forest village in Amaniya gram panchayat, hoped that their effort would not be in vain.

“The forest guards keep telling us to move out of the village as a tiger corridor would be developed. They tell us that those who have land titles will be compensated,” Ram said.

But, many of the 35-household village in Sajhedi do not have titles, he added.

The assembly on March 19 was also attended by activists working with adivasis in other parts of Chhattisgarh.

“The government has classified Baigas as a vulnerable tribe. But, it is unfortunate they have to come so far, on foot, to make their voices heard,” said Vijendra bhai from Raipur-based Chhattisgarh Van Adhikar Manch, a network of groups fighting for forest rights.

Sunil Kumar, sub-divisional magistrate, Pandariya, in an address to the adivasis, said that there was no proposal at present to develop a corridor in the region.

“About forest rights, we will initiate an inquiry on the titles that have been granted and also begin the processes for handing over community forest rights” Kumar said.

Poorvi Kulkarni is a Mumbai based journalist