Backstory: Watch Out for That SLAPP 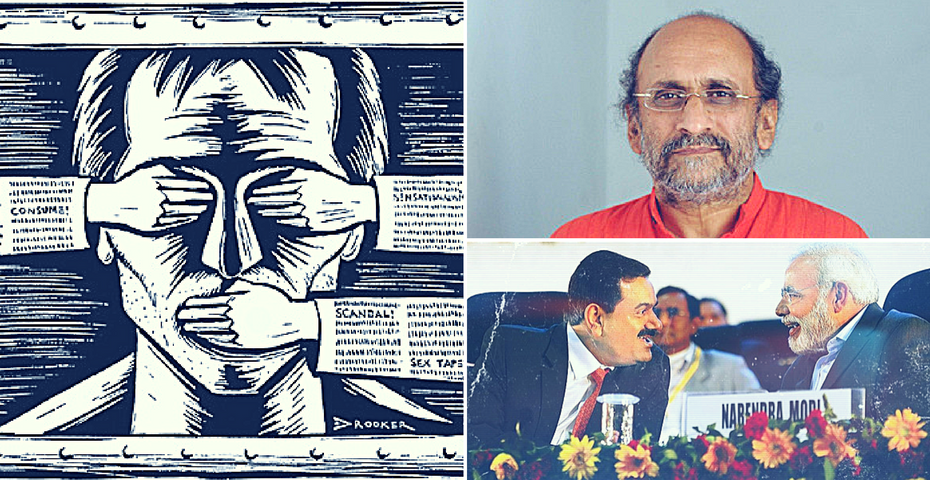 In 1996, two US law professors, George W. Pring and Penelope Canan, began their new book SLAPPS, Getting Sued For Speaking Out with the following sentence: “A new breed of lawsuits is stalking America. Like some strain of virus, these court cases carry dire consequences for individuals, communities, and the body politic.”

They termed this strain of virus as SLAPP, or ‘strategic lawsuit against public participation’.

As acronyms go, this is a particularly facile one, recalling in an instant the smacking sonance of a strong flat surface on yielding flesh resulting in the recipient of the attention being sent reeling across the floor. This, in fact, is precisely what those who file SLAPP suits seek to do: use disproportionate monetary power and influence to bring down the object of their wrath, or at least threaten them into submission. The Wire in one of its recent pieces (‘Adani Group ‘SLAPP’ Pushes EPW Editor Out of His Job’, July 18) cites a definition put out by the Los Angeles Times that kind of wraps it up: “A deep-pocketed corporation, developer or government official files a lawsuit whose real purpose is to silence a critic, punish a whistleblower or win a commercial dispute.”

Today it seems the virus that Pring and Canan first drew our attention to is stalking media institutions in India. The recent SLAPP case being brought against the respected Economic and Political Weekly (EPW) by Adani Power Ltd is one of a long list of similarly minatory legal assaults against Indian media platforms putting out information of important public interest.

Take the 2004 series on the harmful physical impacts of pesticides that figured in the columns of the Hindi newspaper Rajasthan Patrika. It led to an umbrella body of 84 pesticide manufacturers, calling itself Crop Care Federation of India, claiming Rs 50 lakh for damages done to the reputation of its shareholders. It took another five years for the Delhi high court to tell the Crop Care Federation of India to take a hike, with the presiding judge, Justice S. Ravindra Bhat, recognising the case as a SLAPP suit, “intended to censor, intimidate and silence critics by burdening them with the cost of a legal defense until they abandon their criticism or opposition. Winning the lawsuit is not necessarily the intent of the person filing the SLAPP. In such instances the plaintiff’s goals are accomplished if the defendant succumbs to fear, intimidation, mounting legal costs or simple exhaustion and abandons the criticism. A SLAPP may also intimidate others from participating in the debate.”

The lesson here is that standing up to the SLAPPing bully, as the Rajasthan Patrika did, can be a rewarding exercise. Unfortunately it is not often done. The perceived power wielded by “deep-pocketed corporations” – in the EPW case it is one that has links with the highest echelons of government – often results in prompt capitulation at the mere issuance of a missive on an attorney’s letterhead. A scrutiny of the recent letter issued by the Ahmedabad-based law firm Thaker & Company on behalf of Adani Power Ltd is interesting. It focused largely on the piece published in the journal in its June 17, 2017 issue, ‘Modi Government’s Rs 500-Crore Bonanza to Adani Group Company,’ and referred to another published in January 2017, ‘Did the Adani Group Evade Rs 1000 Crore in Taxes?’ (both pieces can be accessed on The Wire). It threatened penal consequences and damages for an unnamed amount, and its main intent was to accuse EPW of defaming the reputation of its client, rather than to offer a point-by-point refutation of the substance of the pieces cited. The term “defamation” or “defamatory” was used no less than 31 times in the course of this notice, drawing sustenance no doubt from last year’s Supreme Court judgment that upheld the constitutionality of criminal defamation and about which a well known commentator had rued, “The court has again bent the arc of jurisprudence towards fear and paternalism, rather than liberty and rights”. Most democracies the world over have banished the concept of ‘defamation’ from its statute books, even as India continues to be weighed down by it.

Given the importance that the term ‘defamation’ invariably assumes in such contexts, it may be worth pointing out that this is not just about whether something is defamatory per se or perceived to be so, but whether what is said has the substance of truth in it; whether it serves the public good and whether it has gone through processes of due diligence and careful documentation. On all counts, the pieces that have drawn the attention of Messrs Thaker appear to pass muster.

Given this, it may be apt to recall what Justice G.S. Patel of the Bombay high court had observed in the 2015 SLAPP suit filed for Rs 100 crore against Moneylife, a news portal run by renowned whistleblower journalist Sucheta Dalal and Debashis Basu:

There are also innumerable instances of how the SLAPPing hand has ended up badly singed. You cannot get a more powerful adversary than McDonalds on your tale, but Greenpeace’s Helen Steel and Dave Morris – sued for a critical pamphlet they wrote in the 1990s – took on the behemoth in a case that came to be known as the ‘McLibel trial‘. It was McDonald’s that finally ended up with a lot of egg burger on its face, when the European Court of Human Rights ruled that the case had breached not the rights of the burger company against defamation, but the rights to freedom of expression and a fair trial of Steel and Morris.

The reason why the Adani SLAPP suit assumes importance at the present juncture is that it constitutes one more brick in the wall against media freedom that is emerging before our eyes. Already, the censor’s hand has assumed the shape of a fist (‘Latest CBFC Gyan: Amartya Sen Can’t Say ‘Gujarat’ or ‘Cow’, July 13). Journalists have been assaulted by political vigilantes, organised lumpens have broken into television studios with impunity and online trolling of content put out by media persons has assumed the dimensions of a cottage industry. The chilling effect of these developments on journalism, already skewed in a corporatised media scenario, is patent. Investigative reporting has all but disappeared, or has been reduced to the recycling of documents supplied by vested interests, even as evidence of wrongdoing, as in the Panama Papers, keeps emerging.

At The Wire, there is an intimate understanding of the importance of this issue, since this news portal has itself been the subject of egregious lawsuits strategically aimed at silencing it or disrupting its operations. It is now playing the role of an intermediary platform carrying the pieces on the Adani matter, which have now been pulled down from the EPW website, perceiving it as content of extreme public interest.

Naming names is always a fraught exercise and it is common knowledge that outing the identities of victim-survivors of rape and other sexual offences is illegal in India. There is also need to be exceedingly careful in cases involving juveniles. The naming of the 17-year-old boy whose offensive Facebook post on Prophet Muhammad recently triggered riots in West Bengal in a piece that appeared in The Wire, ‘Bengal is Paying the Price for Identity-Based Politics, First by Trinamool and Now BJP’ (July 8), rightly drew the ire of some readers. One of them, Gautam, wrote: “No matter how angry and emotional the staff at The Wire is over these riots, it is bottom tier journalism to name the 17-year old student and paint him as a ‘Hindutva activist’. This is the same kind of behavior and harassment that Gurmehar Kaur faced for her views. I expected better from a liberal media outlet. Please stop this victim blaming and remove the student’s name from this article and stop judging him as ‘Hindutva activist’ for his post.”

While the general swipe about The Wire’s editorial line is somewhat gratuitous, there can be no disagreement on the point about the boy’s name, especially since he did in fact go through some exceedingly rough moments. This is to also note that the web administrator of The Wire responded promptly to the observation and removed the name.