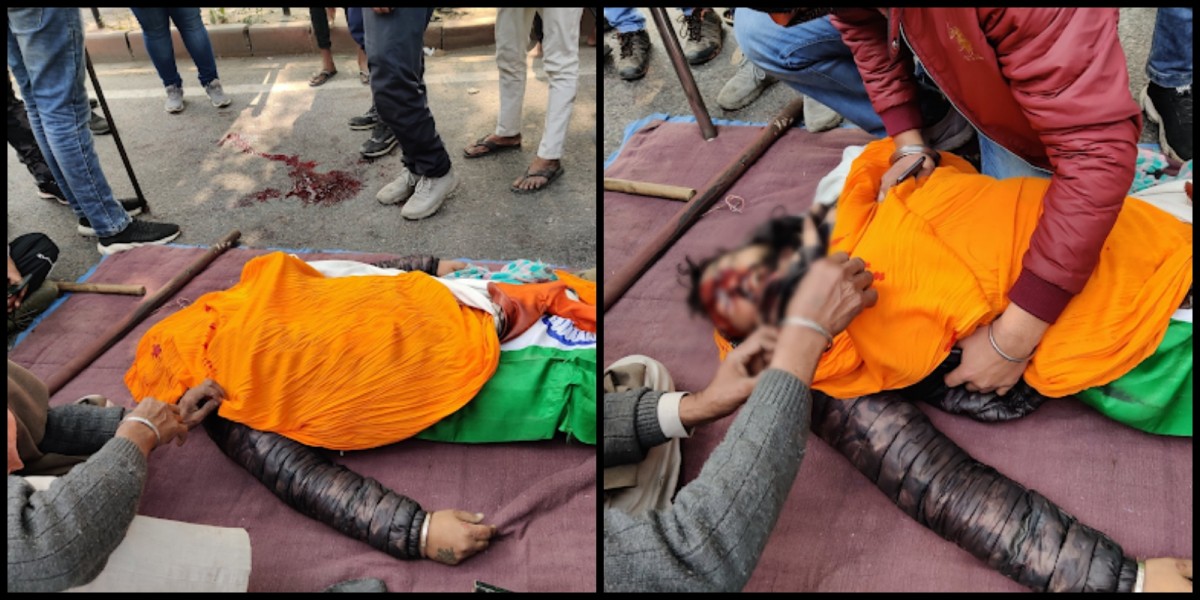 Farmers tend to the body of Navreet Singh, 24, killed during the Tractor Parade on January 26. Photo: ismat Ara/The Wire

Note: This story ends with a video of the wounds on Navreet Singh’s face which some readers may find disturbing.

New Delhi: The family of Navreet Singh – the young man killed during the tractor parade in the capital on January 26 – has refused to accept the Delhi police’s claim that he died because his tractor overturned, and insists he was shot – as farmers who say they were witness to the incident near ITO had originally claimed.

The cause of Navreet Singh’s death is at the centre of three sedition cases that the police in Uttar Pradesh, Madhya Pradesh and Haryana have filed against journalists including India Today’s Rajdeep Sardesai, and the Congress politician Shashi Tharoor for blaming his death on a gunshot.

‘We were cheated, now courts will decide’

“We were told by the doctor that they have clearly seen the bullet injury, and then we cremated his body peacefully. But we were cheated, as the [post mortem] report that came out did not say that. The doctor even told me that even though he had seen the bullet injury, he can do nothing as his hands are tied,” Hardeep Singh Dibdiba, Navreet’s grandfather alleged, while speaking to The Wire on Friday, three days after his death.

Dibdiba, 68, has been part of the farmers’ protest since the beginning, he says, adding that he has authored five books on Sikhism. However, after his grandson’s death, he is back in Dibdiba village of Rampur in Uttar Pradesh.

Noting the mention that the post-mortem report makes of two “lacerated” wounds, one on Navreet’s chin and the other behind his ear, he said, “They [doctors] haven’t directly mentioned the word bullet in the post-mortem, but given the circumstances and the kind of government that is governing the state, they wrote as much as they could about it. Now the courts themselves will clear the matter once we have a lawyer,” he said.

Navreet’s father, Vikramreet Singh, 46, said, “Everybody who saw his dead body saw that it was a bullet injury. One of the doctors who did the post-mortem said that it is a bullet injury, but that he can’t write it.” He added that his son had recently returned from Australia and went to Delhi to participate in the tractor parade by farmers. “We will finish his last rites by February, 4 and then go ahead with our plan of action,” he said.

UP police deny interference or pressure

Denying the family’s bullet injury claim, the seniormost police officer of the area, ADG Bareilly Avinash Chandra, said, “We had made a panel of senior doctors for the autopsy. We have no reason to suppress or distort such a document because the matter is of Delhi Police.”

One organisation the family could approach, say lawyers, is the National Human Rights Commission, which could examine the video made during the autopsy and cross examine the doctor who wrote up the report.

What happened that day?

When this reporter saw Navreet Singh’s body lying on the road at ITO on January 26, several farmers identified themselves as eyewitnesses to the incident and claimed that the young man had died as a result of being hit by a bullet.

Though no police personnel were visible within at least 300 meters from the dead body, the farmers told reporters that the police had “dispersed from the scene.”

Even after the Delhi Police released footage which showed Navreet’s tractor turning turtle, the farmers at the scene stuck to their claims. “A bullet hit him and that is why he lost control of the tractor and met with an accident,” said one man who said he was a witness.

The post mortem report makes no mention of any bullet injury but does note the presence of an inverted injury on the left side of Navreet’s lower chin, and an everted injury above his right ear. The report, which The Wire has accessed, lists six injuries including those over the eyebrow, chin, skull, ear ossicles, chest and thigh.

Manoj Shukla, deputy CMO and doctor at the district hospital in Rampur where the post-mortem report was prepared, denied the family’s claims. He added, “We do the post mortem immediately and hand over the copy to the concerned SSP and SHO. When asked if it was a bullet injury, he did not deny it and said, “The doctors who have written it will be able to tell…”

The family claims that the injury on his right ear is the exit wound from the bullet. However, the ADG said that it is possible that something else might have hit his right ear. “Or you may have got the wrong document,” he added.

According to a senior doctor at the All India Institute of Medical Sciences, speaking to The Wire on condition of anonymity, laceration wounds can be associated with bullet injuries. A laceration is a wound that occurs when skin, tissue, and/or muscle is torn or cut open. Lacerations may be deep or shallow, long or short, and wide or narrow. Most lacerations are the result of the skin hitting an object, or an object hitting the skin with force.

He said, “It seems that the post mortem report has carefully been made to remove any doubts about a bullet injury.” He added that the nature of the injury on his lower chin and ear could be possible entry and exit points of a bullet injury, especially given that the two injuries form a straight line. He added, “If a bullet had passed this man’s head, the mandible bone would have been fractured but the report doesn’t mention it. In fact, the autopsy report does not mention any X-rays done.”

Navreet Singh’s father says that the doctors had assured them that a bullet injury was visible in the X-rays but refused to show it to them. Dr Shukla also confirmed that X-rays were taken during the autopsy. However, the post-mortem doesn’t refer to any of them.

The family also shared a video of Navreet’s face, pointing to the deep holes visible in his left chin and above his right ear, making the point that this was a bullet injury. While it is impossible for journalists or lay persons to reach any firm conclusion, the family is hoping an independent probe will establish the truth.

Reacting to Dibdiba’s allegations, the Rampur police tweeted a statement on Saturday evening signed by the three doctors involved in Navreet Singh’s post-mortem denying that they had spoken “to the media or any other person” or provided any such information as is being attributed to them in the media.

With inputs from Vijayalakshmi Nadar

Note: The story has been updated to include a reference to the statement of the three Rampur doctors circulated by the Rampur Police. One quote of the ADG, misattributed to a doctor, has also been now properly attributed and more details and quotes added.