Even though he uploaded the drawing on August 15, police called Pranjal Payeng, a day before the Bharat Bandh by various farmers’ organisations. New Delhi: The cyber cell of the Assam Police has taken offence to a painting by a local artist, depicting a man lying on cracked land, blood oozing out of his stomach, on which the National Flag is stuck.

The artist, Pranjal Payeng, teaches painting in the Telgorom area of the state’s Golaghat district, and was asked to appear before the superintendent of police to explain why he had uploaded the painting on his Facebook account. Payeng was made to delete it on the grounds that it disrespected the National Flag.

Payeng told The Wire that he received a call from the SP’s office on September 24 and was asked to come to the police station that day itself. “I stated my inability to do so and therefore appeared on September 25.” 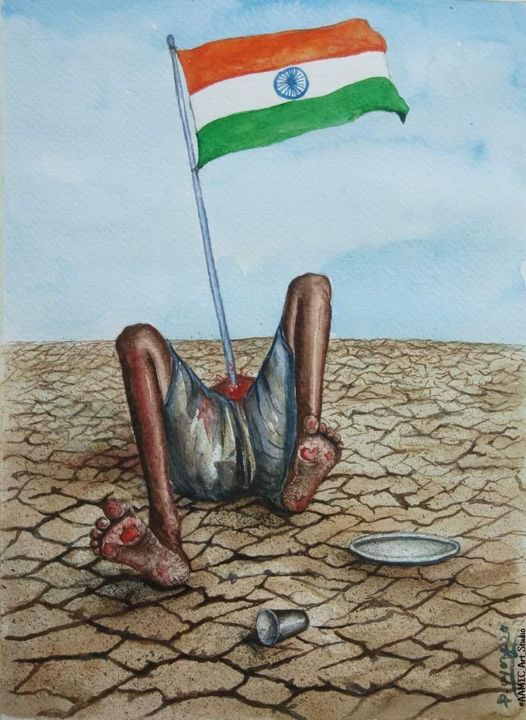 The painting by Pranjal Payeng which Assam Police objected to. Photo: Facebook/Rashmirekha Borah

Payeng said he was also asked to write a note at the police station (after deleting the photo of the painting from his Facebook account) stating that he had deleted it because it was “objectionable” and that everyone must be careful before posting anything on social media.

“Only after I uploaded this message did people get to know that the cyber cell of Assam Police had asked me to take down that photo. What is surprising to me, though, is that the photo was uploaded by me on August 15 and police had taken note of it only after a month had gone by,” he related.

Interestingly, the call had gone to him a day before various farmers’ organisations and opposition parties called for a Bharat Bandh against the controversial agriculture bills passed by the BJP government in the recent parliament session.

That farmer’s are directly affected by droughts is well known and cracked soil has long been used as a metaphor for cultivators’ hardships.

After the police action, several people, most in and around Assam, shared that photo on their Facebook accounts as a mark of defiance and in protest against the state disallowing an artist the freedom to express his ideas.

Payeng said, “I have already told the police that what I drew is now in the public domain and I have no control over it.”

Payeng also defended what he drew and vehemently denied that his drawing disrespected the National Flag.

As per the Prevention of Insults to National Honour Act, 1971, some of the explanations to showing disrespect to the flag are “dipping the Indian National Flag in salute to any person or thing”; allowing it to “touch the ground or the floor or trail in water intentionally”; “intentionally displaying the Indian National Flag with the ‘saffron’ down”, showing  it “as a portion of costume, uniform or an accessory of any description which is worn below the waist of any person or by embroidering or printing it on cushions, handkerchiefs, napkins, undergarments or any dress material, or putting any kind of inscription upon the Indian National Flag”, using it “as a receptacle for receiving, delivering or carrying anything except flower petals before the Indian National Flag is unfurled as part of celebrations on special occasions including the Republic Day or the Independence Day”; using it “as a covering for a building, statue or a monument, a speaker’s desk or platform, a boat, train, aircraft”.

The young painter said, “I drew it for Independence Day to highlight that we all come together under the flag with pride on that day and on other days too, but independence has not been able to do much good for the common people yet…It respects the flag by depicting a dying man still holding the flag high. I also know that it can be interpreted in different ways; but the police did not even recognise the meaning and barred me from speaking in my voice.” An ornamental elephant is seen sitting on its knees, blood flowing from it.

“This is to highlight that we are quick to worship an elephant when it is an idol but are we doing enough to protect the animal in its real form? I come from the region of the Kaziranga National Park, which has an elephant corridor. I have seen a lot of man-animal conflict because of certain things that are not elephant friendly,” he said.

He added, “Local artists like me draw what we see around us. Even the painting that the state police took objection too is inspired by what I saw around me. I belong to that strata of society where common people, many of whom are farmers in an agriculture-based state like Assam, live in poor conditions in spite of working very hard. They all come together under the National Flag but their conditions also have to be highlighted.”