Data shows that while the border districts registered less exclusion in the final draft NRC – published on July 31, 2018 – several districts which are Hindu majority and have a substantial Bengali Hindu population, have less inclusion. 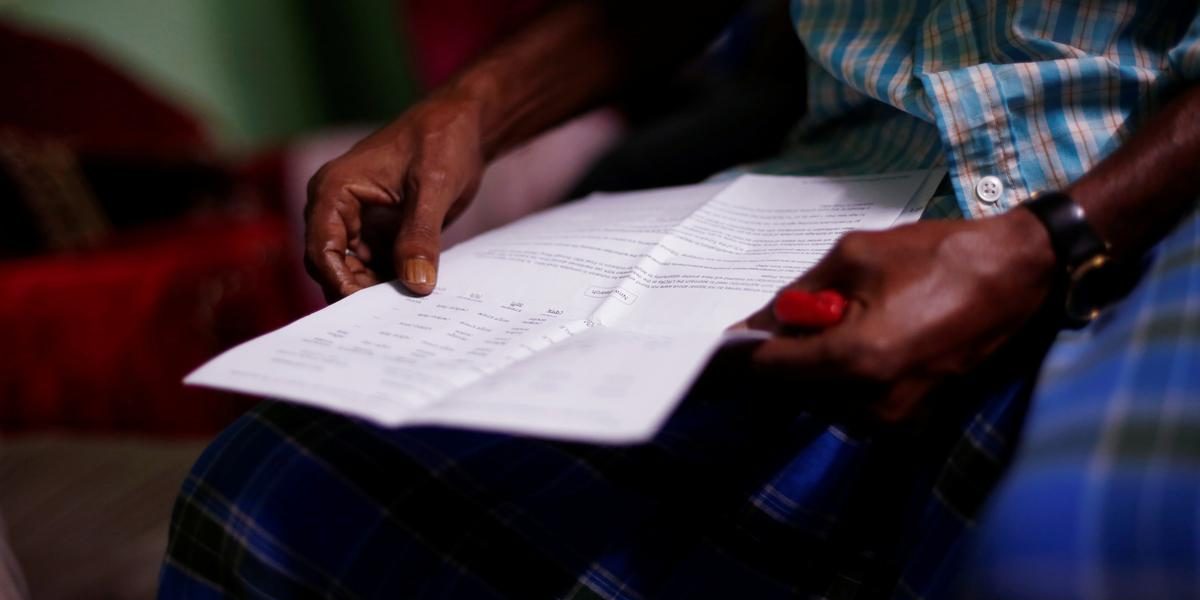 Ayub Salm holds the draft list of the NRC of his family in Dhubri district in Assam, August 2, 2018. Photo: Reuters/Adnan Abidi

New Delhi: The Supreme Court, in monitoring the update process of the National Register of Citizens (NRC) in Assam, recently refused to entertain the Central and state government’s plea to conduct 20% sample re-verification of the names in districts bordering Bangladesh and a 10% sample re-verification in the remaining 29 districts. The BJP-led state government has, however, presented district-wise data in the assembly to build another case for it.

State parliamentary affairs minister Chandra Mohan Patowary presented the data on the floor of the House on August 1. So far, this data had only been disclosed to the apex court by the state coordinator for NRC, Prateek Hajela, in a sealed envelope last year.

Patowary was responding to a query by BJP MLAs Shiladitya Deb and Debananda Hazarika and the All India United Democratic Front (AIUDF) legislator Nurul Amin, to the government regarding a July 25 Assam Tribune report on the dearth of a policy for those who will be left out of the final NRC, which is slated for publication on August 31.

In the annexure attached to the minister’s reply, what has come to light is that while the border districts registered less exclusion in the final draft NRC – published on July 31, 2018 – several of the districts which are Hindu majority and have a substantial Bengali Hindu population, have less inclusion. This also confirms The Wire’s report five days after the final draft was published in 2018 which categorically stated so – by making use of unofficial data culled by reporters of the Assamese news channel Pratidin Time.

As per the official data, Hojai, the assembly constituency which the BJP’s Shiladiya Deb won in 2016, has 32.99% exclusion. According to the 2011 Census, Hojai is a Hindu-majority district.

For instance, Darrang, declared Muslim majority in the last Census, has 30.9% applicants out of the final draft. Yet another Muslim-majority district, Morigaon, is in the fourth position with 15.04% exclusion. While Nagaon has 14.2% exclusion, Barpeta registered 13.4% exclusion of names.

However, this data, at best, is only an indicator of religion-wise exclusion, and in no way confirms that those excluded in a Hindu-majority or a Muslim-majority district are Hindus or Muslims respectively.

However, the minister, using the data, argued in the assembly during the Zero Hour that the process of updating the NRC is “flawed”, going to the extent of pointing fingers at the court-appointed state coordinator Hajela for it. It tried to build a case for the re-verification demand on the ground that the districts bordering Bangladesh have less exclusion percentage, hinting that “illegal immigrants” who might have taken shelter within the local community most likely have entered their names in the final draft while “genuine Indians” are being left out of it.

Arguing against the ‘flawed’ process, and Hajela’s contention before the court that already 25% re-verification had been done in the process of disposing “about 36 lakhs claims and two lakh objections (to the claims)”, the minister in his written statement in Assamese stated:

“He (Hajela) states that such re-verification happened to the extent of 29 per cent in Cachar, 38 per cent in Dhubri, 25 per cent in Karimganj and 41 per cent in South Salmara. The persons re-verified, have claimed linkage to the same person from whom the claimant has also claimed linkage. Thus, adding the number of claimants and the person, who, learned SCNR (State Coordinator of National Registration, meaning Prateek Hajela) claims to have re-verified, gives an idea of number of persons who have claimed linkage on average from same legacy person in the district. The number of persons excluded gives an idea of number of legacy persons used by the group of claimant as well as other persons claimed to have been re-verified by SCNR.”

The minister gave an instance of South Salmara to strengthen his argument:

The minister’s reply also had an annexure detailing the number of persons claiming linkage from one person’s legacy in various districts.

The statement also pointed out that the SC, in its order on August 28, 2018, had stated that the court might consider sample re-verification of the names in the final draft by the NRC personnel from a neighbouring district. However, on July 23, the court – while extending the deadline of the final NRC publication by a month – refused to go ahead with it.

The government, in its re-verification plea, had sought that the process be done by “Class I officers of the rank of Circle Registrar of Citizenship Registration (CPCR) or above well-versed with the NRC updation process.”