Most people receiving the re-verification notices are being asked to appear for hearings hundreds of kilometres away within one or two days.

People wait to be transported for an NRC hearing in upstate Assam. Photo: By special arrangement

Guwahati: Inside the surgical ward of the state-run Gauhati Medical College Hospital (GMCH), Kabeluddin Rahman was sitting with his four-year-old daughter Kulsum on his lap. Visible on Kulsum’s small face were patches of bitumen, a material used for repairing roads.

Close by, Rahman’s wife Nilima Khatun was semiconscious. Patches of bitumen were stuck to her legs, arms, torso and face.

Nilima and Kulsum were among 24 passengers on a bus that met with an accident in Khanapara, on the outskirts of Guwahati, the night of August 4. The bus was transporting as many as 50 people from Sontali village in Kamrup (Rural) district, when it was hit by a dumper transporting molten bitumen for road repair.

The hot bitumen spilled as a result of the collision, leaving the passengers exposed to it. Of the 24 who were hurt in the process, 10 were admitted to GMHC in a critical condition. 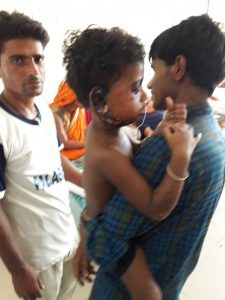 An injured Kulsum with her father and uncle. Photo: Gaurav Das

The passengers had hired the bus to respond to a “sudden notice” from the authorities compiling the National Register of Citizens (NRC), asking them to appear for re-verification of their documents on the very next morning at Golaghat in upper Assam — situated at a distance of about 300 kms.

Kulsum was sitting next to her mother when the dumper fell on the bus. Her father, Rahman, is understandably angry.

“Why did Prateek Hajela [the NRC state coordinator] do this to us? Why must we travel to upper Assam? Will he come to our aid now? Whatever money we had was used up to pay for the journey. My wife took it because she did not know how long she and the others would have to stay in Golaghat. The due date for the hearing was on Monday (August 5). She has now missed it because of the accident. Will Hajela take pity and allot us another time for a hearing?” he asked.

Eyewitnesses  said that so desperate were the passengers to attend the re-verification hearings that some of them, in the immediate aftermath of having been grievously injured, scrambled to get their bags in order to keep their documents safe.

Ajibur Rahman, Nilima’s brother-in-law, was one such eyewitness. “I arrived at GMCH early on Monday morning from Sontali. Though severely burned, many victims kept referring to their papers. For them, the papers came first, even before their treatment. We are a family of limited means. We do petty work to sustain ourselves. I am semi-literate but even I know that there was no such direction from the Supreme Court for a renewed process of re-verification of names,” he told The Wire.

Earlier in August, the Supreme Court which is monitoring the process of updating the NRC, refused to entertain the Centre and Assam government’s plea to re-verify 20% of the samples from the four districts bordering Bangladesh and 10% of the sample of the rest of the 29 districts.

In response, the Assam government presented in the assembly the districtwise data of the final draft NRC published in July 2018 to make a case for its re-verification bid. The apex court had refused the government’s plea after Hajela stated to the two-member bench that 25% of the names in the final draft had already been re-verified in the sample process. 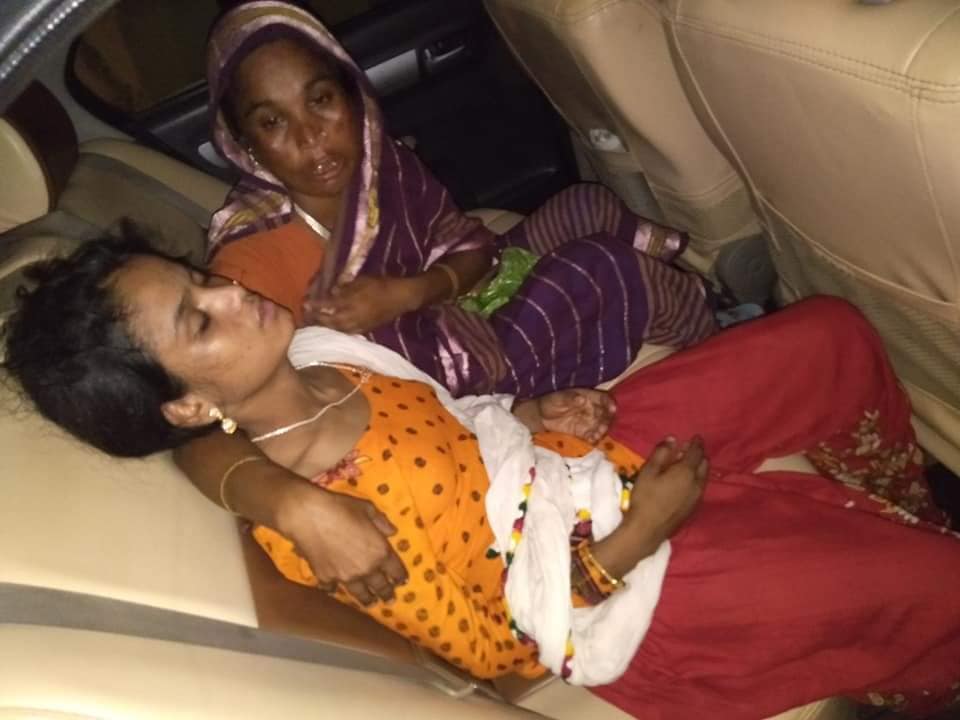 Forced to travel in the heat and then wait, many people fainted ahead of the rushed hearings. Photo: By special arrangement

The recent spate of re-verification notices have been followed by confusion, with those receiving the notices unsure as to whether this was in accordance with what the Supreme Court had ordered. Additionally, according to the standard procedure, a minimum of 15 days are to be given to those who have been asked to appear for a hearing. This window, many said, had not been given in this case. Many said that they had received notices on August 3, asking to be present in distant re-verification centres within a day or two.

Goroimari and Sontali are reportedly among the few Bengal-origin Assamese Muslim pockets in lower Assam where a sizeable chunk of residents have received notices to appear for re-verification hearings in upper Assam districts.

Also read: You May Think You Are an Indian Citizen, but Can You Convince the State?

A panicked rush followed, with many struggling to hire buses, pick-up trucks, mini-vans, taxis or any other vehicle that could get them to the re-verification centres, which ranged between 300 km and 500 km. Hiring rates for these vehicles ranged anything between Rs 3,000 and 6,000 for small cars and to Rs 40,000 for a private bus. The latter were mostly hired by families who had received notices for several members.

Some of the reasons stated in re-verification notices were that their legacy documents were not found admissible, their legacy person was not their parent or grandparent, their family tree was rejected upon verification and the link between a person and his or her claimed legacy was not found acceptable.

Some of people who have been served with new re-verification notices told this reporter that they had already attended a few verification hearings.

“We have our names in the final draft NRC published in 2018. Members of my family have still received these new notices, most recently to attend hearings in Kaliabor, Titabor and Sivasagar in upper Assam. We have already attended three to four prior NRC hearings. On Sunday, we hired a private vehicle for Rs 6,000. I had to leave my pregnant wife to accompany my relatives,” said Shajahan who runs a small business in Barpeta. Drinking water facilities at one of the NRC re-verification hearing centres. Photo: By special arrangement

Rehana Sultana, a poetess and a researcher from Sontali village said the spate of notices were not limited to her immediate family either. “Hiring a private bus costs around Rs 40,000. For a few of my cousins who are based in Kanpur and Bengaluru and who were also asked to attend hearings all of a sudden, the cost of travelling would be even more. My family received multiple notices as well,” she said.

At midnight on Monday, an omni-bus with 22 people in it, returning from Golaghat to Goroimari in lower Assam, met with an accident at Sonapur in the outskirts of Guwahati. Nine people sustained serious injuries.

“My mother received injuries on her head and chest. After collecting money from our relatives, we had gone to Golaghat for the hearing on Sunday. Our NRC hearing went well. But we didn’t expect the accident,” said 28-year-old Yusuf Khan. His 54-year-old mother Sonabanu Nessa is being treated at GMCH.

Injuries are not all. Sixty-eight-year-old Rezia Khatun passed away at a hearing centre in Noltoli in Nagaon. Rezia, of Jaokata village in Kamrup (Rural) was suffering from high blood pressure.

Also read: SC to Consider Plea to Drop Children from NRC If One Parent’s Citizenship Is Contested

Amidst the confusion, a number of good Samaritans across ethnic and religious lines have extended a helping hand across upper Assam areas. A helpline service offering nearly 30 contact numbers was made available to people through their local leaders and put out on social media platforms like WhatsApp and Facebook.

“These people needed food, water and accommodation upon arrival. Most of them had no clue where to go and how to reach the hearing centres. Our volunteers did their best in providing every possible help. A local club opened its doors to provide them with temporary accommodation. Some of them were in need of medical assistance due to the sweltering heat. Priority was to provide them with minimum basic facilities. Some of the hearing centres had no proper toilets or drinking water facilities,” said Bondita Acharya, a human rights activist from Jorhat.

The activist said many people, including pregnant women, were were even asked to buy packaged water. “The mobile toilets were in a pathetic state. We approached the deputy commissioner of Jorhat. He promised us several things but on the ground, not much was being done,” she added.

In the neighbouring Golaghat district, activist Soneswar Narah has been having similarly busy days. “The main concern is about their financial resources. Will they have enough money to return home? Many of them sold their cattle and valuable possessions, or borrowed money to make this trip. Is this justified? The state should at least make facilities available to these people, who are overwhelmingly poor. We are only trying to fill the void. They are human beings first and it is our duty to help them,” he said. 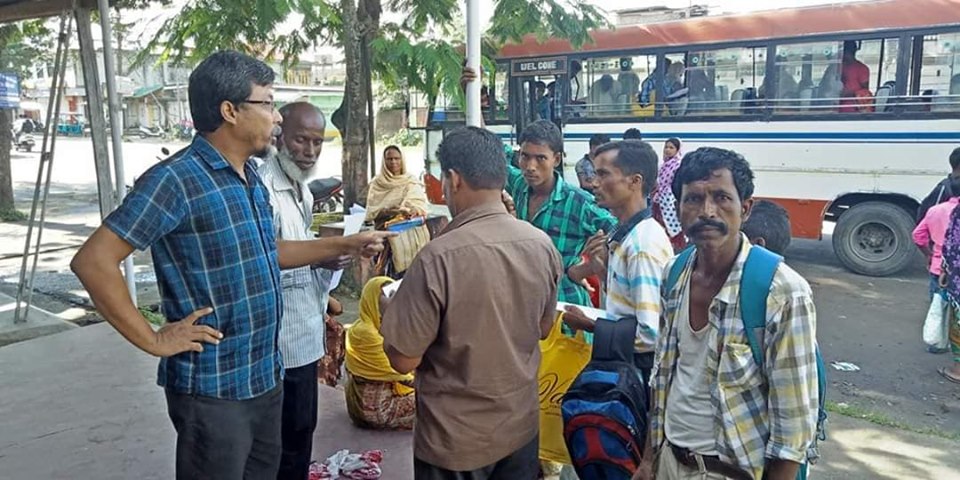 Social activist Har Kumar Goswami of the Forum for Social Harmony, a pan-Assam based rights collective, added, “We sought an appointment with Prateek Hajela as we wanted to submit a memorandum to him about the inconveniences caused by the new issuance of notices. But we were told we could meet him only after August 9. We have decided to upload the memorandum online so people can sign it.”

Farmers’ leader Akhil Gogoi took to Facebook on August 4 to address the issue as well and accused Hajela of doing issuing these notices “to save his skin.”

“There was no need for it. Most of these people have their names in the NRC and they have already gone through multiple verification processes. Some of them have even gone back to work outside the state. How can they afford to return in such short notice now? The issuance of the notices itself raises questions,” he said.

At the time of filing this report, yet another accident late on August 6, involving people travelling for an NRC hearing upstate was being reported by local media. This time a bus carrying 40 people from Boko in lower Assam met with an accident while returning from Jorhat after a hearing. Soimoon Nessa and and her daughter Arjuna Begum reported died in the accident.