For Hindutva ideologues, it is just a short step to go from declaring Muslims suspected of being Bangladeshi as 'foreigners' to looking at all Muslims as foreigners. 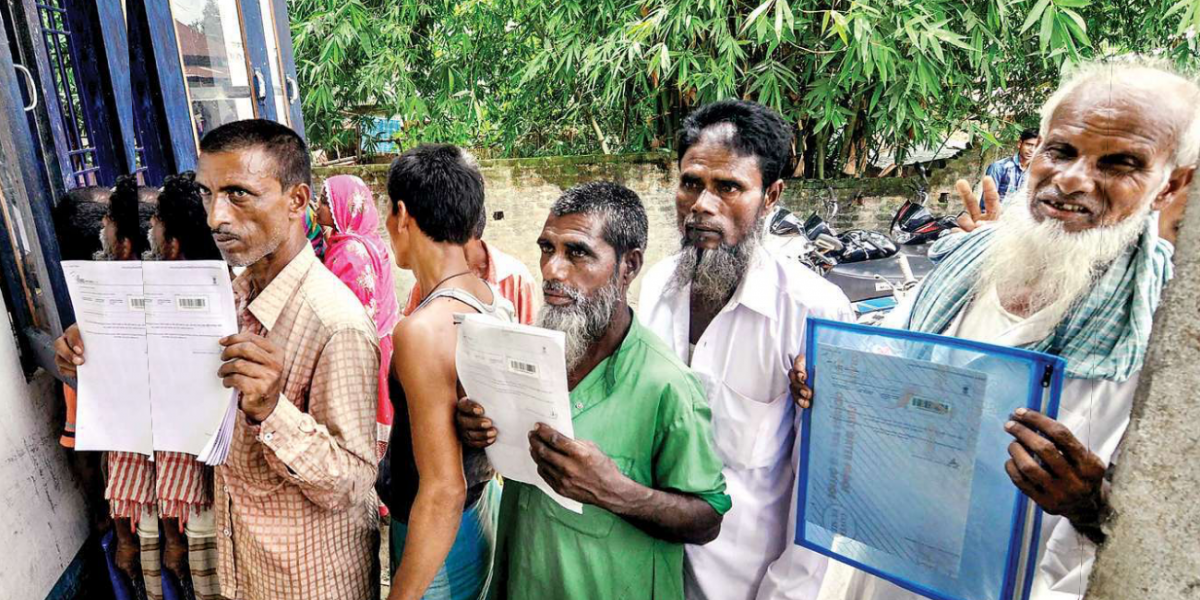 The National Register of Citizens (NRC) is worrying not just because of what lies in store for the 40 lakh, people in Assam who have been declared ‘foreigners’, many of whom are Muslim. Observers have commented on the absence of communal tension in the state but the accompanying clamour from the Sangh parivar in the rest of India raises questions about the larger anti-Muslim narrative being pushed.

For Hindutva ideologues, it is just a short step to go from declaring Muslims suspected of being Bangladeshi as ‘foreigners’ to looking at all Muslims as foreigners. On many occasions, BJP leader Subramanian Swamy has repeated that Muslims who do not acknowledge their Hindu ancestry (whatever that means) should be stripped of their voting rights. Swamy is only operationalising what the RSS’s second leader, M.S. Golwalkar, argued in his book We or our Nationhood Defined – that non-Hindus should live in India as second-class citizens.

It is a fact that there has been undocumented migration in Assam, but people are currently being targeted not on the basis of nationality but religion. Prime Minister Narendra Modi did not mince words when he said Hindu ‘migrants’ from Bangladesh should be accommodated. In the run up to the 2014 general election, he said, “As soon as we come to power at the Centre, detention camps housing Hindu migrants from Bangladesh will be done away with.”

He further reiterated, “We have responsibility towards Hindus who are harassed and suffer in other countries. Where will they go? India is the only place for them. Our government cannot continue to harass them. We will have to accommodate them here.”

Religion and nationality were seamlessly conjoined to mean one and the same thing.

The BJP, for long, has taken strong objection to the way electoral results have often been determined by how Muslims vote. They made a rather ‘bold’ move in Uttar Pradesh by not offering a single ticket to a Muslim to make the point that elections can be won without the support of Muslim voters.

Uttar Pradesh demonstrated for the BJP, riding on a a huge anti-incumbency wave of course, that Hindu votes across castes can be consolidated when pitched against the religious minorities. Thereby, the BJP can accrue larger electoral dividends.

As many studies have shown, there has been a steady decline in the number of Muslim representatives in parliament. From the denial of representation, and social invisibilisation, the die has been cast with NRC for disenfranchisement. The trumped up demand by Assam governor Jagdish Mukhi to introduce an NRC in every state is an early indication towards how Muslims in other states, who are neither Bangladeshis nor from any other Muslim country but are Muslims tout court, are foreigners. The argument that flows from the current demand to duplicate the NRC process in other states is that Muslims might be permitted to live and contribute to the ‘nation-building’ process by engaging in economic activities and provide ‘cheap’ and dispensable labour, but cannot demand equal rights since they are residents, migrants and refugees, and not citizens.

This provides a very simple narrative that can be easily understood, digested and agreed by portions of the Hindu community, unless one provides an equally convincing argument to counter it. Given the growing climate of religious polarisation in India, can there be one such narrative?

People check for their names on the final draft of the state’s National Register of Citizens after it was released, at a NRC Seva Kendra in Nagaon on July 30, 2018. Credit: PTI

The narrative against the NRC in Assam is at best weak and at worst confusing. The objections began with faulty cases of Indian citizens being identified as foreigners, including the nephew of a former president of India. Further, it became about the impending humanitarian crisis in rendering a large number of people stateless, and whether or not Bangladesh would accept them as its citizens.

Legal/procedural and moral/humanitarian arguments do not constitute a robust common sense to produce an effective counter-narrative. Faulty procedures can be set right so as to not leave out a single ‘Indian’, and humanitarian arguments can be countered – as they are being – by pitching that the ‘Indian poor’ need to be taken care of first, given the demographic change in Assam that has resulted in the marginalisation of Assamese language, culture and undue influence of  ‘foreigners’ on electoral results.

Mamata Banerjee’s aggressive posturing, attempting to draw a new binary between Bengali versus Assamese is tuned in to the imperatives of her own electoral calculations. She might benefit in Bengal in terms of weaning away Muslim votes from the Left, but it does not address the larger question of the future of Muslims and how to reconcile their status into a narrative that does not pose a danger or a challenge to their citizenship status in India.

The alternative narrative has to begin by looking at the possible links between the process of ‘othering’ of the Muslims and the well-being of Hindus. Does the politics of rendering Muslims stateless in anyway help Hindus gain more rights? Similarly, does indifference to a certain kind of humanitarian crisis – where those being displaced are not merely Muslims, Bangladeshis but also essentially the poor – empower the poor among Hindus or does it delegitimise their status and make them dispensable?

As many social theorists have pointed out, financial capitalism is dependent on expropriating ‘surplus populations’, and there is a definitive link to the rise of authoritarian nationalisms and the imperatives of global capitalist order. The point, however, is the colossal failure of generating a common sense narrative around these abstract global processes. It is very similar to the impending ecological crisis that has failed to gain a strong social narrative, given the invisible nature of its origins, flows and sometimes even its impact, though the impact is becoming ever graver and thereby difficult to ignore.

While the right wing is behind the growing anxiety among the marginalised, the challenge is to produce a narrative that can demonstrate the futility of such conflicts, though they might look palpable in the immediacy of the situation.

For instance, in another context of growing extra-institutional violence against Muslims, it can be demonstrated that this spate of violence does not stop with Muslims. While it begins with the Muslims, it soon also begins to target Hindus. Mahatma Gandhi, Govind Panasare and Gauri Lankesh were all Hindus. More recently, Swami Agnivesh, a Hindu sage, was not spared.

Further, this kind of an alternative narrative is possible only if the Muslim community mobilises itself not exclusively around issues affecting the Muslims or Islam but all those who suffer a similar plight like them. This, in turn, is possible only when Muslims stop self-representing themselves through the dominant tropes presented by the majority community. They have to find a new narrative for what it is to be a Muslim, beyond the images of ritualistic symbolism that the rightwing in India has reduced them to.