For Bengali Muslims Whose Names Are in the NRC, the Struggle Isn't Over Yet

Members of the All Assam Students’ Union have filed lakhs of indiscriminate objections on the inclusion of names that sound Bengali Muslim in the final NRC draft. 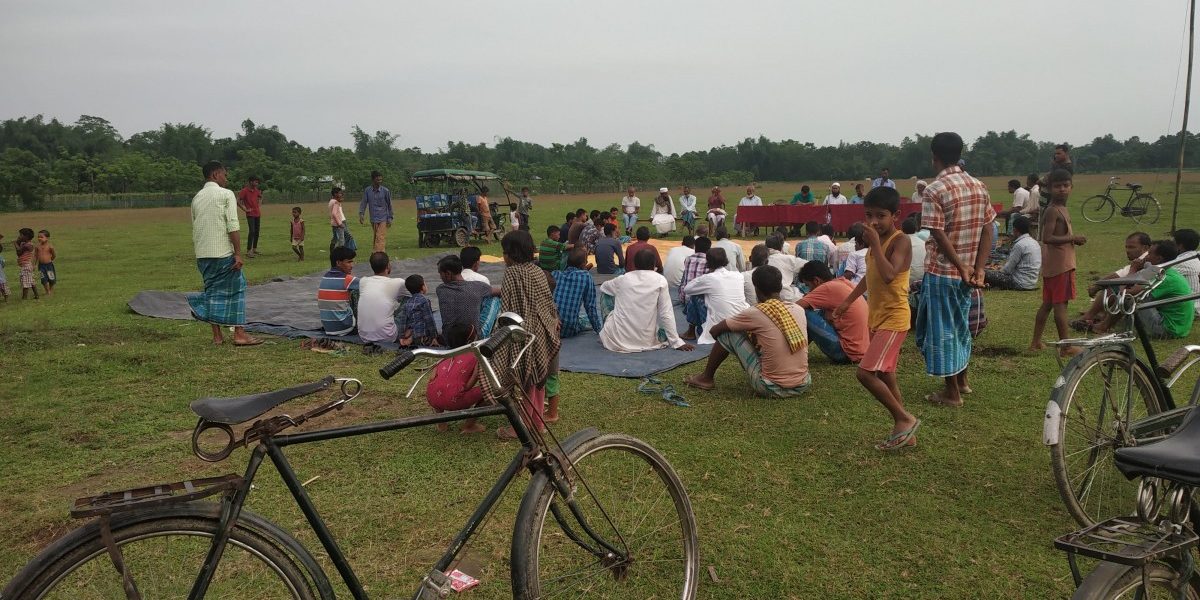 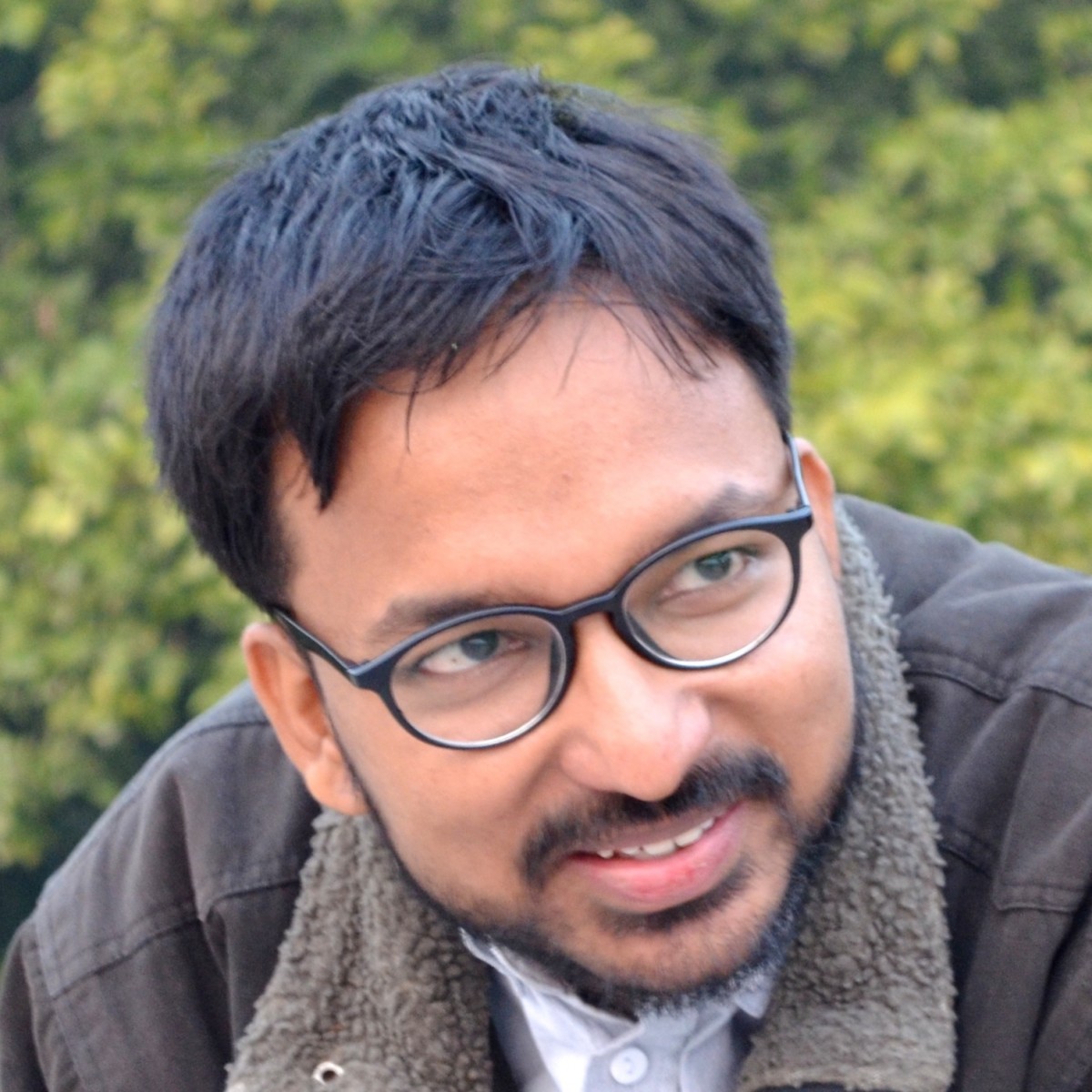 When, on November 15, 2018, I was explaining plagiarism and citation to a student, I received a hurried phone call from one of my friends in Assam. As soon as the one-on-one ended, I opened my social media newsfeeds and realised why my friend was in such a flap.

An upcoming event at my university titled ‘This Revolution Too Will Not Be Televised’ where, the poster claimed, the speaker would talk about “how the Bengal-origin Muslim community in Assam is fighting bigotry, xenophobia and social exclusion through poems and songs” was doing the rounds of the internet not in a way we had intended it to. People accused the event of ‘demonising’ the Assamese community and asked for it to be called off. A few opined that the speaker was selling his religious identity for some quick fame.

The clamour, led by powerful Assamese nationalists, businessmen, columnists and bureaucrats, quickly reached the higher-ups at the university who, thankfully, allowed the poet to read the poems he was carrying, all of which expressed a shatterproof desire to be called Assamese.

A month later, in December, the mighty All Assam Students’ Union, popularly known by the acronym AASU and led by Dr Samujjal Kumar Bhattacharya, was preparing lakhs of applications objecting to the inclusion of the Bengal-origin Muslims of Assam in the National Register of Citizens. 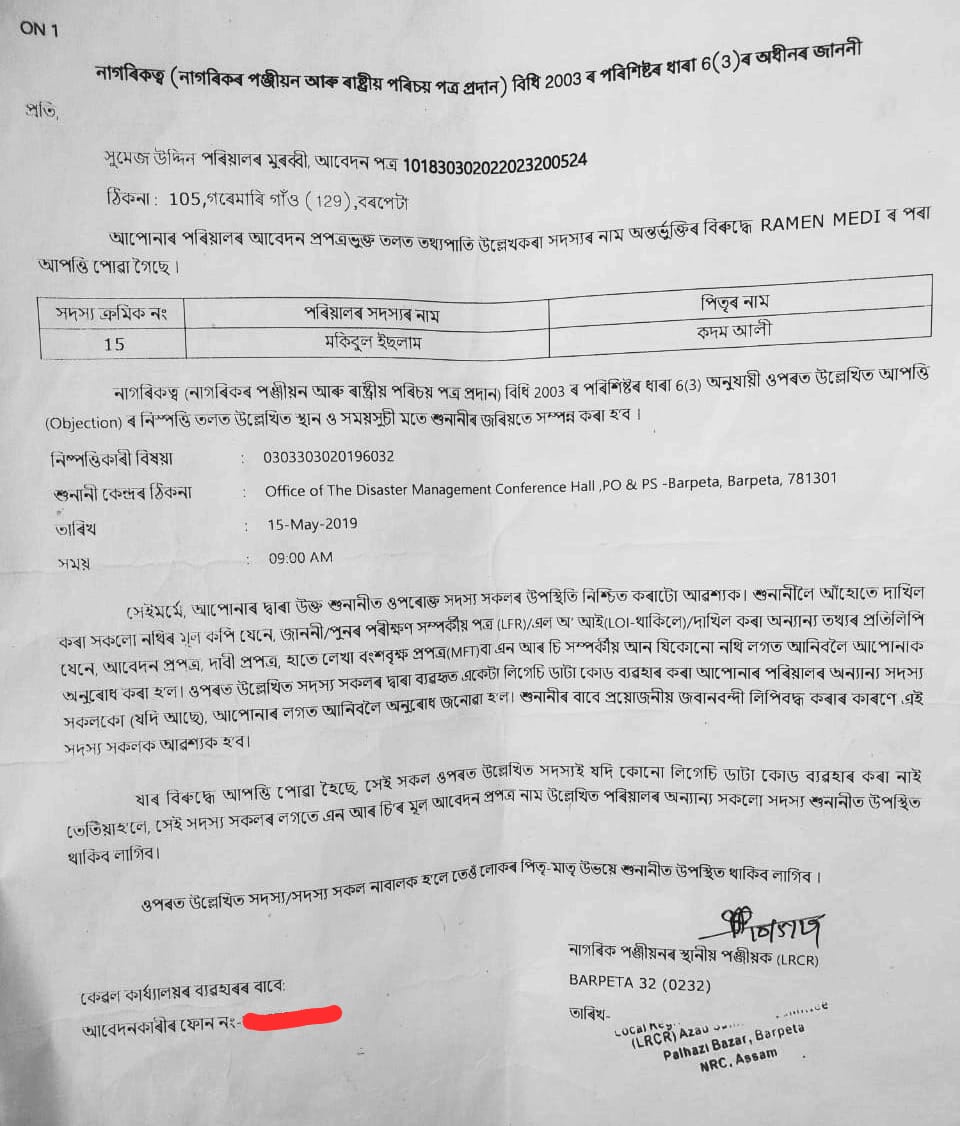 The NRC, first prepared in 1951, is being updated in the state with the aim of identifying undocumented immigrants. After a meticulous and rigorous process where the applicants submitted a series of documents, the complete draft NRC published on July 30, 2018 includes 2.89 crore people. But, for many among them, the ordeal that began at their birth as a Miya – the slang for a Bengal-origin Muslim in Assam – was far from over.

“We had received 55 objections till December 30, a day before the deadline. On the next day, at about 2 pm when I lazily went out for a cup of tea, my colleague from the objection and draft display office phoned me and asked me to rush back. I reached ADC (Additional Deputy Commissioner) sir’s room to see a group of boys – some of them familiar faces from the town – place what looked like thousands of objection forms in a mountainous pile. I said it was impossible to count so many objections and acknowledge their receipt since it was already 3 pm. We settled for a coarse-grained approximation until the office managed to count all the submissions the next day,” an NRC official recounted to me.

That indiscriminate objections have been raised against a particular community is a fact that, fortunately, no side has denied. When I contacted Bhattacharya for his opinion on the nearly 2.5 lakh objections, almost all of which were identical and submitted on the last day, he said there should have been more. “Is the process of claims and objections illegal?” he asked me.

It certainly is not. But the situation where most of the objectees are religious and linguistic minorities is alarming in a secular and democratic country. He said some khilonjias (indigenous inhabitants) have also received notices and he is sorry about that, and remedial measures have been taken. To the migrant-origin objectees who have all their papers in place and have travelled miles to attend a hearing where the objector is absent and the proceedings go on ex parte with the disposing officer (DO) often donning the hat of the objector, the student leader has a clear message – some of you are Bangladeshis. “The number of Bangladeshis cannot be so small, after all,” he tells me.

The many objections submitted on the last day have some things in common: the address of the objector is mostly incomplete; the ‘ground for objection’ reads the same – word for word – in thousands of such objections; no supporting document is attached (in the aforementioned case, the official told me that all the 55 objections submitted till that afternoon had supporting material attached, while the “thousands lugged in a van by the boys” did not. Some of them did not even sign, he said); and, most importantly, the objectors are almost always absent. 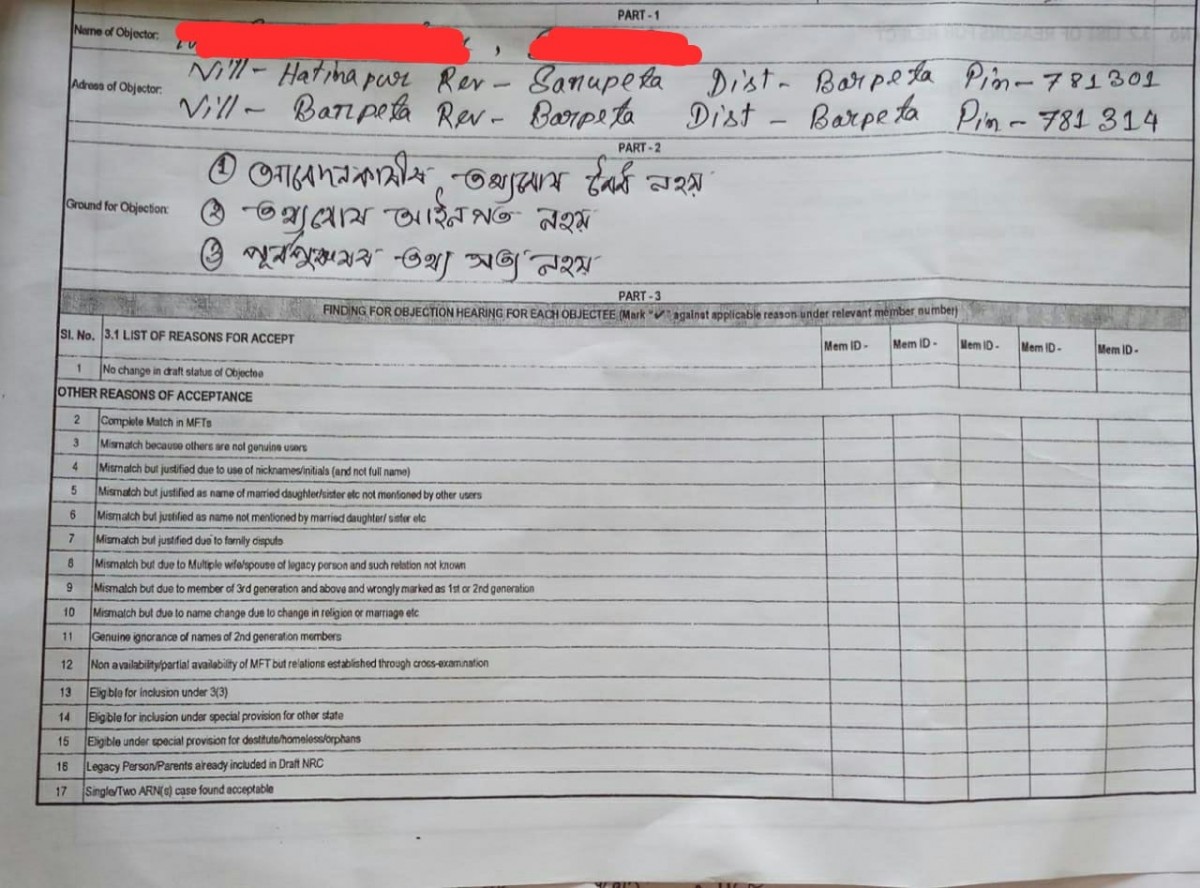 An objection form with three objections that are same in thousands of forms, with no supporting
documents whatsoever. The ‘ground for objection’, in translation, reads:
1. The data provided by the applicant is not legitimate.
2. The data is not legal.
3. The family tree is incorrect.

“We began disposal of objections on May 6. Not one objector has produced himself at the hearing. I am still waiting to meet one,” said a DO. I asked Bhattacharya, the undisputed overlord of not just AASU but of Assamese sub-nationalist politics itself, why his boys are not present, if they are confident that the accused are, in fact, doubtful citizens. He said this is because there is a threat to their lives if they come to the fore. The real and simple reason, however, is a physiological impossibility: how can the same person simultaneously attend hundreds of investigations he proudly let loose?

The role of the DO in such ex parte proceedings becomes extremely responsible and crucial. Mahidul Islam, a teacher from Mandia under Baghbar circle, whose father’s name figures on the NRC of 1951 and who has a voter identity card, a PAN card, a driving licence, an Aadhaar Card, a bank passbook, an insurance policy, land documents and degree certificates, took leave from the government school he teaches in and reached the hearing in time. The DO interrogated him without putting a word on paper.

“I requested him to at least make a note that the objector is absent in the hearing. He refused to do that too, saying that he may show up at some other time,” the teacher, who left the DO’s office anxious and unconvinced, told me on the phone.

Since Assamese nationalism has historically been staunchly linguistic, the Muslims in Assam are not one entity. The Assamese-speaking ‘indigenous’ Muslims have traditionally sided with all projects of linguistic regionalism like – but not limited to – the Assam Movement (1979-1985). The movement as well as the ideological project has one single enemy: the Bengal-origin Muslims of Assam, most of whom speak non-standard variants of Bengali and Assamese at home and are economically impoverished. They are what the Assamese-speaking population popularly refers to as Bangladeshis or Miyas.

The process of objections gives this political history of Assam a comic twist. How were the Bengal-origin Muslims and Hindus identified and reported en bloc? The potential objectors sat down with the complete draft NRC and jotted down the Application Receipt Numbers (ARN) of all the names that were either Muslim or bore an ethnic Bengali surname.

Also read: The SC Is Exceeding Its Brief as the Apex Judicial Organ in the NRC Case

The result of this exercise was sometimes funny. Quite a few ‘indigenous’ Muslims and some Hindus with specific surnames also woke up to notices under the Citizenship (Registration of Citizens and Issue of National Identity Cards) Rules, 2003. “A man from my village, a politically smug Kalita (an Assamese caste), came to the DRCR (District Registrar of Citizenship Registration) office one day. Surprised, I asked him what happened. He said he had got a notice too. It took me some time to realise that he had a confusing surname – Roy,” a DRCR functionary told me about one such incident.

Another among numerous such cases is Kalimuddin Ahmed. Kalimuddin was an AASU leader during the Assam Movement and continues to lead the Asom Gana Parishad (AGP) – the political extension of the student body – in Tamulpur district. However, Ajay Bodo, AASU president of the same district, had Kalimuddin as one of his 250 targets as he was readying his cyclostyled objections.

Do you miss Lakiful’s leadership in such times of unprecedented struggle, I found myself asking Taison Hussain, president of All Bodoland Minority Students’ Union (ABMSU) for the district, referring to the popular leader who was assassinated in 2017 in broad daylight. With escalating religious victimisation, I met more and more people talking about the void left by Lafikul Islam Ahmed.

Kamal Kumar Medhi, a Congress leader from the state who I contacted, called it AASU’s last-gasp attempt. “It remains a fact that not many Bangladeshis have migrated illegally after 1971 – the cut-off date for enrolment in the NRC. If this gets officially proven for once and for all, where will AASU’s legitimacy and bread-and-butter lie after the publication of the final NRC on July 31?” he asked me rhetorically.

With no local and national media reporting this frightening development half as much as they did the protests against the Citizenship (Amendment) Bill, 2016, I decided to travel to some areas with a considerable Bengal-origin Muslim population.

One such place was Kajiamati, an off-the-map village situated at some kilometres from Barpeta Road. A public awareness meeting was underway. The nervous villagers – all of them visibly poor Muslims – huddled together to listen to two of the more-educated men from the community, Shajahan Ali Ahmed and Abdul Kalam Azad, and understand how to go about the objection process on the day of hearing.

Jaharuddin Ahmed, one of the villagers, said that one Jagadish Pathak objected to his enrolment in the NRC. “There is no Jagadish Pathak in my village, nor do I know anyone by that name,” Jaharuddin complained. One after the other, the inhabitants of Kajiamati detailed their tribulations. 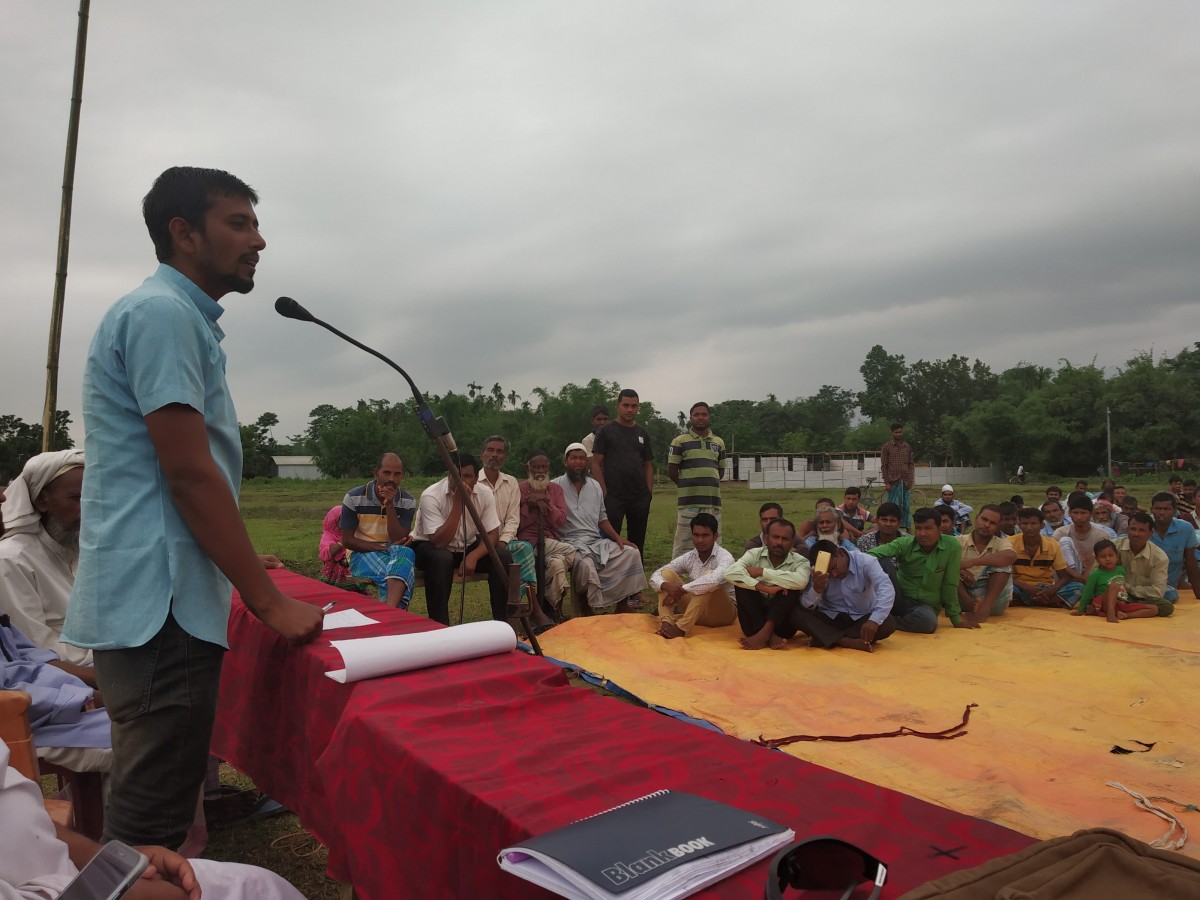 Shajahan, who works with the Association for Protection of Indian Citizenship Rights, rose to speak. “Aapni ki ei desher naagorik noi? Aapni ki Bangladeshi? (Aren’t you a citizen of this country? Are you a Bangladeshi?)” he asked the crowd. They roared ‘no’. He broke the legal process down for his unlettered audience, who heard him in rapt attention. The children, a lot of whom have notices in their names, frolicked on in the background as their parents looked high and low for a way to bring them up beyond the boundaries of a detention camp.

When I accompanied Shajahan to the town, dusk was setting in. He broke his fast with a cold drink and sighed, “We demanded the NRC and had full faith in it throughout. But it turned out to be a waste of Rs 1,200 crore, supervised by Prateek Hajela with Samujjal and Himanta (Biswa Sarma) as his accomplices.” Are you saying this off the record, I asked. “No, no,” he flung back but with an assured smile, “Everything I say is on record. We have nothing to lose. Lafikul was shot dead because he spoke truth to power. Please also ask if the chief justice of India is complicit in this waste.”

Jyotirmoy Talukdar is a writing tutor at Ashoka University. He freelances for various publications in English and Assamese.