In the Idea of an 'All India NRC', Echoes of Reich Citizenship Law

While the NRC does not identify persons ‘of Indian origin’ on the basis of religion or ethnicity, when clubbed with the impending Citizenship Amendment Bill, those deprived of citizenship will solely be Muslims. 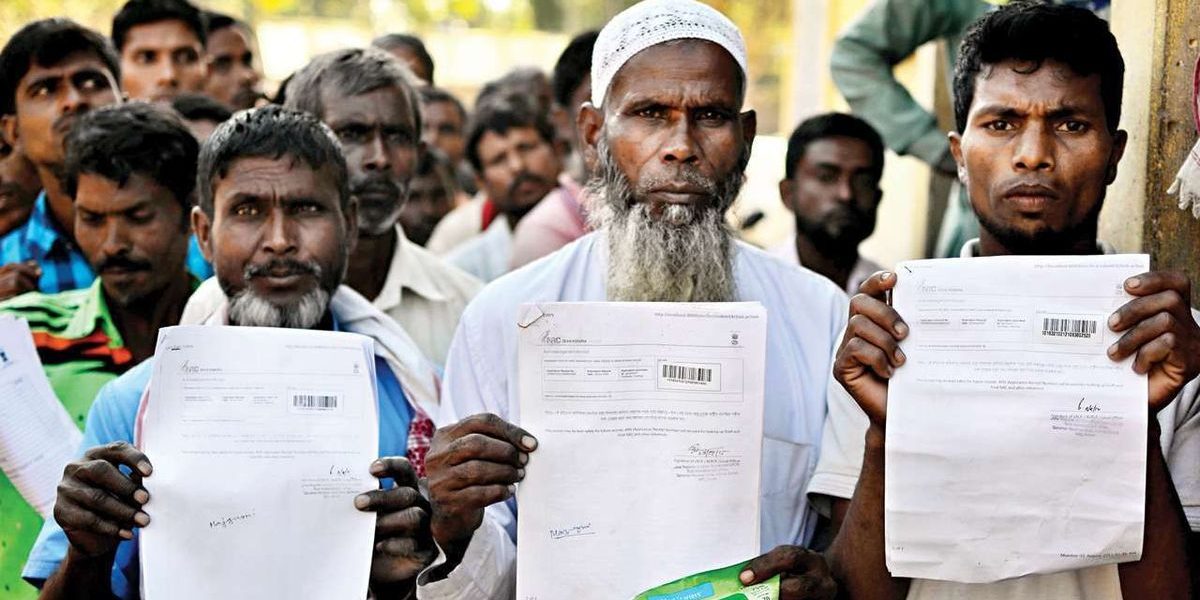 People show their acknowledgement receipts after checking their names in a draft for National Register of Citizens, in Guwahati. Photo: PTI/Files

The Ministry of Home Affairs issued a notification on July 31, 2019, stating that the Central government has decided to prepare and update the population register in the rest of India other than the state of Assam. Meaning that the exercise to update the National Citizenship Register (NRC) in Assam will now be implemented throughout the country.

Much has been written about the flaws inherent in the NRC process. The very idea that every person who was born in the country and has lived here all of her or his life should be able to furnish documentary proof of residence and familial relations emanates from a privileged notion of home and family life.

For one, it does not accommodate the homeless. Assam, for instance, is a flood-prone state where every year, during the monsoons, the Brahmaputra and its distributaries flood the riparian areas. Each year, many who do not live in pucca houses lose all their possessions and escape with their lives to start afresh.

These persons are now required to produce papers to establish their residence before March 24, 1971, or their relationship with parents or grandparents who can so establish residence. If they fail to do so, they will be declared illegal immigrants. Similarly, the process does not take into account orphans, abandoned children or youngsters who ran away from home to escape abuse and built their lives elsewhere.

The idea that for every citizen, there is a loving parent who has maintained birth records is deeply flawed. Therefore, the NRC, at every stage, excludes the most underprivileged. While the process excludes persons without reference to their religion (although going by the Sachar Committee report, there is a disproportionate representation of Muslims in the weakest economic classes), the government is, in parallel, pursuing the Citizenship Amendment Bill, which amends the Citizenship Act, 1955 to make undocumented migrants who are Hindus, Sikhs, Buddhists, Jains, Parsis and Christians from Afghanistan, Bangladesh and Pakistan – basically anyone who is not a Muslim – eligible for citizenship.

Also read: Floods and NRC: A Toss up Between Life and Citizenship

Putting the two together, the overall effect is that Muslims who are unable to establish citizenship will be declared illegal immigrants. And going by the spate of laws recently passed by the Rajya Sabha, not much stands in the way of the Bill becoming law.

File photo. People check for their names on the final draft of the state’s National Register of Citizens after it was released. Photo: PTI

In a recent development, the Supreme Court on August 13 passed an order clarifying certain queries raised by the state coordinator of the NRC and dismissing a batch of applications filed by affected persons on the same issue. The question before the court was regarding the status of children born in India after December 3, 2004, one of whose parents was a “doubtful voter” or “declared foreigner” or whose case was pending before the Foreigners Tribunal or some other court, though the other parent was validly included in the NRC.

Chief Justice Ranjan Gogoi, speaking for the Supreme Court, held that even if one of the parents of such children was unable to establish citizenship in the NRC process, the child would not be entitled to have his or her name included in the NRC. The court noted that these very questions were pending before the constitution bench and would be decided in that case. Meanwhile, the state coordinator could proceed based on the above understanding for purposes of the NRC exercise for the present.

Parallels with the Third Reich

The status of a citizen was acquired by the granting of citizenship papers by the government of the Third Reich. All political rights were available only to citizens granted papers under this law. The regulations that followed these laws struggled to define who a ‘German’ was and differently classified individuals of mixed Jewish and German parentage. 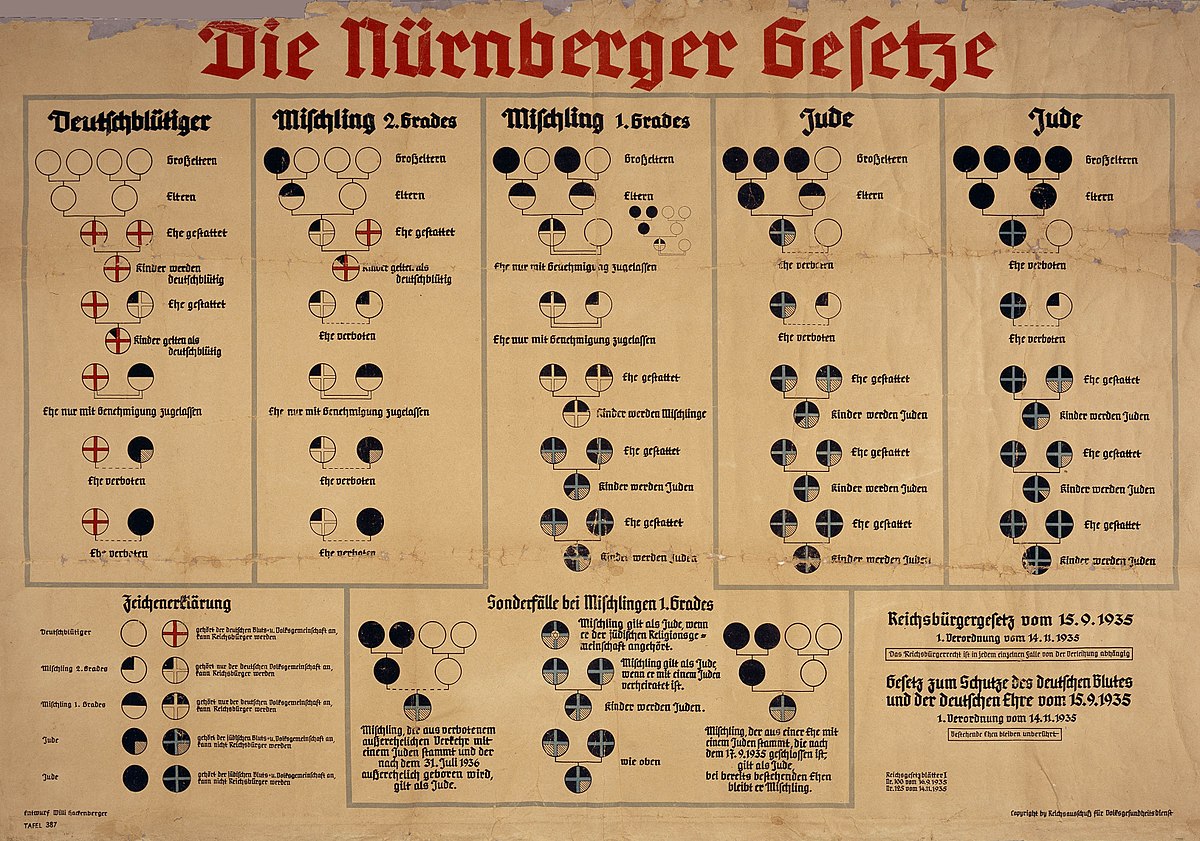 Children and grandchildren of Jews who had married Germans and in some cases had even converted to Christianity and who thus far had seen themselves as German found themselves unable to pass the test and were denied citizenship.

Under these laws, an Ahnenpass (literally, ancestor pass) was issued to those found to be of “Aryan blood”, which was a record of the family tree of the individual and entitled the holder to citizenship rights. This again bears a striking similarity to the NRC process, where the family tree of each individual is being constructed, which will be reflected in the NRC extract, and will show that the ancestors of the holder have been verified to be ‘of Indian origin’. This will then entitle the holder to rights available to a citizen under the constitution.

In Nazi Germany, since the question of who qualified as a German came to depend on religion (Jewish or Christian), the Nazis had to rely on birth, baptismal, marriage, and death certificates for issuance of citizenship papers. People scrambled to obtain these certificates typically maintained in churches and government offices, to establish their relationship with German (meaning Christian) grandparents.

With the NRC in progress in Assam and now with the issuance of the notification by the Ministry of Home Affairs for implementation of a population register throughout the country, as people scramble to collect birth certificates, ration cards and other documents establishing their connection with Indian parents and grandparents, one cannot help but sense a glimmer of past events.

The only difference being that the Indian NRC does not identify persons ‘of Indian origin’ based on religion or ethnicity. However, as mentioned above, if the Citizenship Amendment Bill in its present form comes to be passed, those who are denied citizenship will solely be Muslims and all others will be granted refugee status and allowed to remain in the country.

What is most inexplicable about how the Supreme Court has conducted these proceedings is that – as the court itself mentions in the August 13 order – questions that form the very basis of the NRC process have been referred to a constitution bench and are still pending adjudication.

The fixing of March 24, 1971, as the reference date for the exercise of Section 6A of the Citizenship Act is itself the major plank of the challenge before the constitution bench. So someday, after the entire population of the state is asked to demonstrate that they came to India prior to March 24, 1971 in an exercise that has taken years and hundreds of crores of the public exchequer and in which lakhs of people are likely to be declared stateless, the Supreme Court will sit to decide, in hindsight, whether that date had any constitutional basis.

Another question to be decided is whether, after over 40 years of living in India, a person can be displaced even if found to be an illegal immigrant. The constitutional validity of Sections 3(1)(b) and (c) of the Citizenship Act which form the basis of the August 13 order is itself under challenge in another writ petition and has again been referred to a constitution bench, which again has not yet been constituted.

To put the court’s sense of urgency around the formation of that bench into perspective, of the many cases referred to five-judge benches of the Supreme Court, two cases, in particular, were jostling for a hearing in the summer of 2017. The Supreme Court decided that while the constitutional basis for the NRC exercise could await its turn, the practice of triple talaq that persisted for 1400 years could not be tolerated for another summer and the issue of the constitutional validity of the practice required the immediate attention of the court.

And so, that challenge was listed for hearing before a specially constituted 5-judge bench that held hearings over the summer vacations and pronounced the well-known Shayara Bano judgement that is now part of our recent constitutional history. Meanwhile, the NRC exercise – which is likely to render lakhs of people stateless  – was allowed to go on without any examination of its constitutional basis.

The upshot of the above discussion is that the very basis on which the NRC exercise is proceeding is still to be adjudicated upon. Further, there is no clarity on what will happen to persons declared as illegal immigrants in this exercise. At present, there is no scope of deporting them since there is no existing agreement with Bangladesh to accept immigrants, nor is Bangladesh likely to suddenly accept lakhs of persons, that it has no record of – most of whom were born in India. 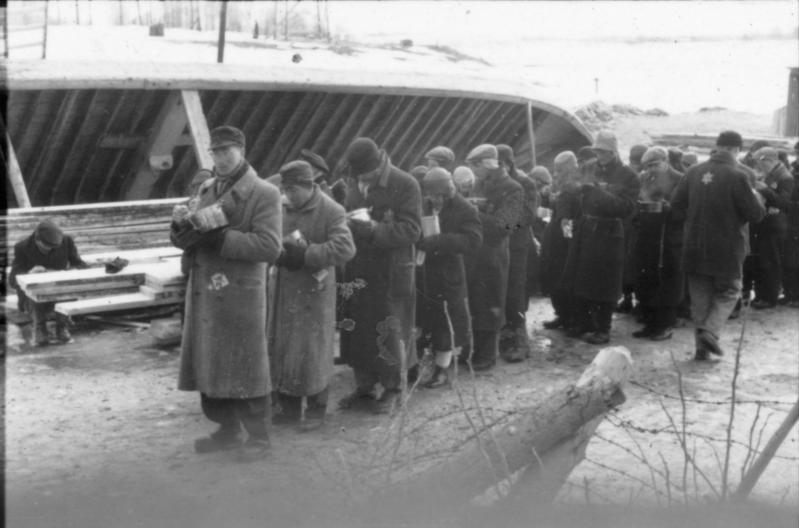 The Supreme Court is considering this question in a separate petition filed by activist Harsh Mander and meanwhile has asked the state of Assam to submit a report on the number of its detention centres and their capacity. These detention centres again remind one of concentration camps.

The homes of Jews who were taken away to concentration camps were looted and often occupied by their ‘German’ neighbours. Would the same not happen to persons who are declared illegal Bangladeshi immigrants and removed to detention centres? Should not an adjudication on the question of the consequences of exclusion from the NRC, therefore, be the focus of attention of the Supreme Court before declaring lakhs of people as non-citizens and visiting the social consequences of statelessness on them?

Instead of discharging this judicial function, why is the court expending its energies in issuing day-to-day directions regarding the implementation of the process like an administrative authority? Unfortunately, these questions cannot be asked of the court, because while it may have taken upon itself to discharge executive functions, it is still not answerable to the people.

Nizam Pasha is a lawyer practising in the Supreme Court and has appeared in the NRC matter. The views expressed are personal.