Designated as foreign nationals living illegally in India, women, men and children, mostly poor, illiterate and from marginalised communities, suffer under inhumane conditions at these centres. 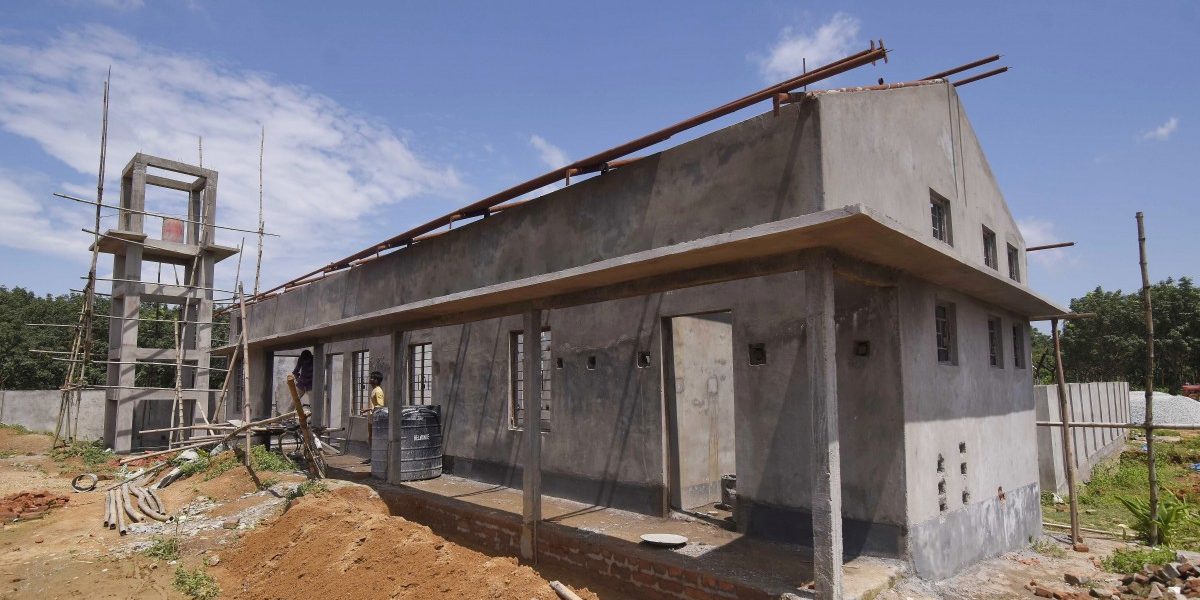 Labourers work at a school building inside the premises of an under-construction detention centre for illegal immigrants at a village in Goalpara district in the northeastern state of Assam, India, September 1, 2019. Photo: Reuters/Anuwar Hazarika

Barpeta/Goalpara/Baksa/Bongaigaon, Assam: Most of us in India do not know how it feels when our right to be proud of the tricolour is arbitrarily taken away from us. But when Kaddus Miya walked through the red gate that led to the Goalpara detention centre, he knew this feeling very well.

The 71-year-old from Barpeta in western Assam spent nearly three years in the Goalpara detention centre from June 2017 to April 2020 because, according to Assam’s foreigners’ tribunal, his Indian citizenship is in doubt and he was declared a foreign national.

Like Kaddus, hundreds of women, men and children in Assam have been sent to the six detention centres in the state because their citizenship is disputed. Some have been released, but others are still crammed in cells at these centres that are known for their inhumane and distressing conditions of living.

Several million others in the state live in extreme anxiety, afraid of losing their citizenship through processes like the National Register of Citizens (NRC), D voter (doubtful or dubious voter, a category of voters in Assam who have been disenfranchised because of an alleged lack of proper citizenship documentation) and references by various government agencies.

Most of the people dealing with citizenship disputes in Assam are poor, illiterate and from historically marginalised communities. Unable to afford even their daily needs, they certainly cannot afford legal representation, which explains why, when asked how it feels to have their citizenship questioned, one of them said, “Like the sky is falling on our heads.”

So far, Assam’s foreigners’ tribunal, a quasi-judicial body ill-famed as an extended arm of the government, has given more than 1,30,000 people the status of ‘declared foreign national’. This makes them stateless and until their citizenship of India is proved or they can be repatriated, they are sent to the detention centres. In May 2019, after a long legal battle, the Supreme Court of India ordered the conditional release of detainees who had spent more than three years in detention. After the advent of the COVID-19 pandemic, the apex court further slashed the time of detention to two years, to decongest the centres. Now, many of the detainees are out on bail.

Kaddus Miya lost his father when he was a 13-month-old infant. Then for 13 years, he worked as a pet-bhati, a near slave, labouring in exchange for food. As a grown up, Kaddus, like many other poor, landless people, applied for a plot of government land as part of a state government scheme for the rehabilitation of victims of land erosion.

But instead of allotting him the land, the government alleged that he was a foreigner even though his name had been recorded in the 1951 NRC. A foreigners’ tribunal then declared that Kaddus was a foreign national and he was taken to Goalpara detention centre from where, after almost three years, he was released on an interim bail order from the Gauhati high court.

Goalpara detention centre, said Kaddus, is a dark place, devoid of light and hope. “Sometimes 60 to 70 people were crammed into one room like a herd of cattle. After 5 pm, there was no one to listen to our plight,” he said. According to him, the detention centre officials planted three or four convicted criminals in each cell to discipline the detainees.

Adam Ali, a detainee from Baksa district, said that when he first entered the Goalpara detention centre on December 2, 2016, where he remained till April 2020, the cells had been without toilets. Those who needed the toilet had to be escorted elsewhere by a guard. “Sometimes, the elderly detainees couldn’t wait and defecated in their clothes and on their beds,” he said.

Labourers work at a construction site of a detention centre for illegal immigrants at a village in Goalpara district in the northeastern state of Assam, September 1, 2019. Photo: Reuters/Anuwar Hazarika

Later, when toilets were built inside the cells, the upper portions of the toilet doors were kept half open so the detainees could not attempt to die by suicide within the toilets. According to a detainee named Surya Miya, who was at Goalpara detention centre from August 2015 to April 2020, the design not only denied them their privacy, but the whole cell smelled foul.

Detained in Kokrajhar detention centre for eight months between October 2016 and August 2017, Arjina Bibi of Goalpara district had been a victim of mistaken identity. She had had no case against her, but had been arrested by the police as a declared foreign national. “In the detention centre, I couldn’t eat, I couldn’t sleep,” said Arjina. “I could only wonder what I had done for them to put me in this hell.”

The food the detainees received was insufficient and substandard. According to Rabiya Begum, who was arbitrarily declared to be a foreign national named Mabiya Begum and detained at the Kokrajhar detention centre between May 2016 and October 2019, the roti the inmates received with their meals was as thin as the skin of a garlic clove.

The insufficiency of food and other essential commodities allowed corrupt detention officials to set up a fully-fledged illegal market inside the detention centres, where articles were sold to the detainees at exorbitant rates.

When Kaddus Miya’s son once gave the guards a hen, requesting them to slaughter and cook it for his father, the guards ate the chicken themselves, leaving just the neck pieces for the detainee. “I returned the plate and skipped that meal,” Kaddus said.

For Adam Ali, the detention centre was a graveyard of the living dead, filled with hopeless bodies controlled by an unknown power. The detainees frequently thought of death and heard news of death. Ali himself witnessed three deaths in the detention centre. One of the three was a young Bengali Hindu man from Goalpara. “He was leaning against the wall of the cell. He didn’t speak and move for a long time. When someone touched him, he fell down. He was dead,” said Ali.

Crammed together without privacy and hope, many detainees began to lose their grip on reality, said Arjina. “Always, someone was singing, someone was crying, some were dancing, some were talking without a break. When new detainees came and cried, everyone cried,” she said.

When Adam Ali was arrested, the police had told him that he would be freed as soon as a higher court overruled the tribunal’s order. But in the detention centre, he found detainees who had been there from five to seven years because no courts had overruled the orders of the tribunal. He also met a few actual Bangladeshi and other foreign nationals who were desperate to return to their countries but had been languishing in detention for years.

An illiterate man, Adam Ali believes his only crime was that when he was asked by the foreigners’ tribunal to name Assam’s chief minister, he could not answer. “I have not even killed an ant, how they can punish me more than people who have committed heinous crimes like rape and murder?” he asked.

Like Adam, many people had no idea why they had been declared foreigners. Ultimately, said Surya Miya, the detainees decided to go on a hunger strike until they were told by the government what would happen to them.

The hunger strike that followed was organised on the lines of Gandhian satyagrahas (search for the truth). The detainees asked the detention centre authorities, “Why are we here? How long will we have to survive on substandard food and live in these subhuman conditions?”

According to Adam, the officials told them: “We are like animal herders. We are here just to feed you and look after you. We can’t take decisions. We just follow orders.”

When the officers requested them to break their hunger strike, the detainees demanded, “Bring us those who take decisions.”

Officials came and went, begging the detainees to break the strike. “The officers were compassionate; they arranged medical support for us. But they didn’t have answers. They were also helpless,” said Kaddus Miya.

On the seventh day of the hunger strike, the detainees were visited by the deputy commissioner (DC) of Goalpara. “While listening to our stories, the DC became emotional and promised to do her best to release us. We called off the strike,” Surya Miya recalled. 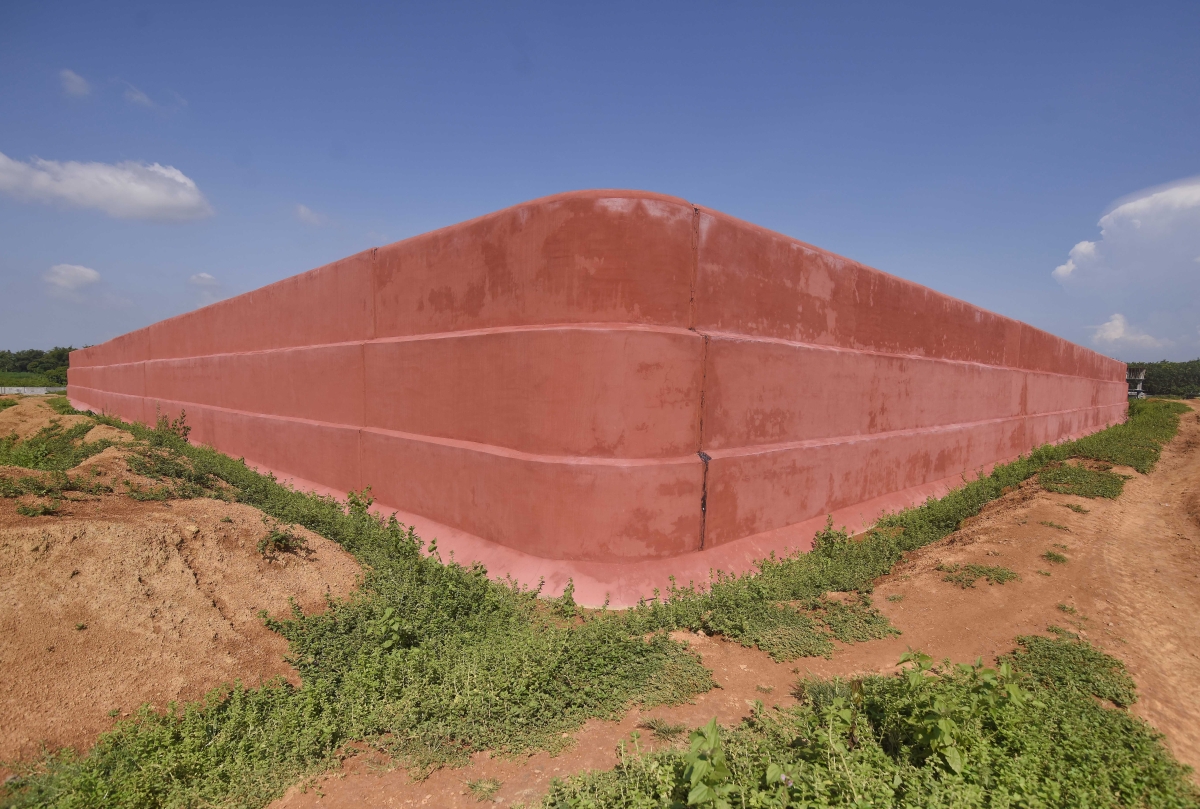 An outer wall of an under-construction detention centre for illegal immigrants is pictured at a village in Goalpara district in the northeastern state of Assam, September 1, 2019. Photo: Reuters/Anuwar Hazarika

After a few months, the Supreme Court passed an order to release those who had spent more than three years in the detention centres, after hearing a case filed by human rights activist Harsh Mander. “When we heard that the court had ordered our release, we were mad with joy,” said Surya Miya.

Because Kaddus Miya had not completed his three years at the detention centre, he was not eligible for release. But in the latter part of his third year in detention, Kaddus Miya’s family sold their only plot of land and paid a lawyer Rs 80,000 for his bail from the Gauhati high court.

When a guard told Kaddus Miya that the court had ordered his release, he couldn’t believe it. “I said I will only believe it when I cross the red gate,” he told The Wire.

Now Kaddus Miya and many of his fellow inmates are out on conditional bail. But they are not free. Every week they need to visit a designated police station and they cannot travel beyond the jurisdiction of their local police station. They have also lost significant portions of their lives to the detention centres.

Kaddus Miya has a fatty liver, prostate problem and suffers from sleeplessness. Surya Miya lost his wife while he was incarcerated. His children are now with adopted parents. Rabiya lost her husband. Adam Ali is trying to regain his physical and mental strength to pull a thela (cart) once again, to feed his ailing parents and physically challenged daughter.

Note: The names of the detainees have been changed to protect their identities