The 1,200 plus employees of the defunct Nagaon and Cachar paper mills are already beleaguered over non-payment of their monetary dues ever since the suspension of operations. 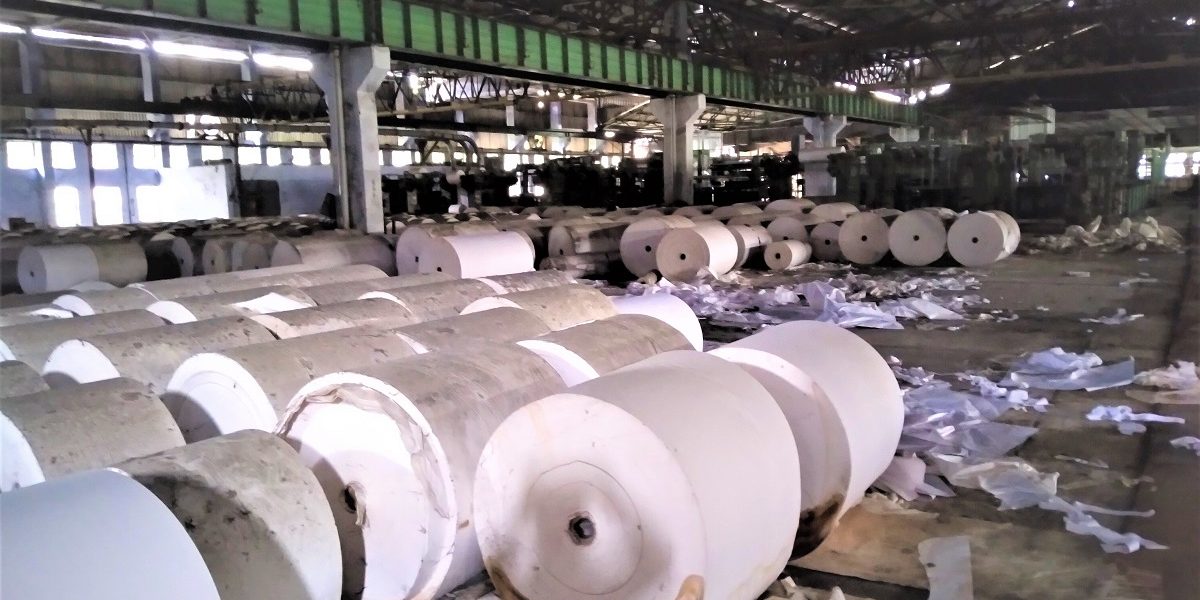 Guwahati: The debt-ridden and now-defunct Nagaon and Cachar paper mills of the government-owned Hindustan Paper Mill Corporation Limited (HPCL) may now soon find itself going under the hammer with the issuance of an e-auction notice the content of which was put in a national newspaper dated June 1.

The reserve price as per the auction notice was put at Rs 1,139 crore.

For the mills’ 1,200 plus employees, who are already beleaguered over non-payment of their monetary dues ever since the suspension of the mill’s operation, and who are also battling it out so that the two mills do not go bankrupt, the issuance of the e-auction notice now denotes another level of uncertainty that stares at them, and the auction announcement is indeed worrisome for them.

The announcement of the mills’ auction comes after Amit Shah, in one of his election campaigns at Sarbhog in Barpeta district on April 4, said that the BJP-led government will not only revive the paper mill but augment paper production, increase bamboo production in Assam and scale-up paper distribution all over India. 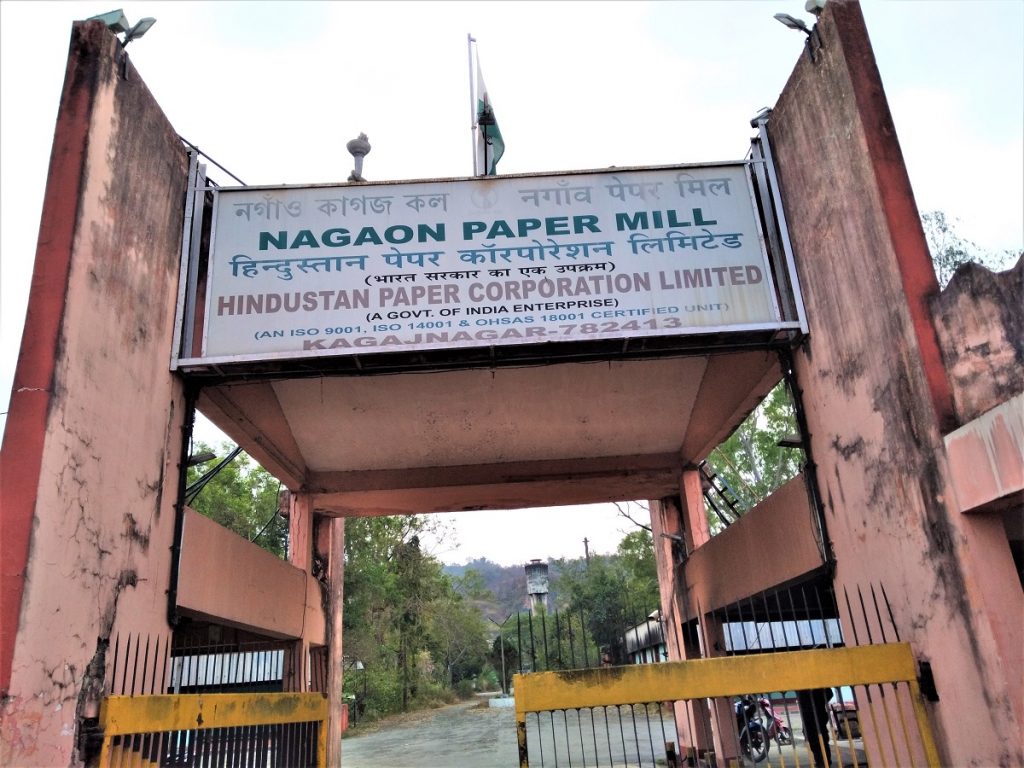 The two paper mills have been rendered defunct over lack of working capital as HPCL owes an amount of Rs 98 lakhs as unpaid dues to Alloys and Metals (India), a company.

Over 1,200 employees from the two paper mills are yet to be paid their remaining monetary dues which include pensions, salaries, provident funds and others.

The total dues of the mills’ employees until December of 2019 was over Rs 620 crores.

The long wait of their dues has resulted in 87 deaths. The deceased could not avail proper medical care on account of their depleting financial resources due to non-payment of their monetary dues.

Out of the 87 dead employees, four died by suicide.

The e-auction notice, which was advertised in a national newspaper on June 1, said the mills will go under the hammer on June 30. The auction proceedings will also be live telecast on a web portal from 10 am to 6 pm.

The e-auction notice was issued by Kuldeep Verma, the liquidator of corporate debtor (HPCL).

The notice also stated that the e-auction will be conducted on ‘As IS WHERE IS’ and ‘WHATEVER THERE IS BASIS’ through approved service provider MSTC Limited.

The battling employees expressed that the liquidator should have at least pursued consent from the governments (both state and Central) before announcing the auction notice.

On June 2, the Joint Action Committee of Recognised Unions (JACRU) Nagaon and Cachar Paper mills in a letter to chief minister Himanta Biswa Sarma said that the reserve price of Rs 1,139 crore has ‘ignited statewide resentments’ and ‘the reserve price is underestimated and should not been attempted for sale prior to exercising any efforts to ensure that the Industries which are wholly-owned by Union of India remains a Going Concern with the active participation of the government of India and Assam’.

Manabendra Chakraborty, JACRU president told The Wire that the e-auction notice as issued in the newspaper is against the National Company Law Appellate Tribunal (NCLAT) order of May 29, 2019.

Chakraborty added, “This is worrisome for us. The NCLAT order said that the government should infuse fund and the liquidator should approach the government to release the fund to ensure that the HPCL remains a going concern. We do not know what steps the liquidator is taking or what talks are going on between him and the government. This is an internal matter. If on any day, the mills are handed over to a third party, the employees should also be included along with the handover of the mills. The NCLAT order was on reviving the mills. Now, the auction has been planned. The government should have come to an agreement with the liquidator. This news has brought a certain amount of uncertainty among the employees.” 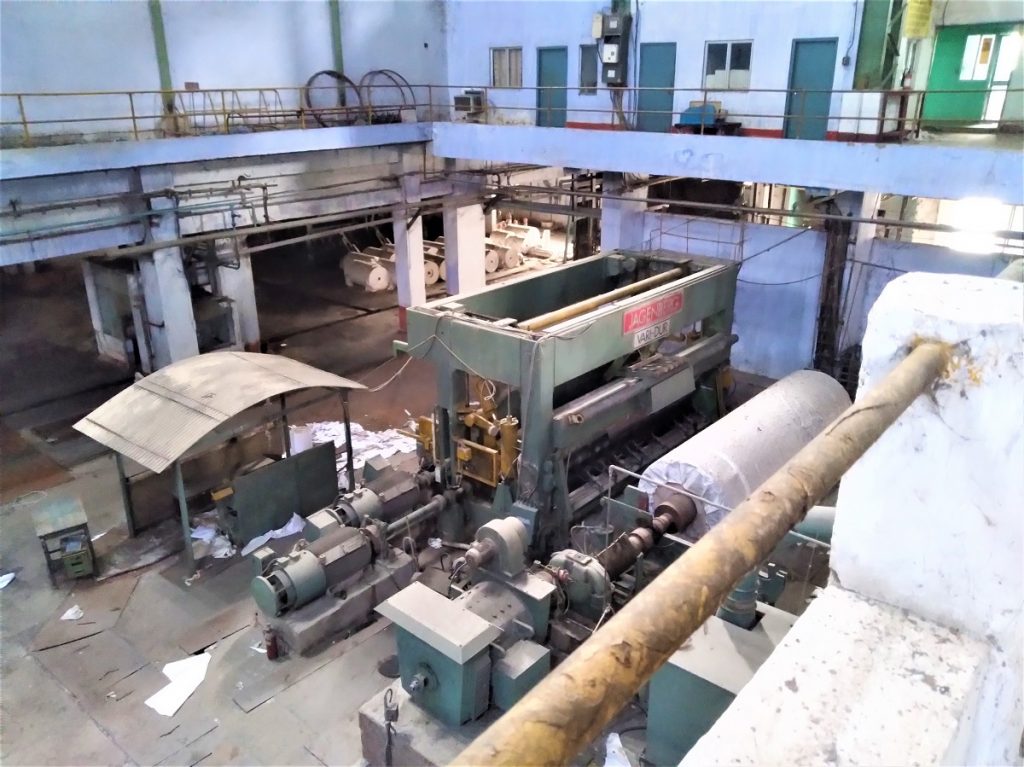 Inside one of the many wings of operation of the Nagaon Paper Mill. Photo: Gaurav Das

It is to be noted that Alloys and Metals (India), the company to which HPCL owed Rs 98 lakh, petitioned the National Company Law Tribunal (NCLT) in 2018 under Section 6 of the Insolvency and Bankruptcy Code, 2016 (IBC). It sought the recovery of Rs 98 lakh.

On May 13, 2018, in its response to the petition, the NCLT under the Insolvency and Bankruptcy Code, 2016 (IBC) directed the initiation of Corporate Insolvency Resolution (CIR) against HPCL.

The NCLT under the provisions of the IBC not only suspended HPCL’s board of directors but also instated a resolution professional (RP) and a committee of creditors (COC).

Part 2 of the IBC defines an RP as an insolvency professional appointed to conduct the CIR. The RP needs to submit a resolution plan, which will be proposed by any person for insolvency resolution of the corporate debtor as a going concern in accordance with Part 2.’

The failure on the part of the resolution professional to come up with a resolution plan within a stipulated 270 days the NCLT on May 2, 2019, ordered for the liquidation of Nagaon and Cachar Paper Mills. The order stated, “There is no resolution plan and 270 days of the CIR process are already over, this application merits consideration.”

An appeal was made against this order at NCLAT.

It also said the corporate debtor remains a going concern and scheme or arrangement may be reached under Section 230 of the Companies Act, 2013 or it can be sold as a going concern along with its employees/workmen to a third party.

It said, “Union of India though party before us in one of the appeal, is expected to release certain funds from the Consolidated Fund…”

On September 14, 2020, the liquidator of the corporate debtor filed a fresh application at the NCLT for liquidation of the paper mills.

This application was submitted after the state government had sought a month’s time from Verma (the liquidator) for the mills’ revival.

The state government in a letter to Verma mentioned that it was making efforts to revive the mill and pursuing the matter with the central government.

On April 26, 2021, the NCLT rejected the interlocutory application.

It said, “There is no need to give any further direction to the liquidator. The liquidator is well advised to proceed as per the direction given by the NCLAT.”