Widely circulated, the list of nearly 400 people from Assam who were near Nizamuddin contains the phone numbers and other details of suspected COVID-19 affected. 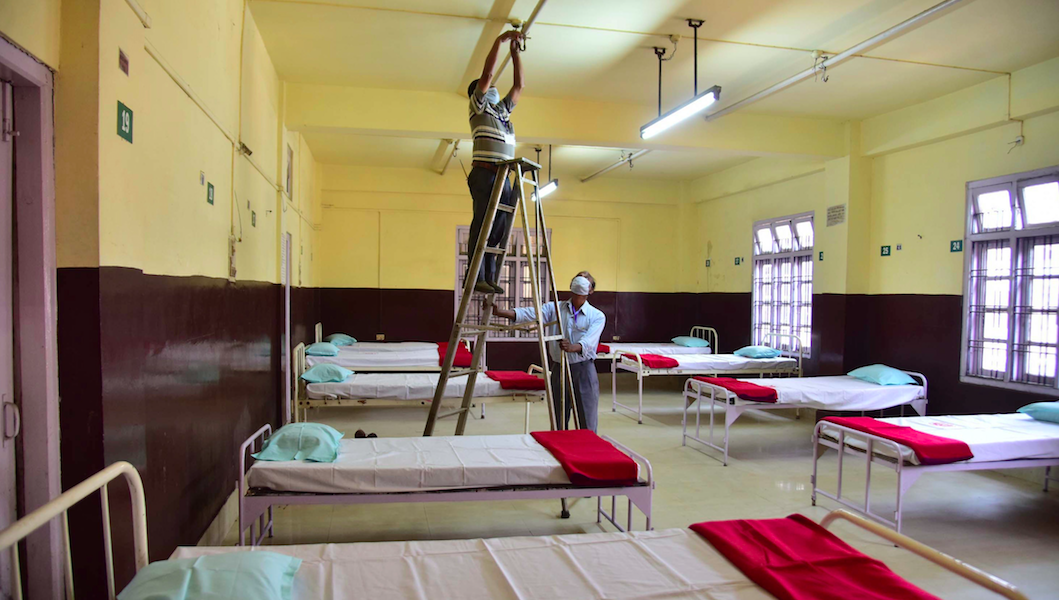 Representative image. Workers prepare an isolation ward at the Civil Hospital in wake of coronavirus pandemic, during the nationwide lockdown, in Nagaon District of Assam, Tuesday, March 30. Photo: PTI

On the same day, media (both national and local) been amok with reports on the religious function in New Delhi’s Nizamuddin. Local media focused on the alleged fact that 400 people from Assam had attended the Markaz of the Tablighi Jamaat, which started on March 13. Nizamuddin has now been labelled a COVID-19 hotspot.

This led to speculation as to whether the Karimganj patient had also attended the meet. Assam health minister Himanta Biswa Sarma, speaking to local reporters, said this has not been ascertained yet.

“The person’s travel history will only be disclosed on April 1 (Wednesday),” he said.

“We had taken swab samples from the person and the samples were sent to the National Institute of Virology in Pune. He is undergoing treatment at Silchar Medical Hospital…Meanwhile, contact tracing protocol has already been put into place. We have known that there is a patient since yesterday (March 30). People who have been in contact with the patient have been put into quarantine. Based on the patient’s condition we had a suspicion and his samples were sent to NIV. He is stable as of now,” said Sarma, adding that he got ill on March 18.

On the same day, the state government came out with a ‘list’ of around 400 plus people from Assam thought to have attended the religious event.

In a tweet Sarma initially said 299 people had been found to have been there.

Assam Govt is now in possession of a list of 299 persons who were present in and around the hotspot near Nizamuddin Dargah. We’ve alerted dist admins to find out if these people have returned to Assam, and strict instructions issued to quarantine them if they are in the state

Hours later he once again tweeted, “We have received another list of 157 persons from Assam…”

#NizamuddinUpdate ~ We have received another list of 157 persons from Assam who were near hotspot of Tablighi Jamaat at Nizamuddin Dargarh. We are acting swiftly and in best possible manner to quarantine all of them, as and when they reach Assam or those who may have reached.

The Wire reached out to some people from the ‘list’. One said, “I was there at the event and now I am going for testing. But several others here are not.” The person said that they arrived in Delhi on February 9 and that their family “is not worried.”

Some of the names in the ‘list’ said they had nothing to do with the religious congregation. “I have a perfume business and I didn’t attend the religious programme. I arrived in Delhi on March 13. And I am stuck in Delhi,” said a person, who added that he was in isolation.

Many in the list are justifiably annoyed at having been called. “I am getting hundreds of calls. My mother is crying fearing I am carrying the virus. Nizamuddin is a big locality and how can just anyone from Assam visiting Nizamuddin appear on the list? This is not acceptable,” the person said, noting that it was harassment.

Sources said that the patient from Karimganj had arrived from Delhi on March 6 and he returned to Karimganj on March 16. But during his period in Guwahati, as per reports on local media, he stayed at the houses of his relatives in Hatigaon and Athgaon localities of the city.

Meanwhile according to the ‘list’ which has been titled as ‘Assam Persons Present in the Area,’ the people who had been in the area hail from districts like Nagaon, Barpeta, Morigaon, Hailakandi, Nalbari, Dhubri, Goalpara and others.