In a Remote Part of Arunachal, a 'No Road No Vote' Campaign Bears Fruit

Road connectivity in Arunachal Pradesh is in a state of disarray. People decided to boycott the elections to ensure that elected representatives do not remain disinterested.

New Delhi: In 2017, the public boycott of an assembly by-election in a remote part of Arunachal Pradesh missed making headlines outside the Northeast. A year later though, it has borne proof that it may well be a model of sorts in demanding the due of a deprived section of people in vote-driven parliamentary democracy.

On December 21, 2017, Arunachal’s Likabali assembly constituency in the West Siang district went to bye-polls. At the end of the day, five out of nine polling booths of the constituency, however, registered zero votes. The reason for the voters’ absence was a collective resolve: No Road, No Vote.

The Likabali assembly segment covers the remote Kangku administrative circle of Arunachal. The circle contains 24 notified and two un-notified villages comprising a population of about 15,000 to 20,000 people. The villages are dotted on the foothills along the way to the district headquarters Likabali, about 60-70 km away. That may not sound like much, but it’s a tough distance to cover for the villagers of Kangku.

Also Read: Northeast India May be Getting Bridges and Roads, But Local Tribes Feel Left Out

Simply because, since Independence, many governments came and went, but made no attempt to pave a concrete road link to the district headquarters. In 1992, the state government created the new administrative circle of Kangku, but nothing changed.

With no road connection within their state to reach the headquarters, the villagers, mostly comprising of Galo and Nishi tribes, have no option but to make use of the National Highway 51, situated about 12 to 15 km away, to reach Silapathar, the nearest border town of Assam in Dhemaji district, and thereafter go another seven km to Likabali. Most villagers either walk the distance to the highway or hop on to a tempo for a few bucks that tread on a mud trail cleared. Students regularly use the Silapathar route to go to Likabali for education.

“The situation is the worst when we have to take an ailing person for medical care to Silapathar. We have to carry them on our back. During the six months of monsoon, even a nullah between two villages turns into a small river. So the communication gets further restricted without the presence of an all-weather road,” related Dajo Ngomle, a resident of Bali Soli village of the administrative circle. No government official visits us because there is no road, he added. Members of the ‘No Road No Vote’ central committee of Kangku. Credit: Special Arrangement

Ngomle, who is also the general secretary of his village welfare society, said candidates from political parties promised the villagers a road link to Likabali town and between the villages. But nothing came their way. “So in 2017, before the bye-elections, people felt there was no point in voting as their main demand was never fulfilled. MLAs and MPs get elected and build their career, but the people’s sufferings without an all-weather concrete road have remained.”

The local MP is the union minister of state for home, Kiren Rijiju. Villagers recalled that Rijiju promised them a road link during his campaign for the 2014 Lok Sabha elections. “We called him to Kangku after he won the elections to update us on his promise. Thrice the dates were changed and finally, he didn’t come,” related Ngomle.

Towards the end of 2017, local youth, educated elders and members of the welfare societies of all the villages came together under the banner of No Road No Vote. A No Road No Vote central committee was soon set up. “We held our first meeting in Likhabali town before visiting every village to seek support, which was overwhelming. It gave us confidence,” said Mikjom Taso, the convener of the committee.

A public rally was held on November 18, 2017, “to send out the message to the political parties that we will not accept the status quo anymore”. Taso said the success of a small village, Sissen, in the state’s Upper Siang district, in getting a concrete road link by following the No Road No Vote campaign in 2014 gave inspiration to the Kangku villagers. “We felt that if one small village can succeed, why people from 26 villages can’t,” he said. 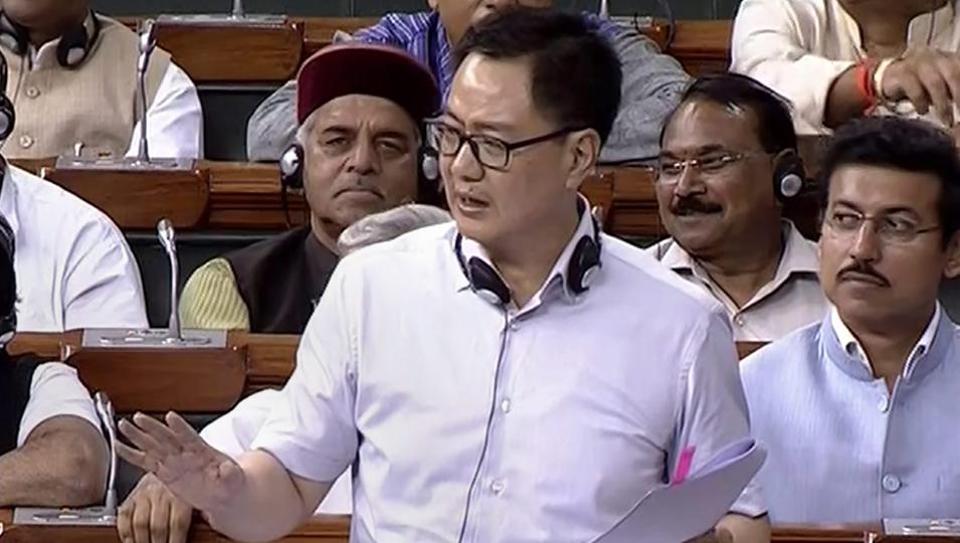 Minister of State for Home Kiren Rijiju is the local MP. Credit: PTI

Letters were written to the state government and the Election Commission of India in end-2017, informing them about their resolve. However, attempts were typically made to overthrow the decision and break the unity of the voters in the run-up to the polls by various parties, alleged Taso and Ngomle.

“Large sums of money were distributed among voters to drive them to the polling booths. Many villagers backed out of the campaign. It led to voting in four booths but voters from five booths didn’t budge,” said Ngomle. He said, “I don’t blame the people. They are poor; not everyday do they see ten or fifteen thousand rupees at one go.”

Taso said, “Rumours were spread that the central committee members had taken money from some party or the other. But we stood united. We firmed up our civil disobedience movement by announcing that if the government doesn’t heed the public demand, they would surrender their voter identification cards before the next elections.”

However, this past October 21, Likabali MLA Kardo Nyigyor told local media that at least 16 road construction projects under the Pradhan Mantri Gram Sadak Yojana (PMGSY) worth Rs 155 crore had been sanctioned for the entire constituency. He said, “Looking at the seriousness of the public demand for road connectivity in the last assembly elections in some areas, the state government has cleared projects for Kangku, Gensi, Siji, Likabali and some other circles.”

Though the local administration hasn’t yet “gone to the people to inform about it”, Taso told The Wire, “We approached the authorities after the media reports came; they have confirmed it to us. But the technical clearance is awaited. The assembly and parliamentary elections are a few months away. So till tenders are formally called and the work is completed, our movement will continue.”

The strength of the campaign can be gauged from the fact that it has caught the attention of the public of another district – Upper Subansiri. This past January, a huge rally registered their protest against the deplorable condition of the highway between the district’s Daporijo town to Ziro town in Upper Siang district, a lifeline for the people. The public has resolved not to take part in any election till the government attends to their demand.

Said Taso, “Like we were shown a way by Sissen, I am sure we are also doing it for others. This idea is bound to catch up in Arunachal, as many areas are still not connected only because of the disinterest of the authorities. Absence of connectivity is the root cause for poor socio-economic development of our people.”

Ngomle added, “It has become a standard practice for politicians to buy votes in Arunachal. So they don’t care about development work. The MLAs change colour overnight and don’t feel answerable to voters. People are getting more and more frustrated and resorting to such campaigns.”