As Rohingyas in India face rising Islamophobia, a strong tide of Hindu nationalism and anti-immigrant sentiment, the view that fires in refugees camps are due to accidents is rather unconvincing. 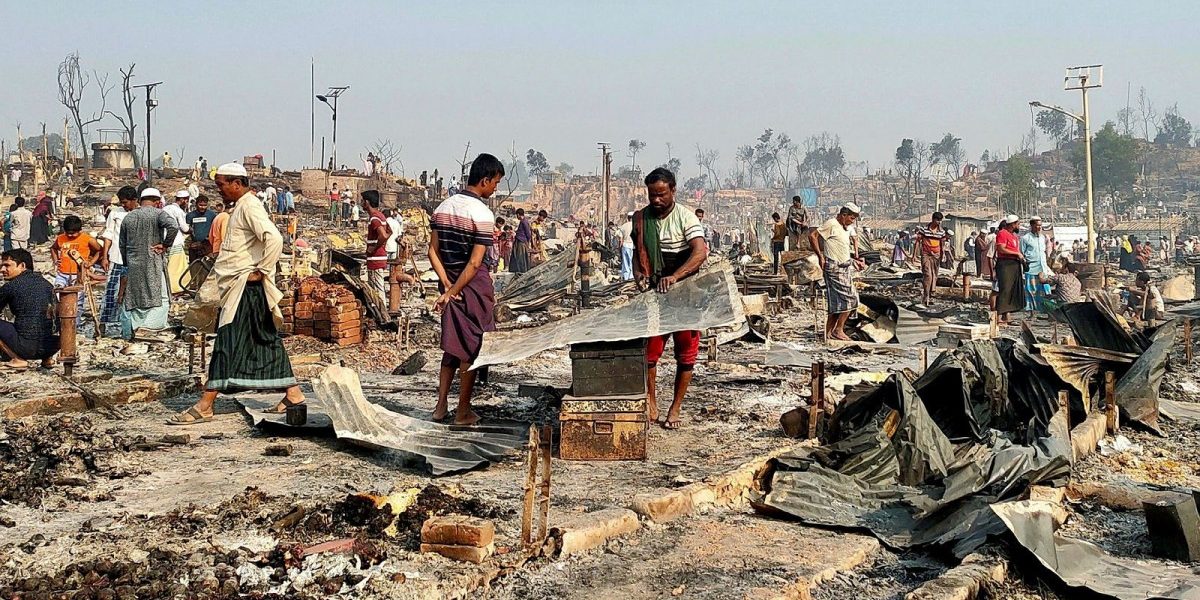 Representative image. A general view of a Rohingya refugee camp after an overnight fire at shelters in Cox's Bazar, Bangladesh, March 23, 2021. Photo: Reuters.

Rohingya refugee camps in India witnessed four fires in 2021 alone, higher than any other year prior. Between 2016 and 2021, 12 mysterious fires broke out in Rohingya camps alone. Most of these conflagrations demonstrated a peculiar trend – they catalyse at midnight, often on a disputed property, are preceded by threats of eviction or bigotry but eventually reported to be the result of bad urban planning, especially short circuit.

This peculiarity is not limited to Rohingya refugee settlements in metropolitans like Delhi and Hyderabad but also reaches regions such as Haryana and Jammu. In all such areas, the refugees live in makeshift shanties on city outskirts and earn their livelihood through ad-hoc and informal labour. Most residents in camps arrived in 2012 and onwards, following surges in ethnic cleansing in Myanmar. The numbers vary on how many Rohingya refugees have found a home in India, but a recent estimation settles on 40,000 people.

In India’s case, the demand for habitable and fire-resistant refugee camps is muddied by the country’s own host of problems. In a socio-political sense, the Rohingyas in India exist in a painfully complicated nexus of rising Islamophobia, a strong tide of Hindu nationalism, anti-immigrant sentiment, and India’s non-existent refugee laws. Such disarray places hundreds of Rohingyas and the matter of their refoulement solely in India’s bilateral relations with Myanmar. Amidst such confusion, the routine and yet mysterious fires that raze Rohingya camps to the ground become an added element of concern.

It would not be much of a leap to assume that most fires are arson. However, authorities differ.

According to official reports, of the 12 recorded fires, five were a result of a faulty circuit, and seven have unknown causes. That is, all fires whose causes are known are said to have started due to short circuits. Upon entering an average refugee home in New Delhi’s Kalindi Kunj, one of the better-off camps, it is evident why bad urban planning is an easy scapegoat. All houses have open stoves with no gas cylinder covering and are often kept in one corner of the tent, extremely close to the flammable cotton and plastic sheet walls. Aside from cooking, all electricity comes through naked wires that coil around the tent and lay in the open. This collection of shanties made of bamboo, tarp, and cloth are home to nearly 200-250 people. When asked about the police reports citing short circuits as the primary cause, Mehreen*, a Rohingya refugee who is a mother of three and works as a ragpicker, said, “Mostly, it is people [who set fires]. Maybe a few times, it could be a short circuit.” The four other interviewees agreed with Mehreen’s views. All interviewees mentioned that bad urban planning exacerbated fires, but rarely ever caused them.

Consequently, an attentive analysis of the 12 fires reveals that only two were a result of a short circuit, five were most likely a result of “motivated arson”, and seven had unknown causes. Simply put, arson is responsible for more fires in refugee camps than bad urban planning. Unsurprisingly, all five respondents mentioned that anti-refugee groups were frequently responsible for fires.

Najia, Mehreen’s 15-year-old daughter, also recalled that some state government officials had threatened the refugees to leave six to seven days before a fire in June 2021. “Since they do it so often, people overlooked it, but then the fire happened.”

The first hint that the fires are deliberate is that eight of the dozen fires began mysteriously in the night. The second indicator of arson is the inconsistency between the authorities’ investigation and refugee account of the fires.

Perhaps, the most flagrant example occurred in 2018 in New Delhi’s Kalindi Kunj fire. The flame began at 3:00 am, ravaging 230 homes for which officials faulted a short circuit in a nearby toilet.

However, on the day of the fire, Manish Chandela, a BJP youth wing leader, had tweeted, “Yes, we did it and we do again #ROHINGYA QUIT INDIA. […] Well done by our heroes. Yes, we burnt the houses of Rohingya terrorists.”

Furthermore, Samarth, a member of the NGO providing relief post-fire, revealed during our interview that the camp’s bathrooms at the time were “toilets on wheels and didn’t require electricity”, thereby debunking the short circuit claim.

Several refugees also thought that the arsonists were using fires as a tool of slum eviction.

Ayan, founder of a human rights initiative for Rohingya and a refugee himself, cited the case of the June 2021 fire where refugees were not allowed to resettle on that plot where their shanties had burnt only hours earlier.

Mehreen added, “A few times the owner of the property asked us to leave. But it was lockdown. How would we leave? We’re not even legally allowed to leave. Then they came quietly during the night and set our settlements on fire.”

Mohsin, the community head in the camp, said that the camp residents had faced threats of eviction in the form of the authorities trashing tents, toilets and kitchen gardens.

When asked if these threats and subsequent fires are ever adequately investigated, all interviewed said, “No.” Not only did the authorities in charge rarely come, but when they did, they too asked the refugees to vacate the land. Today, the Rohingya refugees in India live on their own resilience and aid from NGOs and civil society.

During a discussion about reconstruction post-fire, the refugees described how they built houses of tarp and cloth on the basic edifice that charities provided them. Compared to his previous shanty, Mohsin now lives in an even more crowded place where “everything is flammable”.

Najia added, “at least our house earlier was made of plywood. Now it’s just cloth”. She noted that wiring in the new camp was more dangerous than the previous camp’s.

It’s evident from discussion with the refugees that their new homes built post-fire are more prone to go up in flames than their last one.

With India’s continually rising Hindu nationalism and refugee homes becoming less safe with every blaze, there is no relief in sight for refugees from arson. Mohsin mentions the protocol he has established with his two adolescent sons in case of another fire: “Whatever is there, leave everything. Save your life. Even if I’m not there.”

*Names of all the respondents have been changed to protect their identity.

Riya Singh Rathore is a researcher and editor who works at SPRF India on gender and security.