Wives of Army men have claimed that 42 Chetak and Cheetah helicopters have crashed between 2001 and 2014, killing around 80 officers. But the defence ministry has planned a grand show to celebrate the Chetak. 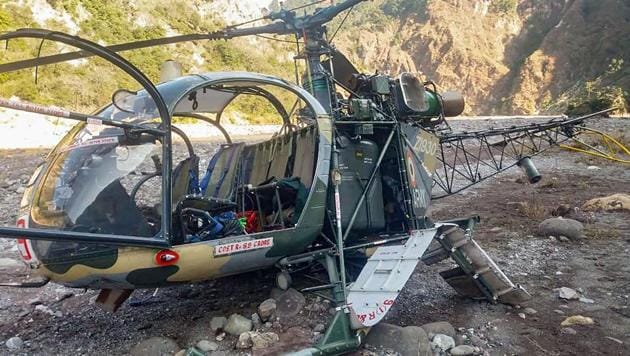 The Chetak helicopter of the Indian Army which crash landed following a technical snag, in Reasi district of Jammu and Kashmir, Monday, Feb. 3, 2020.Photo: PTI

Chandigarh: One set of individuals who will certainly not be applauding the upcoming April 2 diamond jubilee salutations commemorating the commissioning of Chetak light utility helicopters into the Indian Air Force in 1962 will be the Army Wives Agitation Group.

According to the government’s Press Information Bureau, the congratulatory event at Air Force Station Hakimpet in Hyderabad later this week, to memorialise Chetak’s induction into service six decades earlier, will be presided over by defence minister Rajnath Singh and attended by Air Chief Marshal V.R. Chaudhari and other senior serving and retired IAF officers.

“There is no reason whatsoever to celebrate the continuance in operational service of flying coffins like the Chetak helicopters, 60 years after they were first received,” said the Nasik-based wife of an AAC officer.

Both single-engine helicopters, which were licence-built by the public sector Hindustan Aeronautics Limited (HAL) since 1962 and 1977 respectively, were now ‘hopelessly obsolete’, Bhosale declared. They have turned into “widow makers” and “death traps”, she contended. She claimed that some 42 of both these helicopter types had crashed between 2001 and 2014, killing around 80 young AAC officers and leaving behind equally youthful widows, and in some instances, posthumously born children.

Furthermore, remonstrated Bhosale, despite assurances from the Ministry of Defence and the Indian Army Chief of Staff that both the outdated light utility helicopters would soon be retired and replaced by more modern and safer platforms, they not only continued to remain operational, but now were even being applauded. “We (the Group) appeal to the prime minister to end the unrelenting stress, trauma and tragedy these helicopters are continuing to generate for numerous AAC and IAF families and retire them at the soonest,” she stated. The wreckage of the Cheetah helicopter of the Army which crashed in Bareilly in 2014. Photo: PTI

Alongside the IAF, the AAC has employed the bulk of Chetak and Cheetah helicopters following its formation in late 1986. Currently it is believed to operate around 60 and 120 of the two light utility helicopters for assorted missions like transporting men and material, casualty evacuation, search and rescue, aerial survey and patrolling, off-shore and underslung operations.

Meanwhile, overwrought by the steadily mounting death toll of young AAC officers due to the outmoded helicopters they piloted, mostly in perilous mountainous terrain, the Army Wives Group came into being in 2013. Two years later, in March 2015, they met with then defence minister Manohar Parrikar and petitioned him to retire the two long-outdated light utility helicopters which incorporated technology from the late 1950s and early 1960s.

At the time, the group informed Parrikar that 191 of these helicopters had crashed, killing 294 pilots over three previous decades. They maintained that a large proportion of these fatalities had occurred in the Himalayas, where the two rotary aircraft provided a ‘lifeline’ to army formations deployed along India’s disputed borders with Pakistan and China, by effecting supply drops and casualty evacuation in normally perilous weather conditions.

Bhosale said Parrikar was ‘patient and sympathetic’ in hearing out the group’s grievances and assured them that replacing the Chetak’s and Cheetah’s was the MoD’s priority. A former Army chief too gave them similar assurances. But little or nothing had happened since, as between them the three services still operated around 187 Chetaks and some 200 Cheetahs, all of which had now become increasingly problematic to technically support, repair and overhaul.

Also read: Why the Display of IAF’s Machismo on the Balakot Strike Anniversary Was Uncalled For

“Maintenance of the Chetak and Cheetah fleet is becoming a nightmare as HAL is finding it increasingly difficult to keep it serviceable and safely airborne,” he had declared in India Strategic magazine in 2016, following which the situation had only deteriorated further.

“There is understandable disquiet on this matter within India’s military aviation fraternity which needs to be taken serious note of, as this gravely impinges on operations in high altitude areas,” the former AAC officer had warned. Ironically, the most recent accident involving an AAC Cheetah took place in early March in Kashmir’s Bandipora district, whilst evacuating an ailing soldier near the Line of Control. Its co-pilot Major Sankalp Yadav, 29, who was commissioned just seven years earlier died of his injuries in hospital in Srinagar.

“How can the government permit the use of these disastrous helicopters for medical evacuation and relief and rescue missions, when the machines themselves are disaster prone,” asked Bhosale. “How can the forces possibly assist others in these antiquated platforms when they themselves are not safe inside them?”

The first lot of two-tonne, seven-seat Alouette III’s imported from France’s Sud Aviation (at present, Airbus Defence and Space) were christened Chetak and inducted into IAF service in 1962. Thereafter, following a transfer of technology agreement with HAL, deliveries of the first batch of licence-built Chetak’s to the IAF-initially assembled from knocked-down and semi-knocked down kits-began three years later, in 1965. The Hindustan Times reported earlier this week that the last Chetak delivery to the IAF took place in early 2021, a claim that could not be independently verified as HAL officials were unavailable for comment.

Once the AAC was formed in 1986, many Chetaks were transferred to it under a complex agreement, rife with operational rivalry with the IAF, and were pressed largely into service along the Pakistani and Chinese borders. But much to the AAC’s chagrin, the IAF continued to operate the armed Chetaks in an anti-tank role, for casualty evacuation and for general diverse duties, while its lighter Cheetah’s operated Forward Area Control flights. According to HAL’s website, it had series built over 350 Chetak’s, including 85 for the Indian Navy that still operates around 60 of them.

In 1970, HAL signed another licence agreement with France’s Societe Nationale Industrielle Aerospatiale or SNIAS (later also Airbus Defence) to locally produce the five-seat, two-ton SA-315B Lama helicopters. HAL delivered the first licence-built platform, designated as Cheetah, to the IAF in 1976-77 which used it for logistics support, rescue operations and high altitude missions. Much like the Chetaks, a large number of Cheetahs – which HAL claims holds the world record in high altitude operations amongst all helicopter categories – were transferred to the AAC in 1986 which initially, as part of its founding doctrine, was disallowed from operating any rotary wing platform weighing over 5 tons.

Subsequently, when Chetak and Cheetah crashes proliferated with disturbing regularity, HAL resorted to jugaad or the Indian practice of making do, 2002 onwards, and developed the ‘stop-gap’ Cheetal light utility helicopter, that was principally a retrofitted Cheetah powered by the more powerful turbo-shaft 1,110 hp Turbomeca TM3332M2 engine, fitted with a full authority digital engine control (FADEC) system. But soon after, this too proved operationally inadequate.

Under pressure from the MoD, eager to push its Make in India initiative, the IAF took delivery of nine of 10 Cheetal’s it had ordered in 2006, but in 2018 it reportedly informed the MoD that 12 HAL-built 85-series rotor blades for the retrofitted helicopter were ‘unsuitable’ due to their ‘unusually high’ vibration levels, resulting thereby in the platforms being grounded. HAL had only recently built these seeming unsuitable rotor blades following a technology transfer from Airbus Helicopters that had stopped making them in 2012.

The IAF is also believed to have expressed concern to the MoD over HAL being down to its last few 85-series rotor blades it had earlier imported from Airbus before 2012, and warned that the enduring paucity of ‘suitable components’ could ‘adversely’ impinge on the operational efficiency of the few Cheetals it operated. It also stated that the rotor blade shortage would ‘jeopardise’ its 2015 order for 10 additional Cheetals, besides impacting 20 similar platforms ordered by the AAC in early 2013 for Rs 4.18 billion, which remained undelivered. The Cheetal programme is at present believed to be at a standstill.

Alongside this, half-hearted efforts since 2014-15 to acquire light utility helicopter alternatives – like the Russian Kamov Ka-226T ‘Hoodlum’ helicopter, following numerous other similar attempts earlier which were scrapped due to allegations of wrongdoing – had come to nought. The Ka-226T deal had floundered long before US-led sanctions were invoked against Russia in February for invading Ukraine, over ‘unbridgeable differences’ like overall project cost and the quantum of technology Moscow was willing to transfer to locally construct the twin-engine helicopters, amongst other hurdles.

Alongside, HAL’s development of the indigenous light utility helicopters programme that was launched 2008, staggered forward slowly and it was only 12 years later, in February 2020 that the single engine, 3.15 tonne helicopter received its initial operational clearance from the Centre for Military Airworthiness and Certification in Bengaluru following rigorous user trials. A year later, in March 2021, HAL began the limited series production of 12 light utility helicopters, divided equally between the IAF and the AAC at its newly developed manufacturing facility at Tumakuru, 74km north of Bengaluru. HAL anticipates orders for at least 187 LUHs – 126 for the AAC and 61 for the IAF – as eventual replacements for Chetaks and Cheetahs, an endeavour likely to take over a decade, if not longer, to fructify.

In the interim, much to the disappointment of the Army Wives Agitation Group, the AAC and the IAF will continue to operate the hazardous Chetaks and Cheetahs. “In no way do we hold the services responsible for this calamity. It is up to the government to make a difference and save the lives of our young officers,” Bhosale said.