Unconfirmed accounts on social media say that nearly 40 people are being treated for minor injuries.

Anti-CAA protesters in the aftermath of alleged violence with police in Delhi on February 10. Photos: Twitter

New Delhi: Police allegedly lathicharged at hundreds of protesters, including residents of Jamia Nagar and students of Jamia Millia Islamia, after stopping them from marching towards parliament.

An India Today report which quoted doctors has claimed that as many as 10 women have been manhandled by police and are being treated.

Delhi Police unleashes brutalities on Jamia students once again. Your lathis will not be able to break our resolve to fight against CAA/NRC/NPR. #IndiaAgainstCAA_NPR_NRC pic.twitter.com/66tpHXgTiX

Unconfirmed accounts on social media say that nearly 40 people are being treated for minor injuries.

Conflicting reports, however, say that while police brandished batons, there was no actual lathicharge.

Police did use mild force to push back protesters who were constantly clashing with them and throwing water packets in their direcrion. Lathis and batons were even raised to scare off protesters but there was no lathicharge. The video has been shot by me. pic.twitter.com/vw5RZD3oUU

Sources told The Wire that some women protesters were allegedly manhandled by police.

The protesters, including Jamia alumni, were led by the Jamia Coordination Committee (JCC) and were walking in protest against the Citizenship Amendment Act (CAA) and the impending National Register of Citizens (NRC).

Police said the protesters did not have permission to march towards parliament.

There was heavy deployment of security personnel, many donning riot gear, in and around the university. The protesters began their march from Jamia’s gate 7. The police, according to PTI, had initially appealed to them to end their march.

The protesters raised slogans like ‘Kagaz nahi dikhayenge‘ (‘We will not show documents’) and ‘Jab nahin darey hum horon se toh kyun darey hum auron sey‘ (‘When we did not fear the British, then why should we fear others’).

Several women are also part of the protest. Men formed a human chain on either sides of roads as women walked ahead.

“It has been two months that we are protesting. No one from the government has come to talk to us, so we want to go to talk to them,” said Zeba Anhad, a protester, to PTI.

The CAA allows easier citizenship for Hindus, Sikhs, Buddhists, Christians, Parsis and Jains who came to India from Pakistan, Afghanistan and Bangladesh before 2015 to escape religious persecution there.

Delhi also saw another large rally take place at its heart. This rally, too, did not have permission, police told PTI. It comprised students and civil society members, who poured onto the streets in central Delhi against the same issues as those in the Jamia march did.

The protesters, carrying placards and banners of all sizes and colours, converged at Mandi House around 11 am and started marching towards Jantar Mantar where they reached around 12.30 pm via Barakhamba Road and Tolstoy Road.

A large number of police and paramilitary personnel walked along with them. 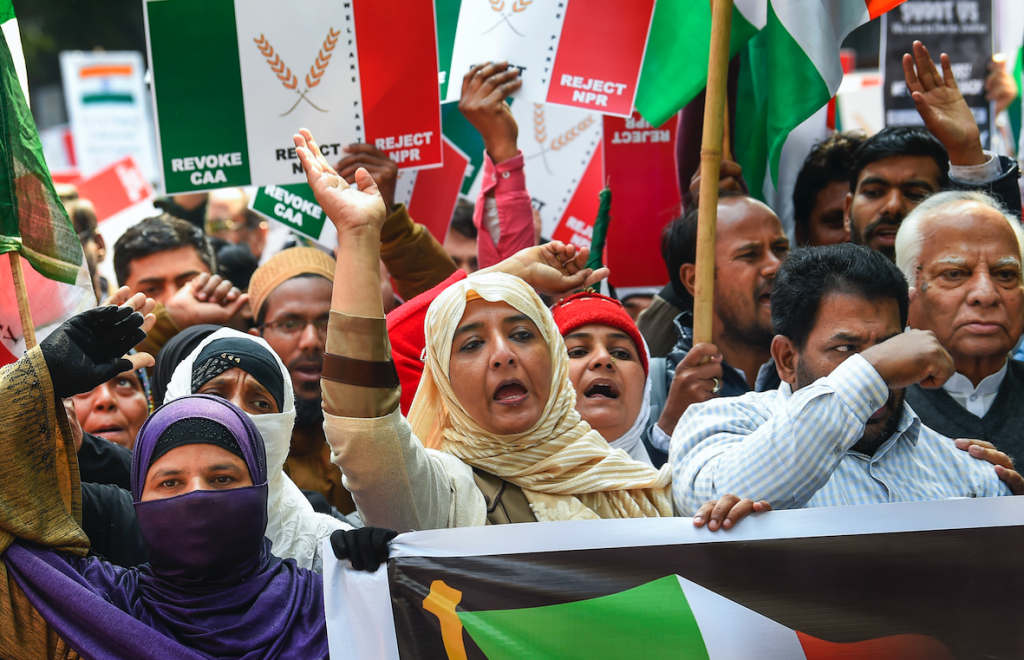 The protest from Mandi House to Jantar Mantar, against the CAA, on February 10. Photo: PTI

“The protesters do not have permission to take out a march, but as long as they maintain peace, we do not have a problem,” a police official said.

The protest call was given by the Welfare Party of India. The protesters, however, claimed that they had the permission and would march till Jantar Mantar.

Mohammad Shareef, who came here from Kanpur, said his son Mohammad Rais (30) was shot dead by police when while returning after offering namaz.

“On December 20, Rais was returning home after offering namaz. He used to sell ‘papad’ and also worked in marriage functions. During the commotion, Rais started running when the police shot him.

“The people from the locality took him to my house and I rushed him to a hospital. Not even a single person came to my house and asked how we were. Police misbehaved with us. Rais was killed by police when he was returning home after taking his money which he earned at the marriage function,” said Shareef.

The protesters carried the photographs of freedom fighters Bhagat Singh and Chandra Shekhar Aazad and social reformer Savitribai Phule, and demanded that the government revoke the “black law”.