For the First Time Since Independence, Muslims Have Emerged on to the Streets

The protests have been marked by Muslims reclaiming India’s national icons and symbols. 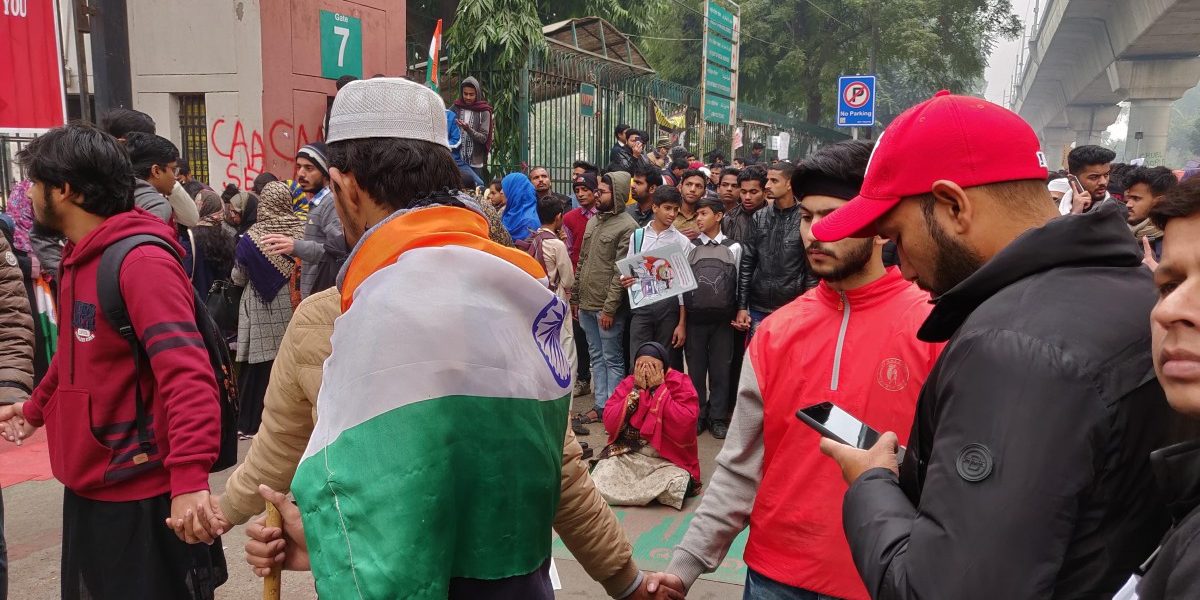 A human chain formed by protesters at Jamia until the last of the worshippers has finished namaz. Photo: Nizam Pasha

Ironically, the unholy trinity of the National Register of Citizens-Citizenship (Amendment) Act-National Population Register, designed to place a question mark on the citizenship of Muslims in India, has had the unintended consequence of reaffirming their Indian identity.

Despite having chosen to stay in India after independence, weathering the rising tide of communalism that Partition brought, Muslims in India have constantly had their patriotism questioned. Most Muslim leaders that the freedom struggle had produced left for Pakistan, and it is safe to say that since independence, Muslims have had no leader with a pan-India appeal.

As per the report of the Sachar Committee, the participation of Muslims in all fields of public life, including their numbers in the armed forces, the police, bureaucracy, educational institutions and even organised private sector employment is disproportionately low, lower even than the Scheduled Castes and at par or lower than the Schedules Tribes.

With the rise of the political right, increasingly, the public discourse of “nationalism” was coopted by jingoism, toxic masculinity and communalism. Every bigot started referring to her/himself as a “nationalist”. At every step, Muslims were accused of being anti-national or pro-Pakistan and told to go to Pakistan. All individuals, associations and collectives subscribing to liberal values were put in the box as not being patriotic enough or being soft on terrorists, separatists, infiltrators and sundry anti-nationals, most of which were synonyms for Muslims. 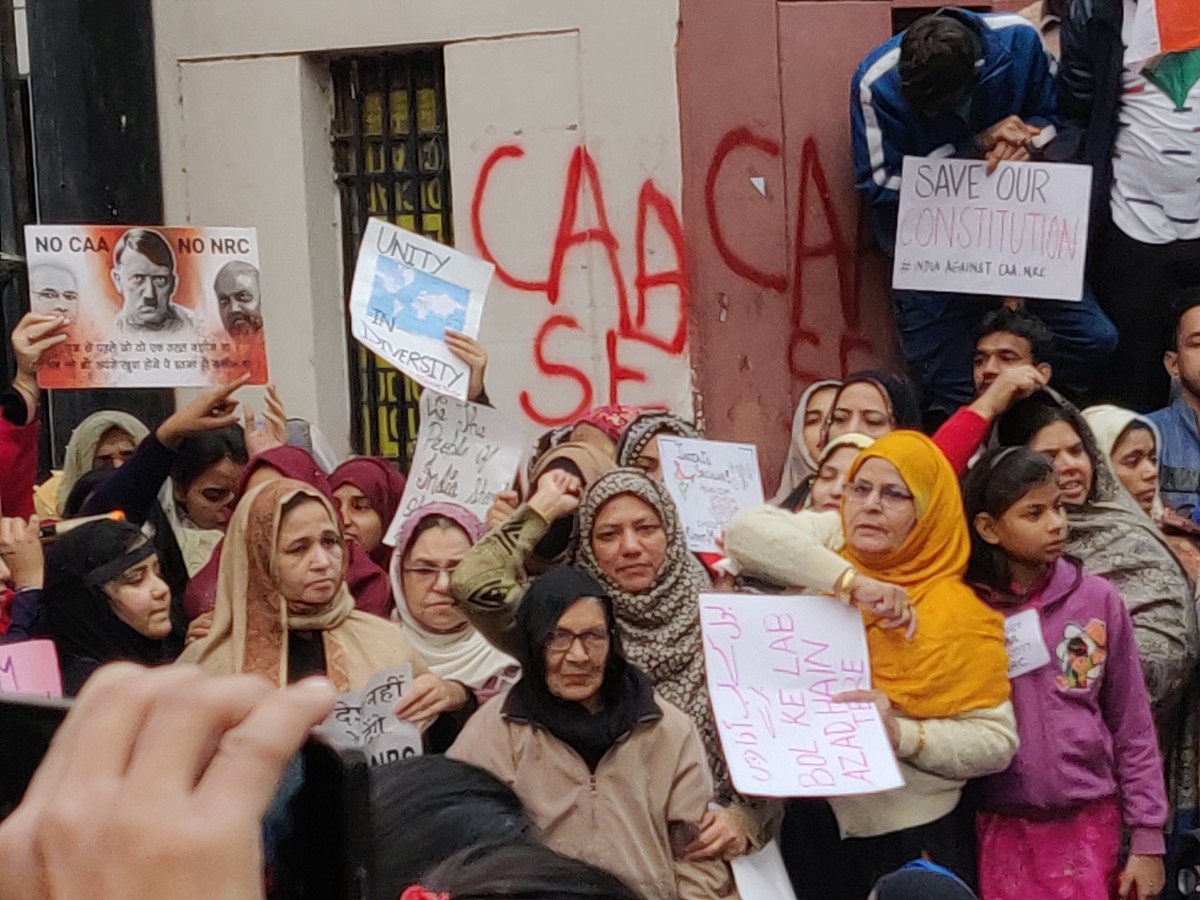 Symbols are always vulnerable to appropriation and the tricolour became synonymous with the neo-nationalists, who were carrying it to their rallies and literally wearing it on their sleeves. The image of the tricolour flying in the protest march in Jammu taken out in support of the accused being tried for the brutal rape and murder of an eight-year-old Muslim girl in Kathua was seared into public memory.

Lynchings in the name of cow slaughter, extra-judicial killings, absurd laws criminalising forms of divorce already rendered ineffective by the Supreme Court, five acres of land given to compensate the irreparable damage to the secular fabric of the nation caused by the illegal demolition of a 464-year-old mosque, revocation of Article 370 and the ensuing clampdown in Kashmir – none of these was able to awaken the Indian Muslim and force them to leave the safety of their homes to venture onto streets that felt increasingly hostile and alien.

And then, the government went a little too far and passed a series of laws, the net effect of which is to require Muslims to prove their citizenship or face prosecution, providing all other communities a safe passage. The rest, as they say, is history. Finally, the knife had cut too close to the bone.

The protests began in Jamia Millia Islamia and quickly spread to Aligarh Muslim University and then to the rest of the country. The fact that the protests started in Jamia is also apt and in keeping with its historic tradition. Jamia Millia Islamia was founded by Muslim leaders who felt that AMU was too colonial in its outlook and Muslims should come forward and be equal participants in the freedom movement. These leaders broke away from AMU and Jamia was founded as a centre of the Non-Cooperation and Khilafat movements, with Mahatma Gandhi as its patron. Gandhiji once pledged that if need be, he would go around with a begging bowl to fund the fledgling university.

The words of the “Aligarh ka tarana” or the anthem of the Aligarh Muslim University written by Majaz Lukhnawi have proved strangely prophetic in describing the role of Jamia and AMU in the anti-NRC-CAA-NPR protests:

(The cloud (of revolution) rising up from here will rain down on the whole world).”

The intention here is not to communalise and colour what is quintessentially a pan-India people’s movement as a Muslim movement. It is only to emphasise that for the first time since independence, Muslims have emerged on to the streets to raise their voice and claim an equal share in the political discourse of their country.

It is true that protests do not win elections. Let us even assume for a moment that the majority of the people are still behind Modi and back the discriminatory law. But for the first time since the Modi-Shah combine came to power, there is nationwide opposition to their discriminatory and divisive policies and rhetoric. And this opposition is not by any political party or individual. It is by the people themselves.

The protests are notable for their spontaneity and lack of leadership. Student leaders, stars of popular culture, local and regional icons are seen floating from one protest to another, trying to find their own role in what is in the truest sense a people’s movement. The common Muslim man and woman have decided to wait no longer for this political party or that, this leader or that, to voice their concerns. Nor are they lamenting the lack of national leadership in their community.

Men and women, old and young, have taken to the streets and decided to speak for themselves. Unlike the #Notinmyname protests of 2017 to protest the lynching of Muslims in the name of gau raksha (cow protection), where persons of all other communities came together (on a much smaller scale) to say that they do not want atrocities against Muslims to be perpetrated on the pretext of protection of Hinduism, this time Muslims are not merely the object of the protest, they are leading the movement from the front. 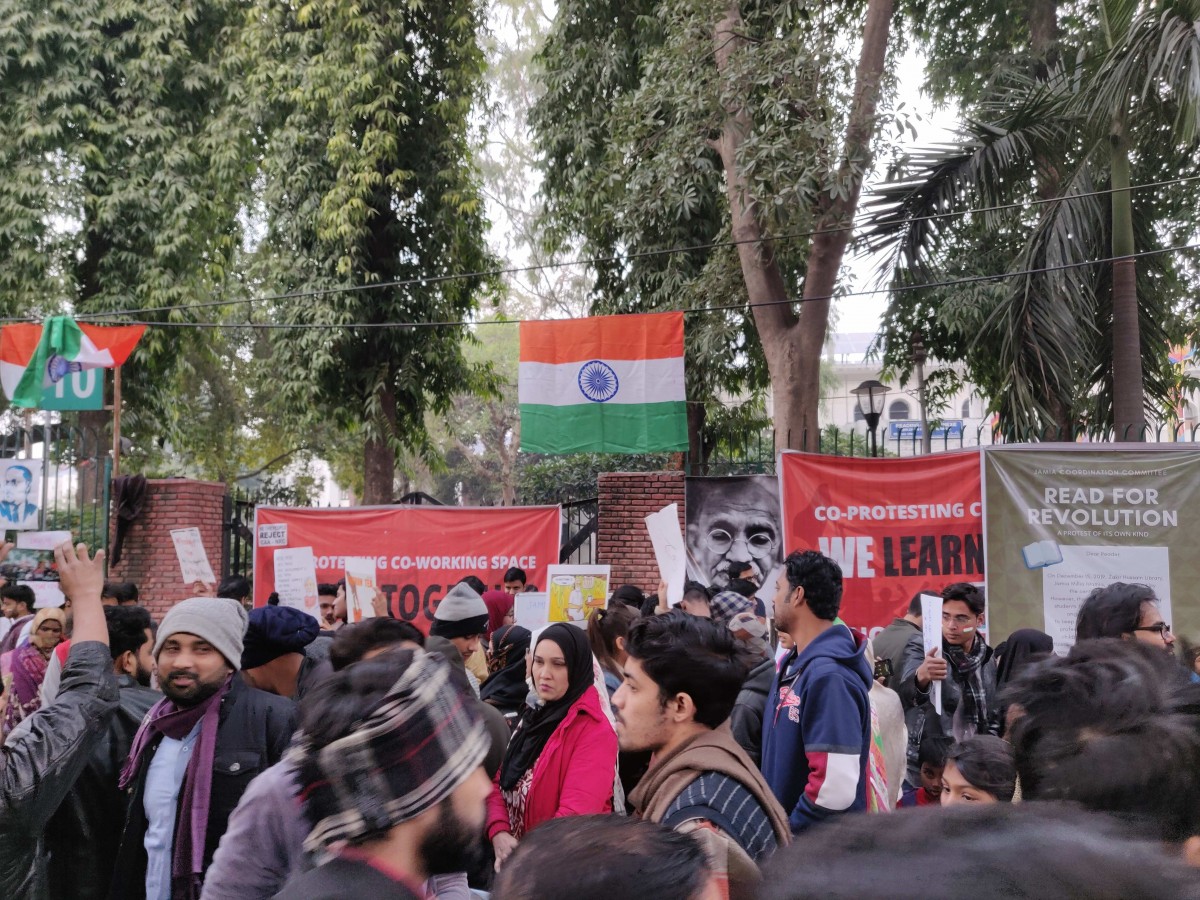 A proliferation of the tricolour at Jamia and photos of Ambedkar and Gandhi forming the centrepiece of the resistance. Photo: Nizam Pasha

The protests have been marked by Muslims reclaiming India’s national icons and symbols. Men wearing skullcaps and women wearing hijabs waving the tricolour or even with the tricolour painted on their faces have taken over the streets and protest venues in practically every city in the country. Muslims no longer feel constrained to restrict themselves to pictures of Maulana Azad and Zakir Hussain to rally around. They are reclaiming national leaders as their own, as people who fought for their freedom, the freedom that is sought to be taken away today.

Mahatma Gandhi, who we hear about these days only when his assassin is glorified, is once again a symbol of resistance. Dr B.R. Ambedkar once again belongs to ‘We The People’ he gave the constitution to and is not the reserve of one political party in Uttar Pradesh. Alongside these, as Hasrat Mohani’s “Inquilab Zindabad”, Bismil Azimabadi’s “Sarfaroshi ki tamanna” and Faiz Ahmed Faiz’s “Hum dekhenge” become rallying cries once again, it is also a reminder that Muslims of the sub-continent are no strangers to the fight for civil liberties.

In fact, so perplexed and clueless is the establishment by the uprising that they have started resorting to absurdities like ordering an enquiry into whether Faiz’s “Hum dekhenge” is anti-Hindu in its reference to idol breaking. Perhaps the director of IIT Kanpur would do well to look up the meaning of the word ‘iconoclast’, which literally means breaker of idols but has come to mean someone who attacks entrenched institutions and ideas, and note that Ambedkar has been described by the famous former Supreme Court judge, Justice V.R. Krishna Iyer, as a “creative iconoclast”. Perhaps Justice Krishna Iyer was referring to something other than desecration of idols. As was Faiz.

Simultaneously with the reclaiming of national symbols and icons, there is a reaffirmation of their Muslim identity by the Muslim protesters. Protests are paused for namaz, and non-Muslims protestors form human chains around the people offering prayers. Duas (prayers) for a roll-back of the discriminatory law are being conducted after namaz in mosques. Rozas (fasts) have been observed in various places as a statement of solidarity with the fight against NRC-CAA-NPR and community iftars are being organised.

In Jamia, Shaheen Bagh and surrounding Muslim areas, a whole culture and routine has emerged around the protests. Over the course of the three odd weeks that the protests have continued, the number of women participating has increased steadily. The age demographic has also changed, from a student movement to a movement of persons of all ages from all walks of life. School children are seen waving anti-CAA banners from school buses, grandmothers are coming to protests in wheelchairs and raising slogans. 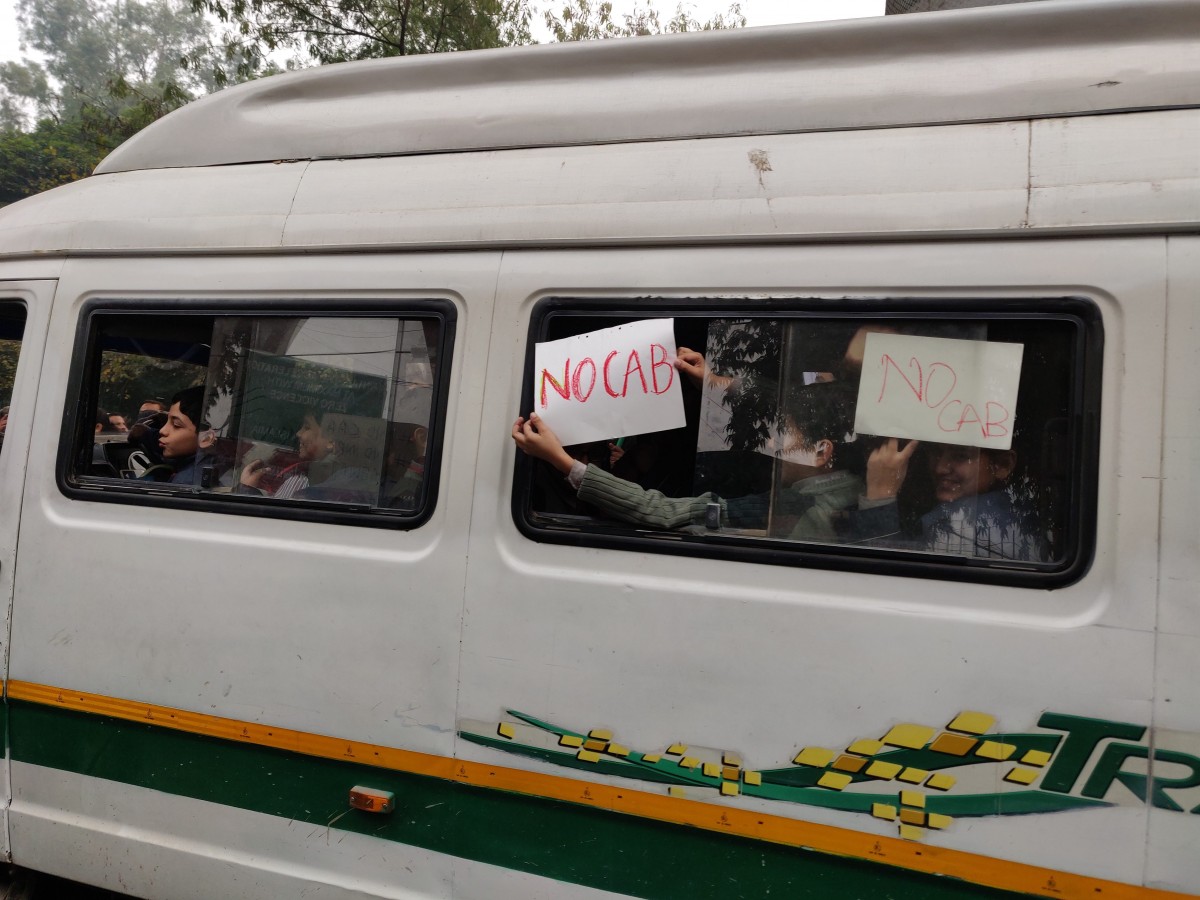 As the number of headscarves at protest venues has multiplied, the protests venues have responded by becoming more gender sensitive. One of the two mosques on campus in Jamia has been converted into a mosque reserved exclusively for women; and its washrooms have been set aside for their use. In Shaheen Bagh, a shamiana has been erected in the middle of the road with carpets for seating to provide some barrier against the biting cold to the women who have been sitting on dharna day and night, some of them with their children. For a community that is often accused of gender inequality, these are welcome signs that the churn is not just outside but also within.

It is a little-known fact that Allama Iqbal actually wrote two taranas. One, which we know so well – “Saare jahan se achcha Hindustan hamara” to imbue a national identity and sense of pride among the people of India, and the other lesser known one – “Cheen-o-Arab hamara Hindustan hamara, Muslim hein hum watan hai saara jahana hamara” to engender a global Muslim identity and emphasise the stake Muslims have in India. It seems today that Indian Muslims have fused together the two to raise a new slogan – “Muslim hein hum watan hai Hindustan hamara”.

Nizam Pasha is a lawyer practicing in the Supreme Court. He can be reached on Twitter @MNizamPasha.