New Delhi: A large number of anganwadi workers of Delhi, who are at the forefront of the fight against the COVID-19 pandemic, on Tuesday held a protest demonstration near the Delhi secretarial to demand payment of adequate honorarium and release of arrears and facilities related to health, provident fund, pension and social security.

They also urged the Aam Aadmi Party government in Delhi to ensure that MLAs do not “harass or exploit” them by engaging them in election campaigns. Incidentally, 63 of the 70 MLAs in the Delhi assembly belong to AAP, while the remaining are from the BJP.

The protest witnessed the participation of thousands of anganwadi workers who report to the Women and Child Development Department and are responsible for important jobs such as assisting doctors in immunisation campaigns, creating awareness related to reproduction, providing drugs and medicines kit to the needy, keeping records of immunisation programmes and the people involved, reporting cases of diseases, creating awareness about hygiene and diseases and conducting pre-school activities.

Talking to The Wire, Vrishali of Delhi State Anganwadi Workers and Helpers Union said that despite the anganwadi workers – all of whom are women – performing crucial roles, they are neither paid on time nor provided the facilities and perks they deserve. In all, she said, there are around 22,000 anganwadi and health workers in Delhi.

She said the anganwadi caregivers in Delhi have not been paid their full honorarium for nearly 10 months. “So, one we are demanding the payment of those arrears.”

“Also, on September 11, 2018,” Vrishali said, “Prime Minister Narendra Modi in an online meeting said there would be an increment in the honorarium of ASHA and anganwadi workers. But while nearly three years have passed since, the revised rates have still not been implemented.”

The social activist said that the workload of anganwadi and ASHA workers is constantly increasing. “The Delhi government is running the Saheli Samanvay Kendra (Saheli Coordination Centre) and the Union government under its New Education Policy wants to involve us too. So it is trying to put the burden of primary schooling also on the shoulders of anganwadi workers,” she said.

“What we are saying is that we should be paid on the basis of the quantum of our work. So, give us the status of a ‘karamchari’ (regular worker), we have no problem in working hard,” Vrishali said.

She said that during the pandemic, anganwadi workers have performed crucial tasks at the ground level, ranging from distributing food items and nutrition support, to doing screening and conducting surveys. “But if any of the workers contract COVID-19, the department was not liable to even foot the medical bills,” she said.

Another major demand, Vrishali said, pertained to interference by the MLAs in the functioning of the anganwadi workers. “They interfere in the functioning of anganwadi centres. We are not employed by the MLAs. We are volunteers of the Women and Child Development Department and so we are not answerable to these legislators. Then how are these MLAs being allowed to interfere so much with our work, to carry out our inspections – if at all it should happen, the Department should do it.”

She said in other parts of the country, there is no such interference by MLAs. Vrishali charged that these MLAs are harassing them because the Municipal Corporation of Delhi elections are due next year. “They are trying to reach out to the beneficiaries of the anganwadi schemes through the workers. Our scheme comes under both the Union and state government and so we are not affiliated to any political party,” the activist said. 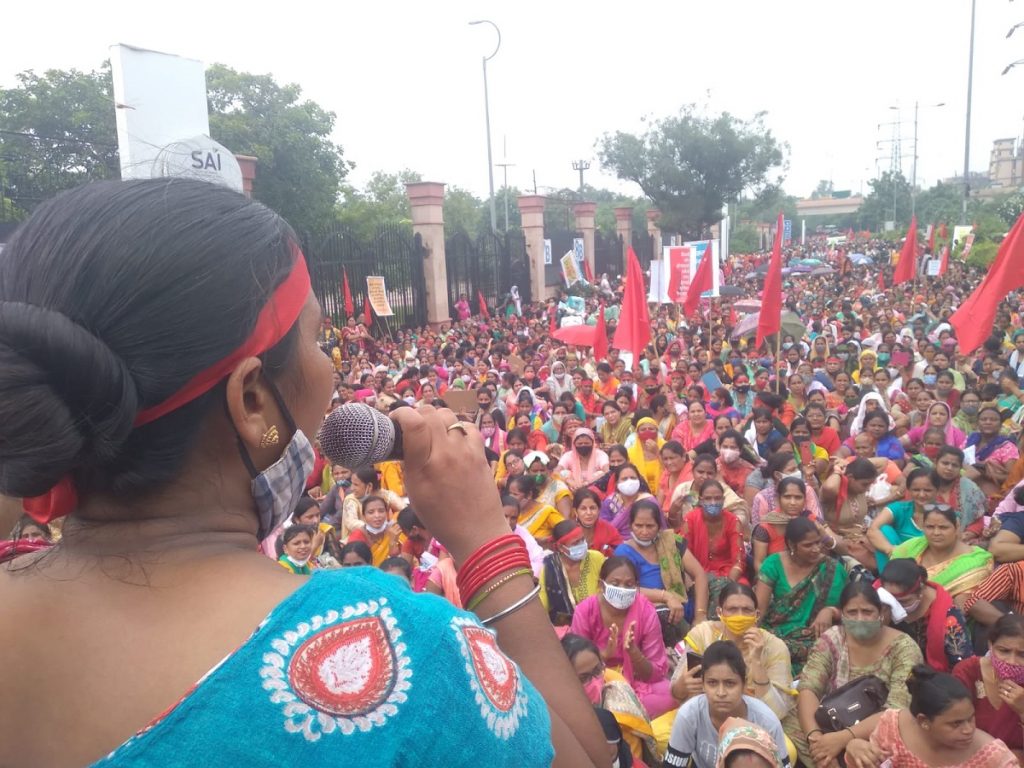 The anganwadi workers’ union has overall raised 22 demands before the Delhi government. It has demanded that the policy of opening “Saheli Coordination Center” and the decisions of New Education Policy, 2020 should be withdrawn by the Delhi and Union government since these policies compel anganwadi workers to do forced labour. “The decision to extend the working days of anganwadi women workers without additional pay should also be withdrawn immediately,” she said.

In view of the rising inflation, the union also demanded that the government should increase the honorarium with immediate effect and ensure an honorarium of Rs 18,000 and Rs 12,000 for the worker and assistant respectively.

It also urged that all anganwadi workers and helpers should be given the status of government employees and we should be regularised and brought under the framework of labour laws so that we can get a sure guarantee of employment.

Also, it said, all anganwadi workers and helpers should be provided facilities like ESI, PF and pension and extended social security cards.

It also called for an immediate stop to “infiltration and interference of non-governmental organisations (NGOs) in the Integrated Child Development Project” and the inspection by NGOs of anganwadi centres.

Also, the union has demanded that “the misbehavior of the block coordinators should be checked; instead of distributing take home ration (THR) door-to-door, the old system of nutritional allocation should be restored; proper security arrangements should be made for the women workers working during the COVID-19 epidemic and the responsibility of proper treatment should be taken by the department, in case, they get infected’ and any kind of privatisation should be banned in the ‘Integrated Child Development Project’.”