The absence of tenancy records or land documents is preventing families from obtaining the compensation they are entitled to. 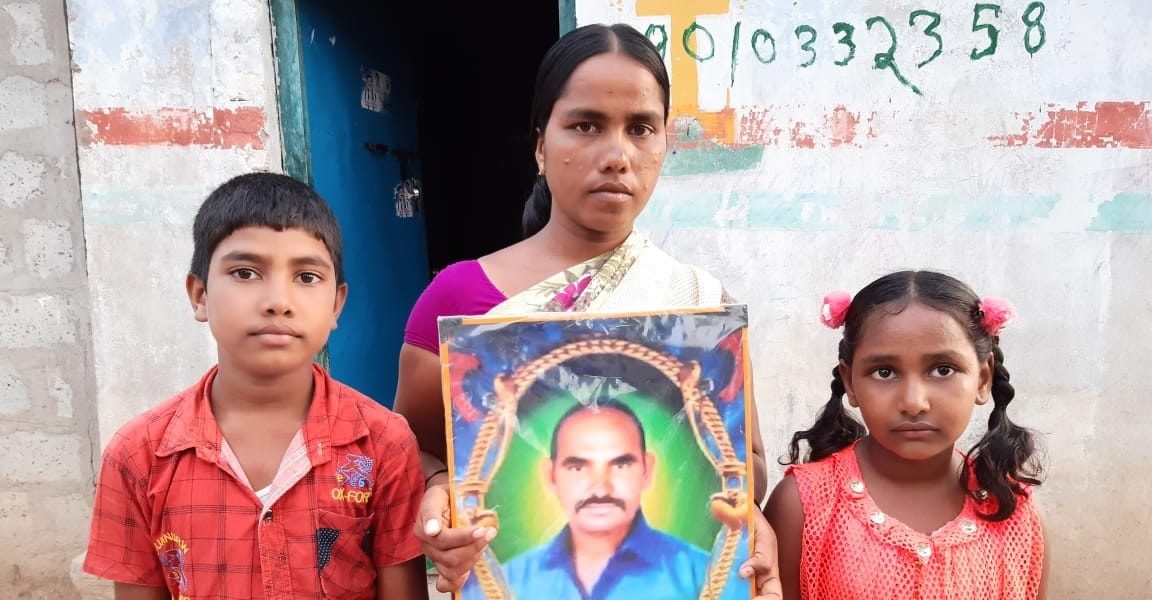 J. Yesumani of Guntur district says she is yet to receive even the monthly Rs 2,000 farm widow pension. Photo: By arrangement

Living in a rented one-room shack with asbestos corrugated roofed sheets, the condition of G. Reddy Rani from Nagulabavi in Tadiguntapalli village in Chittoor district mirrors the grim situation of families hit by farm suicides. Her husband G. Rama Naidu, a tenant farmer, took his life in 2015 after he incurred a loss of Rs 4 lakhs.

“Forty days ago, I submitted all the documents along with the tenancy papers recently to the authorities in Vayalpadu. The only benefit that I am receiving is the Rs 2,000 pension given to farmers’ widows. I am eking out a living by working for daily wages and selling milk,” Reddy Rani said. 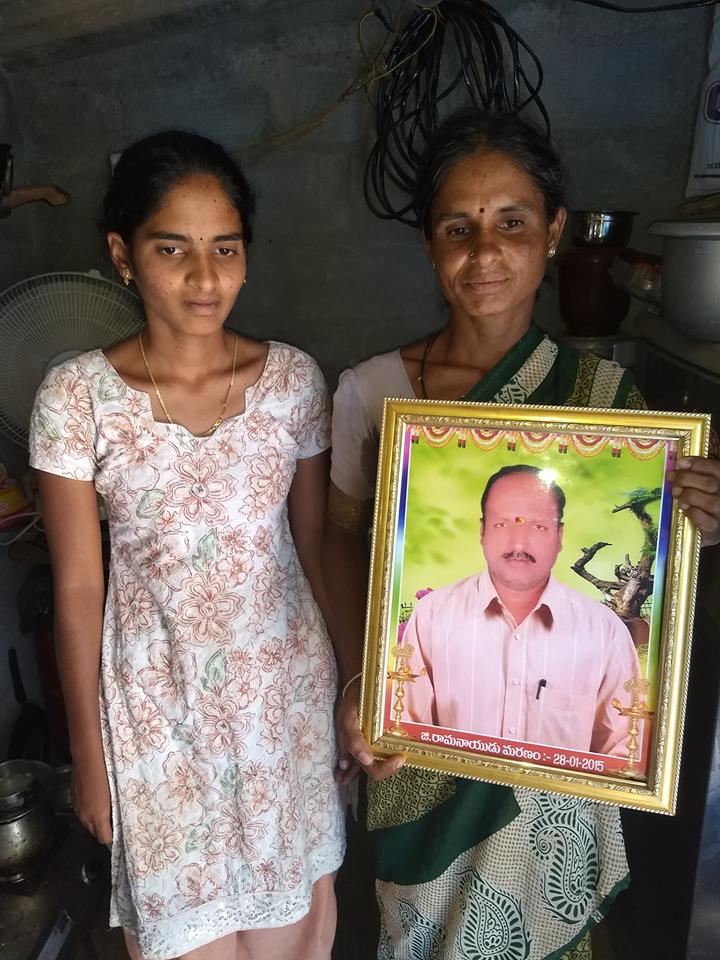 G. Reddy Rani is receiving monthly pension of Rs 2,000 meant for farm widows and is awaiting compensation. Photo: By arrangement

Their family is among the 1,513 which lost a person to farm suicides between 2014 and 2019. Data provided by the Rythu Swarjya Vedika (RSV), a farmer’s organisation, shows that only 391 families received compensation. Reacting to this, chief minister Y.S. Jaganmohan Reddy announced that all the families would be provided compensation of Rs 7 lakh.

However, the government has been rigid in sanctioning compensation. Though families of farmers who have taken their own lives are eligible for Rs 5-7 lakh compensation, the system is instead compelling them to accept just Rs 2 lakh under a different scheme, the Chandranna Bima. This is an insurance scheme that grants compensation to informal workers, in natural or accidental deaths. It was initiated by the previous Telugu Desam Party (TDP) regime and has been rechristened YSR Bima after the YSR Congress came to power.

Families of farmers who have died by suicide are being forced to take compensation under this scheme because families must “prove” the death was by suicide. Unable to do so, they accept lower compensation. Once they receive this amount, families become ineligible for further compensation.

J. Yesumani is from Ramapuram village of Pedakurapadu mandal of Guntur district. Her husband J. China Yellamanda took his life in December 2018 after falling into a debt of Rs 2 lakhs while cultivating a chilly crop in three acres. “I am yet to receive the Rs 2,000 pension given to farmers’ widows. I have three children and don’t own a house,” Yesumani said.

Activists have in the past expressed concern that compensation could also be denied based on unrelated reasons. This proved to be true for D. Venkata Lakshmamma, whose husband D. Krishnaiah ended his life after incurring a debt of Rs 3.5 lakh from banks and Rs 6 lakh from private lenders. The couple is based in Rachapalli village of Ramapuram mandal in Kadapa district. Lakshmamma was denied compensation after the police claimed that he killed himself due to family discord, not because of the debt.

Also Read: The Farm Widow: A Suicide and a Life Left Behind

D. Narasimhulu, their son, says that he took a personal loan of Rs 7 lakh to repay the debt. He works in the Indo-Tibetan Border Police (ITBP). “We have submitted all the required documents that show the debts were incurred to clear the land for cultivation and digging borewells,” he says.

Bhusamma is a farm widow who lives in Unguturu village of Amaravathi mandal in Guntur district. Her husband Bulla Peda Yesu killed himself on February 28, 2018 after falling into a debt of Rs 7 lakh. She has also not received any compensation and says her son had to discontinue his education to try and repay the debt.

“I am selling my cotton crop to those who provide me with input costs and supplementing it with labour. My other son is still studying. When I met the local MLA, we were redirected to the collector’s office. All the required documents were given during the previous regime, but are yet to get any compensation,” she says. 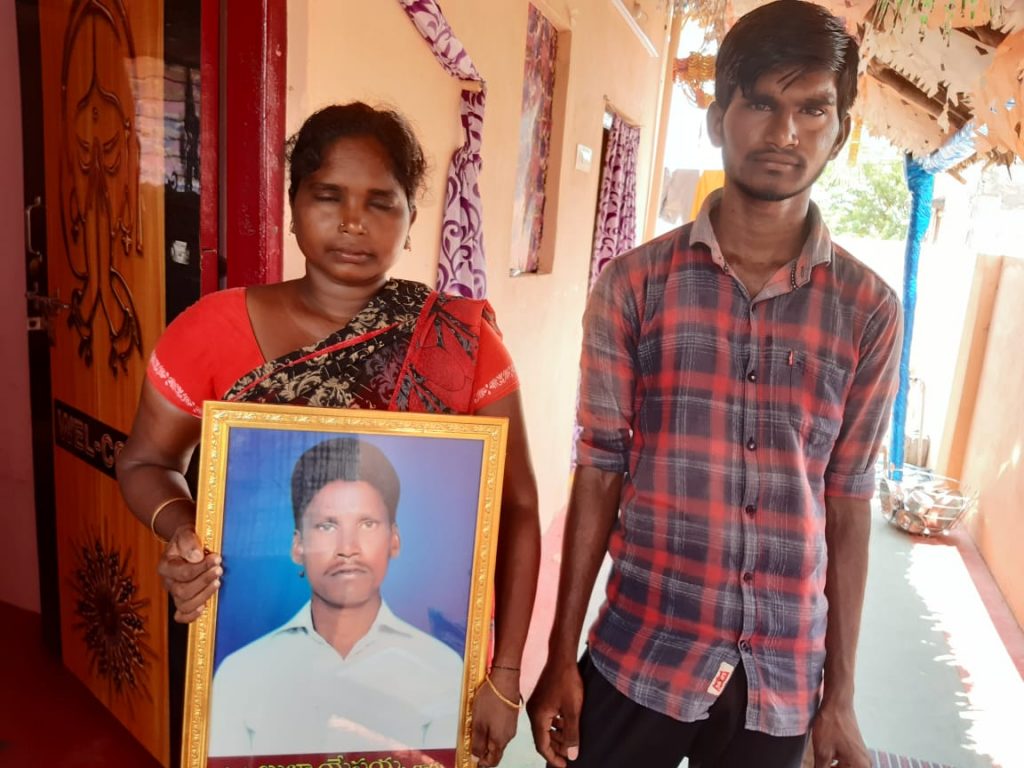 B.Bhusamma and her son. He has also taken up cultivation to repay debts. Photo: By arrangement

In the absence of a government order providing modalities to identify farm suicides, confusion reigns at the district level. The process is quite cumbersome and some 13 documents are sought, along with the FIR to decide if a death has to be classified as a farm suicide.

Activists say, given past experience, there are reasons for skepticism. B. Kondal Reddy, secretary of RSV, says that officials reject many claims during verification because farmers do not have a tenancy form or debt papers from institutional sources. “This happened under the previous regime too. Over the years, some of them could have even lost these papers,” he says.

“Private lenders avoid any record-keeping of the debt as they would then come under the purview of the Money Lenders Act. Or simply, the land could have been in the name of the father or even wife of the victim,” said Reddy. Though it is estimated that 75% of farm suicides are by tenant farmers, the difficulty to obtain tenancy documents is the biggest obstacle for getting compensation.

Activists also say that guidelines should direct authorities to determine if a death was a farmer suicide within a particular timeframe. Without this requirement, decisions are sometimes kept pending for three-four years.

Also Read: Understanding Land in the Time of Farmers’ Suicides

With the new Andhra Pradesh Crop Cultivators Act in place, activists say rules should be framed flexibly to issue tenancy cards. Kirankumar Vissa, a co-founder of RSV, says that the government should not insist on a written agreement between owner and tenant. “There should be an option for the tenant farmer to apply for a card even if the owner’s signature is not available. Otherwise, the new law will cause more difficulty for tenant farmers, though the government may have good intentions,” he said.

The AP government has issued a GO announcing ex-gratia of Rs 7 lakhs to the families of 28 farmers who were identified as having killed themselves between 2014 and 2019. M.V.S. Nagi Reddy, the vice-chairman of the AP State Agriculture Mission, says that the government is committed to providing compensation to the families of every “genuine farmer who died by suicide”.

Confusion about the number of farm suicides

After taking over power, chief minister Y.S. Jaganmohan Reddy announced that his government will compensate families of farmers who had ended their lives between 2014 and 2019. He was reacting to media reports that only 391 families of the 1,513 farmers who died by suicide received compensation of Rs 5 lakh. This is despite the FIRs recording them as farm distress related deaths.

In the absence of the National Crime Records Bureau (NCRB) data on farm suicides after 2016, RSV filed a Right to Information with the district crime bureau, which showed that 1,513 farmers died by suicide.

“The figure of 1,513 deaths is gross under-reporting by the authorities. As promised, the government should provide compensation to all the families,” says Vissa.