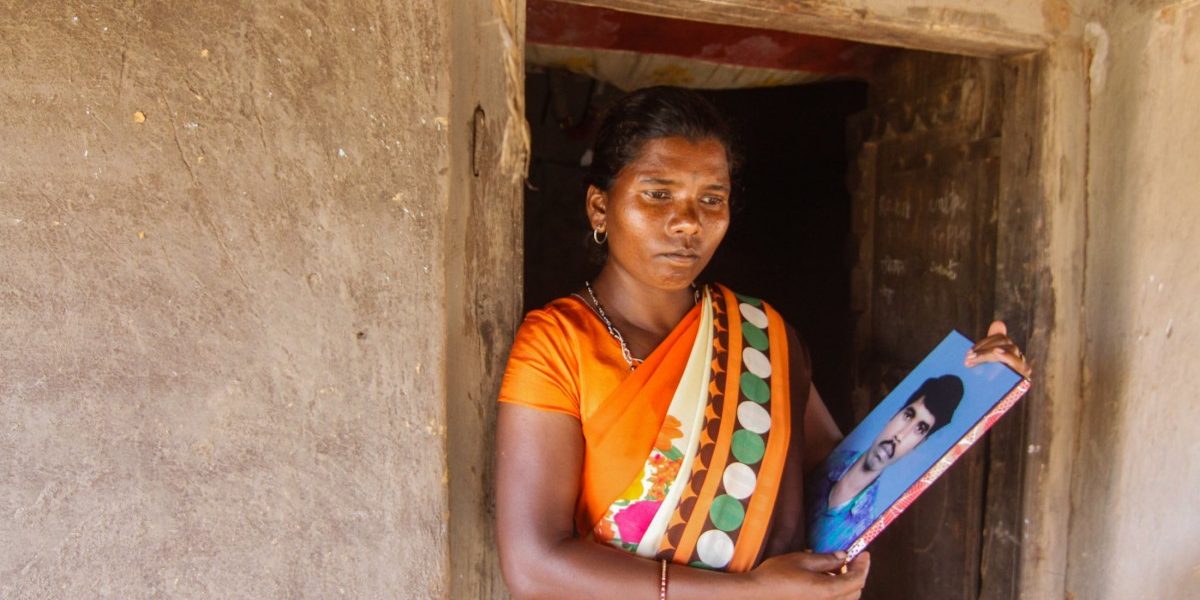 Anita Minj recently had a photo of her husband enlarged and framed for his first death anniversary.

Bargah (Jharkhand): On August 22, Anita Minj held a small, private ceremony in her home in Bargarh to remember her husband, Ramesh Minj, who died last year. He, along with a group of Oraon Adivasi villagers from Barkol in Garhwa district of Jharkhand, were attacked by self-proclaimed ‘gau rakshaks (cow protectors)’ from Barkol on August 19, 2017. Ramesh succumbed to his injuries three days later.

In her complaint to the superintendent of police, Garhwa, Anita listed 39 names, gathered from witnesses and victims, that the original police FIR didn’t contain and said, “They beat up my husband and brother-in-law, accusing them of cow slaughter, and shouted dirty casteist slurs. Some people from the crowd encouraged the violence, shouting, ‘Kill them! No one should get away alive.’”

Ramesh was alive when he was taken into police custody on August 19, 2017, with a severe injury under his knee caused by a sword. His brother-in-law, Umesh Minj, was also beaten up and in the police station with him, where they were kept all night. “In the morning, a CRPF (Central Reserve Police Force) personnel came with bandages to put on [Ramesh], but the inspector in charge stopped him,” Umesh told The Wire.

The post-mortem report says the “exact cause of death could not be ascertained”.

“Ramesh might have lived if they let the person bandage him,” said Anita, who lives in Bargarh in Bhandaria block, Garhwa district, a few kilometres away from Barkol. “The policeman’s name is Nageshwar Yadav, woh picket prabhari tha (he was in charge of the CRPF camp).” Locals refer to the CRPF camps as ‘pickets’.

Often, families of victims of state violence are dejected, believing the state and police to be too powerful, and are resigned to taking the compensation offered and keeping their rage to themselves. Then there are families who keep ‘the file’ – a sign that for them, the matter is far from over. Anita Minj is one of those: she marches to the courts every time she has to; and keeps a copy of every FIR, complaint, newspaper clipping, court order and post-mortem report. The file is a symbol of resistance, the documents are her weapons. And she will share them with anyone who is willing to help her in her struggle for justice.

“The police hadn’t put the names of some of the main people involved in their FIR, now they’ve done some after my FIR. Apne bachao ke liye FIR kiya pehle (The first FIR was filed only to try and save themselves),” said Anita.

“Who do you think should be the main accused in the attack?”

“When they were tying us up,” said Umesh, “he said, wait let me show you how to tie them up, I learned how to tie people up when I was a Naxalite.”

“When did he leave the Naxals?”

“Picket banne ke baad (After the CRPF camp was made),” Anita said immediately. 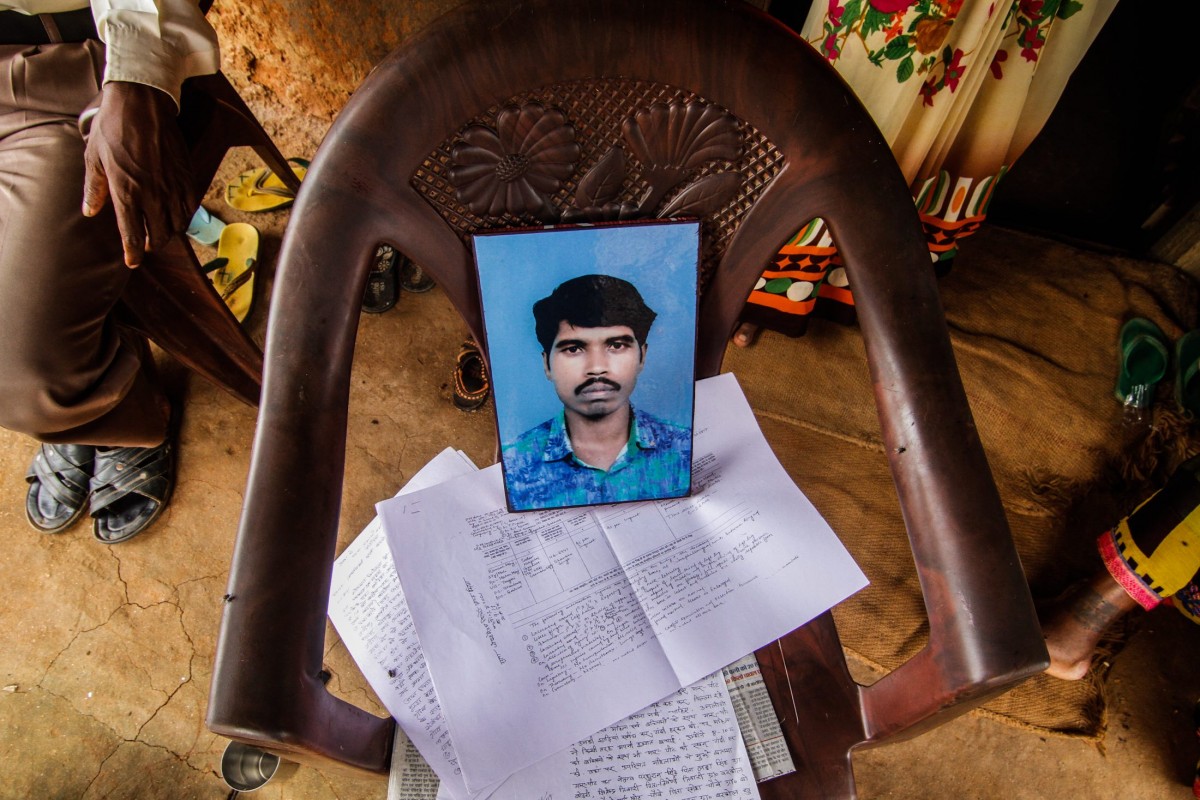 A photo of Ramesh Minj with the documents Anita is saving.

Garhwa district, part of the erstwhile Palamau district, borders Chhattisgarh’s Surguja and for decades saw the presence of Maoist Communist Center squads, before they merged with the CPI Maoist (People’s War Group) and CPI Maoist (Party Unity) in 2004. “Only the Yadavs went into the party,” is what the locals tend to say about the groups active in the area. The movement apparently dissipated around the Bhandaria block after the creation of the Barkol CRPF camp, according to the Minjs, as not much had been done to create popular support for it.

This is not to say that Maoist violence wasn’t a reality here. On June 29, 2010, the CPI-Maoist had abducted Adivasi and Congress leader Bardhan Kachhu from Barkol and killed him. In 2011, they apparently blew up a school building in Bhandaria, and on January 221 2012, 13 policemen, almost all from the Bhandaria police station, were killed in a landmine blast. Just recently, on June 26, 2018, in the Burha Pahar forest area, seven Jharkhand Jaguar personnel were killed in a landmine blast. In April this year, the Jharkhand state department was quoted as saying, “Of 38 key Maoists active in Jharkhand listed by the state home department, as many as 19 ‘work’ in Palamau.” Sandeep Yadav, one of these 28 who has a bounty of Rs 25 lakh on him, operates in the Burha Pahar area of Garhwa.

“Did you manage to speak to those attackers who you knew?” I asked Umesh.

“They didn’t give us a chance, they just kept hitting us. I knew some four-five of them. But no one would listen.”

Umesh and another group of villagers from Barkol would spend over 90 days in prison for ‘cattle slaughter’. Meanwhile, one of the main accused in the murder and assault case, Ayodhya Singh, is yet to be arrested. Other accused ‘gau rakshaks’ have been aggressively fighting for bail; a few were arrested initially and immediately granted bail, most of them are out now after the chargesheet was filed.

“The main murderer, Sundar Panna, the man who took the sword and cut Ramesh’s leg, he himself is an Adivasi, an Oraon, his name was not there in the police FIR,” alleged Anita. “One of the main accused, Ayodhya Prasad, hasn’t even been arrested till now. He was the one who rode around on his bike and got people together, wohi khus khus ke le gaya logo ko.”

When asked about the political affiliations of the killers of her husband, Anita didn’t hesitate to say, “BJP-RSS.”

“The first SP was a Muslim, but he couldn’t do much. We hoped he’d be with us, but that didn’t happen, we know he used to get calls from the higher-ups.”

When asked if the local newspapers ever wrote the names of the accused, Umesh and other supporters present in the meeting quickly said no, until Anita corrected them. She showed us a small clipping that mentions the name of some of the accused. But there wasn’t a single TV crew who came to meet here – Bargarh is a seven-eight hour journey from Ranchi, and the bus service is infrequent.

According to Anita, the violence that led to Ramesh’s death wasn’t the first time the Yadavs attacked Adivasis. Ever since the ‘picket’ had come to Barkol, which was around 2012, there has been constant harassment of Adivasis. In one incident, the Yadavs apparently poisoned the goats and sheep of the Oraon Adivasis.

“Do you think there was another reason why they attacked? Any dispute over land?”

“It wasn’t about land. Yes, they just want to finish us Christian Adivasis. Hamko badnaam karna hai (They want to discredit us). In the police station they kept abusing us, these Oraons are like this, these Christians are like this. I go to the market to buy vegetables, they say I have beef, I carry it with me, I do all of this.”

“Bihari Yadav himself threatened us indirectly, he told people when we were at court (on August 7), hamm kuch karenge, hamm inko chup chaap nahi bhetne denge (we will do something, we won’t let them sit peacefully).” 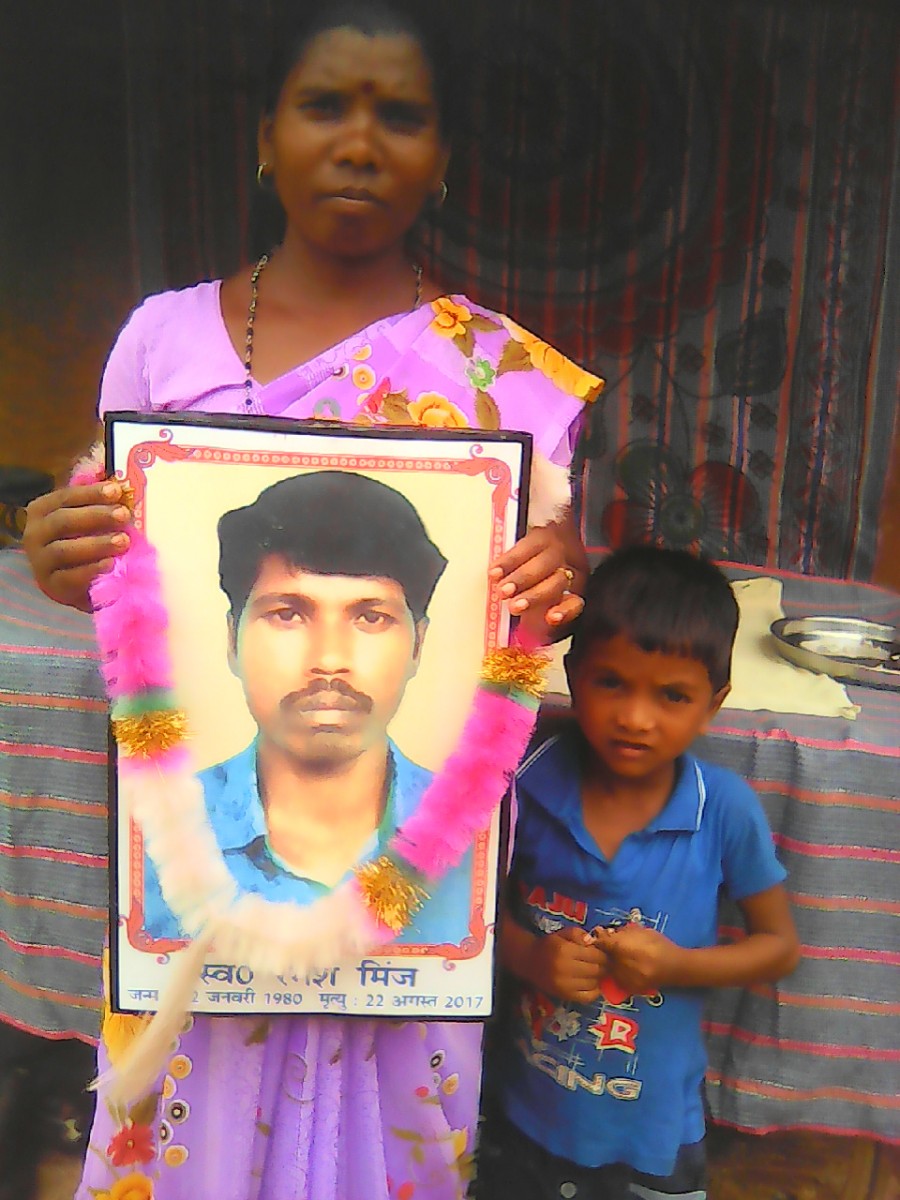 Anita and her youngest son on August 22, at the memorial meeting for her late husband.

“One of the other women who was testifying was threatened, ‘Kyun phirse marr khana hai (Why do you want to be beaten up again). I told her these are just threats, darna nahi hai, tu ghavai nahi dejeygiya toh saza kaha se aaye (we can’t get scared, if you don’t testify how will the accused be punished).”

‘Mujhe khabar aati hai (I get to hear) about what their women say, they say we have enough money, we will get out of prison.”

“Once I was returning from the market, and some Baniya or Sao boy said, ‘Hamm aur Adivasi ko marenge, abhi ek hi maare hai, aur marenge (We will kill more Adivasis, right now we have killed only one).’ I was still angry, and I hurled a lot of abuses at them. Then people in the bazaar told me not to speak like that. His mother had come, I asked her if there was an incident in her house, how would she take it? Pehle aaise nahi bolte the. Abhi khulla bolte hai. (Earlier they wouldn’t speak like this. Now they say it openly).”

Five shops in the bazaar were boycotted for the entire month of September of 2017 by all Adivasis and Christians for how they spoke to Anita.

Anita has moments in which she reveals her feelings. She speaks with a mitigated anger against the people who killed her husband, and the government that she feels hasn’t done enough. At times she gently mentions how she is alone, how there isn’t anyone supporting her legal battle. There were almost no opposition leaders who came to meet her, she said. The CPI(ML) leaders came first. Some social workers also come, but no one from the Church supports her.

“The block development officer had come, they said they’d look after my children’s education, they’d give us jobs. But they’ve never spoken about insaaf (justice).”

Anita has four children, and the youngest is five. “He saw the police bring Ramesh’s body, so he blames them. When he sees the police, he says ‘They are the ones who killed my father’, whenever we walk past the police, he asks if I am afraid, then says ‘Mere paas bandook nahi hai, nahi toh hamm bhi unko maar denge (I don’t have a gun, or else I would have killed them)’, and I scold him.”

“After the attack, the police kept coming here, so he kept saying these things.”

All photos by Javed Iqbal.