Amnesty says it recorded the details of at least 60 instances in which journalists and human rights defenders have been subjected to interrogations, criminal investigations, arbitrary arrest, detention, and surveillance since August 2019. 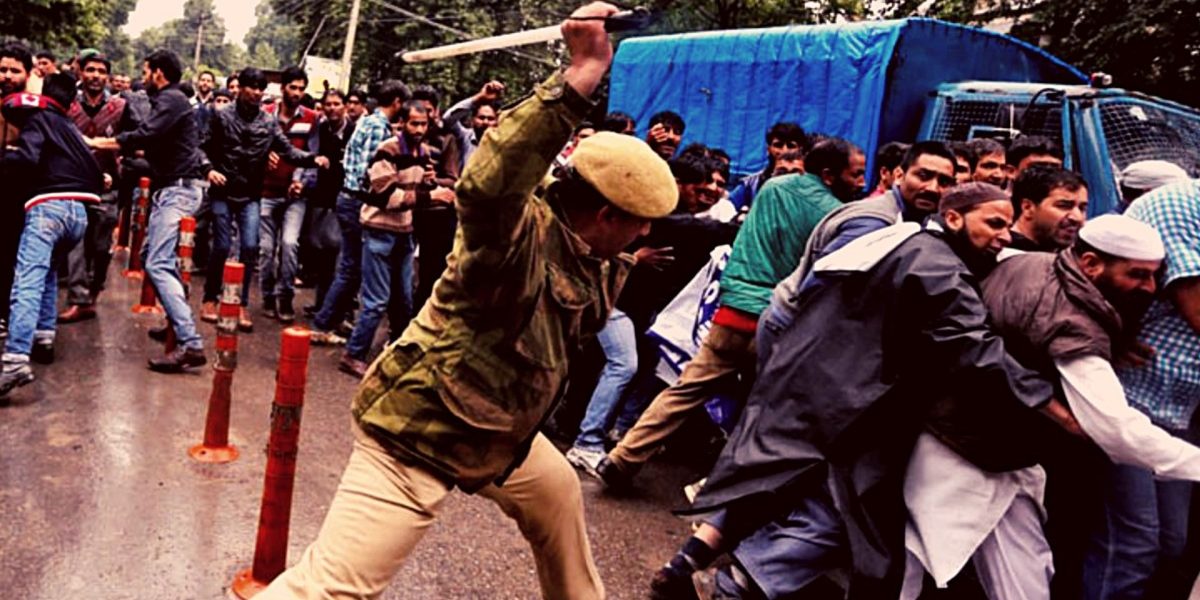 File image of a member of the security forces canning protesters in Srinagar. Photo: Reuters/File

Srinagar: Global human rights watchdog Amnesty International has released a report laying bare the scope and pattern of what it calls a “drastically intensified repression” in Jammu and Kashmir over the past three years since the Union government read down Article 370 and scrapped its statehood.

The 31-page report, whose findings are jarring, was published last week and makes a detailed documentation of the acts of alleged executive overreach and abuse of power in Kashmir where the administration has found itself in the middle of heightened international scrutiny following the Modi government’s decision to end its special status three years ago.

The report mentions that from 2019, the government has committed serious violations “including restrictions of rights to freedom of opinion and expression; to liberty and security of person; to movement; to privacy; and to remedy and access to justice.”

The report adds to the extensive body of work on the human rights situation in the former state over which a number of international rights groups, including the United Nations Human Rights Council, have shed an unflattering light.

The report is based on the correspondence that Amnesty has maintained with the representatives of civil society in J&K including journalists, lawyers, human rights defenders and a former judge, between the months of July and August earlier this year.

“Amnesty International could not access places of detention or courts in Jammu & Kashmir due to the ongoing crackdown on Amnesty International India. In that regard, in some cases, reliance on second-hand testimony or review of publicly available information was necessary. This has been triangulated with official data and other sources,” the report says.

The report reproduces very damning details of the alleged political repression in J&K. Amnesty says it recorded the details of at least 60 instances in which journalists and human rights defenders have been subjected to interrogations, criminal investigations, arbitrary arrest, detention, and surveillance since August 2019.

The report finds that J&K accounted for the highest number of extrajudicial killings known as ‘police encounters’ in the country between April 2020 and March 2022. “At the same time, unlawful killings of civilians by the armed groups have increased by 20% since the abrogation of Article 370,” it says, referring to a spate of killings perpetrated by militant groups including those of members from the minority community, police personnel and non-locals working in Kashmir.

The report describes how the Union government, while reading down Article 370, has been very selective in retaining or eschewing laws, as it attempts to choreograph an entirely new and peculiar legal framework for the former state that makes it easier to chip away at civil freedoms in the name of national security.

While controversial laws Armed Forces Special Powers Act and Public Safety Act continue to be in force, the report says, progressive statutes like a local version of the Right to Information Act, which was arguably stronger, were edged out by a watered-down versions that are operational at the national level.

“Jammu & Kashmir was a forerunner in enacting a Right to Information Act, passing its own legislation even before the Indian government passed the 2005 Act,” the report says.

Quoting an unnamed human rights activist, the report says, “Earlier, the state RTI system was functional. You would get responses to 70-80 requests if you filed 100 requests. Now you get none.”

While researching for the report, Amnesty reportedly found that only 14 of the 585 habeas corpus petitions filed this year (as of  August 4, 2022) have been disposed of by the court, underscoring the sluggish pace at which the judiciary offered remedy against the alleged abuse of power using preventive detention laws.

In the absence of any publicly available or disaggregated data on the use of administrative and pre-trial detention in J&K, the report reviewed 1,346 cases available on the website of the High Court of Jammu & Kashmir and Ladakh and found that the number of habeas corpus petitions has increased by 32% in the UT, indicating an “increase in allegations of unlawful detention.”

Citing statements by lawyers working on PSA cases, the report says that the high court takes more than a year to dispose of the habeas corpus petitions challenging detention orders under PSA in comparison to the situation before August 2019 when such pleas would be disposed of within six or seven months.

“The courts are in a way satisfying the two-year limit provided in the PSA for administrative detention. They delay in hearing the cases without giving appropriate reasons. It is unfortunate because courts were our only respite against the arbitrary detention orders passed under PSA,” the report quotes a lawyer saying.

“The analysis of the case information on the court’s website also shows an emerging trend of using (Unlawful Activities (Prevention) Act) UAPA in addition to PSA. Of 569 PSA cases, UAPA was invoked in 179 cases (31%),” the report finds, adding that there has also been a 12% increase in the use of UAPA, a stringent anti-terrorism legislation in Kashmir that guarantees 180 days of pre-trial detention.

Citing testimonies from four unidentified journalists, the report says that the Criminal Investigation Department (CID) of the Jammu & Kashmir Police, the State Investigation Agency (SIA), the Indian Army’s Military Intelligence Department and the Intelligence Bureau have been making ‘verification’ phone calls to scribes working in the valley.

“Under Section 41A of India’s Criminal Procedure Code (CrPC), the police can only summon a person by serving a written notice and only in relation to a specific case of an alleged crime if such police officer believes that arrest may not be required,” the report explains.

“However, during the interrogation, if the police officer gathers adequate information which reveals the commission of a cognizable offence, he can register a First Information Report giving an account of the offence committed by the person. But all the journalists with whom Amnesty International spoke revealed that the Jammu & Kashmir police either make phone calls without any legal basis or largely summons journalists orally, without any written communication or reasons and in relation to their reportage instead of a specific case.”

The report says a total of 27 journalists have been detained in Kashmir since august 2019.

When asked about the role of the judiciary in protecting their freedoms, one journalist tells Amnesty, “What is court? It is law and we are being punished by the law. The perpetrators are not militias,” he says.

“The law holders are using the law to punish us. We can challenge the injustice, but these violations are emanating from the law books. PSA is law. UAPA is law. FIRs are law.”