This is the first time since August 5 that any politician from Kashmir has written to the Union government seeking the release of political detainees.

“There is fear psychosis, ambiguity, and insecurity in the hearts and minds of people about their future in Jammu and Kashmir,” reads the letter.

Fayaz is a member of the Rajya Sabha. He, along with another party MP Nazir Ahmad Laway had staged a protest in parliament on August 5 and had torn a copy of the Constitution in protest against the government’s decision to read down Article 370 and bifurcate the state of Jammu and Kashmir.

“…since then (August 5) Jammu and Kashmir has seen a massive rise in presence of armed forces and severe curtailment of human rights,” Fayaz writes in the letter.

Hours before the Centre stripped J&K of its special status on August 5, the J&K administration put strict restrictions on movement in Kashmir and snapped all means of communication – internet and mobile services – fearing a backlash against the decision. 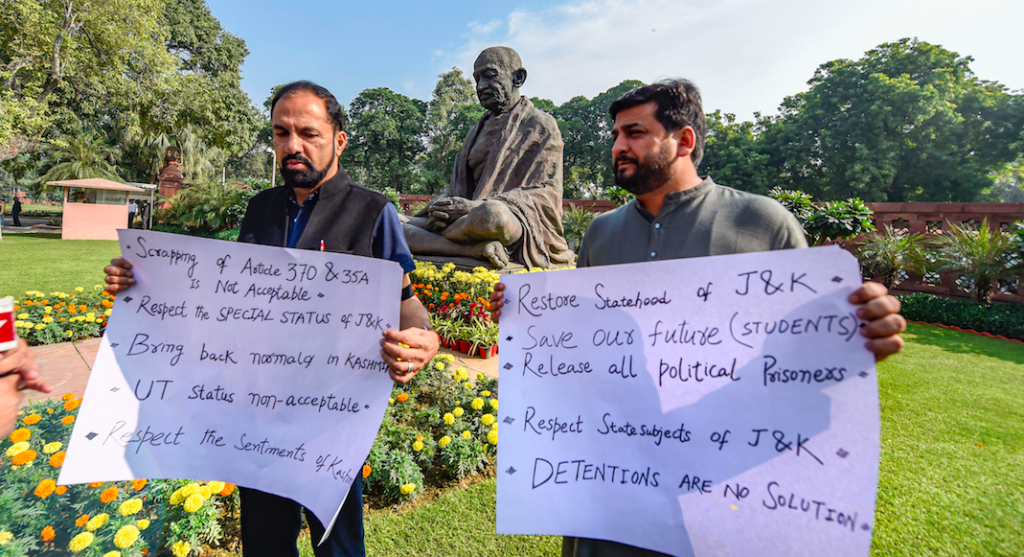 PDP MPs from Jammu and Kashmir Fayaz Ahmad Mir and Nazir Ahmad Laway display placards to protest over Jammu and Kashmir issue on the first day of the Winter Session of parliament, in New Delhi on November 18, 2019. Photo: PTI

At the same time, the Valley is facing a political vacuum as leaders of all regional parties including National Conference, PDP and Peoples Conference apart from more than 30 senior politicians are under detention.

These include three former chief ministers, Farooq Abdullah, Omar Abdullah, and Mehbooba Mufti. The senior Abdullah was last month booked under the controversial Public Safety Act and detained at his residence, at highly fortified Gupkar Road in Srinagar.

This is the first time since the Article 370 move by the Centre that any politician from Kashmir has written to the Union government seeking the release of political detainees and highlighting the uncertain situation Kashmir continues to reel under for the past 108 days.

Referring to the situation, the MP goes on to say that the PDP still believes that democracy was the most potent method to “resolve the issues and differences” that have created unrest among people of Jammu and Kashmir.

“It is fundamental that the highest authorities within the government of India reach out to people of J&K and resolve their queries about the uncertainty, leaderlessness  and the consistent lockdown they have been facing,” writes Fayaz.

Demanding release of all political leaders, the MP draws the attention of the Union home minister to the recent political furore that erupted after the incarcerated politicians were dealt with in a “humiliating and downgrading” manner during the shifting from Centaur Hotel turned jailed to their new place of imprisonment, MLA Hostel in the city center.

“They have been subjected to extremely scanty and indignant living condition in the detention,” Fayaz has written.

The PDP leader has also talked about the release of Kashmiri youth who were booked under PSA and other laws and shifted outside J&K. “They also possesses the right to legal remedies and their condition need immediate attention and they should be released and sent back,”