The 54-year-old clergyman would be produced in a magistrate court in Pala later today. 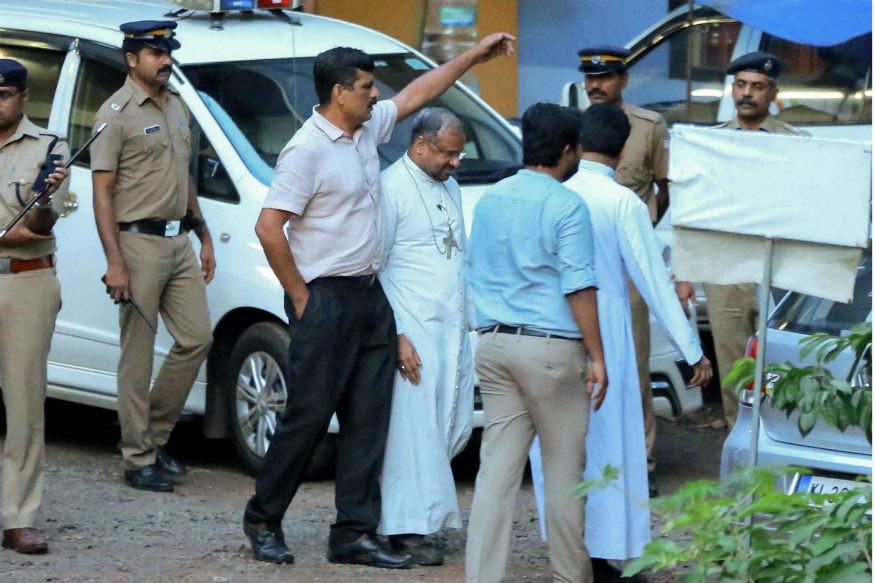 He was arrested by Kerala police after intense interrogation over the last three days.

The development came a day after the Vatican relieved him “temporarily” of all pastoral responsibilities as the bishop of the Jalandhar diocese of the Missionaries of Jesus congregation to which the alleged victim also belongs.

The nun had accused the 54-year-old clergyman of repeatedly raping and having unnatural sex with her between 2014 and 2016.

Inspector General of Police (Kochi Range) Vijay Sakhare told PTI that the arrest was recorded at 8 pm and the bishop would be produced in a magistrate court in Pala in Kottayam district Saturday.

Mulakkal, who had been coming for the interrogation in the bishop attire, was taken to Tripunithura government taluk hospital in a civil dress for medical examination and later to Kottayam.

People gathered there booed the bishop as he was being escorted out of the hospital.

There were pieces of evidence to arrive at a reasonable suspicion that the clergyman had committed the crime, he said.

During the interrogation, the accused was given reasonable time to narrate his version to the investigating team, he said.

The SP said the police will seek a three-day custody of Mulakkal. Potency test of the priest will be done, he added.

Members of various Christian reformation organisations as also the nuns of the Missionaries of Jesus, who were staging a protest close to the Kerala high court premises for the last 13 days for the bishop’s arrest, erupted with joy as the news broke.

Fr Augustine Vattoli, Convenor of the Save our Sisters (SOS) Action Council, which spearheaded the protest, called off the hunger strike.

The five nuns who were taking part in the protest welcomed the arrest of the bishop and said they would end their agitation for the time being.

They hastened to add that justice would not be done simply because of the arrest.

“Clear legal steps should also be taken to deliver justice. Law should take its correct course”, a fellow nun of the survivor nun said.

The nuns said they would continue their struggle till “complete justice” was done in the case.

They said in view of the arrest, more nuns were likely to come forward to complain against the bishop.

“More evidence is likely to come to the fore as he is arrested now. Our struggle was not only for the victimised nun. It was for seeking justice for all women victims who were crying for justice”, the nun said.

In her complaint to Kottayam police in June, the nun had alleged that Bishop Mulakkal raped her at a guest house in Kuravilangad in May 2014 and later sexually exploited her on several occasions. She said she had to approach police as the church authorities did not act on her repeated complaints against the clergyman.

Earlier this month, she wrote to the Vatican’s representative in New Delhi, alleging that the bishop was using “political and money power” to “bury” the case and seeking his removal.

The sleaze scandal got murkier when the bishop too filed a complaint against the nun, claiming he was being blackmailed by her for not extending her favours.

Outrage over the delay in the top clergyman’s arrest, meanwhile, grew. The protests by Christian reformation organisations escalated after some nuns of the religious order came out of the confines of their convent and joined the agitation.

As pressure mounted on police for action against Mulakkal, it asked him to present himself before the Special Investigation Team on September 19.

A day ahead of his scheduled appearance, Mulakkal filed an anticipatory bail petition in the Kerala high court claiming allegations against him were a “cooked up story to wreak vengeance”.

In his petition, Mulakkal said he was “absolutely innocent” and was “falsely implicated” with an “ulterior motive and vexatious intention”.

Mulakkal alleged that the nun had an illicit relationship with a relative and a complaint about it was received by her congregation.

“This crucial aspect needs to be considered along with the complaint made by her own cousin alleging the de facto complainant of having an illicit relationship with her husband.

“This crucial aspect casts serious suspicion on the credibility of the allegations raised by the de facto complainant,” Mulakkal said in his plea before the high court, which was to hear it on September 25.

Citing convention, some legal experts had said the bishop was unlikely to be arrested as his pre-arrest bail plea was pending before the high court. However, since there was no legal bar on his arrest during the pendency of the petition, the police went ahead and detained him.