Akhil Gogoi Could Be Arrested Again, This Time in a New Case

Dibrugarh police is waiting in front of Sivasagar jail to arrest him, his lawyer told The Wire. 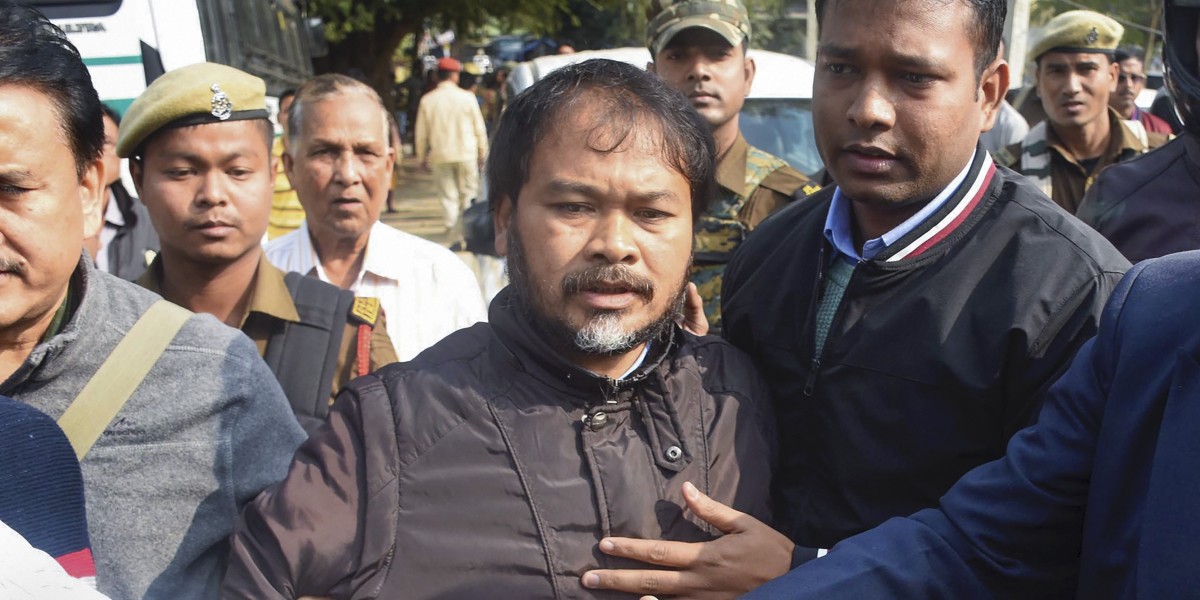 Guwahati: Akhil Gogoi, leader of Assam’s peasant organisation Krishak Mukti Sangram Samiti (KMSS), is likely to be arrested once again. Gogoi was granted bail on a bond by the court of Chief Judicial Magistrate (CJM) in Dibrugarh district on March 31 (Tuesday).

Dibrugarh district’s Chabua police station cited a ‘shown arrest’ on March 28 in connection with a ‘case number 290’. The debated practice serves to seek custody of persons without physically producing them before courts.

The shown arrest was for his alleged involvement in anti-Citizenship Amendment Act (CAA) protests-related violence which occurred in December. But he can be arrested once again at any moment by Dibrugarh police in a ‘new’ undisclosed case, according to one of his lawyers who spoke to The Wire.

Gogoi, until now, has been kept at Sivasagar jail.

The shown arrest by Chabua police station on March 28 coincided with Gogoi being granted bail in a Sivasagar police station-related case, filed between December 11 and 12, also allegedly related to anti-CAA violence.

Case numbers 289 and 290 accused Gogoi of ‘attacking police vehicles’, ‘mishandling of police personnel’, ‘preventing police from doing its duty’ and other offences.

Dibrugarh police had, earlier in March, tried to seek custody of him. He was then under Sivasagar police custody.

“Gogoi has been granted bail bond in the shown arrest case related to Chabua. But Dibrugarh police is waiting in front of Sivasagar jail to arrest him in another new case. We do not know what it is. The two cases were filed in December but so far Dibrugarh police have not been able to arrest him. Regarding case number 289, the CJM court didn’t give permission for arrest and has scheduled a hearing for April 1. It was for case 290 that Chabua police has shown arrest,” said Gogoi’s lawyer.

Before he was granted bail on the Sivasagar police station-related case on March 28, Gogoi was sent to 14-day judicial custody by the Sivasagar CJM court last week (on Monday, March 23). He was arrested by Sivasagar police from Guwahati Central Jail on March 19 for anti-CAA related violence for ‘illegal assembly of people in Sivasagar district’.

Mukut Deka of KMSS told The Wire since there has been an order seeking the release of some convicts from jail on account of the COVID-19 pandemic and so Gogoi should also be released on the same grounds.

“Akhil Gogoi could have walked free but many were cases heaped upon him one after another,” said Deka.

Gogoi was granted bail by a special National Investigation Agency (NIA) court on March 17 in a case which branded him as a ‘Maoist’ and for which he was arrested on December 16. The NIA was not able to file a charge sheet within the period of the 90 days of Gogoi’s stay in jail.

Also read: The Travails and Scuffles That Marked Akhil Gogoi’s Rise in Politics

But even after getting bail from the NIA special court Gogoi was stuck at Guwahati Central Jail. He was then taken by Sivasagar police on March 19 and kept under four-day police custody.

On March 26 Gogoi was granted bail in a case by the Panbazaar police station (crime branch). The case was registered in January and was, once again, related to anti-CAA protest violence.