Two women activists of AISA have alleged that they were subjected to brutal treatment by women personnel who said they were eager to teach them a lesson. 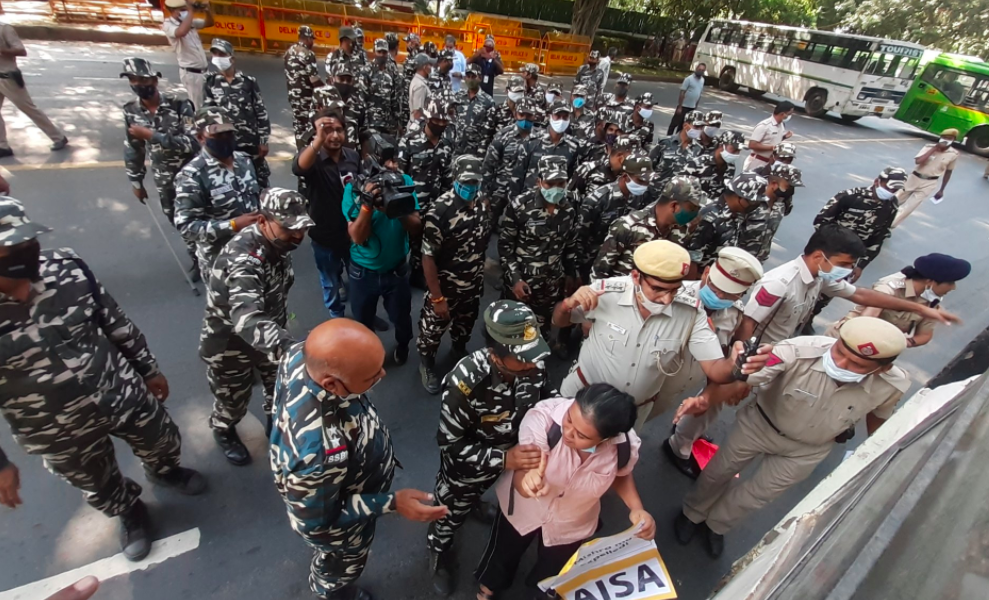 An image tweeted from the protest near Amit Shah's residence on Sunday. Photo: Twitter/@PrasenjeetKuma6

New Delhi: Two student activists of the All India Students Association have said that they were stripped and repeatedly kicked in their private parts by women constables of the Delhi police while they were protesting near the residence of Union home minister Amit Shah on Sunday, October 10, seeking the arrest of the son of Shah’s junior minister, Ajoy Mishra’s son Ashish in connection with the Lakhimpur Kheri incident.

One of the alleged victims wrote on social media with details on the assault, which she claimed had been deliberate. She wrote that the protest involving 15-17 students started at around 1 pm and mentioned that the students were “unarmed and peaceful,” and were at the agitation with placards and posters.

She further stated that initially there were no women police officers present at the protest site and that the male protesters were brutally manhandled and detained in a bus.

‘Were targeted when they tried getting their snatched phone back’

The victim wrote that an office bearer of AISA was recording the manhandling of the male protesters when a police personnel snatched her phone. The two women then decided that they would not allow themselves to be detained till they got the phone back.

It was then, she added, that “both of us were first taken to opposite sides of the road and were then dragged onto the road for a good 300-400 metres. The women police personnel on duty first proceeded to lift off my kurta in order to shame me, threw me inside the bus and then proceeded to kick my private parts repeatedly for 20 minutes. They did the same thing with (name withheld) and repeatedly stomped on her right foot to inflict severe pain. They only stopped when I started crying profusely due to the immense pain I’d started feeling inside my vagina.”

All this while, the girl narrated, “the male police personnel were simply standing and watching all of this happen. The women personnel especially targeted clothes as well as private parts in order to induce shame and pain – this tactic has been followed by the Delhi police in other protests as well.”

‘Not given medical attention, threatened not to file FIR’

The AISA member further wrote that since both the other girl and she were in severe pain they asked to be taken to a hospital. She said while there was pain in her private parts and swelling in her left arm the feet and legs of the other woman, who was targeted likewise, had begun to swell from the beating.

The post also mentioned that the two victims “were denied the right to seek urgent medical attention” and were “later threatened with repercussions if [they] dared to file an FIR”.

The AISA activist who wrote the post also stated that “the targeting of women protesters has become an often used weapon in the toolkit of the Delhi police: assertive women are especially targeted to show them their place as was quoted by one of the women police personnel before she went onto target my private parts, ‘We will show you your aukaat (audacity)’.”

Krishnan had asked in her tweet, “If police do brutal sexual assault on India’s streets then what do they do in their own premises?”

‘No response yet, complaint to be filed with CP tomorrow’

Speaking to The Wire, Krishnan said she has received no response from either the Commissioner or the Deputy Commissioner’s office. “There is radio silence. But we are preparing a statement, we are circulating it for signatures, etc. and we are planning a protest tomorrow.”

She said no formal complaint has been submitted by the two young women. “They have not done that. This happened late in the afternoon on the day before yesterday and they were pretty traumatised. So they have not filed a complaint yet and now we are  thinking of going directly to the Commissioner of Police. We are hoping to meet him and will be submitting a letter there. Let them institute a proper inquiry into this.”

“It is not just one person who did it. It was done with two separate young women at two separate places – one inside the bus and the other on the side of the street,” Krishnan added.

“It is just that with the girl who wrote the post they got very vindictive about it and told her ‘aukat dikha dengay’ (will make you pay for your audacity) and then they stripped and repeatedly kicked her. It wasn’t in the heat of the moment that the cops did this with the other girl – they were not clearing the road or anything – they just took her aside and did this,” Krishnan said.