Trade unionists have said rehabilitation procedures have been flouted during the process. 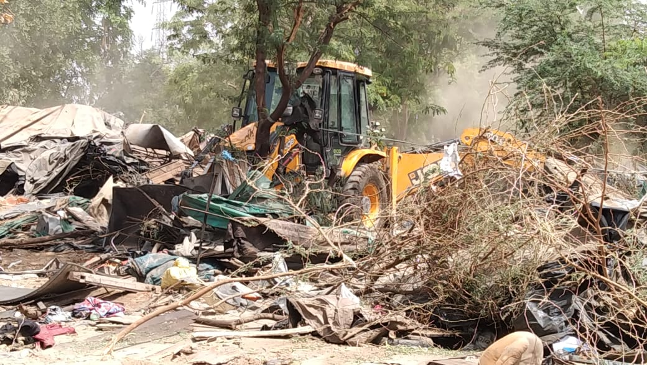 New Delhi: The Ahmedabad Municipal Corporation (AMC) demolished 69 settlements of tribal construction workers in the city’s Motera area on Wednesday. This was done to make space for the phase 2 project of the metro rail line being made under the Ahmedabad Metro Project.

“The eviction is in complete violation of the rehabilitation guidelines of the project that is supported by the Japan International Cooperation Agency (JICA),” says Mina Jadhav, secretary at Majur Adhikar Manch, an Ahmedabad-based trade union.

Last year in February, the AMC had stopped its eviction proceedings amid outrage during then US President Donald Trump’s visit to Motera stadium nearby. The people living in the area belong to Scheduled Tribes, falling under the category of indigenous people, and are hence entitled to special protection under JICA social guidelines, a member of the union told The Wire.

Several families have been living in the settlement for over ten years and some had even gone to their villages for Holi when the demolition took place, the union said. Sakri Ben Shankar Bai is one of the oldest residents of the area, who has been displaced due to the eviction. “I lived here for almost 15 years. A vehicle came and broke down my house along with all my belongings just like that,” she says. She is a widow and lives with her son, who was away at work when the demolition happened. “Even my grains were destroyed during the demolition,” she laments.

“It is to be noted that all the residents of the Motera basti are tribal migrant construction workers from Dahod and surrounding districts who migrate with their family. The low wage rates means that they can not afford rental housing and are forced to live in the open,” the union said in a statement.

Also read: ‘We’ll Be Back to Where We Started – On the Roads’: Fear Prevails as Delhi Slum Eviction Looms

Under the rehabilitation guidelines, even those families who are believed to have illegally occupied the area have to be given alternative accommodation. The residents are also entitled to the compensation as per the valuation of the structure, the right to salvage affected materials, subsistence allowance of Rs 3,000 per month for one year and one-time shifting assistance of Rs 50,000.

“Every single one of these conditions has been flouted by the AMC,” said Jadhav.

The Majur Adhikar Manch had demanded full compensation under the provisions of the social impact assessment of the project, compensation for trauma suffered, an inquiry into the episode and punishment for anyone found guilty, plus stopping all work on the project until the resettlement is complete, in a formal complaint. Workers stand in the area after the demolition. Photo: By arrangement

The group has also asked for JICA to adopt suitable measures so that similar violations do not take place in this project and other projects funded by JICA in the future.

However, the AMC’s deputy estate officer of west zone, Chaitanya Shah, said that a notice had been served to the people about the demolition a month in advance. “The order was challenged by the slum dwellers before the high court [of Gujarat], which dismissed the petition, ruling in our favour.” He said that the demolition was in accordance with the due process of the law, as the people living there had illegally encroached on the area.

In June last year, 60 slum dwellers had challenged the AMC’s final orders of March 18, 2020 in the Gujarat high court. The AMC order, directing dwellers to immediately vacate the area, said that the AMC would take possession of the petitioners’ land if they failed to leave.

The court ruled in favour of the AMC, noting that “a modicum of reasonable notice for removal, say two weeks or 10 days, and personal service on the encroachers…is necessary” and if the encroachment is not removed within the specified time, the AMC would be at liberty to have it removed. The court also added that in case of resistance from the dwellers, “appropriate and reasonable force can be used to have the encroachment removed”.

A month before the eviction, on February 25 this year, the Gujarat Institute of Development Research, at the behest of JICA, which is funding the project, had undertaken a social impact survey of the 69 slum dwelling families.