After Release, Chandrashekhar Azad Urges People to Not Vote for ‘Communal’ BJP

Attributing his early release to the UP government being 'scared' of a rebuke from the Supreme Court, the Bhim Army chief speculated that fresh charges could be framed against him within ten days.

New Delhi: After he was released early on Friday morning from Saharanpur jail, Bhim Army chief Chandrashekhar Azad has spoken out against the BJP, the ruling party both at the Centre and in Uttar Pradesh. “Voting for the BJP is jeopardising your future generations. Now I have come back, I will appeal to everyone in the country that they should not vote for BJP in 2019 under any circumstance,” Azad told reporters.

He urged people to be wary of those who speak in different voices at different times. “We will take our movement forward and try to educate the public about the kind of people they should stay away from. The kind of people who are like two headed snakes and who bite.” 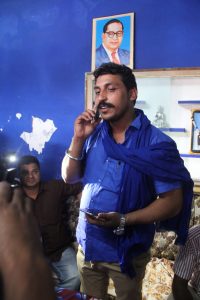 Azad also said the UP government decided to release him before November 1, when the application of the National Security Act against him would have lapsed, as it was “scared” of a reprimand from the Supreme Court. “Government was so scared that they are going to be rebuked by the Supreme Court, that they ordered an early release to save themselves. I’m confident they’ll frame some charges against me within ten days: I’ll ask my people to throw BJP out of power in 2019,” Chandrashekhar told ANI.

The Bhim Army will organise once more and hit the streets to protest against atrocities on Dalits, Azad said. “We will protest against the detention of Dalits for the April 2 violence. We want these cases to be withdrawn. We will not step back. Even if we are put behind bars again. Even if they book us under NSA again.”

Commenting on his own political future, “Chandrashekhar will not contest the elections,” he said referring to himself in the third person.

Azad also took credit for ‘averting’ a Dalit-Muslim clash in April last year which, according to him, was planned by the BJP. “They wanted the Dalits and Muslims to clash in Saharanpur. The BJP MP took out a procession honouring Ambedkar through a Muslim dominated area with the only intention of causing communal violence. When I did not allow that to happen, they wanted to exact revenge against me.”