In the backdrop of this horrible killing of 17 Naga coal miners, Naga people must decide the price of their silence against militarisation and AFSPA. Locals during a protest over the death of people who were allegedly killed by the armed forces, in Mon district, Monday, Dec. 6, 2021. Photo: PTI

On December 4, 2021, the Indian armed forces ambushed and killed 17 coal miners in Nagaland’s Mon district. An official report stated the killings as a case of mistaken identity during a counter-insurgency operation. The Union home minister, Amit Shah, described it as an unfortunate incident, while the chief minister of Nagaland offered his condolences to the bereaved families and assured justice according to the law of the land. What do the inhumane extra judicial killings of civilians followed by apologies tell us about the state of India’s democracy?

The law of the land in Nagaland is the Armed Forces (Special Powers) Act since 1958, an extra-constitutional regulation that declares the state as disturbed and dangerous. In June 2021, the Ministry of Home Affairs (MHA) extended the AFSPA till December 31, 2021.

The Indian armed force in Nagaland has the power to override civic organs to maintain public order on the ground. The AFSPA (1958) gives excessive power to all Indian security personnel to use force any kill any person on grounds of mere suspicion. In addition, the act also authorises all armed forces to make arrests and raid any premises without a warrant. Decades of alarming documentation of human rights violations across Northeast India suggest how security personnel operating under the AFSPA enjoy legal impunity. In response to the Supreme Court of India’s concerns about the existing impunity, the Indian armed forces have argued that the civil courts should keep off from the military justice system.

Human rights activists observe that upholding the rights of victims who have undergone torture, extra-judicial killings, and disappearances under the AFSPA is extremely challenging.

The history of holding perpetrators of state violence accountable in Northeast India is appalling. As the theatre of condolences and assurance for justice flows from the lips of and Twitter feeds of politicians, one will have to wait and see how the reality of the gory massacre plays out. The debates about prosecution and criminal charges will play out in the offices of the Indian government and its armed forces in New Delhi.

Hosting of black flag and closing down of Konyak Morung at Kisama abstaining from celebrating Hornbill Festival 2021 in solidarity with killings of innocent public at Oting in Mon district of Nagaland on 4th December 2021 by security forces. pic.twitter.com/E9S7tWBSf9

But what is happening on the ground in Nagaland? The immediate causality is the Hornbill Festival of 2021. “How can we dance when our people are getting killed?” The Eastern Nagaland People’s Organisation (ENPO) noted in an official statement and withdrew from the Hornbill Festival 2021. The ENPO is the apex body of the Konyak, Chang, Sangtam, Khiamniungan, Yimchunger and Phom tribes in Nagaland.

Also read: AFSPA, the Law That Allows Incidents Like the Nagaland Killings to Occur

Launched in 2000 to coincide with the celebration of Nagaland statehood day on December 1, the Hornbill Festival has become the go-to place to experience Naga culture for tourists. A festival jam packed with performances from December 1 to 10 every year, this event is the supermarket of Naga music, dance and food. However, it is staged so be cautious. And like any staged production, the reality of Naga lives on the ground brought the show to a halt for 6 Naga tribes.

Since the start of the Hornbill Festival in 2000, the Konyak Naga performers from Mon district have been one of the most photographed and celebrated cultural troupes. In 2021, their head-hunting dance and the chanting curses attracted cheers and applause from the audience. The guest of honour for the day enjoying the performance was the General Commanding officer of 4 Corps, stationed in Tezpur (Assam), Lt. Gen. Ravin Khosla. The following day, armed forces from the 3 Corps headquartered in Dimapur (Nagaland), killed 13 Naga coal miners in Mon district. The events unfolding on the ground is a reality of lives under the AFSPA.

The shock and condemnation are meaningless unless the draconian AFSPA (1958) is repealed. This Act suspends the right to life, a fundamental right enshrined under Article 21 of the Indian Constitution, for the Naga people and its neighbouring states in Northeast India. Many extrajudicial killings were forgotten in the past. This one will be no different. Eventually, those who continue to remember the 13 coal miners will be perceived as inconvenient commentators. To remember our Naga past is often considered a burden. Yet, moments like this take away the dreaded fog of fantasy. The Naga past is filled with stories of weeping as our elders buried thousands of bodies with bullets marks. Our heartbreak and rage are not new. The beautiful Naga villages that adorn the covers of tourism brochures also hold tales of horrifying events carried out under AFSPA. The memories hang like mist even today.

At the opening ceremony of the 2021 Hornbill Festival, the Governor of Nagaland Jagdish Mukhi encouraged the young Naga generation to take pride in their traditions. The demand for the repeal of AFSPA is part of Naga tradition. The testimonies of torture and death of Naga elders at the hands of the Indian armed forces constitute an integral part of Naga past. If there is a time to reflect on the significance of our Naga tradition, it is now.

The Hornbill Festival, a manufactured state event that has grown cold for this year, helps us to see what we had almost forgotten. It reminds us that no amount of tribal dancing will deliver the Naga people from the brutal reality of militarisation. The romancing is suspended for the time being as Naga people across generations wake up to the brutal reality on the ground. The Indian army will joyfully fire at the Naga people across electoral party lines. Being a Bharatiya Janata Party (BJP) member in Nagaland is not a get out of AFSPA card. Even the BJP flag, the current symbol of progress and power in Nagaland, has suddenly become an ineffective, disappointing rag that cannot offer protection.

As the news of death sweeps across the Naga homes, it calls us to tattoo a manifesto of justice in our hearts. But what is the roadmap for this journey of consciousness? And is there a language to translate the tears from the eyes of the dying? The last trail of the Naga coal miners from Tiru is the landscape for us to chart this plan. Official reports called the 13 Nagas killed as daily wage labourers who worked in the coal mines of Tiru.

Bordering the state of Assam, the foothills and upper elevations of Mon district are dotted with coal mines. During the dry winter months, known as the high season for coal extraction in Nagaland, thousands of Naga workers descend on the coal mines to earn a livelihood. Life in the neighbouring Konyak villages surrounding the mines is filled with challenges. In 2013, a national survey highlighted that Mon district reported the highest number of child labour and children trafficking cases in Nagaland. Majority of the children worked as maids in households across the districts of Kohima and Dimapur. In addition, many Konyak youths also migrate out of the state and work in low paying jobs like cashew factories and as waiters in Kerala, Tamil Nadu and Maharashtra. 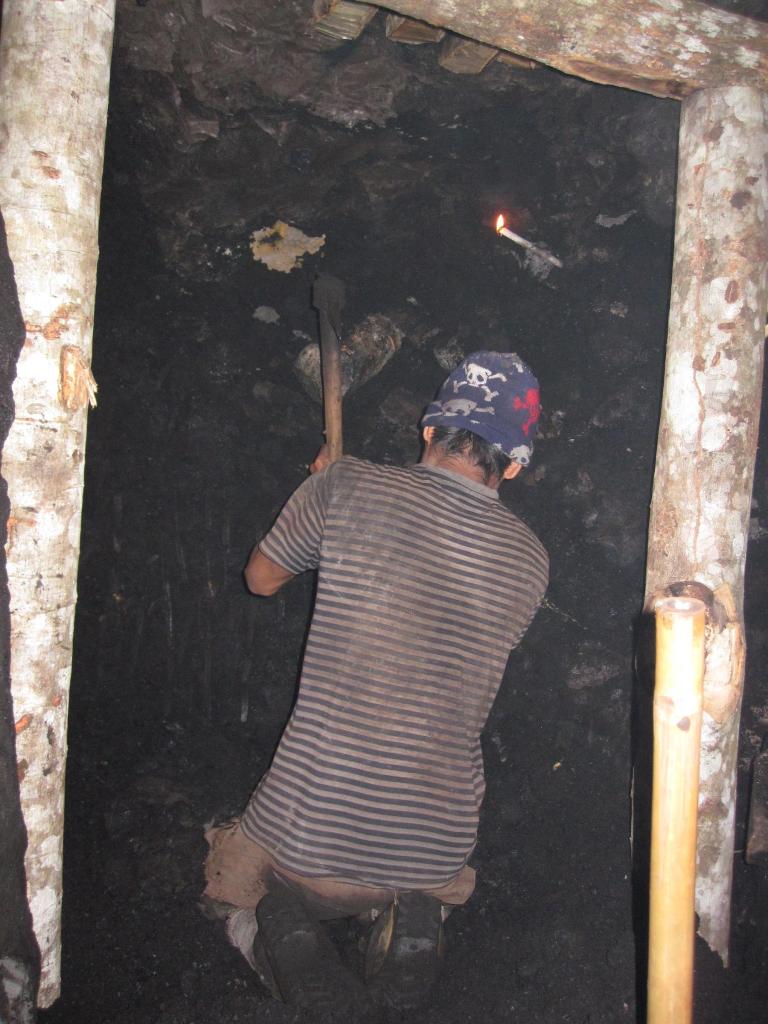 A coal mine in Nagaland. Photo: Dolly Kikon

During my doctoral fieldwork along the Assam-Nagaland foothill border between 2009 and 2011, I visited the coal mines in Mon district. The winters are cold and dusty. The Konyak coal miners in the coal sites were covered in soot and sweat. By December, the coal mining season coincided with several social events. The Christmas month and the festive spirit meant that the coal miners planned to buy new clothes for their families and spend time with their friends. Although their earning was meagre as daily wage labourers, they always planned to share it with loved ones. It was also a time to welcome the migrants who returned home for the holidays. And then there were weddings of family members, cousins and friends to attend. Even in the deep dry cold coal caves, the month of December invoked a spirit of festivity. The exhaustion of the coal miners left their faces when talked to me about their village in the hills. They smiled. Going back to the village always meant going back home.

In the backdrop of this horrible killing of 17 Naga coal miners, Naga people must decide the price of their silence against militarisation and AFSPA. No musical note or the dizzying cultural dance at the Hornbill Festival will protect us. We are reminded of our traumas. The scars of torture of loved ones at the hands of the armed forces, the Naga factions’ blood thirsty fights that killed our elders, and our parent’s fears and tears when we returned home late during curfew. The Hornbill Festival of Nagaland never promised to capture the reality of Nagaland. It cannot whitewash a trauma that has travelled across three generations and will surely haunt the fourth for years to come.

My grandparents, parents, and my generation have known the horrors of India’s counterinsurgency campaigns in our ancestral domains. With the Indo-Naga ceasefire in 1997, we were lulled into believing that the future generation of Nagas will experience a different future. The events in Mon district hammer home the naïveté of such hopes. AFSPA culture creeps up and attacks us like the December 4 killings of Naga coal miners.

Naga elders who witnessed the worst counter-insurgency operations across the Naga villages failed to describe the horrors in words. They wept but were noiseless lest the Indian intelligence spies reported them as sympathisers. As we make sense of this tragedy, we do not require any interpreters to spin a story of justification. Nagas need to see the official notification from the Indian state that spells out the repeal of AFSPA from Nagaland and its neighbouring states.

The official deadline for the AFSPA in the state is December 31, 2021. May we all have the courage to preserve our Naga tradition that calls upon each of us to fight for justice. May we inherit the tongues of those who died crying for justice, and cease to be dual citizens of terror and hope.

Dolly Kikon is a Senior Lecturer in the Anthropology and Development Studies Programme at the University of Melbourne.

This article was originally published on Raiot.