For Aerocity's Quarantined Passengers, a Prolonged Wait for Test Results

"After completing 14 days in quarantine, why is nobody coming to test us?" asked a government officer in quarantine at the IBIS hotel.

New Delhi: Last month, the Delhi government had ordered three premier hotels in Aerocity near the Indira Gandhi International (IGI) airport to set aside as many as 182 rooms for paid quarantine facilities for those flying in from abroad. At the three hotels – IBIS hotel, The Lemon Tree Premier and Red Fox – the per day fee was kept at Rs 3,100 (plus taxes). This amount includes meals three times a day, tea, coffee as well as TV and WiFi.

On Friday, April 3, around 20 people who had opted for paid quarantine confronted the IBIS hotel administration and police officials, alleging that they were not being allowed to leave the premises even after the 14-day quarantine period had come to an end. They said that they were shelling out more than Rs 50,000 per person.

Later that day, after the district administration and media personnel were informed and chaos ensued in the afternoon and evening, most of them were told at around 9 pm that they could leave.

On April 4, two people from a batch of 86 persons who had arrived at the hotel on March 22 also told The Wire that they were unlikely to be released today even though they had completed 14 days of the quarantine period.

A captain in the merchant navy, who spoke on the condition of anonymity, said, “Today was supposed to be the last day of quarantine, but they have not tested us until now. When I asked the authorities, they said that they would test us today, which means we would get results after two days and then the process will be complete after another day or two. By then, we would be in our 17th or 18th day of quarantine. I have already paid Rs 48,000 and would have to pay Rs 14,000 more for the delay on their part.”

“The least we can ask is to get tested today and get the results by tomorrow so that we can leave for our homes,” he said. 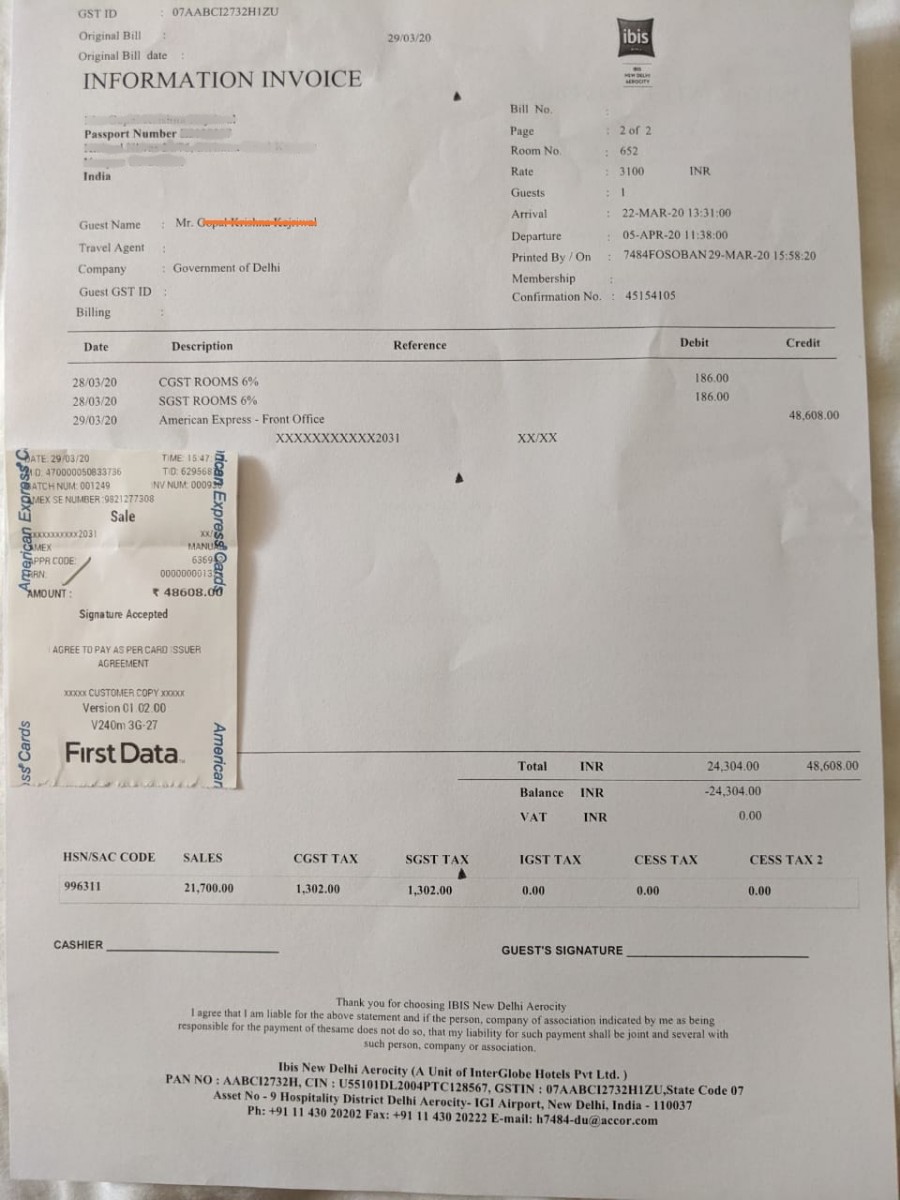 A guest’s bill for the quarantine period. Photo: Special arrangement

Prashant Chaturvedi, a 31-year old businessman, who had opted for paid quarantine on March 20, told The Wire, “I completed my 14 days quarantine yesterday. Today, when I stepped out of my room for the first time in the 15 days, there was no one to answer my queries. They said they would let me know on Monday and this really angered us.”

“I got to know that around 20 people who have completed their quarantine period in the last three-four days have not been allowed to leave because of an unnecessary delay on the part of the administration,” he said

Chaturvedi said that it was then that district magistrate Tanvi Garg intervened. “She finally sent representatives who came with many police constables and CRPF officials and asked us to maintain law and order. They even recorded videos of us while we were talking to them. We were given no answers as to why we were being forced to stay in quarantine even after we had tested negative. Why must we pay extra money to the hotel?” said Chaturvedi.

Also read: Modi, Coronavirus and the Plague on Reason

“We called up mediapersons in the evening to describe our situation and later at night around 9 pm, we were told that we could leave,” he said.

A retired army officer, who preferred to remain anonymous, told The Wire that he was staying at the IBIS hotel with his wife – in different rooms – after returning from Ireland for the last 18 days even after having tested negative. He said the couple had paid close to Rs 1 lakh so far and was in no condition to pay an additional Rs 16,000 – which the hotel had asked from them a day before. Outside a room at the IBIS hotel. Photo: Special Arrangement

He said that the civic administration was really inefficient and could not manage this situation and kept delaying everything. “Today, only after we got together and questioned the authorities were we are allowed to leave late at night after completing 17 days in quarantine,” he said.

“I was told at the airport that we have no symptoms and would be quarantined only for 4 days. My wife was not in the best of health so, and thinking it would only be for four days, I decided to opt for a paid quarantine. Now I have paid more than Rs 96,000 and they are asking for more money – which I am unable to pay,” he said.

“I am a retired army officer who gets a small pension and this is an unnecessary financial burden on people like us. I have never stayed in an expensive place like this for so long,“ he told The Wire.

He also alleged that when he asked if he could leave on the 14th day of his quarantine, he was told that he had to be tested first. “I asked them why I had not been tested earlier. This was an unnecessary delay. They tested me and my wife on March 31 when we had crossed our 14th day of stay,” he said.

Claiming that he was being asked to pay more now, he said, “I had to take business class tickets to beat the March 18 entry window. I was paying all this from my pension money.” A guest’s bill for the quarantine period. Photo: Special arrangement

Prashant Chaturvedi who arrived at the hotel on the morning of March 20 said, “I completed my 14 days quarantine period yesterday but the officers did not allow me to leave today and there is no sign that I will be allowed to leave this place tomorrow or anytime soon.”

“There are many people who have been staying here since March 16 but are not being allowed to leave premises after their 14 day quarantine period. I got really scared. These 14 days were difficult but necessary so I consented to it. Now every single day beyond the completion of that period is going to take toll on my mental health,” Chaturvedi said.

Chaturvedi also told The Wire that there were around 23 people on his floor of the IBIS hotel in Aerocity who had completed over 15 days in quarantine but were not being allowed to leave even after having tested negative for the novel coronavirus. Some of them were allowed to leave at around 10 pm on Friday, he said.

“After arriving in India, I was kept in category C by airport authorities. This meant that I could have home quarantined myself, but I volunteered for this paid quarantine as I did not want to take any risk of carrying the virus to my old parents. I did not want to further burden government resources since I could afford to pay for a private quarantine centre,” Chaturvedi said.

Chaturvedi, who is a managing director at the Staris Group, lamented the lack of information surrounding the quarantine period.

“I have the right to know. There were around 20 people in the same situation who gathered in the lobby when Mr Rana, the deputy district magistrate came and said that we could not be released before all the tests were done. However, he could not provide us with any answers as to why tests were not being undertaken for the past 15 days or more and why a report on the same was not being released. The deputy district magistrate said that all the forces had currently been deployed to the Nizamuddin area. They then brought more police constables, CRPF officials and started recording videos of us.”

Chaturvedi stressed that there were several people who had not been tested yet and that it was not safe for people to continue staying at the hotel even after completing their quarantine.

He further alleged that the ministry’s order was being misinterpreted by officials. “The health ministry order says that people who are part of any group will be quarantined and not released until everyone tests negative. But we are not part of any group, we all have come from different places, different flights, at different times and we are staying in different rooms, even if some are a part of one family. The officials are considering all those staying in the hotel as a part of one group and are asking us to get a clarification from the ministry and give it to them,” he said.

“They have imposed GST on quarantine service as well. I am not willing to pay more for this unnecessary delay on their part,” he said. A government employee staying at the hotel who wished to remain anonymous said, “Many people have been here for more than 20 days, including some Indian nationals who came for medical treatment. Many are staying without even being tested.”

Another 59-year-old government officer told The Wire, “We are also Indian citizens and cannot be treated like this. We chose this paid quarantine as we do not want to be a burden on the government and want its resources to be used for those who really need it.”

He said that many people were being kept in the hotel because of negligence and delay in tests and test results. Speaking to The Wire, he said, “They are misinterpreting the ministry’s order which is only in reference to those who travelled in groups and we are not a part of any group. Officials are also assuming that they do not have to release anyone till April 14, when lockdown will end.”

“If anyone who has not been tested yet tests positive, then the entire hotel will be quarantined further. That too when everyone is staying in separate rooms. I am not willing to disclose my name and post as I will be in trouble later,” he said.

He also added that the hotel bills were an “unnecessary financial burden on us”.

“After completing 14 days in quarantine, every day is taking a toll on our mental health. Why is nobody coming here to test us even when we are ready to pay Rs 4,500 for private labs testing?” he said

“Were they making us stay longer to benefit the hotel? This was nothing but blackmail and intimidation,” the retired army officer said to The Wire.

The Wire has reached out to the district magistrate Tanvi Garg for a response. This story will be updated as and when a response is received.