"The word 'urban Naxal' is not defined. But the way they have been using pen drives and gadgets to spread their agenda can be the right definition of the term," the prosecution told the court. 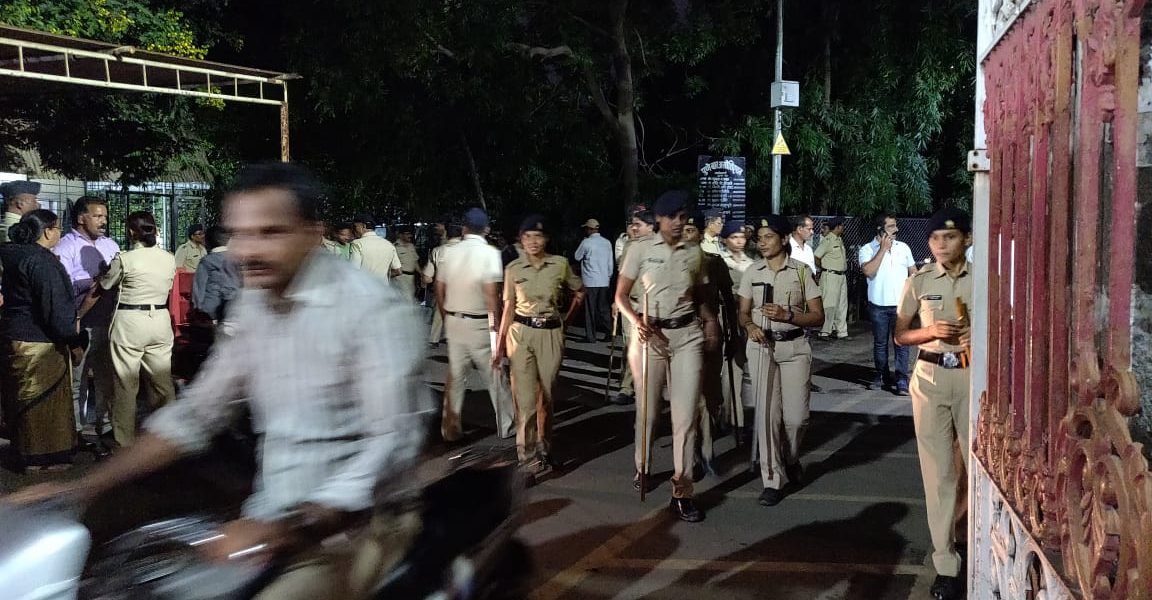 Police outside the Pune court on Wednesday. Photo: The Wire

Pune: Three of the five human rights activists who were arrested on Tuesday – Arun Ferreira, Varavara Rao and Vernon Gonsalves – were produced at a district court in Pune on Wednesday and accused by the prosecution of involvement in a range of crimes from the planned assassination of top government functionaries to ties with Kashmiri separatists and riots in Pune.

Additional sessions Judge K.D. Vadane was hearing the case, and the state wanted the three activists to be sent to police custody. While the court had adjourned for 30 minutes after arguments were heard, the Supreme Court delivered an interim order on a writ petition filed by Romila Thapar and others, saying that all five arrested activists are to be kept under house arrest at their own homes until September 6, under police watch.

At 7:15 pm, the judge delivered his order, saying that the Supreme Court has granted house arrest to all three activists. “You will be sent home and kept under house arrest,” he said.

Right after they were produced before the court at 3:35 pm, the judge asked if they had any complaints. Rao told the court that he was made to sign papers that were written in Marathi and he could not understand it. “I suspect the police could have made me sign on problematic documents. I do not read or understand Marathi. They chose to make the seizure panchnama in a language unknown to me,” Rao told the court. He also informed the court that he has been suffering from several illnesses and has been on medication. Rao is 79 years old.

What the state had to say

Public prosecutor Ujjwala Pawar was representing the state of Maharashtra. She said that the arrested activists were part of an “anti-fascist front” that wanted to overthrow the Indian government, and were planning to assassinate top leaders as part of their plans.

At a press conference today, Pune police said that some of the evidence collected suggests that there was a plan to target the “highest political functionaries”, without elaborating.

Pawar told the court that Varavara Rao and Surendra Gadling – one of the five people who were arrested in June in the same case – were worried about the present government and wanted to find a way to end it. Rao was given the authority to purchase ammunition for the group from Nepal, Pawar said. According to the prosecution, a “Comrade from Manipur” has been in touch with Rao and was involved helping Rao procure ammunition from Nepal.

The public prosecutor also brought up Mahesh Raut, who was arrested at the same time as Gadling, and said that Ferreira had convinced Raut to join the “arms movement”. Ferreira also influenced two-three students, including someone named Manju, at the Tata Institute of Social Sciences, Pawar said (Raut did his masters from TISS), and they have joined the Naxal movement.

“Varavara Rao,” Pawar said, “is managing the funds to initiate fact finding committee’s work which can be used against the government. Rao was supposed to make lakhs of funds available during demonetisation. This money was supposed to be given to Gadling. But it could not be arranged.”

In addition to funding, according to Pawar, Rao was supposed to organise the ammunition.

“The word ‘urban Naxal’ is not defined. But the way they have been using pen drives and gadgets to spread their agenda can be the right definition of the term,” Pawar told the court.

She said that Jignesh Mevani and Umar Khalid are “good young recruits”.

Pawar also mentioned the name of Ganapathy, president of the Communist Party of India (Maoist), and said that he is “very happy with the work Ferreira is doing in the western region of inspiring research scholars in Mumbai and Pune to join the revolutionary movement”.

Pawar read out two letters which the police claimed to have procured from Wilson’s laptop. According to the letters read out in the court, most conversations were between Wilson and Gadling.

In over three hours of argument, the prosecution did not attribute any specific offense to Gonsalves. While reading one of the two letters, Pawar stated, “Both Gonsalves and Ferriera have been concerned with the present situation in the country and wanted to overthrow the incumbent fascist government.” Pawar claimed this was mentioned in the letter written to one Comrade Prakash by Rona Wilson (arrested earlier in the Bhima Koregaon case).

Pawar also claimed that the fact-finding committee that had visited Gadchiroli soon after 40 persons belonging to the Adivasi community were killed (including seven children) was organised with an intention to show the state in a bad light. This, Pawar claimed, was organised by Ferreira and funded by Rao. To this, Gonsalves’ lawyer Rahul Deshmukh retorted by saying that constituting a fact-finding team and visiting any place for an inquiry is not an unlawful act.

Allegations have no link to case at hand, says defence lawyer

“The police’s only claim is that they are connected with the banned organisation CPI-Maoist,” Nahar continued.

“Bhima Koregaon was a fight between Dalits and Marathas. Some speeches were given and riots followed. But that the riot be called a terror act is contentious,” the defence lawyer said. “The intention of the accused is crucial. There is no proof to show these people were involved in the riots.”

Nahar cited the Supreme Court order from the 2011 case on Binayak Sen and said merely being a member of a banned organisation can’t be termed as as an offence under the Unlawful Activities (Prevention) Act. “Some of the speakers gave a clarion call to the mass gathered. Slogans like ‘Chala ladhai la chala (Come join the fight)’ were shouted at Elgar Parishad, but how this connects with UAPA is not clear.”

“Arms that were to be procured from Nepal have nothing to do with the case,” Nahar continued.

Ferreira appeared for himself. “The public prosecutor has been arguing for so long that we are a part of a larger conspiracy on the basis of the letter that they claim to have seized on April 20. It has been four months since the police claims to have procured the letter, they have already arrested five persons and Gadling, who the police claims is the writer of one of the letters, is already in their custody,” he told the court. “The seizures made at our residences are with them and the police today told the court that they have sent the seizures to the FSL for chemical analysis. The reports are yet to be obtained. We have cooperated completely with the investigation. Our physical custody is not required anymore.”