Lateef Ahmed Baja, Ali Bhatt and Mirza Nisar are happy to have returned to their homes, but are shocked it took more than two decades to prove their innocence.

Srinagar: With tear-filled eyes, Lateef Ahmed Baja’s relatives, friends, and visitors surround him in his muddy house located in the downtown Srinagar to hug him after almost two-and-a half decades.

Lateef can’t believe that he is finally free – for over two days he hasn’t slept and eaten anything out of happiness.

His mother, Noor Jahan, 58, sits close to him and places her hands on his head as if to reassure herself that he is finally home. Over the years, she always kept her eyes on the door, waiting for her son to arrive. Her prayers have been finally answered.

Locals were preparing khewa and wazwan to serve the guests when, amidst sobs and tears, Lateef finally returned home.

Lateef sits on a chair, observing and trying to acquaint himself with the people who had come to see him. He is seeing many of his relatives for the first time.

The 42-year-old had just been reunited with his family after spending 23 years in different jails for a crime he did not commit.

His relatives flooded his house with garlands and bouquets to welcome him. Lateef’s father, who went to meet Lateef in Jaipur while he was detained, died just a week after seeing him in Srinagar.

On July 23, the Rajasthan high court acquitted Lateef, along with two other Kashmiri men – Ali Bhatt (48) and Mirza Nisar (39) – and two other accused – Abdul Goni (57), who hails from Doda district of Jammu and Kashmir and Rayees Beg (56), a resident of Uttar Pradesh’s Agra – of all charges relating to the 1996 Samleti blast case.

All three Kashmiris were released as the prosecution failed to prove their involvement after holding them for over 23 years. They all walked free, innocent, but it took the courts 23 years to pronounce the verdict.

Also read: Acquitted After 16 Years in Jail, Kashmiri Man Imagines a Life That Could’ve Been

The acquittal came just two years after a Delhi court acquitted two other Kashmiris, Muhammad Hussain Fazili and Mohammad Rafiq Shah of all charges relating to a series of explosions that killed 67 people and left 200 wounded in the Indian capital in 2005. The third accused, Tariq Ahmad Dar, was convicted on minor charges, not initially framed by police

Lateef says he was offering Asr (third of the five daily prayers) when around a dozen cops raided their rented apartment in Kathmandu. Before they were jailed, the trio was involved in trading carpets and other Kashmiri handicrafts with businesses in Delhi and Kathmandu.

“I still remember when they banged the door. Before we could understand what was going on, we were bundled into a vehicle and taken to New Delhi,” Lateef recalls.

He says they were beaten up for over a week and then forcibly made to sign on blank paper sheets. “This is how they frame you. They beat you first and terrorise you, then they will take your signatures on blank papers to write their stories accordingly,” Lateef says. He says his legs were broken and for months, he couldn’t walk. He was unable to sit on the floor so a special chair was furnished for him.

“It’s was after some 15 days that I came to know that we have been framed in some blast cases,” narrates Lateef.

“I was shocked to know that I was linked with a blast that had occurred in Mahua in 1996 and then also with the Lajpat Nagar bomb blast case of May 1996,” he says, in his room, jam-packed with visitors.

He says there was no one to help them, no one was talking about them, and the media portrayed them as terrorists.

“I want to ask those journalists, will they apologise now? Will they bring back our 23 years of life?” questions Lateef as tears roll down on his cheeks.

Lateef was then taken to a jail in Jaipur alone, and then to a jail in Gujarat, where he was detained for a period of two years. After that, he was taken back to the Tihar jail, where he spent 13 years. He spent another 8 years in the Jaipur jail.

Recounting his time in jail, he says he, Ali and Nisar would exercise and pray regularly. “We didn’t lose hope because we knew we are innocent, but we couldn’t imagine that we would have to spend 23 long years in jail for a crime we never did,” Lateef says.

He says that life in the jails, especially in Jaipur, was very tough. The weather and inmates, all made it difficult for them to live. “We were usually beaten by jail inmates because of our religion. And when you are a Kashmiri, it’s enough for them to treat you differently. And after the Pulwama attack, they almost killed us,” Lateef says.

Also read: There Must Be a Price to Pay for Wrongful Convictions

Days after the Pulwama attack, a Pakistani man being held at a jail in Jaipur was killed by his fellow inmates. Lateef says thousands of Muslims have been falsely implicated in differed crimes and are behind bars.

“You have Muslims from Mumbai, UP, Delhi, and other states, who have been wrongly linked to different cases. They have spent almost 20-25 years in these jails. There is no one who can give them justice,” Lateef says,

At the residence of Mirza Nisar Hussain, in Fateh Kadal in Srinagar, a huge crowd of people was jostling to catch a glimpse of Mirza.

Mirza, 39, was just 16-years old when he was arrested. Like Lateef, he is unable to recognise his family members. His brother was sitting by his side, introducing him to a friend and other relatives. 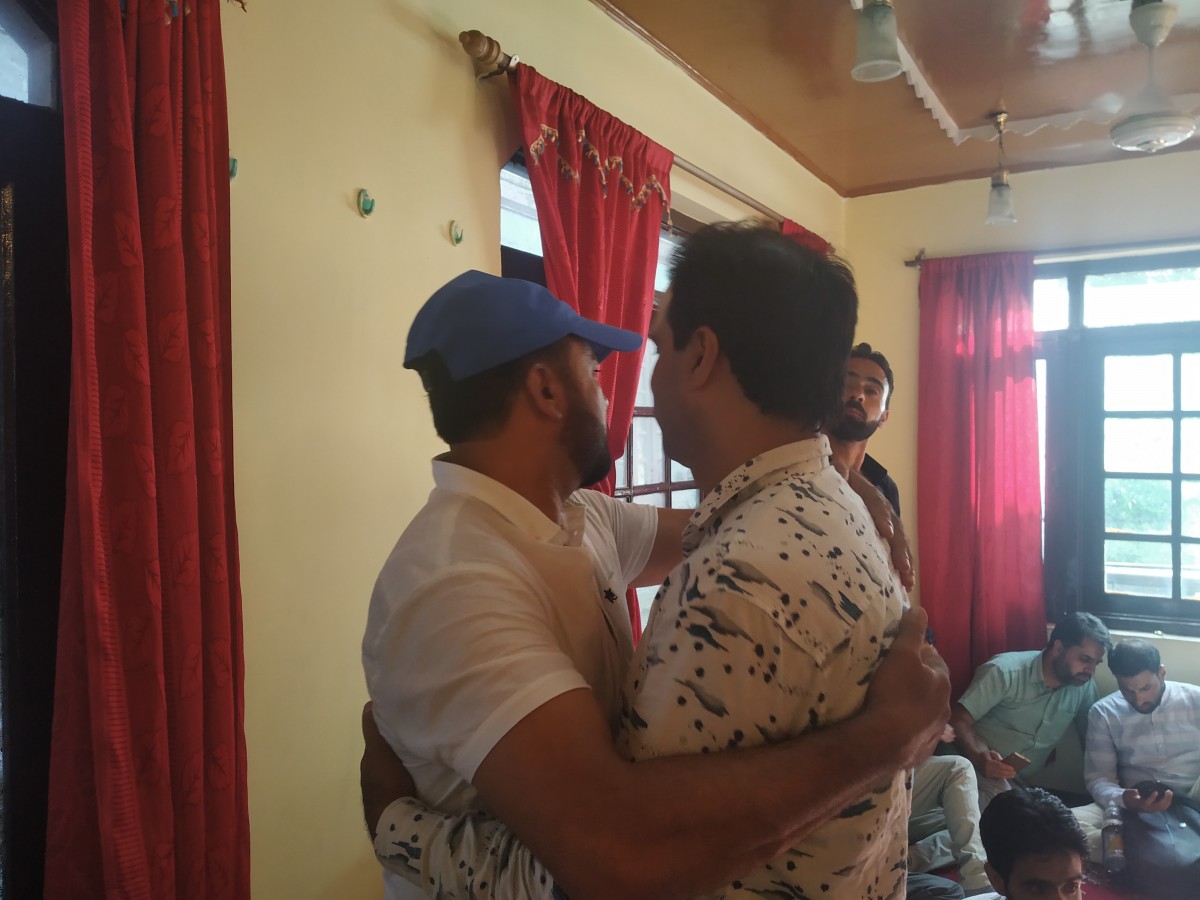 “So this is our new house,” he says, as tears streamed down his face. “I have been waiting to feel this weather again,” he added.

He sees new faces, his nephews, nieces and other relatives. “I am your childhood friend, do you recognise me?” a man says, but Mirza is unable to identify him.

Mirza says many things that he could have achieved in his life were lost during his time in jail. “I was too young to go jail; they didn’t give us any chance to prove our innocence. I am free now, but lost precious years of my life,” Mirza says. He felt, “We are born in jail and will die in jail.”

He was freed by the Delhi high court first, and then by the Rajasthan court. “We had only one hope – that of Allah. Everyone gets justice in his court,” Mirza says.

Echoing Lateef’s claim, he also says that inmates mistreated Muslims. “They usually had altercations with each other, but when it came to a Muslim, they were united,” Mirza says.

Muhammad Ali Bhat, son of Sher Ali Bhat, a resident of Rainawari in Srinagar, lost both his parents while he was in prison. He was lodged in the Tihar jail till 2014, then shifted to a jail in Jaipur. He was lodged there until July 24.

After reaching Srinagar, he drove directly to the graveyard to offer prayers to his parents. A video of him prostrating in front of his parents’ grave went viral on social media.

“I have no grudges and wouldn’t blame anyone. Not seeing my parents at home pains me a lot,” Bhat says.

“We were innocent and were framed because we were Kashmiris, and Muslims,” he says. “My family had suffered a lot because of me. Now, I want to spend the rest of my life with them,” he says.

The Lajpat Nagar blast killed 13 civilians and injured 39 others. This was followed a day later by the 1996 Dausa blast, in which six members of the militant organisation Jammu Kashmir Islamic Front were convicted.

Auqib Javeed  is a Srinagar-based Journalist and tweets at @AuqibJaveed.